Mrs. R, age 34, presented to the emergency department with new-onset headache and difficulty focusing 3 days after spending a day at an amusement park, where she rode numerous roller coasters (total number of rides unknown). She began feeling “banged up” after the first several roller-coaster rides and started to have a mild generalized headache. On her last ride of the day, she felt her brain was “shifting in her head” during the ride. After the ride, she had a sharp generalized headache, nausea, and difficulty focusing.

Mrs. R’s workup was negative, including findings of a noncontrast head CT (Figure 1). She had no focal neurologic deficits, and review of systems was negative except for headache, difficulty concentrating, and history of autosomal dominant polycystic kidney disease (ADPKD). She was discharged home and continued taking ibuprofen for pain relief. Mrs. R was instructed to follow up with a neurologist if her headaches persisted or worsened. 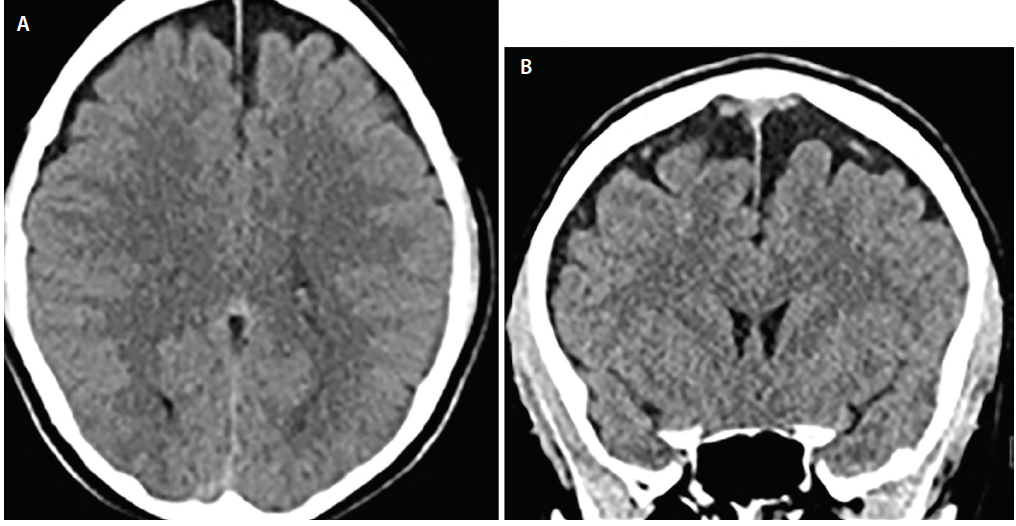 Figure 1: Noncontrast axial (A) and coronal (B) CT showed no findings.

Her headache persisted until, approximately 2 weeks later, she woke up in the middle of the night with a severe pounding headache that was notably worsening. Mrs. R then scheduled a neurology appointment for further evaluation.

On neurologic examination, 4 weeks after her headaches started, Mrs. R had no focal neurologic deficits or other findings. Review of systems was positive only for headache and difficulty focusing, but negative for photophobia, phonophobia, changes in vision, weakness, numbness, tingling, nausea, and vomiting.

Headaches are a common physical complaint, but are not life-threatening in over 99% of cases.1 The challenge is to appropriately reassure a person with benign headaches without missing the rare life-threatening causes of headache.

Trauma preceding headache is an indication for immediate evaluation for life-threatening causes of headache. Traumatic causes of headache include subdural, epidural, or parenchymal hematoma; subarachnoid hemorrhage; cerebral contusion; or depressed skull fracture. Mrs. R’s only history of potential trauma was riding roller coasters, which may not be sufficient trauma for most physicians to assess for traumatic complications. Severe intracranial injury, however, can be present after minor head trauma with an estimated rate of 7.1%.2 The Canadian CT Head Rule is a useful tool to determine if a person with minor head injury needs a CT for evaluation of potential brain injury (Box). In the absence of all risk factors, Mrs. R was graded as having a low risk for severe intracranial injury.3 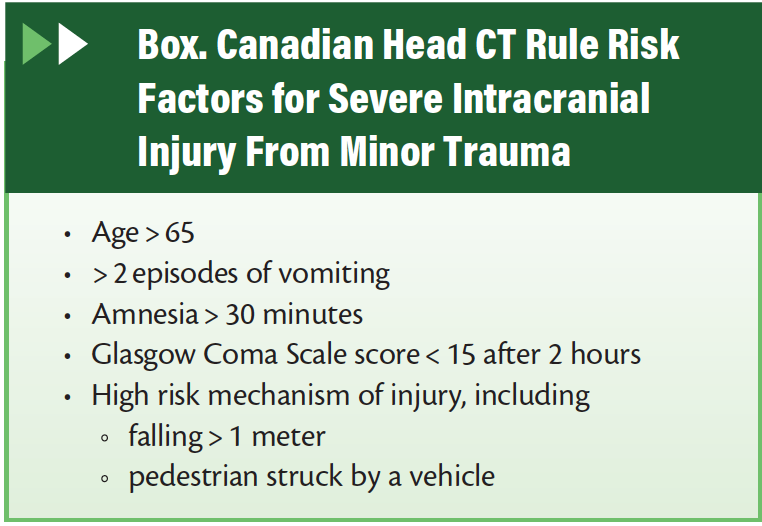 Although a roller-coaster ride may not have been sufficient to flag our patient for potential head trauma, an additional concern is her history of ADPKD, which is associated with a higher incidence of cerebral aneurysm (11.5% vs 7% in the general population).4 Mrs. R had negative findings of MR angiogram screening for cerebral aneurysm 5 years earlier.

Most commonly asymptomatic, unruptured cerebral aneurysms can, however, present with unilateral throbbing persistent headache. Diagnostic tests include CT angiogram (CTA) and MR angiography (MRA), with a sensitivity of 62% on CTA and 45% on MRA, approaching 100% for aneurysms 1 cm in diameter or larger.1

Cerebral aneurysms can rupture to cause a subarachnoid hemorrhage (SAH), which is also in the differential for Mrs. R. A ruptured cerebral aneurysm is the cause of approximately 85% of SAHs, which classically present with a severe, abrupt-onset headache.1 Recent guidelines, however, suggest that SAH may be excluded in people with an acute-onset nontraumatic headache if they are less than age 40, have no neck pain or stiffness, no loss of consciousness, no sudden-onset or thunderclap headache, and onset was not during exercise.1

Primary headache disorders, including migraine, tension-type headache, and cluster headache, can be disabling, but are not life-threatening. Migraine is among the most likely diagnosis in women under age 40, based on prevalence and, classically, consists of repeated episodes of unilateral throbbing headaches that last 4 to 72 hours with associated photophobia, phonophobia, or nausea.1

Tension headaches are usually episodic, presenting as bilateral nonpulsatile pressure or tightness that lasts minutes to days without nausea or vomiting. Mrs. R met many of these criteria, except that her headaches lasted more than several days. The acute-onset nature of her headaches, however, associated with a potential source of trauma, requires ruling out of more concerning secondary causes of headache.1

Mrs. R was evaluated for other possible causes of bleeding, including coagulopathies, rheumatologic disease, and connective tissue disease. All screening test results were negative with the exception of slightly elevated Factor 8, which is of unknown significance but would seem to make Mrs. R at higher risk of clotting vs bleeding. 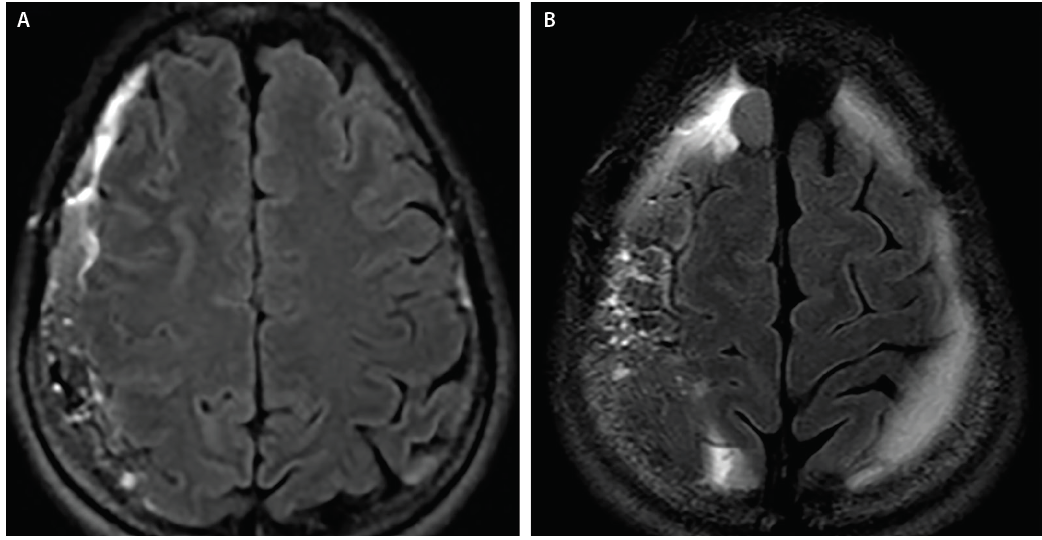 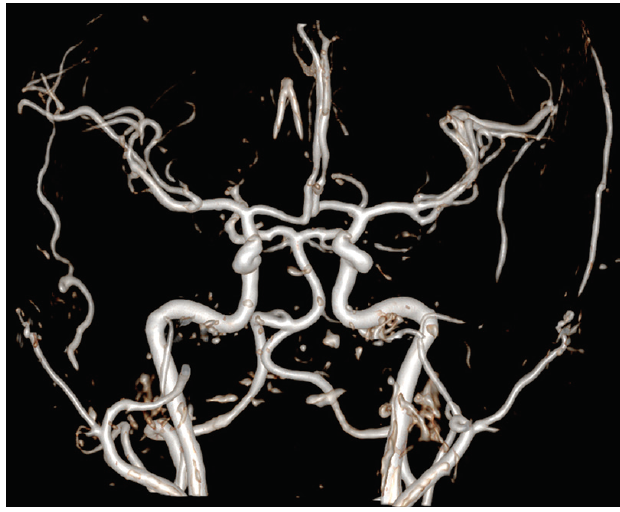 Mrs. R had bilateral subacute subdural hematomas on brain MRI 4 weeks after riding roller coasters at an amusement park. Her initial CT scan 3 days after the roller coaster trauma showed no abnormalities, but she had a persistent and worsening headache. Her presentation is consistent with a delayed subdural hematoma, which is uncommon, but has been previously reported.5

After diagnosis with bilateral subacute subdural hematomas, Mrs. R was initially instructed to return home and discontinue ibuprofen for conservative management. Weekly MRIs for follow up were planned; however, her headaches worsened after discharge, and she was admitted for further management. Decadron was started, and Mrs. R had great improvement in her symptoms. Surgical intervention (eg, bilateral burr holes) was considered but deferred because of improvement seen with steroid treatment. Mrs. R continued to improve clinically and was discharged 3 days later. Her remaining course was notable only for a brief recurrence of headache upon completion of the steroid taper that was not severe enough to warrant resuming steroids. She went on to a full recovery and has no residual effects (Figure 4). 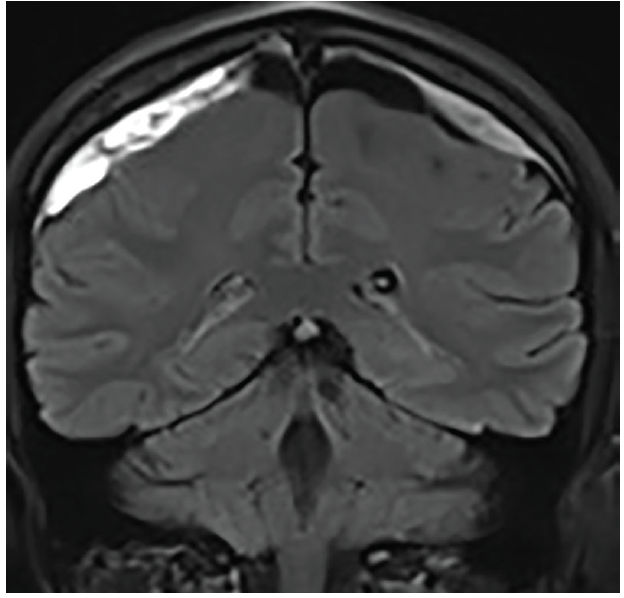 Upon literature review, we found numerous cases of serious neurologic injuries associated with riding roller coasters, including subarachnoid hemorrhage, traumatic migraine, arterial dissection, spinal cord injury, vitreous hemorrhage, and subdural hematoma. There have been 12 cases of subdural hematoma after roller-coaster rides in people age 13 to 77 years.15-24 Of these, 8 were in individuals with no prior medical history and no predisposing factors for intracranial hemorrhage. Of those with predisposing factors to intracranial hemorrhage, 3 were on long-term anticoagulants. Another had a pre-existing arachnoid cyst, discovered when the subdural hematoma after riding roller coasters was diagnosed. The 12th had recently been in a motor vehicle accident with a resulting subdural hygroma before riding the roller coaster. To our knowledge, all made a full recovery, with the exception of a 77-year-old patient on anticoagulation who died 13 days after his ride.

There are several proposed theories for why roller-coaster rides could cause serious neurologic injury, and specifically, subdural hematoma. Rotational acceleration can lead to rapid brain deformations, which can lead to brain trauma and vascular disruption.6 Studies with cadavers, measuring the amount of translational motion or acceleration required to disrupt bridging veins show that rotational acceleration, similar to that found in roller coasters, ruptured bridging veins with less force than pure translational motion.7

Recent studies have specifically explored the G-force data on roller coasters to estimate the maximum potential rotational acceleration and suggest that estimated maximum rotational acceleration is significantly lower than the threshold for bridging vein rupture.8 In a comparison of head motion among roller-coaster rides, crash simulations, and common activities (eg, coughing or pillow fights), linear and rotational components of head accelerations during roller-coaster rides were similar or milder than the common activities measured.9

Although the mechanism of injury from roller-coaster rides is not clearly understood, it is unlikely that Mrs. R’s subdural hematomas occurred purely by chance. Out of the 12 previously reported cases, 4 were women age 24 to 25 years. Of these women, only 1 had a prior known medical history (warfarin for antiphospholipid syndrome). Mrs. R did have a medical history of ADPKD; however, her vasculature did not show any evidence of aneurysm on prior brain MRA, making it less likely that her medical condition predisposed her to traumatic injury.

Delayed subdural hematomas can also occur in the setting of spontaneous intracranial hypotension. This may occur from spinal trauma, potentially a shear injury of dura from the neck being whipped around on a roller coaster. An injury to the dura can cause a cerebrospinal fluid leak leading to headache and eventual subdural hematoma.13

A woman, age 34, with a medical history of ADPKD presented with acute-onset headaches after a day of riding roller coasters at an amusement park. Initial imaging 3 days after the incident showed no abnormalities, but after persistent headaches, repeat imaging at 4 weeks showed bilateral subacute subdural hematomas. The mechanism of injury is unclear, as previously proposed theories about rotational acceleration and G-forces on roller coasters have been recently proven less likely with new studies on roller coaster head accelerations and thresholds for brain trauma.