Automated CT perfusion (CTP) has become an essential decision-making tool for thrombectomy vs medical care in acute ischemic stroke, because it can identify those outside the 4.5-hour window for use of intravenous tissue plasminogen activator (tPA) who have salvagable brain tissue and should have thrombectomy.1 Rate of tissue death varies with collateral circulation of affected brain tissue. Individuals must be differentiated into those with or without salvageable brain tissue or for whom risks of thrombectomy outweigh benefits. Recent trials have extended the treatment window substantially by showing long-lasting benefit of thrombectomy in a subset of stroke patients who present within 24 hours of symptom onset.2,3

These landmark trials used the RAPID automated CTP (iSchemaView) to quantify core infarct (irreversibly damaged) vs penumbra (potentially salvageable). Reproducible perfusion maps are critical for patient selection in this late time window, and several studies have highlighted differences among CTP systems.4,5 These studies have established RAPID as an essential building block of stroke treatment programs, specifically for people presenting more than 6 hours after symptom onset. In this context, it is important to recognize the RAPID software is only as reproducible as the raw image data it processes from each stroke center. Substantial variability in report quality is possible if local technical and physiologic factors are not taken into account. Here, we describe how RAPID generates CTP reports, describe the features of a technically adequate RAPID report, review technical acquisition parameters, and discuss findings suggesting a study is technically or physiologically suboptimal using real-world examples.

Acquisition of CTP begins with a 40-mL bolus contrast injection and a 60- to 70-second CT scan of 8 cm of brain tissue, including the main cerebral blood vessels and large areas perfused by the anterior circulation. The scan cycles every 1 to 3 seconds, capturing the entire passage of contrast through the brain. Image data is sent to RAPID, which measures the attenuation curves for all pixels within the coverage area as the bolus travels from the arteries, through the parenchymal tissue, and throughout the venous system. The RAPID program uses an automated arterial input function (AIF) selection tool to measure each pixel’s attenuation curve height, width, and arrival time, selecting pixels with early arrival time, above average height, and narrow width compared to the average. The venous output function (VOF) time attenuation curve is identified similarly, assuming a 3- to 12-second delay from the AIF, which usually locates the VOF in a posterior location, on a major deep cerebral vein or venous sinus. The algorithm next automatically corrects for motion and timing. A mathematic model called circular deconvolution is used to estimate contrast concentration within the vessels based on CT attenuation. This information is used calculate relative cerebral blood volume (CBV), mean transit time (MTT), time-to-peak concentration (Tmax), and cerebral blood flow (CBF) for each pixel.6-8 The VOF is used to correct for volume averaging. Because the artery is relatively small in caliber, it is subject to volume averaging effects and more sensitive to motion. The VOF, located on the much larger vein, is not as affected by volume averaging, and therefore can be used to correct the AIF curve. Additional corrections are made for noise, signal regularization, oscillatory artifact, and hematocrit differences between large vessels and capillaries.9-11

Once CBF, CBV, and Tmax values are calculated for all pixels, perfusion maps are generated (Figure 1).6 The perfusion maps display less than 30% of maximum CBF in pink and Tmax of more than 6 seconds in green as representations of the predicted core infarct and potentially salvageable tissue (penumbra), respectively.5,12 Consistency of CTP in predicting results is also an important factor for useful maps.6,11 Interpretation of the initial maps (CBF < 30%, Tmax > 6 seconds) is fairly straightforward. A target profile is used to determine who would benefit from thrombectomy that includes 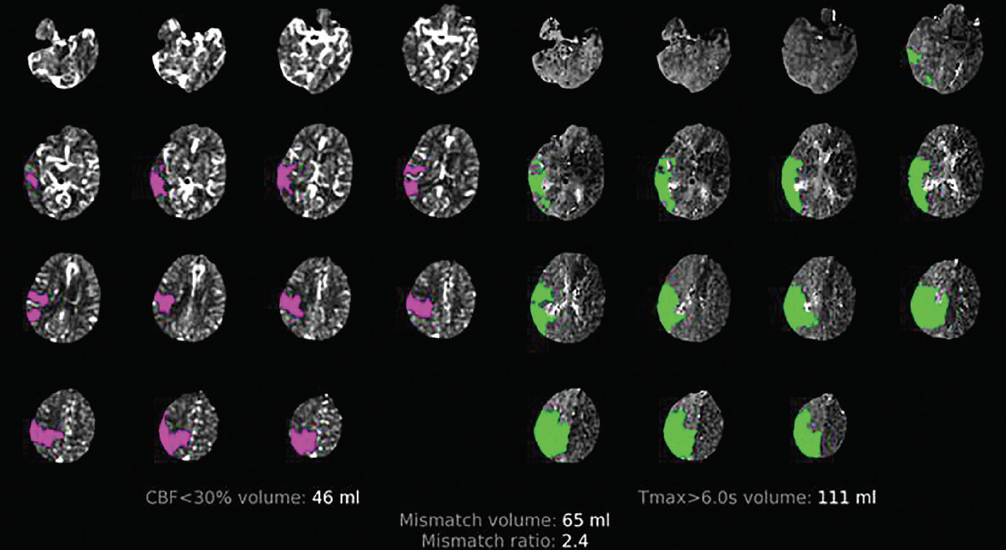 Figure 1. Perfusion Maps. The maps show unilateral perfusion deficits which correspond to patient’s exam findings of left-sided deficits. The cerebral blood flow less than 30% volume is 46 mL and time to peak concentration (Tmax)-more-than-6-second volume is 111 mL, for a mismatch ratio of 2.4. This individual likely meets the target profile of one who would benefit from mechanical thrombectomy.

If these criteria are met in a technically satisfactory study in the proper clinical context, a benefit of thrombectomy is likely.2,3,11

Specific recommendations for CTP acquisition are described in the Table.13 Key factors to consider when designing a protocol are scan order, total scan duration, frame rate, contrast injection, radiation dose, and brain coverage. Site-specific variations or flaws in the RAPID reports generated may occur when these recommendations are not followed. It is essential that clinicians interpreting the reports are able to identify pitfalls from local technical factors, which can be remedied by altering the protocol, training of staff, or coaching of patients to generate more consistent results. A starting point is to identify clinical parameters required to generate a technically satisfactory report. We have designed an evaluation checklist for CTP at our institution (Checklist) to ensure these parameters are followed. 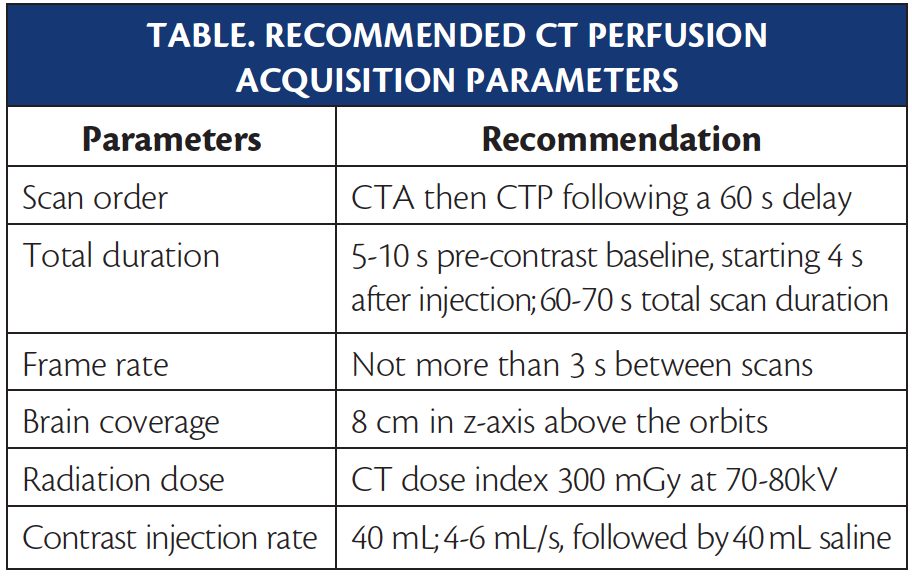 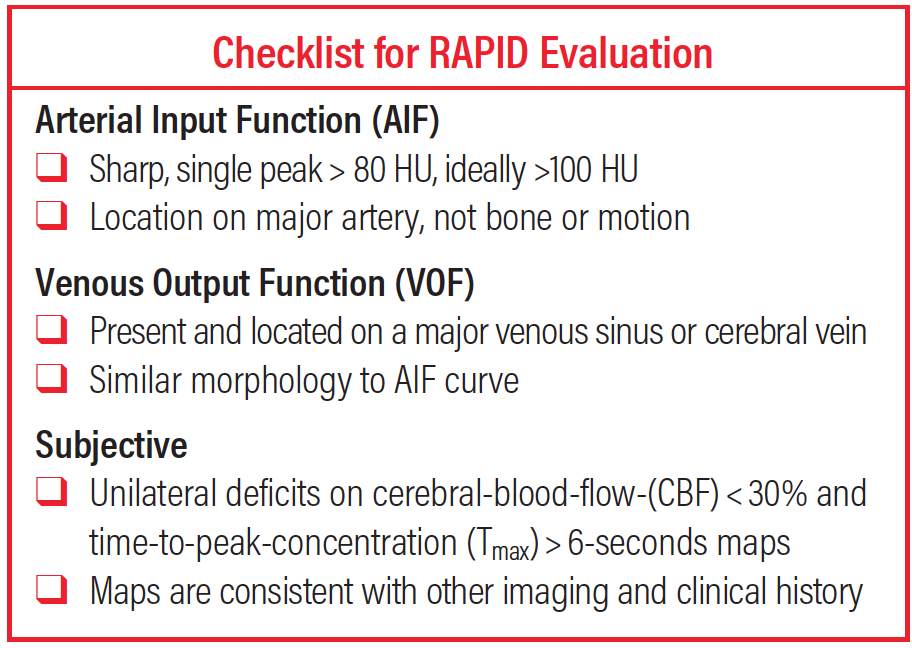 Each RAPID report contains several important pieces of technical and diagnostic information in several frames that should be evaluated by the interpreting clinician. The time-attenuation curve frame (Figure 2) contains most of the information needed to evaluate the technical quality of the report and should be evaluated first. The duration of the scan, shown on the x-axis, should capture the entire bolus delivery and transit through the brain. The curves, correspondingly, should rise briskly and fall back to baseline, with appropriate durations of pre- and postbolus acquisition, mainly to capture the entire bolus, and limit radiation exposure. 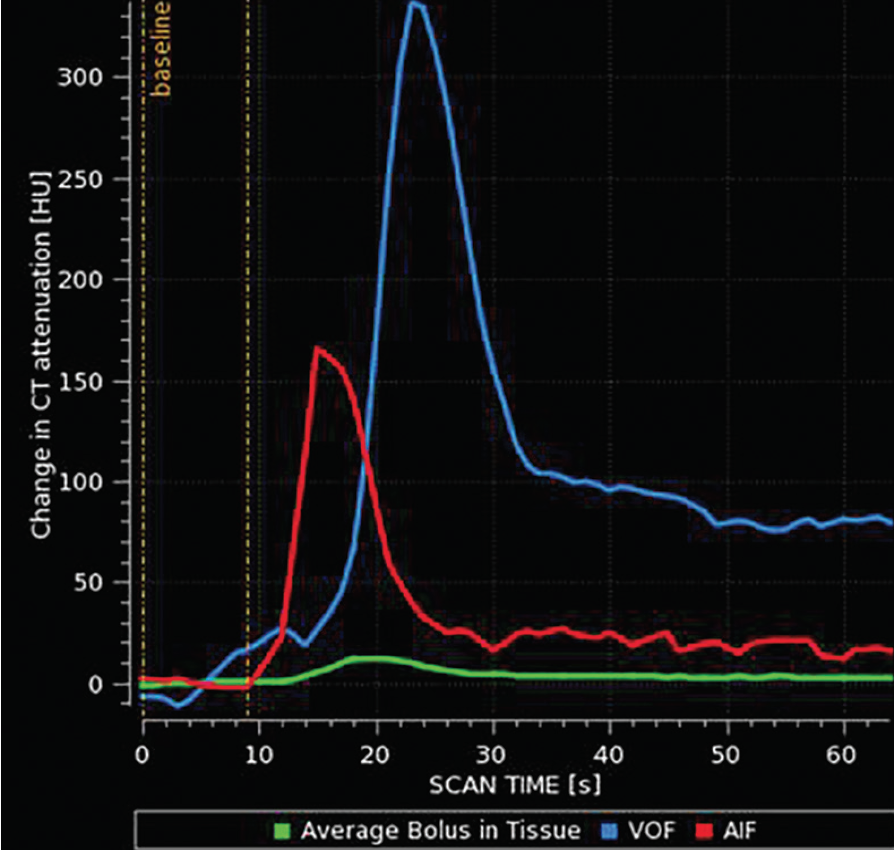 The AIF is shown in red and VOF in blue and, ideally, are sharp single peaks of more than 100 HU, as measured on the y-axis. In our institution, AIF curves with attenuation value less than 80 HU are commonly associated with several other technical flaws.14 A jagged, multi-peak AIF often indicates patient movement, which creates misregistration of the AIF onto adjacent nonarterial structures during the acquisition. Occasionally, head motion can cause a pixel’s attenuation to simulate these criteria by moving high-attenuation bone into a pixel and back out again, simulating the AIF curve. This is easily identified on the locations or bolus-time maps (Figure 3). 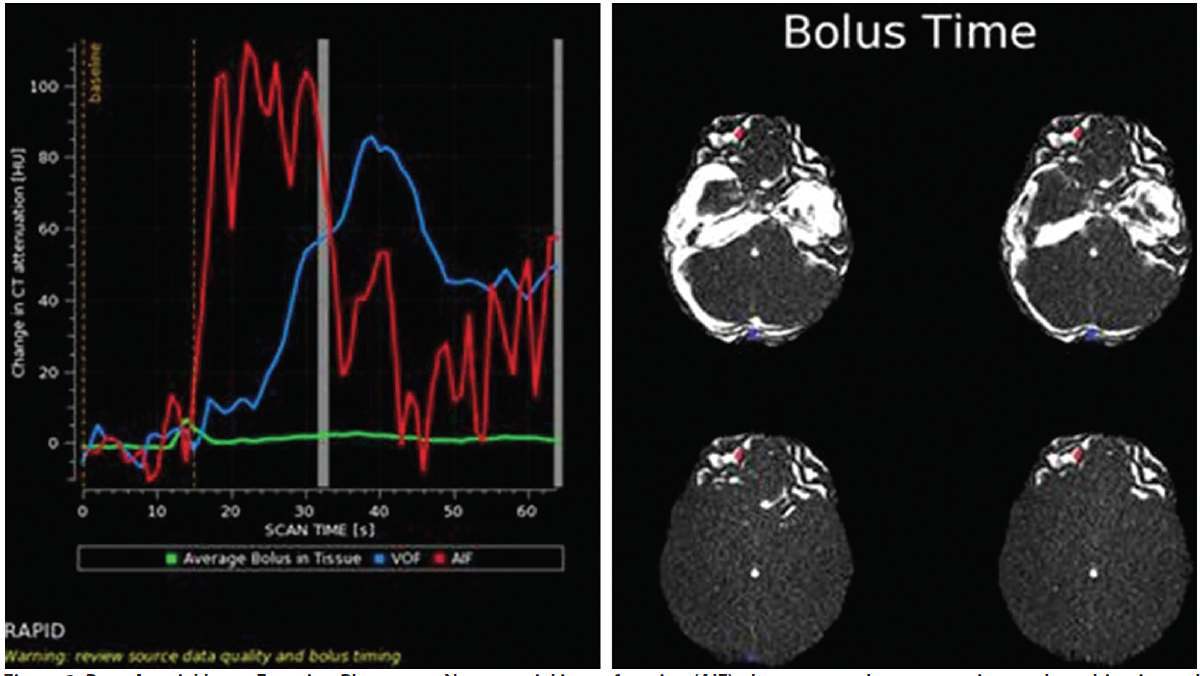 A broad, slow-rising, or low-attenuation (< 100 HU) AIF curve indicates that there was poor bolus delivery such as infiltration, poor cardiac output, or more proximal arterial stenosis or occlusion (Figure 4). 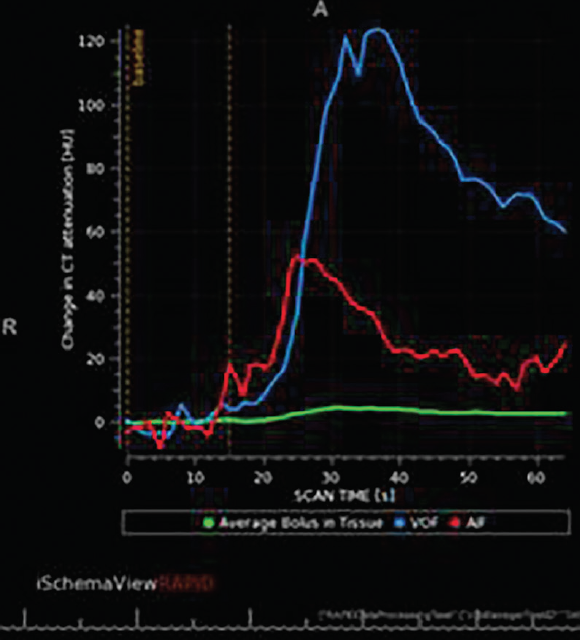 The AIF should ideally be located on a major artery, and the VOF on a cerebral vein or venous sinus (Figure 5). In practice, if the AIF or VOF are substantially misplaced because of patient movement, the curves will not meet the criteria described above. In contrast, it can usually be assumed that if the curves are acceptable, the AIF and VOF locations are likely satisfactory. In a prior experiment, however, inaccurate perfusion maps were produced with AIF placements distal to an occluded vessel, but not when placed ipsilateral and proximal to a vascular occlusion.15 This is a potential pitfall that may not be reflected in the time-attenuation curves that can still influence the report. Clinical correlation is necessary to adjust for this potential artifact. 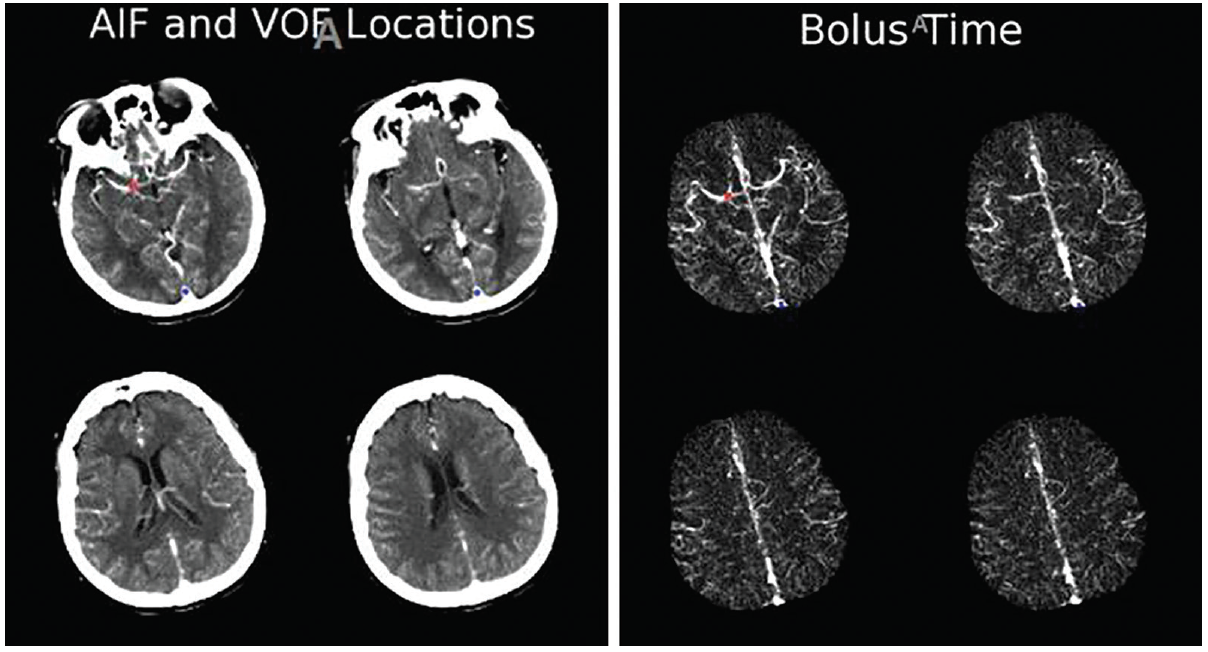 The perfusion maps display the essential diagnostic information (Figure 1), and can also be evaluated for signs of technical inadequacy. Maps should show perfusion deficits that are unilateral, and represent the predicted distribution of an infarct based on history and physical findings. At our institution, bilateral deficits on the maps of CBF less than 30% and TVmax-more-than-6-seconds were predictive of other technical flaws (Figure 6). We also found several instances of low-attenuation AIF curves (< 80 HU), which led to multiple other flaws, likely because we had used a small 30-mL contrast bolus. The low-attenuation bolus often could be identified on Tmax-more-than-6-second maps as a large diffuse deficit (Figure 7). 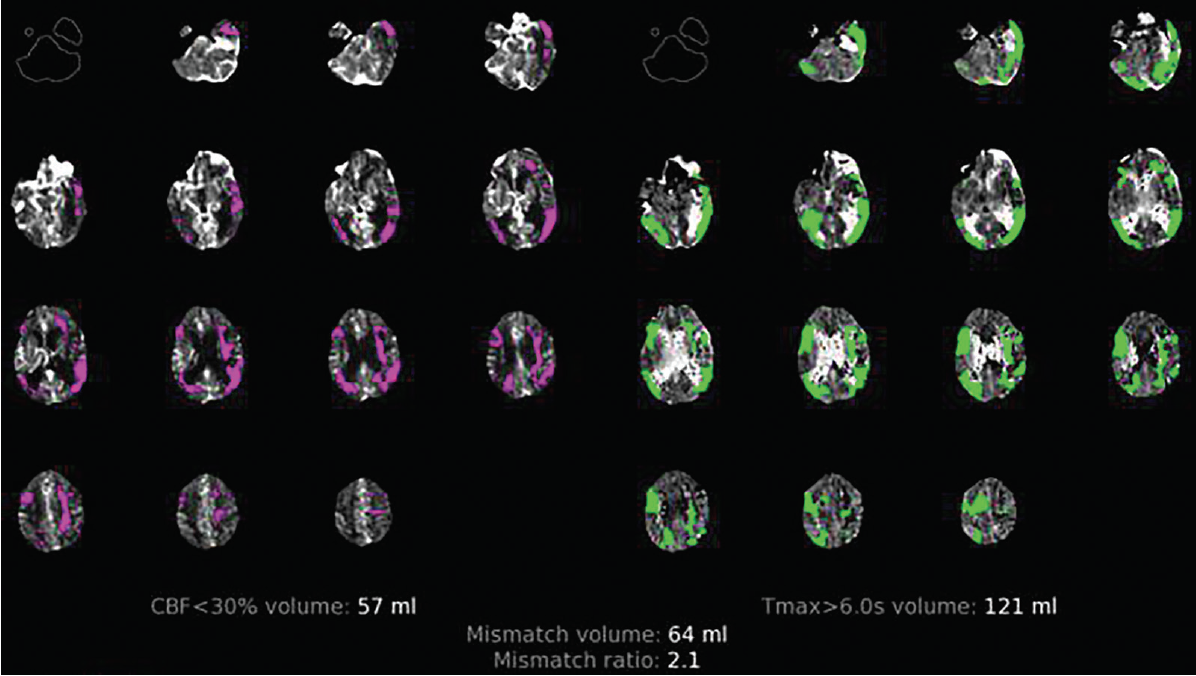 Figure 6. Bilateral Findings. Bilaterality of cerebral blood volume (CBV) and cerebral blood flow (CBF) deficits should be interpreted cautiously because they may represent a combination of clinically significant and artefactual perfusion deficits. 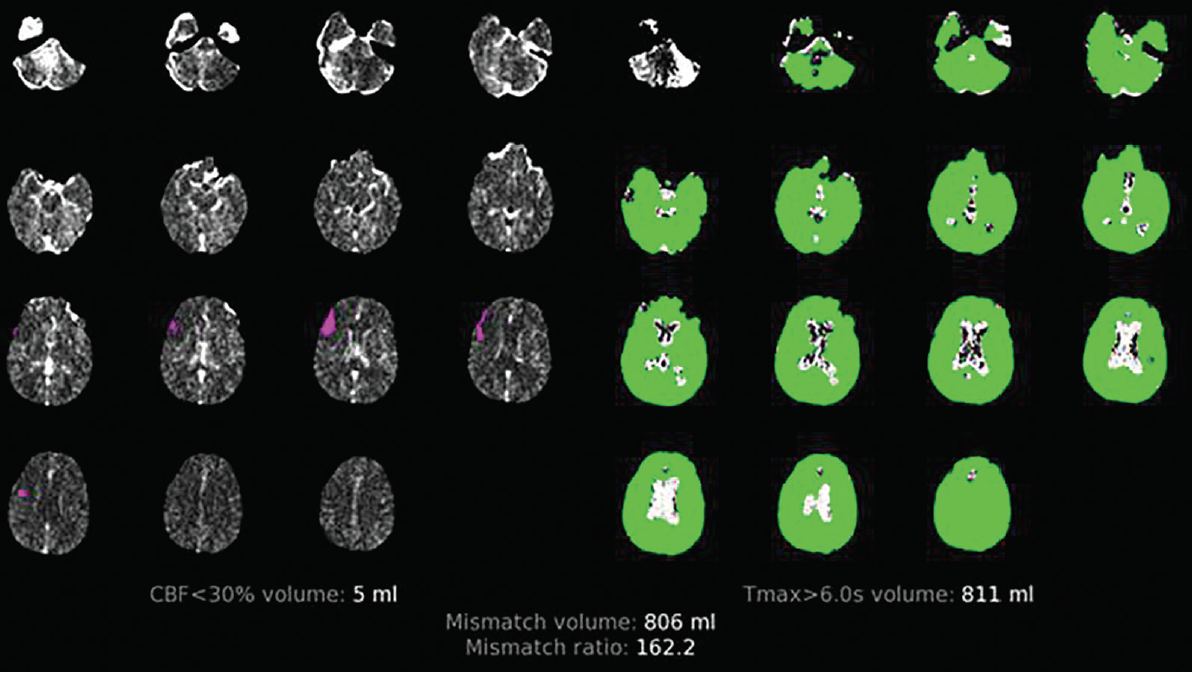 Another pitfall we encountered was absence of deficit on CBF-less-than-30% maps, even when there was an identified core infarct on the noncontrast head CT. This is thought to be secondary to the algorithm threshold for displaying core infarct. The software automatically segments and removes areas with very low CBF, such as CSF spaces and other extra-parenchymal tissue and it is possible that, in these cases, the infarct CBF was below the threshold for display on the CBF-less-than-30% maps. A final pitfall is that CTP maps often will not display an infarct, even when there is evidence of infarct on the noncontrast CT or on follow-up MRI. This is a known pitfall of perfusion imaging in which reperfusion of infarcted tissue will not be identified (Figure 8). 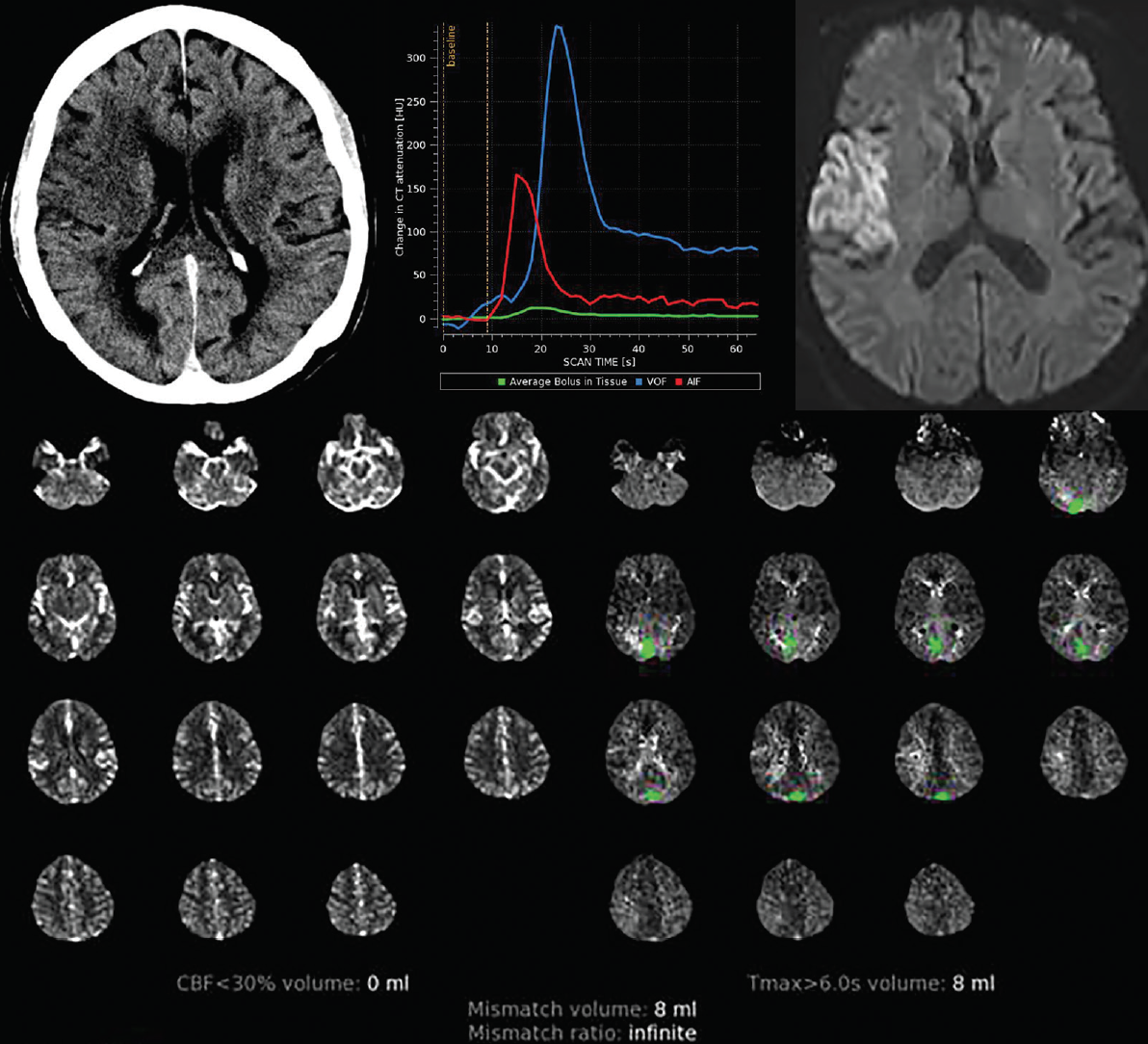 Figure 8. Reperfusion Pitfall. Left-sided deficits were present clinically and the noncontrast CT identified a large right middle cerebral artery (MCA) territory infarct (A). The patient was transferred to the stroke center, and a technically satisfactory perfusion study (B) showed no significant deficits on initial perfusion maps (D). Follow up MRI showed a completed infarct (C). This person also received intravenous tissue plasminogen activator (IV tPA) during transfer to the stroke center, and this likely represents a case of reperfusion.

In conclusion, RAPID software has been shown to be a great diagnostic tool when executed and interpreted consistently. Successful implementation at sites outside the research centers where the software was developed depends on several factors including a fundamental understanding of how the software works, controlling for technical factors, identifying technically adequate studies and those with technical flaws. These factors must be taken into account when implementing RAPID to reproduce results seen in the recent major stroke trials.

14. Laughlin B, Chan A, Dutweiler E, Iaia A, Reznikov B, Moftakhar P. Initial experience in the analysis of acute stroke utilizing RAPID at a major stroke center. Paper presented at: 57th Annual Meeting of the American Society of Neuroradiology; May 18-24, 2019; Boston, MA.

Adults Under Age 45 Are Not Aware of Common Stroke Symptoms