Traumatic brain injury (TBI) is among the most common causes of mortality in North American patients less than age 45.1 People who survive TBIs often suffer life-long physical, cognitive, emotional, and behavioral disabilities.2 Severity of TBI can be subclassified into mild, moderate, or severe, using clinical assessments, such as the Glasgow coma scale (GCS), with GCS scores of 15 to 13 representing mild injury; 12 to 9, moderate; and less than or equal to 8, severe.3

Individuals with TBI often have structural injuries with characteristic findings on neuroimaging that can be subcategorized into primary and secondary injuries. Primary injuries are damage incurred as a direct result of mechanical trauma (eg, skull fracture, parenchymal contusion). Secondary injuries are from a variety of pathologic conditions resulting from a cascade of activated molecular pathways that may continue for days after an initial insult. Secondary injury mechanisms include blood-brain barrier disruption, oxidative stress, excitotoxicity, and inflammation, which lead to pathologic states (eg, cerebral edema causing elevated intracranial pressure [ICP] and cerebral ischemia).4-8 Neuroimaging of TBI is of vital importance because it can direct care and provide prognostic information.

Both CT and MRI have proven useful for evaluating TBI, and together play an important role in triage and prognostication for people with TBIs. Noncontrast CT is the mainstay for emergent imaging in the setting of acute TBI.9 This is in part because of the widespread availability and the rapid nature of CT. Timely discovery of traumatic pathology on CT can help direct neurosurgical intervention if it is indicated. Interval CT imaging is useful to assess progression of traumatic injuries and further guide management. If vascular injury is suspected, whether arterial or venous, contrast-enhanced CT angiography (CTA) and CT venography (CTV) are the preferred studies.10; both should be considered when a high-risk injury such as a skull base or facial fracture is identified on screening CT scans.10-11

It is uncommon to obtain MRI during an initial evaluation of TBI. However, MRI is the modality of choice for prognostication of TBIs because MRI is far more sensitive at detecting nonhemorrhagic parenchymal insults and any injuries to deeper structures.12 Preferred MRI sequences in the evaluation of TBI include T1-weighted, T2, fluid attenuated inversion recovery (FLAIR)-weighted, diffusion-weighted (DWI), and susceptibility-weighted (SWI) or gradient-recalled echo (GRE) imaging. Contrast-enhanced MRI is rarely indicated for TBIs. In individuals who present for evaluation of subacute or chronic TBI, the optimal initial study is MRI.9,11

A linear skull fracture is a single fracture extending through the entire thickness of the calvarium (Figure 1A). Depending on the location, linear skull fractures may be of little clinical significance or may cause vascular complications if nearby blood vessels are injured in the process. 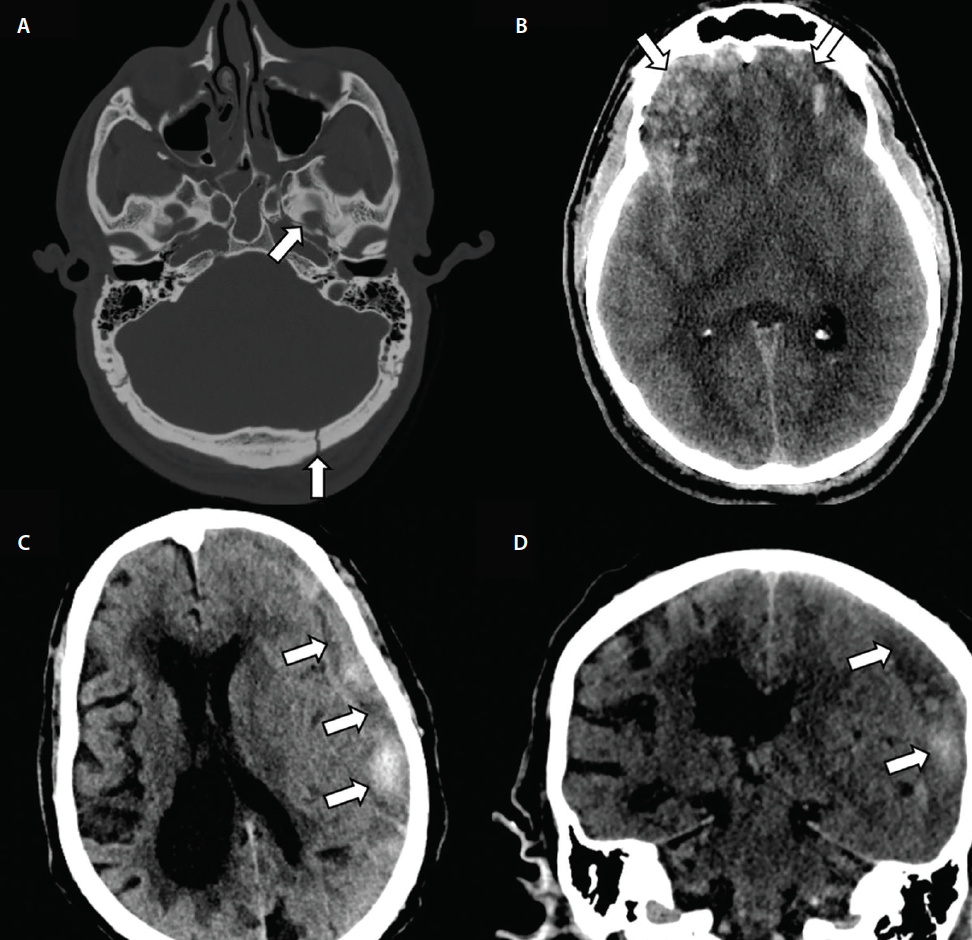 Depressed skull fractures occur when a traumatic force causes inward depression of the affected skull towards the brain parenchyma itself (Figure 2C). These fractures carry more clinical significance than linear fractures and place a person at increased risk of infection, seizures, and death.13-15 Depressed skull fractures warrant urgent neurosurgical consultation for consideration of operative management to mitigate these risks.

A basilar skull fracture involves at least 1 of the 5 bones comprising the skull base, including the temporal bone (petrous and squamous portions), ethmoid bone (cribriform plate), frontal bone (orbital plate), sphenoid bone, and occipital bone (Figure 1B). Basilar skull fractures are most often the result of trauma to the temporal bone and may cause complications such as vascular injury or cerebrospinal fluid leak.

Penetrating skull fractures result when a penetrating object, such as a bullet, pierces the skull. These often involve significant parenchymal injury in addition to the skull defect itself.

Epidural hematomas (EDHs) are blood collected in the space between the skull and dura. Classically caused by injury to the middle meningeal artery, EDHs are often associated with skull fracture in adults.16 On CT, EDHs often appear as a convex hyperdense collection that does not cross cranial sutures (Figure 2). Although uncommonly discovered in a subacute or chronic phase, an EDH may have a heterogeneous appearance with areas of low density on CT, termed the swirl sign and corresponding to hyperacute blood collection. The swirl sign is thought to be associated with higher risk of rapid expansion.17 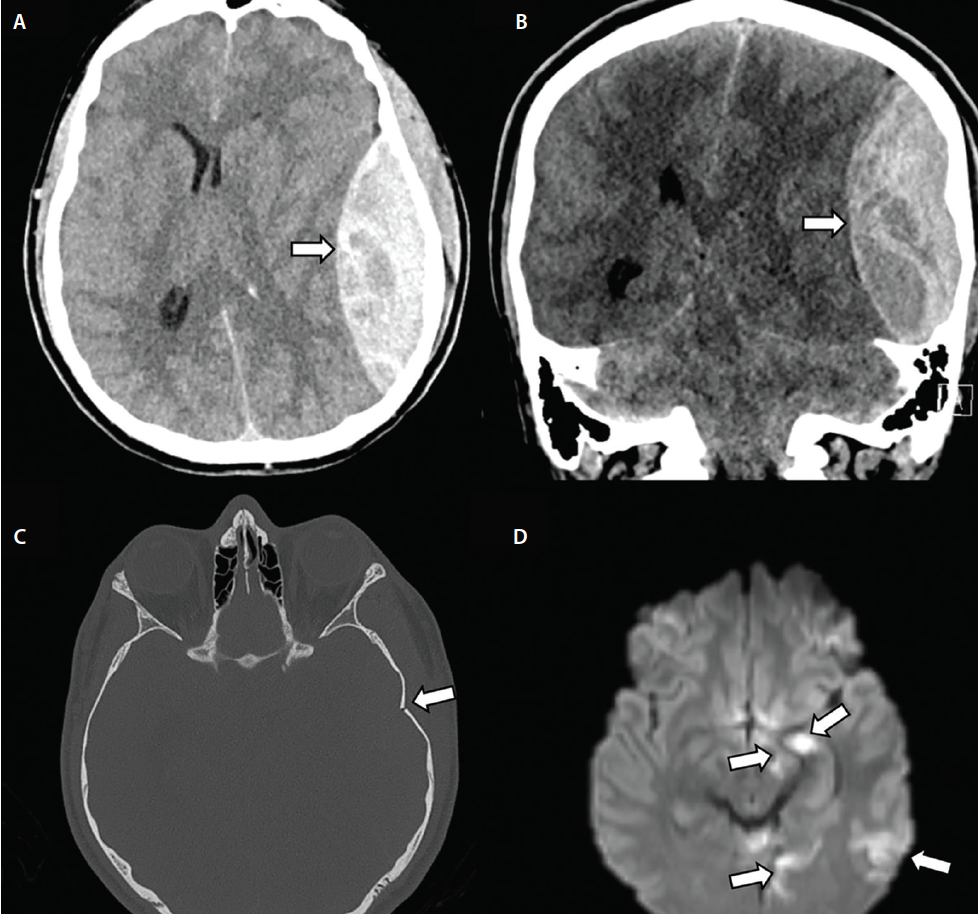 Figure 2. Figure 2. Traumatic epidural hematoma. Noncontrast CT demonstrates an acute/hyperacute left temporal epidural hemorrhage (EDH) with characteristic swirl sign (arrows, A and B) and depressed left temporal fracture (arrow, C). After craniotomy for evacuation, a noncontrast MRI was obtained and demonstrated acute and subacute infarcts (arrows, D) in the left hemisphere and brainstem secondary to compression from the large hematoma.

A subdural hematoma (SDH) is a collection of blood between the brain and the dura, typically caused by traumatic injury to the bridging veins in the subdural space.18 Often found along supratentorial convexities, SDH may also occur along the tentorium itself, the falx cerebri, and, less commonly, in the posterior fossa. On CT, a SDH classically appears as a concave-shaped hematoma crossing suture lines (Figures 1C, 1D, and 3C). Unlike EDHs, acute, subacute, and chronic SDHs are all likely to be discovered at initial imaging, depending on the clinical scenario. An SDH can appear as hyperdense, isodense, hypodense, or mixed density depending on the age of the blood within the hematoma itself. Depending on size, SDHs may cause significant mass effect with midline shift and even herniation. Large SDHs are easily identified on CT, but smaller hematomas are better identified on MRI where they will appear as extra-axial collections with T1 and T2 signal characteristics varying with the age of the bleed (Figure 3C).19 These smaller SDHs not readily apparent on CT are unlikely to be clinically significant, but MRI can accurately confirm the diagnosis and age blood products within the hematoma. 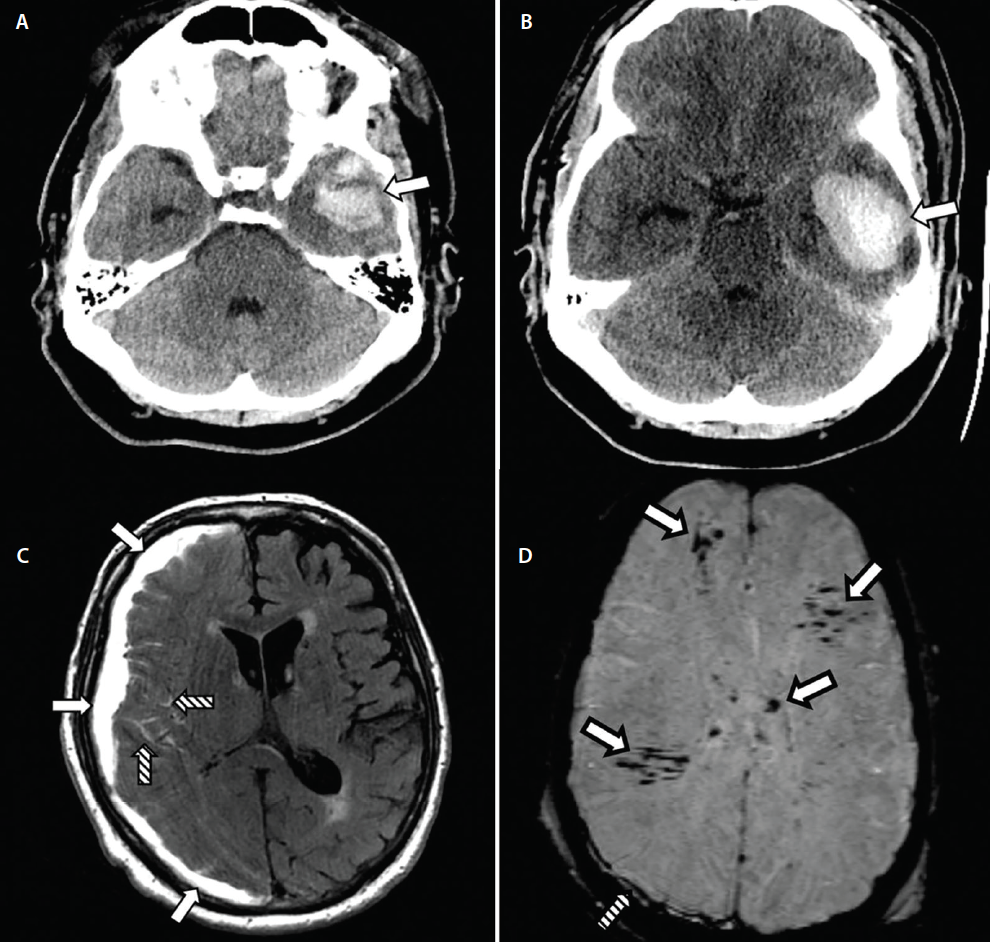 Traumatic subarachnoid hemorrhage (SAH) refers to blood products within the subarachnoid space occurring from traumatic injury to small subarachnoid vessels. Traumatic SAH is a common finding in the setting of TBI.20 Unlike aneurysmal SAHs that are typically seen in the basal cisterns and Sylvian fissures, traumatic SAHs are smaller and tend to occur primarily along cortical sulci. Acute traumatic SAHs are seen on CT as curvilinear hyperdensities. If a SAH is small, subacute, or chronic in nature, it may be difficult to identify on CT. In such cases, MRI has been shown to have superior sensitivity for identifying these hemorrhage.21,22 An SAH will appear as FLAIR and SWI signal abnormality (Figure 3C).22

Cerebral contusions are caused by forcible impact of the brain against the skull. The contusion occurs in the parenchyma and may be on the same (coup injury) or opposite (contrecoup injury) side of the trauma. Cerebral contusions are typically hemorrhagic with associated edema and appear as hyperdense foci with scattered or surrounding hypodensities on CT (Figures 1B and 3A,B).23,24 Nonhemorrhagic contusions may also occur and are better seen on MRI.24 Parenchymal contusions tend to occur in the temporal and frontal lobes and often demonstrate expansion on interval imaging.25

Diffuse axonal injury (DAI) is a primary injury to axons at the at gray- and white-matter junctions, corpus callosum, deep white matter, periventricular regions, hippocampi, and brainstem.26 Shearing forces during acceleration-deceleration injury cause DAI, which may appear as small hyperdensities on CT, although MRI is more sensitive for detecting DAI.24 Lesions of DAI typically appear as foci on SWI/GRE, FLAIR, and ADC signal abnormality within the white matter (Figure 3D). Prognostic value of MRI is high in this setting because DAI lesion burden is correlated with worse prognosis.27

Traumatic arterial dissection occurs when the intimal layer of an artery is torn, allowing blood to accumulate within the vessel wall that, in turn, causes luminal narrowing or occlusion.28 Dissections may occur in the carotid or vertebral arteries. The intracranial segments of the internal carotid arteries are at particular risk for vascular injury such as dissection, especially in the setting of skull base fractures extending into the carotid canal.10,28 Dissections are best seen on CTA and appear as luminal irregularities resulting in narrowing and often increase in the arterial wall diameter.29

Imaging is of paramount importance to the overall care of people with TBIs. In the acute setting, imaging allows for the rapid identification of life-threatening pathology to aid in triage and surgical management. Imaging findings can also guide medical management aimed at preventing or minimizing secondary injury. The prognostic value of neuroimaging promises to continue to expand as more advanced imaging techniques become validated for TBI.

The Importance of Neuroimaging