Structural neuroimaging is an important ancillary diagnostic test for dementias, and molecular imaging has increasing utility.

Alzheimer’s disease (AD) is a progressive degenerative disease primarily diagnosed by clinical examination; however, imaging can supplement the clinical examination and help exclude other possible diagnoses. Clinically, AD is characterized by a slow, gradual progression of impaired memory and cognition, including a loss of independence in activities of daily living (ADLs). Mild cognitive impairment (MCI) is a related condition that includes cognitive decline but differs from AD in that it does not affect ADLs. More than 50% of people with MCI progress to AD within 5 years.1 There are subgroups of AD based on age, clinical phenotype, and genetic profile, but for this review, all are treated as 1 entity.

Tau and amyloid proteinopathies are associated with AD, although causal relationships and the order of occurrence are hotly debated. Whether amyloid, tau, or an unknown pathology initiates the disease cascade, it is accepted that β-amyloid plaques and tau neurofibril tangles are associated with AD and likely—although at this point, unclearly—interact, to cause the neurodegeneration that results in dementia.

Nearly each of these steps can be imaged. We will start in pathologic reverse, with anatomic imaging. In vivo quantitative and subjective analyses of neurodegeneration have been available as long as cross-sectional imaging with CT and MRI. Next we review 18F-fluorodeoxyglucose positron emission tomography (18FDG-PET), which may reflect neurodegeneration and aberrant metabolism in the brain. Last, we discuss amyloid and tau PET imaging.

According to the American Academy of Neurology (AAN) guidelines, the American Psychiatric Association (APA) Diagnostic and Statistical Manual-5 (DSM-5) definition for neurocognitive disorders is reliable and should be used for diagnosis.2 The AAN recommends a complete medical history, physical examination, and neuropsychologic testing. There is good evidence to support the use of the Mini-Mental Status Examination (MMSE) as a screening tool.3 There are no genetic screening tests recommended for routine diagnostic purposes. Screening for syphilis or Creutzfeldt-Jakob disease (CJD) is only indicated if either is clinically suspected, but all patients should be screened for depression, vitamin B12 deficiency, and hypothyroidism.

Widely available anatomic imaging with CT or MRI is warranted to help exclude other diagnoses when AD is clinically suspected but is not warranted solely based on family history or genetic status. The AAN states that structural neuroimaging (eg, a noncontrast CT or MRI) is appropriate to detect lesions which may result in cognitive impairment.3 The American College of Radiology (ACR) appropriate use criteria (AUC) for dementia rate noncontrast brain MRI as “usually appropriate” (7-8 on a 9-point scale) for nearly every dementia variant, whereas CT is given a 4 to 6 rating indicating it “may be appropriate.”4 Many imaging centers have an MRI memory protocol used when imaging is ordered and would include a noncontrast brain MRI with T1- and T2- weighted images, fluid-attenuated inversion recovery (FLAIR) images, diffusion-weighted images (DWI), and gradient echo sequences (GRE). If MRI is not available, CT can be used to exclude gross anatomic abnormalities (eg, tumor, hemorrhage, or prior infarct) although many subtle findings visible on MRI will be missed with CT.

Brain MRI with T1- and T2- weighted sequences can be used for static anatomic evaluation, including relative volume loss, and excluding other anatomic causes of symptomatology (Figures 1 and 2). Characterization of atrophy is still subjective; however, and tends to follow Braak pathologic staging. In MCI and early AD, atrophy is seen primarily in the entorhinal cortex and the hippocampus.5 As AD progresses, atrophy spreads to the rest of the medial temporal lobe (MTL) including the medial temporal, parahippocampal and fusiform gyri, and the temporal pole. Eventually, atrophy progresses to the rest of the cortex, primarily the temporal, parietal, and frontal lobes, although in late-stage AD, the occipital lobe is also affected. As atrophy progresses, the cerebrospinal fluid (CSF) spaces (eg, ventricles, cerebral sulci, and cerebellar folia) enlarge. Rates of ventricle enlargement are higher in AD compared with ventricle dilation typical of normal aging.6 Lateral ventricle size also correlates with AD status and progression.7-10 Atrophy of MTL structures (eg, the hippocampus) correlate well with neuropathology found at autopsy and reliably predicts MCI conversion to AD.11,12 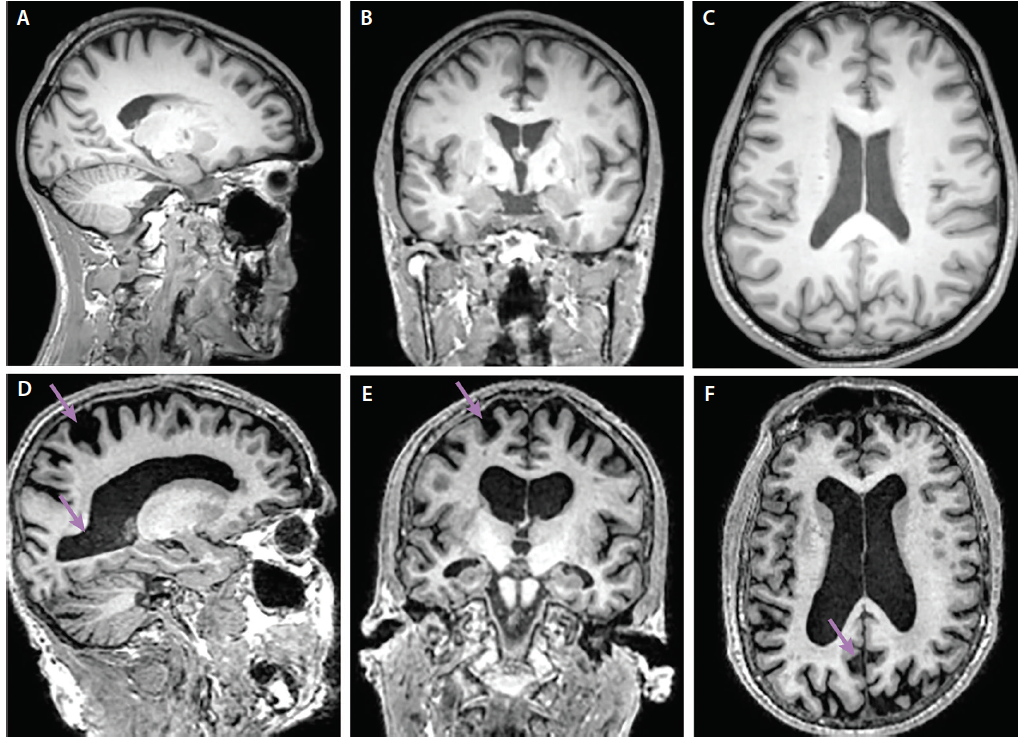 Figure 1. Typical cortical volume of healthy individual (A-C) top row compared with severe volume loss seen in a person with advanced Alzheimer’s disease (AD) with enlarged ventricles, and loss of volume in the gyri and hippocampus. 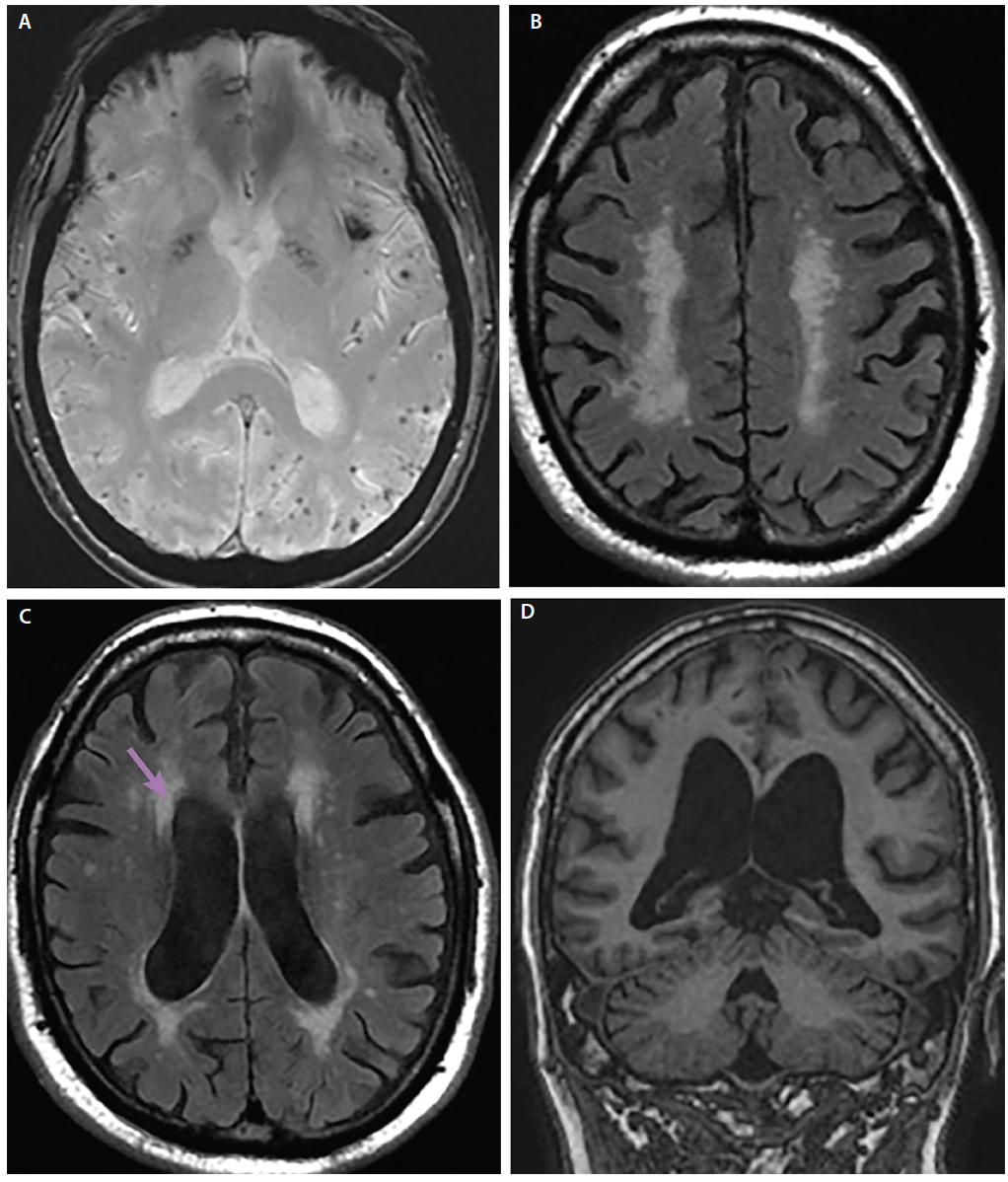 Figure 2. Amyloid angiopathy is seen with gradient echo susceptibility artifact from microhemorrhages, usually at gray-white matter junction (A). In vascular dementia and chronic microangiopathic disease is seen as confluent periventricular white matter disease (B, C). Crowding at the vertex and ventricles that are enlarged out of proportion to volume loss (D) may reflect normal-pressure hydrocephalus (NPH), although NPH is still a clinical diagnosis.

Brain MRI or CT may also help exclude other causes of dementia. In normal pressure hydrocephalus, the ventricles are enlarged out of proportion to volume loss, with crowding of the gyri at the vertices (Figure 2). The use of FLAIR imaging may suggest vascular dementia if white matter disease and lacunar infarcts out of proportion to age are present (Figure 2).

MRI and CT can also help exclude structural causes of dementia (eg, hemorrhage or tumor). The addition of DWI can evaluate for acute and chronic infarct and exclude CJD.13 Gradient echo sequences evaluate for microhemorrhages and can suggest amyloid angiopathy, which is separate but related to the amyloid of AD (Figure 2).14

In FDG PET, a radioactive fluorine replaces a hydroxyl group on a glucose molecule. Glucose is used as the preferred energy source of neurons. If neurodegeneration is present, different rates of glucose use (ie, hypometabolism) are seen on FDG-PET that can be used as a proxy for neurodegeneration.

Characteristically, in AD, hypometabolic areas are seen in the posterior cingulate cortex (PCC), precuneus, and the cortices temporal, parietal, and, subsequently, frontal.15 The Food and Drug Administration (FDA) approved FDG PET for differentiation of AD from frontotemporal dementia (FTD) because FTD has a different signature of hypometabolism in the frontal cortex, anterior temporal cortex, basal ganglia, and thalamus.16,17 The Center for Medicare and Medicaid Services (CMS) will only reimburse for FDG-PET when when the referring physician believes the patient has overlapping symtoms of AD and FTD and AAN-recommended diagnostic workup has been completed without delivering a clear diagnosis.18

There are multiple radiolabeled tracers that bind to β-amyloid plaques in vivo, a few of which have been approved by the FDA. Amyloid-PET gives a qualitative answer regarding whether or not amyloid plaques are present in the brain (Figure 3). 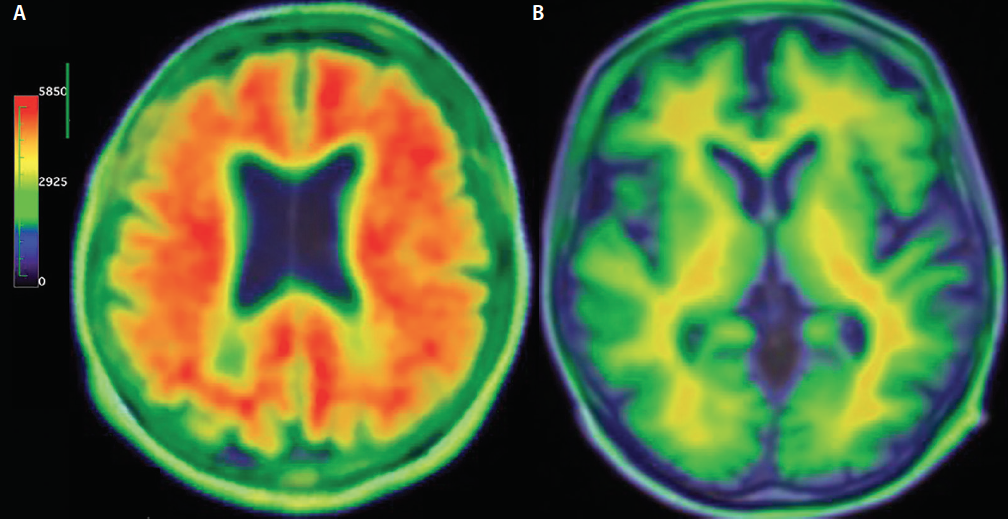 Figure 3. Amyloid-positron emission tomography (PET) results return a result are either positive (A) or negative (B) for the presence of amyloid.

These studies are not ideal for routine screening or monitoring because of cost and radiation exposure. Because of a lack of clear benefit in the absence of disease-modifying therapy for AD, amyloid-PET is not yet reimbursed by insurance companies (though a recently published study of over 11,000 people with MCI or dementia of uncertain cause showed that treatment plans changed in over 60% of subjects after amyloid PET scans, so these guidelines may change in the near future).19 The Society of Nuclear Medicine and Molecular Imaging and the Alzheimer’s Association jointly published AUC for amyloid PET as people who meet clinical tests for possible AD but have atypical presentations or those with progressive dementia who are less than age 65.20 Amyloid PET is not recommended for

Radiolabeled tracers which target specific conformations of phosphorylated tau seen in AD have recently been developed and validation is ongoing.21 According to Braak pathology staging, neurofibrillary tangles deposit in entorhinal cortex first, next in the inferior and lateral temporal lobes, and later in the parietal and occipital, and finally, in the frontal cortices.22 Tau-PET is currently used only in research, but the clinical potential is high considering that tau pathology is highly correlated with disease progression and symptoms of AD (even more so than amyloid pathology).21

Myriad advanced sequences may be added to MRI and CT studies, as per institutional preferences and current research, but are not yet validated for diagnosis. Volumetric measures of atrophy including small field-of-view thin-slice imaging of MTL to analyze fine detail of the hippocampus, which can all be assessed over time are being developed, for improving diagnosis. These could also be used for quantitative analyses of volumetric data and for tracking disease progression, which both are not validated at present. Arterial spin labeling (ASL) may be able to show perfusion differences, potentially correlated with neurodegeneration. Functional MRI (fMRI), diffusion tensor imaging (DTI), and magnetic resonance spectroscopy (MRS) are other MR sequences currently being investigated.

AD is a clinical diagnosis but structural imaging (noncontrast MRI primarily) is recommended to exclude other diagnoses and will likely be covered by insurance. The use of FDG PET is recommended and reimbursed only to differentiate AD from frontotemporal dementia. Amyloid PET scans are FDA approved, but not yet reimbursed, though this may change given recent findings. Tau PET scans have not yet been validated for clinical use. There are many new exciting molecular imaging targets and MR sequences being developed to help diagnose this disease.