Mr. L, age 34, presented to the emergency department with seizures, severe headache, fever, and chills. He had been healthy until 1 month prior when he developed fatigue, weight loss, and a progressively severe holocephalic throbbing headache prompting 2 visits to the emergency department. Mr. L’s family reported that, during this period, he appeared “cognitively dull,” repeating himself frequently and having trouble with short-term memory, although still able to work full-time as a salesman. A day before, he had an unwitnessed loss of consciousness resulting in a fall followed by confusion. Mr. L’s past medical history was significant for mild hypertension and remote depression. He lived with his girlfriend and denied toxic habits or exposures, or recent travel.

Upon admission to the hospital, Mr. L was febrile (101.3°F) and mildly encephalopathic (alert and oriented to the family at bedside, as well as to the month and year, but not to his location). He had no nuchal rigidity or focal neurologic signs on examination. Results of routine laboratory testing showed peripheral leukocytosis (21 x 103/mcL with 89% neutrophils), and elevated C-reactive protein (CRP; 11.2 mg/L). Cerebrospinal fluid (CSF) analysis revealed marked lymphocyte-predominant pleocytosis (401 leukocytes/mL, 68% lymphocytes, 6% neutrophils), elevated protein (94 mg/dL), and normal glucose. Results of a meningoencephalitis CSF panel were negative, and extensive infectious workup to evaluate for bacterial, mycobacterial, viral, fungal, and spirochetal infections were unrevealing. A CSF sample was sent to be tested for autoimmune encephalitis; however, the result was not available until after Mr. L’s discharge. Brain MRI findings showed a small region of right temporal lobe enhancement with leptomeningeal enhancement and cortical edema as well as ill-defined enhancement along the upper brainstem (Figure 1). Prolonged videoEEG results revealed right temporal slowing without epileptiform activity. 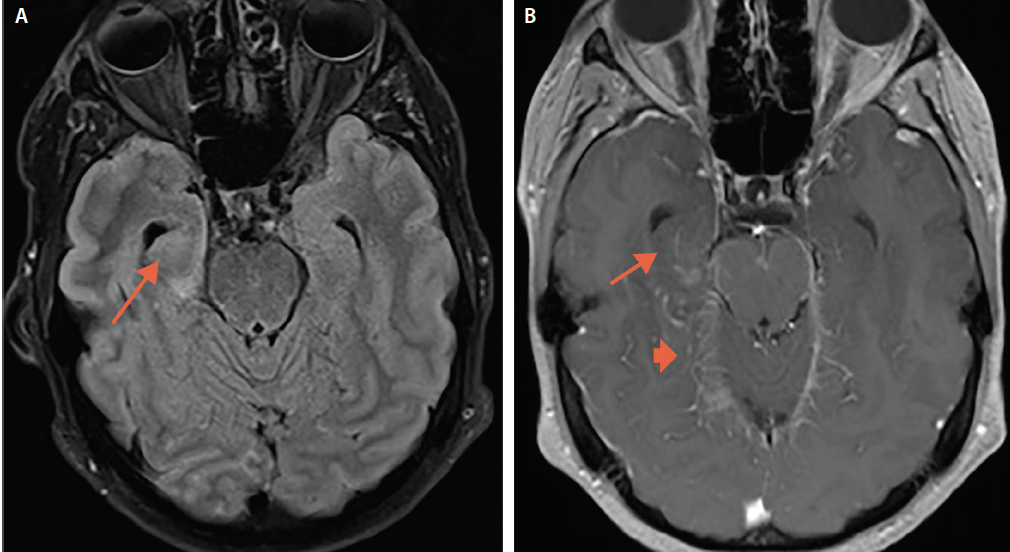 Figure 1. Brain MRI from Mr. L’s initial hospitalization with increased signal intensity in the right mesial temporal lobe (A), and enhancement of the temporal lesion (B) (small arrow) with leptomeningeal enhancement (large arrow).

Mr. L was diagnosed with presumed infectious meningoencephalitis and started on vancomycin, aztreonam, and intravenous acyclovir. He remained persistently febrile and mildly encephalopathic, with leukocytosis, which prompted broadening of antibiotic coverage to include meropenem and doxycycline. Thereafter, Mr. L began to demonstrate clinical improvement with resolution of fever and encephalopathy. He was discharged from the hospital and completed the full course of doxycycline and acyclovir at home. After discharge, results of Mr. L’s CSF autoimmune encephalitis panel were returned and were positive for antibodies to the N-methyl-D-aspartate receptor (NMDAR) with a titer of 1:80 (normal < 1:1, ARUP Laboratories, Salt Lake City UT). Serum NMDAR antibody titer was negative, however. The clinical relevance of this CSF result was unclear in light of Mr. L’s clinical improvement with antimicrobial treatment.

During a scheduled follow-up visit to the neurology clinic 3 weeks after discharge, Mr. L reported new symptoms: bilateral blurred vision, numbness on the left side of his face and tongue, loss of taste on the left side of his tongue, and recurrence of headache. On fundoscopic examination, optic nerve swelling was seen bilaterally, more on the right than on the left. Mr. L was referred to the emergency department and readmitted to the neurology service. Upon admission, he was afebrile, hemodynamically stable, and had a normal mental status examination. Significant findings of his neurologic examination included an area of central scotoma in the right eye, visual acuity 20/800 on the right and 20/40 on the left, horizontal diplopia with nystagmus on both right and left end gaze, diminished sensation in the left V3 distribution, and global pathologic hyperreflexia with preserved strength. Repeat CSF analysis results showed elevated opening pressure of 23 cm H2O, normal cell count and glucose, persistently elevated protein (94 mg/dL), and a negative meningoencephalitis panel. Brain MRI findings showed new, irregularly enhancing lesions in the posterior mesial temporal lobes, subcortical cerebral hemispheres, bilateral middle cerebellar peduncles and left cerebellum, as well as enhancement of the optic nerves and optic nerve sheathes bilaterally (Figure 2A-C). Spine MRI revealed small enhancing lesions in the cervical and thoracic spinal cord (Figure 2D). 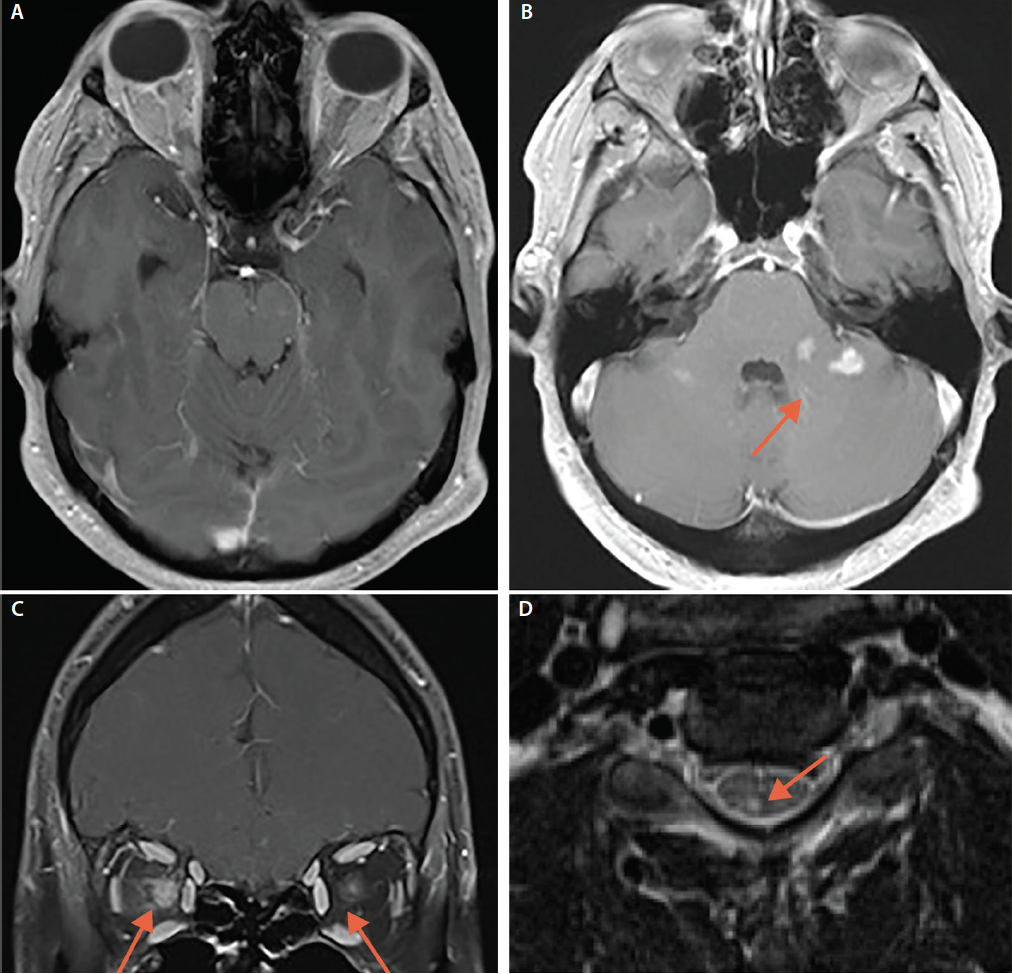 Figure 2. Brain MRI from Mr. L’s second hospitalization demonstrates resolution of the previously visualized right temporal lesion and leptomeningeal enhancement (A), with new enhancing lesions both infra- (B) and supratentorially (C), bilateral optic neuritis with greater enhancement in the right optic nerve compared with the left (white arrows) (B), and an enhancing lesion in the spinal cord (D).

In light of Mr. L’s positive findings for antibodies against NMDAR in his CSF from the prior admission, he was asked about psychiatric symptoms. He acknowledged that before and during his initial hospitalization he had formed visual and auditory hallucinations, such as a woman grabbing his leg and attempting to lead him out of the room. He did not report these symptoms to the medical team at the time because of paranoid delusion that the medical team was attempting to keep him hospitalized against his will. Retesting of Mr. L’s original CSF sample by Mayo Clinic Laboratories for NMDAR antibodies returned a positive titer of 1:256 (normal < 1:2).

In retrospect, Mr. L’s history of prodromal headache, personality changes, cognitive deficits, paranoid delusions, and hallucinations during the weeks leading up to his initial admission were consistent with the diagnosis of NMDAR encephalitis. He was started on a 5-day course of methylprednisolone 1 g daily and intravenous immunoglobulin (IVIG) 2 g/kg over 3 days. After just 1 day of steroid treatment, he began to demonstrate improvement in visual acuity, to 20/70 in the right eye and 20/20 in the left eye, as well as improvement in sensory deficits. Upon completion of the steroid course, Mr. L’s visual acuity was normal. He reported the resolution of psychiatric symptoms but continued to endorse abnormal taste and subjective cognitive deficits. After steroid treatment, Mr. L’s, brain and spine MRI findings demonstrated resolution of enhancement and significant diminution in the size of brain lesions and stability of the spine lesions. Findings of testicular ultrasound and CTs of the chest, abdomen, and pelvis to evaluate for occult malignancy were unremarkable.

Given the development of bilateral optic neuritis and large number of inflammatory-appearing lesions in the brain and spinal cord, Mr. L was tested for aquaporin 4 (AQP4) antibody, which was negative, and myelin oligodendrocyte (MOG) antibody, which was positive at 1:100 (normal < 1:20, Mayo Clinic Laboratories, Rochester, MN).

Mr. L was diagnosed with overlapping MOG-antibody syndrome associated with NMDAR encephalitis. He was discharged home on oral prednisone, which was tapered over 2 months, and started on rituximab 1 g intravenously (IV) given in 2 doses, 2 weeks apart, 1 month after discharge. Mr. L’s repeat MRI at 3 months showed a further decrease in size or complete resolution of previously visualized lesions (Figure 3). At his 6-month follow-up visit, his neurologic examination was normal. The detailed neuropsychologic assessment showed expected levels of functioning across most cognitive domains with mild deficits in attention, aspects of executive functioning, and nonverbal memory. Mr. L continues to undergo adjustments to antiepileptic drugs because 6 months after discharge his ambulatory 72-hour EEG showed 3 electrographic seizures without clinical correlates. He has returned to full-time work.

Figure 3. The widespread enhancing lesions (A) present during Mr. L’s second hospitalization had resolved on repeat scan 3 months later after IVIG and steroids (B).

We discuss a challenging case of meningoencephalitis presumed to be infectious but subsequently diagnosed as NMDAR encephalitis with evolution to MOG antibody-associated overlap demyelinating disease. The neurologic symptoms resolved after treatment with IV steroids, IVIG, and rituximab.

NMDAR encephalitis is an autoimmune disorder associated with IgG antibodies to the GluN1 subunit of the NMDAR.1 It typically presents with encephalopathy and seizures; psychosis may be a prominent feature early in the disease course, especially in adults.2 All of these clinical features were seen in Mr. L, who met clinical criteria for definite NMDAR encephalitis.3

Recently proposed diagnostic criteria for antiNMDAR encephalitis3 require symptom evolution in less than 3 months with at least 4 of the 6 following symptom:

The findings of NMDAR antibodies in CSF, or serum with confirmatory testing, is required for a definite diagnosis. Supportive criteria include abnormal EEG or CSF with pleocytosis or oligoclonal bands. Other disorders—most importantly, infectious causes—must be reasonably excluded.3

Diagnosis of autoimmune encephalitis is often challenging, because the clinical presentation of high fever and encephalopathy, along with CSF findings of lymphocytic pleocytosis (in 58% of NMDAR encephalitis cases), elevated protein (in 18%), and an elevated opening pressure (in 40%)4 suggest an infectious cause.5 A high index of suspicion is required to expand the encephalitis workup to include autoimmune causes. The gold standard for diagnosis of NMDAR encephalitis is positive CSF NMDAR antibody titers in the appropriate clinical context,4 but results are usually only available after a delay of weeks. A commercially available CSF assay for NMDAR antibodies had 100% sensitivity and 100% specificity in a study of 250 participants with clinically definite NMDAR encephalitis and 100 healthy participants.6 Serum testing for antiNMDAR antibody is less reliable, returning a positive result in only 63% to 86% of patients who meet criteria for NMDAR encephalitis.4,6

In practice, it seems prudent to test for the common autoimmune encephalitis antibodies in CSF of anyone with encephalitis and negative infectious serologies. Positive NMDAR titers in CSF should prompt consideration of treatment with steroids and IVIG even in those who appear to be improving.6 High-level evidence for the treatment of NMDAR encephalitis is lacking. The widely-accepted practice is to initiate IV steroids, followed by IVIG or plasma exchange, followed by rituximab or cyclophosphamide if clinical response is suboptimal or there is a recurrence of symptoms.3 Rituximab, in particular, is becoming an increasingly popular treatment option early in the disease course.7,8 Removal of any tumor present is also recommended. Early initiation of therapy correlates with better clinical outcomes.9

Only 35% of people with NMDAR encephalitis have abnormal findings on brain MRI at disease onset, and just 50% of patients demonstrate T2-hyperintense lesions at any point in the disease course.1 The possibility of coexisting autoimmune conditions, including overlap demyelinating syndrome, must be considered when someone develops optic neuritis, new focal neurologic symptoms, and inflammatory-appearing lesions in the optic nerve, brain, or spinal cord. 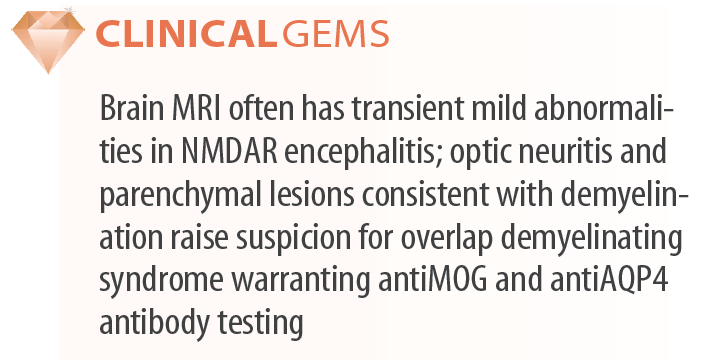 Approximately half of NMDAR encephalitis cases in women are paraneoplastic, most commonly associated with ovarian teratomas. Malignancy is very rare, however, in people with overlap syndrome.10 NMDAR encephalitis may also be triggered by systemic infection (eg, Epstein-Barr virus, mycoplasma, or herpes simplex virus)11-14 or follow herpes encephalitis.9 However, our patient, Mr. L, had no systemic or CNS infection identified, despite extensive workup, and his malignancy evaluation findings were negative. Response to antibiotics early in his disease course need not necessarily be interpreted as evidence of infection. Clinical improvement may have been secondary to the anti-inflammatory effects of the antibiotics, in particular, doxycycline, which has been used for the treatment of various autoimmune disorders and demonstrated anti-inflammatory activity in CNS in mouse models.12,13

NMDAR encephalitis and subsequent demyelinating-inflammatory disorder of CNS comprise ‘overlap demyelinating disease’. This emerging entity should be considered in the appropriate clinical context, especially as it is often highly responsive to steroids and immunomodulatory therapy. Overlap syndrome may require long-term immunosuppression, but the duration of treatment is currently not known.