It is essential to be familiar with advanced MRI—perfusion, diffusion, spectroscopy, and susceptibility—for diagnosis of brain tumors.

The days of relying solely on contrast-enhancement for the work up of brain tumors have passed and it is essential that today’s neurologist be familiar with advanced imaging including perfusion, diffusion and diffusion tensor imaging (DTI), spectroscopy, and susceptibility imaging. In this article, we provide an overview of these advanced noninvasive imaging techniques.

Perfusion imaging is based on cerebral microvascular perfusion, and has had significant effects on the diagnosis, treatment, and follow-up of central nervous system (CNS) tumors. Dynamic susceptibility contrast (DSC)-, dynamic contrast-enhanced (DCE)-, and arterial spin labeling (ASL)-perfusion MRI are available.

Technical Parameters. In DSC-MRI, gadolinium contrast is injected and initially remains within cerebral microvessels, creating paramagnetic fields around the vessels. On T2-weighted MRI, this appears as a susceptibility-induced signal loss. By rapidly obtaining a series of gradient or spin echo images after contrast injection, signal intensity can be measured as a function of time to fit it to a mathematical model of hemodynamic measures.1 Relative cerebral blood volume (rCBV), cerebral blood flow (rCBF), mean transit time (MTT), and leakage maps can be created with this data.1,2 Peak height (PH) and percentage signal recovery (PSR) are other parameters obtained from DSC-MRI.

Clinical Use. Use of DSC-MRI can help distinguish a tumor from a pseudomass, (eg, abscess or tumefactive multiple sclerosis), which does not show significant elevations in perfusion parameters or may actually have decreased perfusion. This determination can help prevent unnecessary craniotomy and biopsy. If a tumor is present, DSC-MRI perfusion can characterize tumor angiogenesis and vascularity for tumor grading and assist with stereotactic-guidance biopsy, surgical planning, prognosis, biologic activity, differentiating radiation necrosis from recurrent tumors, and assessing therapeutic response.3 Grade IV gliomas have higher rCBV values compared with tumefactive demyelination, although this is not as diagnostic for low grade gliomas (grade II or III) versus demyelination.4

Gliomas can be distinguished from metastasis and lymphoma with DSC-MRI because gliomas have more angiogenesis, such that rCBV is usually higher in high-grade glioma vs lymphoma or metastasis.5,6 Because high-grade glimoas, (eg, glioblastome multiforme [GBM]) are infiltrative, in areas of peritumoral edema, rCBV is usually higher compared with peritumoral edema of metastases or lymphoma.6 Lymphoma also has the hallmark of pronounced leakage curves on DSC-MRI.

It has also been reported that rCBV is elevated in recurrent high-grade glioma or recurrent metastases but not in radiation necrosis and pseudoprogression.7 Although pseudoprogression demonstrates lower PH and higher PSR,8,9 it has overlapping rCBV values with recurrent tumor because it is a mix of viable tumor and radiation-induced changes, therefore this distinction can be difficult using only rCBV.7,8

There is a positive correlation between rCBV and glioma grade as well as biologic activity; rCBV is usually elevated in grade 3 and higher in grade 4 (Figure 1).6,9 Adjuvant radiation therapy or chemotherapy is usually done only after resection of high-grade gliomas, DSC-MRI is an important approach to treatment decision making in addition to a histopathologic assessment of gliomas. The DSC-MRI perfusion images can also guide biopsy targeting the portion of a heterogeneous tumor with highest rCBV, which reflects the highest-grade tumor regions. Such targeting may decrease the chances of undergrading gliomas.10,11

Technical Parameters. Intravenous contrast is injected for DCE-MRI imaging; however repeated T1-weighted sequences are used to obtain a series of images not only from the first pass of contrast but also as gadolinium contrast accumulates in extracellular spaces. When DCE-MRI and DSC-MRI are both done, the former is usually performed first so that the gadolinium administered also functions as a preload dose.

Clinical Uses. The primary measure derived from DCE-MRI is the volume transfer constant—a measure of capillary permeability (Ktrans).1,12 The Ktrans positively correlates with glioma grade because capillary permeability increases in higher grade gliomas.13,14 Recurrent tumor can be distinguished from delayed radiation necrosis with DCE-MRI because Ktrans is higher in recurrent tumor than in delayed radiation necrosis.15 Postprocessing of DCE-MRI perfusion is more intensive than DSC-MRI and, as a result, is used less often in routine clinical practice.

Technical Parameters. Contrast is not needed for ASL perfusion studies and is a relatively fast noninvasive sequence. The ability to measure perfusion without contrast makes ASL advantageous in certain populations including children, people with renal insufficiency, contrast allergy, or those for whom IV access is difficult or need multiple follow-up exams. Perfusion is measured by the continuous diffusion of labeled water into cells and the interstitium. Control images are acquired first, without labeling pulses. Next, labeling pulses are administered to inflowing blood proximal to the area of imaging. The difference between the control and labeled images is then measured.1 There are 4 types of ASL differing mainly in the magnetic labeling process used (ie, continuous, pseudocontinuous, pulsed, or velocity-selective).16 An advantage of ASL is that CBF quantification is not affected by T1 and T2 leakage effects with blood-brain barrier disruption. It is also less prone to susceptibility artifact compared with DSC perfusion, which uses gradient imaging. Whereas DSC-MRI provides only relative CBF measurements, ASL can actually provide a numeric CBF value that can be tracked over time.

Clinical Uses. Measurement of CBF with ASL perfusion imaging is used for tumor diagnosis, grading, follow up, and treatment. Hypo- or hyperperfusion can be identified and enables a comparison between multiple measurements in a longitudinal manner. For detecting tumors (eg, gliomas, metastases, and meningioma), ASL can be as accurate as DSC-MRI (Figures 1 and 2).17,18 Pulsed arterial spin labeling (PASL) technique can differentiate hemangioblastomas from metastatic tumors and pilomyxoid astrocytomas from pilocytic astrocytomas.19,20 Because primary central nervous system lymphomas (PCNSLs) have decreased perfusion, these can also be distinguished from glioblastoma with ASL.21 High- and low-grade gliomas can be distinguished with perfusion quantification with continuous arterial spin labeling (CASL) and PASL,22 and perfusion in high-grade tumors can be measured before and after treatment to assess response to treatment and progression. For distinguishing radiotherapy-induced necrosis from high-grade glioma recurrence, ASL is reported to be more effective than DSC (sensitivity > 90 %).23

Limitations and Pitfalls. Disadvantages of ASL include the low signal-to-noise ratio relative to DSC-MRI, such that clinically useful ASL requires 3 T or stronger MRI.1 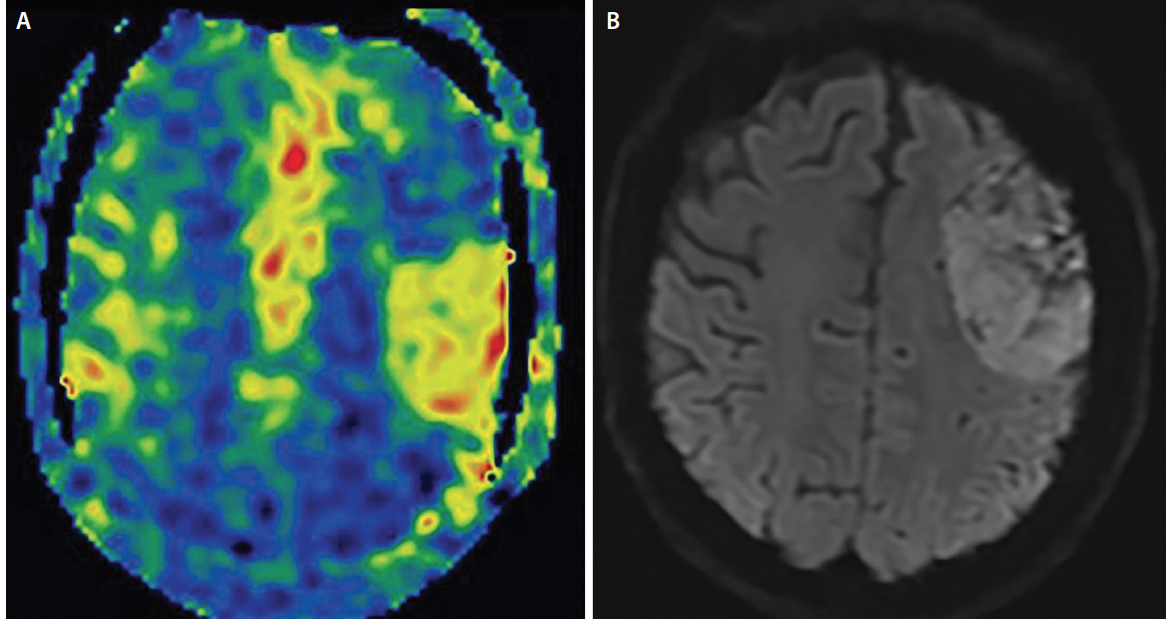 Figure 2. ASL map (A) demonstrates elevated cerebral blood flow (CBF) in a left parietal lobe meningioma, which is a hypervascular tumor. With an axial diffusion sequence (B), the meningioma appears as a homogenous restricted diffusion reflecting relative uniform hypercellularity that is classic for meningiomas.

Technical Parameters. Water molecules diffuse down thermal gradients through inherent Brownian motion and the more easily water molecules can diffuse, the less of an initial T2* signal remains. In DWI, a T2* weighted image with no diffusion attenuation (b = 0 image) is obtained first. Next, the ease with which water can diffuse is assessed in at least the 3 orthogonal directions (x, y, and z) by symmetrically applying a gradient on either side of a 180-degree pulse. If restricted diffusion occurs, an increased signal is obtained. To generate isotropic DWI maps, the geometric mean of the direction-specific images is calculated. The apparent diffusion coefficient (ADC) map generated is related to the natural logarithm of the isotropic DWI divided by the initial T2* signal (b = 0). Areas with restricted diffusion appear dark on ADC images.24

Clinical Uses. For imaging brain tumors with cellularity, DWI is valuable because most brain neoplasms do not have homogenous restricted diffusion. In contrast, lymphomas, epidermoid cysts, meningiomas, chordomas, and pyogenic abscesses do have significant homogenous restricted diffusion (Figure 3).25-27 Because cell walls are barriers to the water diffusion, cellularity positively correlates with restriction diffusion and inversely with ADC values; highly cellular tumors such as lymphomas, medulloblastomas, or primitive neuroectodermal tumors (PNET), and some highly malignant gliomas may have significant diffusion restriction as well.28 Necrotic tumors such as GBMs, however, do not show homogenous restricted diffusion seen with nonnecrotic tumors (eg, lymphomas or meningiomas). Low ADC values can be used as a marker for increased tumor grade or poor outcomes in glioma and lymphoma.29-31 Tumor foci among regions of vasogenic edema can be localized with ADC values for better biopsy targeting and evaluation of potential FLAIR-hyperintense nonenhancing tumors.32,33 Higher ADC values have been reported in pseudoprogression, because of vasogenic edema of the inflammatory treatment effect, compared to lower ADC values in progressive cellular disease.34,35

The phenomenon of pseudoresponse in people with high-grade glioma treated with bevacizumab can be also be detected with DWI because there will be restricted diffusion in the region of the tumor. This anti-vascular endothelial growth factor (anti-VEGF) drug can cause near-complete resolution of tumor contrast enhancement, giving the false impression of treatment response; whereas, in reality, there may actually be a residual hypoxic tumor that can be seen on DWI.

Technical Parameters. In DTI, an advanced application of DWI, the 3-D shape of diffusion is determined with diffusivity (eigenvalues) and direction (eigenvectors). The 3 common DTI techniques are the fractional anisotropy map, the principal diffusion direction map, and fiber-tracking maps. Fractional anisotropy (FA) is an index for the amount of diffusion asymmetry within a voxel (a 3-dimensional pixel). In the normal brain, diffusion asymmetry within voxels reflects intact myelination of white matter tracts. Brighter areas are more anisotropic than darker areas. The principal diffusion direction map assigns colors to voxels based on a combination of anisotropy and direction such that nerve fiber tracts are visualized.36

Technical Parameters. Magnetic resonance spectroscopy (MRS) analyzes the chemical composition of tissues grouped by voxels.39 The most recognizable metabolite peaks in spectroscopy include N-acetylaspartate (NAA), a marker of neuronal viability; creatine (Cr), a marker of cellular metabolism; choline (Cho), a marker of cell membrane turnover; and myoinositol (MI), a marker of astrocyte integrity. Lactate peaks reflect necrosis and hypoxia in tumors. A normal spectrum has upward sloping of peaks from choline to NAA, forming Hunter’s angle of approximately 45°.40,-41 Usually absolute heights of metabolite peaks are not used, and the peaks are analyzed as ratios.40-42

Clinical Use. In MRS either single- or multivoxel technique may be used. Single-voxel technique provides a high signal-to-noise ratio in short scan time and is used for a targeted region of interest. Multi-voxel chemical shift imaging (CSI) has a larger total coverage area and higher spatial resolution than single-voxel MRS, which is important for imaging large heterogeneous lesions.43 Cellular turnover and loss of normal neuronal metabolites in brain tumors result in elevated Cho, decreased NAA, and a downward sloping appearance of metabolite peaks (Figure 3).41 MRS has been shown to differentiate grade of gliomas on the basis of a positive correlation between Cho/NAA and Cho/Cr ratios and grade.44 Because lower-grade gliomas are correlated with an elevated MI/Cr ratio45 and elevated Cho/NAA and Cho/Cr ratios are reported in infiltrative tumor edema vs vasogenic edema, MRS can differentiate glioma from metastasis or be used for biopsy targeting of glioma.5,45 Several studies have shown that decreased Cho and the presence of lipids and lactate are associated with radiation necrosis.46,47

In SWI, high-resolution 3-dimensional T2* gradient echo sequences differentiate internal vascular architecture and hemorrhage in tumors (Figure 4). Both blood products and mineralization appear dark on magnitude images and can be differentiated on filtered phase images in which paramagnetic blood products appear dark and diamagnetic calcium appears bright.48 The presence of a high-grade intratumoral susceptibility signal (ITSS) distinguishes GBMs from solitary metastatic brain tumors. On susceptibility imaging, serpiginous dark vessels reflect dysplastic vessels seen in GBM, which should be distinguished from hemorrhagic tumor that can occur with both GBM and metastases. The lack of ITSS can indicate lymphomas or nontumorous lesions.49,50 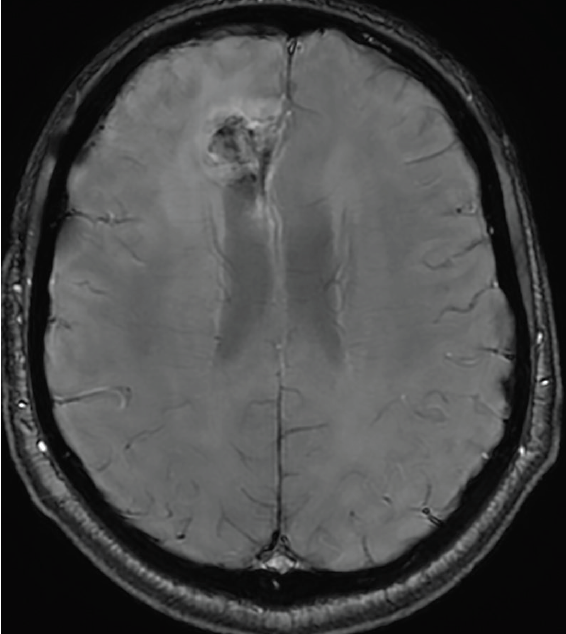 Neuroimaging today provides noninvasive physiologic and biochemical information that has far surpassed the prior era of MRI that relied solely on contrast enhancement. Clinicians should be familiar with these advanced imaging techniques at the diagnosis of brain tumors and during the subsequent surveillance period.

MS and PM report no disclosures.