As we expand our understanding of seizure cycles, the new field of chronoepileptology begins.

Among the most debilitating aspects of epilepsy is the unpredictable nature of seizures. The ability to predict with relative accuracy when seizures will occur would allow for strategies to mitigate against injury and prevent sudden unexpected death in epilepsy (SUDEP). There has long been a tantalizing observation that seizure prediction may be possible as neurologists have described different circadian patterns with epilepsy arising from specific brain regions.

Associations between seizure type and circadian pattern of seizure have been observed since antiquity and have more recently been documented in patient diaries and EEG monitoring studies. Some circadian patterns are so well known and consistent that observation of a circadian pattern assists in clinical diagnosis (eg, convulsions of juvenile myoclonic epilepsy that occur on waking) (Figure). In general, the cortical region from which a seizure originates exerts some influence over the time of day that a seizure is more likely to occur. Seizures originating from neocortical temporal regions exhibit diurnal, or daytime, patterns in contrast to seizures of mesial temporal origin, which tend to have a bimodal pattern with a primary peak in the late afternoon and a secondary peak in the morning.1,2 Seizures originating from the frontal lobe tend to occur with a nocturnal pattern.1,2 Occipital seizures tend to occur during the daytime, peaking in the morning and afternoon, and parietal seizures peak in the early morning, although these findings are less robust due to fewer people having seizures of occipital or parietal onset.2,3 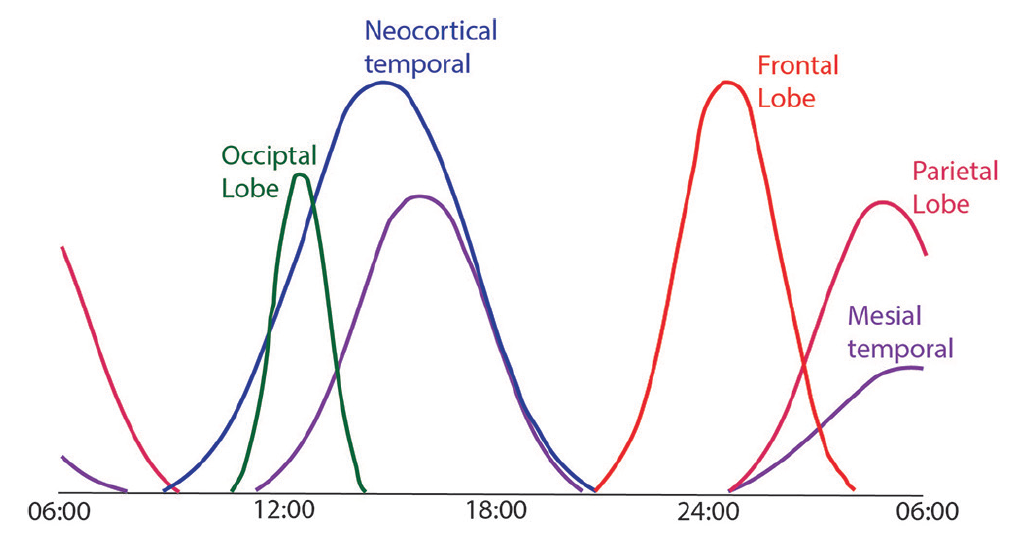 Figure. Seizures with different origins have different circadian patterns, which can be distinct enough to aid diagnosis. These curves show circadian patterns, not actual frequency, and those shown for occipital and parietal lobe seizures are less reliable because of the lower incidence of these seizure types.

Numerous biologic functions exhibit a circadian rhythmicity. These daily fluctuations interact with brain function and, at any time, may inhibit or promote the generation of a seizure. A common example would be the circadian sleep-wake cycle that is well known to influence the occurrence of both interictal discharges and seizures.

It is difficult to separate the effect of sleep on seizure from the effect of circadian rhythm on seizure. Circadian timing affects epilepsy both by contributing to sleep-wake cycles and by modulating brain function during sleep and wake periods. Numerous circadian-regulated proteins and processes may promote or inhibit a seizure. For example, cortisol is released in a circadian manner and known to be correlated with epileptiform activity. Cortical excitability also follows a circadian pattern. Additionally, the thalmocortical network may play a role in circadian patterns of epilepsy. During sleep, the reticular nucleus paces the thalamocortical network leading to synchronization; these same circuits are thought to be involved in generating a generalized spike-and-wave discharge.2

Recent studies of genetic control of circadian patterns provide insight into potential circadian drivers of epilepsy. Clock genes contribute to the presence or absence of epileptic excitability. For example, the clock circadian regulator (CLOCK) gene and protein are expressed differently in patients with cortical dysplasia and tuberous sclerosis compared with healthy control subjects. The BMAL1 gene, encodes a protein that interacts with the CLOCK protein and seems required for circadian variability of electrically induced seizures in animal models.2 Last, the mammalian target of the rapamycin (mTOR) pathway and its circadian patterns may influence seizure expression. Dysregulation of mTOR signaling is involved in the epileptogenesis of tuberous sclerosis and was recently shown to be involved in nocturnal frontal lobe epilepsy.2

Biological patterns, however, are not limited to circadian. There is a range of cycles beyond circadian that can influence the relative likelihood of a seizure at a given moment. These longer cycles—circaseptan (weekly) and multidian or longer—have been difficult to study until recently because of EEG recording limitations in ambulatory or epilepsy monitoring unit (EMU) settings and inaccuracies inherent to patient diaries. Newer technologies provide a much broader timescale to view these patterns from long-term ambulatory intracranial recordings.1,4

Responsive neurostimulation (RNS) devices can record hourly interictal epileptiform discharge (IED) counts and timestamps of seizures to provide a new source of objective data on circadian, ultradian, and multidian rhythms. These measurements are also not influenced by antiepileptic drug (AED) withdrawal in the small subset of patients with medication-refractory epilepsy who are deemed appropriate for the device.1,4 Review of data from these patients’ device recordings confirms that circadian patterns of epileptiform activity vary by region of seizure onset and adds to our knowledge of seizure patterns.1

In a retrospective analysis of data from the pivotal RNS trial involving 191 adults with intractable focal epilepsy, long events (LE) and LE determined to be consistent with seizures (LE-Sz) occurred in patterns consistent with prior data. Participants with mesial temporal epilepsy tended to have seizures in the late afternoon and early evening; patients with neocortical temporal epilepsy and frontal lobe epilepsy LE and LE-Sz occurred primarily in the early morning. Additionally, RNS data show a strong circadian pattern for interictal discharges in all subjects confirming activation of IEDs with sleep.1

These findings demonstrate that IEDs are generally circadian and vary with sleep-wake cycles. Occurrence of a seizure is more complicated, however, and the seizure threshold is modified by factors that include seizure type and more complex patterns that may be circadian, ultradian, and multidian. This, of course, makes seizure forecasting incredibly complex, however, once a pattern for an individual is identified that may be of profound value to that person. Periods of highest seizure likelihood vary individually, but for a given person, patterns are stable over time—up to 10 years based on available data.4-6 Interestingly, the predictive value for each patient was also variable based on seizure frequency. The authors found that, “seizures are more tightly coupled to the preferred multidian phase in subjects with low or moderate seizure rates (the majority in this study) than in subjects with high seizure rates.”4

Altogether, we are approaching an age where chronoepileptology may provide some individualized diagnostic, management, and seizure prediction tools. Observations and research into circadian patterns is evolving into understanding of more complex patterns. For an individual patient, there is a high probability of seizure when circadian and multidian patterns align. “Seizures are influenced by the cumulative effects of various circadian rhythms that vary in influence by the pathophysiology of the underlying syndrome.”1 When harnessed, these data may provide accurate seizure prediction. Knowledge of relative risk of seizure on a given day could be extremely useful for a patient with epilepsy. Such knowledge could allow for modification of potentially dangerous activities during high-risk periods but allow for a less restrictive lifestyle during low-risk periods. Accurate seizure prediction could also provide opportunities to improve seizure control by making pharmacologic adjustments at higher-risk periods while decreasing medications and side effects during lower-risk periods.