Cannabis and Cannabinoid Therapies for Headache

Shown effective for treatment of pain, Cannabis may have benefits for patients with headache, but more research is still needed.

As legalization of marijuana has increased, so too has systematic and controlled research into medicinal uses for marijuana. The National Academies of Sciences, Engineering, and Medicine published a statement in 2017 that reported there is conclusive or substantial evidence to support the treatment of chronic pain, in adults, with Cannabis or cannabinoids.1 There is still, however, a lack of prospective studies about Cannabis and cannabinoid treatments for headache.2 Harnessing the medicinal potential of Cannabis for the treatment of headache is promising and requires understanding the biology, physiology, existing clinical evidence, and potential risks of Cannabis and cannabinoid treatments for headache.

The term marijuana can be confusing (Table 1); it is primarily defined as any Cannabis plant that contains more than 0.3% delta9-tetrahydrocannabinol (Δ9-THC).3-7 Each species of Cannabis has a unique biochemical composition, or cannabinoid profile, of varying amounts of more than 400 compounds. Delta9-tetrahydrocannabinol is the most common psychoactive cannabinoid and the major difference between species is often the relative amount of Δ9-THC vs cannabidiol (CBD); however, species with similar Δ9-THC to CBD ratio can still have markedly different effects. For example, C. indica and C. sativa have similar Δ9-THC to CBD ratios, but C. indica is known for having a calming effect, and C. sativa is known for having an energizing effect.6 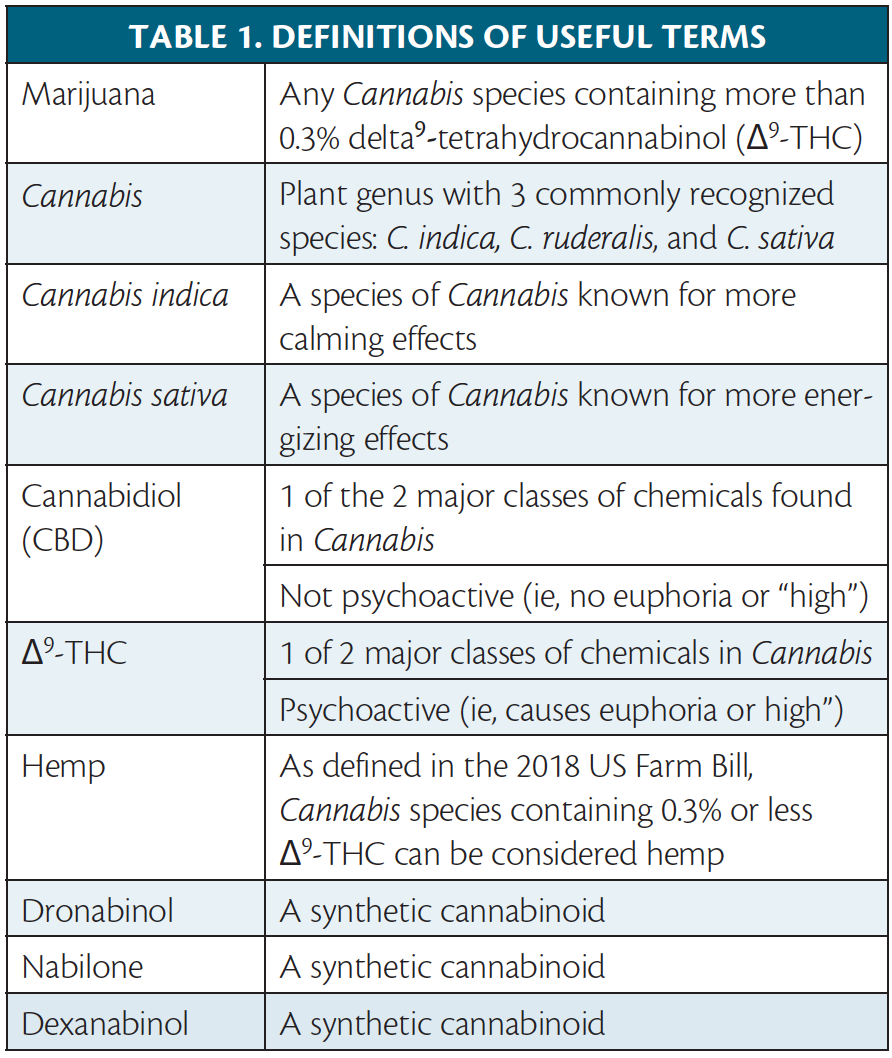 It is estimated that there are 183 million (3.8% of the global population) annual users of Cannabis, which has remained stable in recent years. In the US, however, there has been a notable increase in Cannabis use between 2007 and 2015, with an annual prevalence of 13.5% of the population over age 12 years. The number of people who use Cannabis daily or nearly daily almost doubled (1.9% in 2002 to 3.5% in 2015) and is the major driver of the increase in use in the US.8

Cannabis use remains federally prohibited in the US, although only 3 states (Idaho, Nebraska, and South Dakota) have restrictions on all Cannabis and Cannabis-derived products. Most states allow medical marijuana use under certain circumstances. In 10 states and the District of Columbia, Cannabis is also legal for recreational use.9 In 37 states, CBD derived from hemp is legal because of the 2018 Farm Bill, but specific state laws vary.7 Cannabis products sold at dispensaries do not undergo the rigorous requirements of traditional pharmaceutical development. The Food and Drug Administration (FDA) has approved 3 cannabinoids. Dronabinol and nabilone are synthetic cannabinoids (containing synthetic Δ9-THC) approved to treat medically refractory nausea and vomiting associated with cancer chemotherapy. Dronabinol is approved for treating anorexia and weight loss in persons with AIDS.10 The third is derived from the plant in conditions that ensure a consistent dose of CBD, which is approved for treatment of seizures associated with Lennox-Gastaut syndrome and Dravet syndrome. A June 2018 press release from the FDA noted, “This is the first FDA-approved drug that contains a purified drug substance derived from marijuana.”11 Medical marijuana is being researched for treatment of many other neurologic conditions.

Cannabis is promising for headache treatment because it affects the cannabinoid system in the brain, which plays a role in pain processing (Figure). In animal models, cannabinoid 1 (CB1) receptor activation has been implicated in reducing neuropathic, visceral, and inflammatory pain.12,13 Both CBD and Δ9-THC are exogenous cannabinoids; there are also endogenous cannabinoids, the most studied of which are anandamide (AEA) and 2-arachidonoylglycerol. These endocannabinoids are only present in small amounts in the brain and are synthesized and released on demand and have presynaptic effects (Figure B).4 The CB1 receptor is expressed less in the brainstem, which may account for low risk of respiratory depression in overdose. Cannabinoids interact with the cannabinoid 2 (CB2) receptor, primarily found in the immune system.14 Agonists of CB1 receptors also release dopamine in the nucleus accumbens, where it plays a role in pain processing.12 Cannabinoid central effects include short-term memory impairment, disruption of psychomotor control, appetite stimulation, antiemetic effects, and antinociceptive effects.15

In individuals with brain injury, intracranial pressure (ICP) is expected to rise in the 12 hours after head trauma. Several studies have shown that cannabinoids may reduce ICP in traumatic brain injury (TBI).19,20 Cannabinoids are also thought to have a neuroprotective role after TBI.19 In a prospective, randomized, double-blind, placebo-controlled, multicenter trial, intravenous dexanabinol—a synthetic, nonpsychotropic cannabinoid—was safe and well tolerated in 67 patients with severe head injury and resulted in improved ICP/cerebral perfusion pressure control without jeopardizing blood pressure. Mean ICP values in those treated with dexanabinol increased significantly less than with placebo, suggesting dexanabinol prevents rise in ICP, possibly by inhibiting the spread of edema.20

Idiopathic intracranial hypertension (pseudotumor cerebri) also presents with increased ICP and can be difficult to treat. In a case report, a woman with medically refractory pseudotumor cerebri had complete resolution of headache within 5 minutes of smoking marijuana once a week, without recurrence that day. Cannabis may not be the best treatment choice for individuals with pseudotumor cerebri who are overweight, however, because of appetite-stimulating effects.21

The number of patients asking about the use of Cannabis for treatment of headache is increasing, especially for treatment of migraine. Even 30 years ago, a survey study showed participants were commonly using Cannabis to self-treat migraine.22 In a 2018 electronic survey study on patterns of medicinal Cannabis use among persons with a variety of illnesses, including chronic pain, headache, and migraine, 24.9% (505 of 2,032 participants) used Cannabis to treat headache. Across all individuals with pain, hybrid Cannabis strains were preferred; specifically, the most preferred strain was “OG Shark.” The most common methods of use were vaporizing and smoking.5

There is a a single abstract presented from a double-blind, placebo-controlled study that suggests cannabinoids can be suitable for prophylaxis of chronic migraine and acute treatment of cluster headache in patients with a history of migraine.29 In a case series of 3 persons with chronic headache, relief of symptoms occurred after smoking Cannabis similar to that seen after taking ergotamine and aspirin.30 In a different series of 3 individuals, migraine attacks occurred after abruptly stopping long-term daily marijuana use.22 A 2002 survey of 2,480 participants from the Oakland Cannabis Buyers’ club found that 5% of patients used Cannabis to treat migraine.31

A 2016 retrospective chart review of 121 adults with migraine, who used prescribed medical marijuana to treat or prevent migraine, had migraine frequency decrease from 10.4 to 4.6 headaches per month (P < .0001). Most study participants used more than 1 form of marijuana daily for prevention, and inhaled forms were commonly used for acute treatment; 19.8% reported decreased frequency of migraine, and 11.6% reported aborted migraine. The most common side effects were somnolence and difficulty controlling the effects of marijuana related to timing and intensity of the dose; edible marijuana products caused more negative effects.32

Prevalence of medication overuse headache (MOH) is 1% to 2%; prevalence at tertiary headache centers is estimated at 30% to 50% of patients.33 Persons with MOH often do not respond to prophylactic treatment in the setting of ongoing medication overuse. Tapering and discontinuing medication overuse is integral to the treatment of MOH but can be challenging because of the initial increase in pain and other withdrawal side effects. In the first and only randomized double-blind active-controlled crossover study investigating efficacy of the synthetic cannabinoid nabilone (a CB1 receptor agonist) in 26 individuals with long-standing intractable medication overuse headache, nabilone was more effective than ibuprofen at reducing pain intensity and daily analgesic intake (P < .05).34

Cannabinoids hold promise for reducing opioid use as well. Over 50% of emergency department visits for migraine result in treatment with opioids, despite this treatment not being recommended for treatment of any primary headache disorder.35 There is strong preclinical data indicating that coadministration of cannabinoids and opioids may result in reduced opioid doses without loss of analgesic efficacy.36 There is, however, still a lack of prospective, controlled clinical trials and conflicting evidence. Some data suggest that medical marijuana use may reduce opioid prescriptions for patients with pain37,38; however, other data suggest Cannabis use may increase the risk of developing an opioid-use disorder.39

The safety of Cannabis and cannabinoid treatments is a concern because of the heterogeneity of unregulated products on the market. Individuals usually access these products without the guidance and recommendation of a physician. It is important to consider the ratio between Δ9-THC and CBD, because most of the known adverse effects of Cannabis can be attributed to Δ9-THC.40

Commonly known side effects of Cannabis often come from studies that primarily evaluated recreational users and cannot be assumed to be universal; therefore, it is important to correlate Cannabis side effects to specific phytocannabinoids, phytocannabinoid ratios, sterility of growing conditions, contaminations with pesticides, fungal and bacterial microbes, dosing, and patient characteristics.6 Until more strict product regulations are enforced, it is essential to educate patients on potential adverse effects. Neurologic side effects of Cannabis and cannabinoid treatments are shown in Table 2.4 Whether or not long-term Cannabis use can lead to more permanent cognitive deficits is controversial and requires more research.4,41 Rare side effects include reversible cerebral vasoconstriction syndrome (RCVS), which could be triggered potentially by daily use of marijuana.42,43 Dependency occurs in 9% of marijuana users (compared to 32% in tobacco users and 23% in heroin users).6 Cannabinoid hyperemesis syndrome (CHS) is thought to be a variant of cyclic vomiting syndrome secondary to chronic Cannabis use for which discontinuing use is the only assured cure. Other potential treatments include antipsychotics, benzodiazepines, and possibly topical capsaicin.44 Precaution should be taken, or use avoided, in persons with a history of substance abuse, concurrent usage of other sedative or hypnotic medications, and psychiatric disease (specifically schizophrenia and patients with mood disorders).6

Cannabis and cannabinoid treatments for headache therapies are promising given that the endocannabinoid system is an important system in modulating endogenous pain-processing pathways. There is anecdotal and case-based evidence in the literature supporting use of Cannabis for headache treatment, but a lack of prospective, high quality, controlled studies of efficacy, optimal dosing, and safety. Limited access to research-grade Cannabis products, lack of funding, and regulatory barriers continue to hinder clinical trials.

Until there is better quality evidence, clinicians should not formally recommend Cannabis as a headache treatment. There are many key questions that have yet to be answered. In the case of migraine, should Cannabis and cannabinoid treatments be used as a daily preventive or as a rescue medication? What is a safe dosing and frequency of use? For those headache patients who are already self-medicating with Cannabis, it is the clinician’s responsibility to bring awareness to potential adverse effects, especially with daily or nearly daily use. Physicians should also inform patients that clinical evidence is growing but is currently limited.

The author has no financial or other relationships relevant to this content to report.

1. National Academies of Sciences, Engineering, and Medicine. The Health Effects of Cannabis and Cannabinoids: The Current State of Evidence and Recommendations for Research. 2017. Washington, DC: The National Academies Press. https://doi.org/10.17226/24625.

6. Baron EP. Comprehensive review of medicinal marijuana, cannabinoids, and therapeutic implications in medicine and headache: what a long strange trip it’s been… Headache. 2015;55(6):885-916.

29. Nicolodi M, Sandoval V, Terrine A. Therapeutic use of cannabinoids-dose finding, effects, and pilot data of effects in chronic migraine and cluster headache. Abstract presented at: 3rd Congress of the European Academy of Neurology; June 24-27 2017 Amsterdam, The Netherlands.

Behavioral and Integrative Therapies for Headache