Headache Highlights: From Killer to Cure—Botulinum Toxin as Therapy Turns 30

Botulinum toxin, once known as the sausage poison, has 30th birthday as therapy.

Justinus Kerner swallowed hard, coaxing a modicum of saliva past the solid lump lodged in his throat. His lips quivered to form unassuming sounds with a tongue drier than the landjäger he chewed when trekking the mountains in his native Baden-Warttemberg, and his breathing changed from automatic to laborious as searing dread wrapped tightly around his chest. Justinus—scientist, physician, and man of letters—wondered if he had made a grave mistake.

Kerner’s 29th year coincided with the height of the Napole-onic Wars in Germany. As battles raged, denizens of the rolling hills and black forests surrounding Stuttgart suffered mightily. At the end, all that remained were destroyed homes; decimated livestock, crops, and families; and an economy in shambles. As fortunes of provincials and gentry alike spiraled downward, age-old food preparation techniques of cleaning, salting, and cooking at high temperature were discarded as prewar extravagances, just like visits to Hohenzolleren Castle, paddle boat rides on the Danube, or a rich slice of schwärzwalder kirshtorte.

In the summer of 1817, outbreaks of unexplained deaths of soldiers and dignitaries led many to turn to young Justinus Kerner, newly appointed country doctor. Possessed of a writer’s keen attention to detail, Kerner observed that fatalities clustered in those who had dined together. Through a process of elimination, he discovered tainted sausage was the culprit. Kerner postulated that poorly prepared sausage contained poison that, when ingested in sufficient quantities, caused swallowing and breathing difficulty, double vision, dry mouth and, in many cases, a rather gruesome death. In numerous experiments, he injected small amounts of spoiled sausage into all types of fauna, from the lowly grasshopper, to the mouse, hedgehog, and even a few stray cats, all with the same paralytic—and lethal—outcome. Working his way up the phylum, herr doktor ingested a bit of rotten wurst himself, letting the greasy morsel tuck in under his tongue until the rancid tang could be tolerated no more, at which point he expelled it. Intrigued by this new poison, Kerner hypothesized that just as boiling water both softens a potato and hardens an egg, so could this toxin be both killer and, at small doses, cure (though of what, he was uncertain). As he struggled to swallow and heaved aching breaths, Kerner pondered the distinct possibility that he may have consumed too much wurst, and his discovery of botulism (from the Latin for sausage poisoning), just might be his posthumous claim to fame.

The centuries-long arc of the history for botulinum toxin consistently curves, wondrously, away from assassin and toward healer, with a few zigs and zags along the way. (Have you ever heard of pruno, or wonder why many prisons never include whole potato as part of a meal?) After Justinus Kerner’s discovery of a deadly toxin in spoiled sausage, it took another 60 years, another outbreak (in Belgium, brass band members banqueting on home-cured ham), and another fledgling scientist to propel science forward.

Emile-Pierre van Ermengem, a newly minted bacteriologist at the University of Ghent, received a chunk of the fatal home-cured ham from local constabulary. But what in the ham was so lethal? As luck would have it, Ermengem had studied in Berlin under Robert Koch, the Nobel prize-winning father of modern bacteriology, and rigorously applied Koch’s postulates (Box) in his scientific method to find the murderer lurking in the pork piece. In elegant experiments, van Ermengem isolated Clostridium botulinum, a bacterium commonly found in soil, and the toxin it produced, as the causative killer. In his classic 1897 paper, van Ermengem wrote that C. botulinum, “is a gram-positive rod-shaped anaerobic spore-forming motile bacterium able to produce the neurotoxin botulinum which, when ingested, causes severe paralytic disease.” Works by both Kerner and Ermengen led to safe food preparation regulations, re-establishing proper (and forgotten) curing and cooking techniques—for all foods, not just sausage and ham, which resulted in marked reduction in food-borne botulism.

1. Pathogenic agent must be present in all cases of the disease.

2. Pathogenic agent must be isolated from the host with the disease and grown in pure culture.

3. Specific disease must be reproduced when a pure culture of the bacteria is inoculated onto a healthy host.

4. Microorganism must be reisolated from the inoculated, diseased host and identified as identical to original specific causative agent.

From Alphabet to Bioweapon to Civilian Use

Decades after van Ermengen’s seminal paper, scientists further characterized C. botulinum toxins. From Germany, Leuchs isolated 2 strains, which he designated (rather unimaginatively) as types A and B. Type C was identified by an Australian named Sedden in 1922, type D in the US by Meyer and Gunnison. Type E sprang from the Ukraine in 1936, and in 1960, the Scandinavians Moller and Scheibel found types F and G.

In 1932, the year van Ermengem died, Adolph Hitler began his ascent to power in Germany. The run up to the Second World War brought heightened interest in botulinum toxin. Generals and politicians in Washington worried that Axis powers were developing biologic weapons and that the US needed both antidotes and their own bioweapons. Enter Edward Schantz, a farmer’s son from the wind-swept plains a few hour’s drive northeast of Milwaukee. Schantz says he should have grown up a dairy man, should have stayed in Hartford, his Wisconsin hometown on the Rubicon river. Instead, he went to college and graduate school, studying neurotoxins in foodborne illnesses, including botulism. The Department of Defense got wind of Schantz’ work, and he was commissioned to lead the US biologic weapons program at Fort Detrick, Maryland. Tasked with discovering all he could about biologic warfare agents, Schantz studied a plethora of poisons, including saxitoxin (from clams and other shellfish) and botulinum toxin type A, which he cultured and grew in a large glass vat. Shantz ultimately grew disenchanted with botulinum toxin for military use because, although by weight, it was the most toxic biologic agent known (75 ng is lethal to a human; a kilogram would kill everyone on earth), it didn’t survive well in aerobic conditions. Across the Atlantic, British scientists were coming to the same conclusion. At their secretive biologic warfare facility, Porton Down, researchers purified a strain, later named Dysport, combining dys- for dystonia (its therapeutic indication) and port for Porton Down. Although botulinum toxin was abandoned for military use by both countries, what was learned laid the groundwork for civilian applications.

When the war and his military service ended, Ed Schantz returned to Wisconsin, not to his childhood dream of the dairy farm, but in Madison at the University, his large glass vat teeming with C. botulinum in tow. In the 1960s and 70s, Schantz would agree, from time to time, to part with an aliquot of the tiny toxin producers if he felt a scientific project for which it was requested was worthy. So it was that Alan Scott, young ophthalmologist and researcher at the Smith-Kettlewell Eye Institute in San Francisco, came knocking on Schantz’s laboratory door. Scott spoke of his inkling that in miniscule doses botulinum toxin, this uber poison, could treat strabismus, by slightly weakening the pulling eye. Whatever he said worked, and Scott returned to the west coast with enough neurotoxin in his briefcase to kill everyone in the Smith-Kettlewell building—and the surrounding Pacific Heights neighborhood.

Working initially with monkeys but moving quickly to experiments in human (after Food and Drug Administration [FDA] go-ahead in 1978), Alan Scott demonstrated that Shantz’s toxin did indeed treat walleye. Filing a patent, Scott named his product oculinum, from ocu-, referring to the eyes, and linum, meaning to line up. In treating strabismus, Scott’s product lined up the eyes.

Needing an investor, Scott shopped his toxin around but found few takers, primarily because strabismus is a rare condition. Not until a decade after his first experiments in humans, did he convince a small allergy and eye drop company to work with him. That company, Allergan, bought oculinum for $9 million and shepherded the neurotoxin through FDA approval for blepharospasm and seventh cranial nerve disorders. No longer just for aligning eyes, Allergan renamed oculinum Botox and devoted considerable resources to developing other indications that soon began tumbling onto the market every few years (Table). 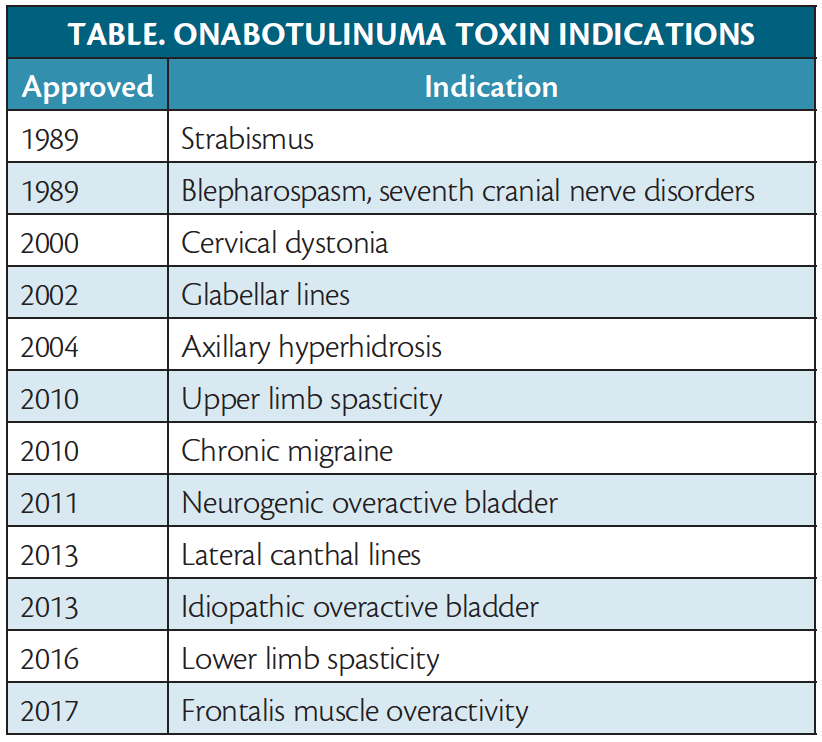 In the 30 years since the FDA first approved botulinum toxin for strabismus, several other indications began as incidental findings. For example, cosmetic wrinkle reduction came from people treated for blepharospasm looking years younger after their shots. When individuals treated for wrinkles remarked that their migraines seemed considerably lighter after their injections, yet another indication was found. That a paralyzing toxin could treat migraine seemed outrageous, but a decade of research, including 2 phase 3 pivotal studies led to FDA approval for chronic migraine in 2010. Allergan flourished, making billions from botulinum toxin. Soon competitors launched their own botulinum toxin products, beginning with Elan’s Myobloc in 2000, Ipsen’s Dysport (the old Porton Down product) in 2009, and Merz’s Xeomin in 2010. Each has muscle-relaxing indications but only Botox is approved for chronic migraine.

A Toast to a Killer Turned Cure

Not all botulinum toxin is manufactured by pharmaceutical companies—every now and then, the killer C. botulinum rears its head in unexpected places. Prison inmates have accidentally brewed botulinum toxin when fermenting pruno, an illicit alcoholic beverage made from fruit, including prunes (hence the name). A potato is used because potato starch can cause fermentation to produce ethanol (as for vodka). Spuds, grown in soil, are chock full of C. botulinum. Multiple outbreaks of botulism in prisoners from distilled pruno has led to the removal of whole potatoes from most penitentiary kitchens.

What of Justinus Kerner? Luckily, he did not succumb to self-induced botulism. Slowly, his tongue and palate began to regain function, and the lash around his chest loosened. He went on to a long contented career as poet and literary critic, turning his back on medicine and wurst for the rest of his days. What would Kerner say about the medical uses of his sausage poison he had presaged 2 centuries ago? A child with cerebral palsy walks faster and safer, a blepharospasm sufferer can now open his eyes to drive, and person with debilitating migraine pain can make it to work. From killer to cure, the same boiling water that softens a potato hardens an egg. The same lethal toxin, used in minute doses, can be harnessed for good. A poison as old as time, FDA approved for 3 decades.

So, we raise a glass to that deadliest of neurotoxins, that Jekyll-and-Hyde assassin and angel, to celebrate its 30 years as an approved medicine, for multiple indications, for millions of people the world over.