The return of the great imitator makes it critical to know the guidelines for testing for neurosyphilis.

In the early 20th century, new-onset psychosis secondary to neurosyphilis was common. With the advent of antibiotics, cases of neurosyphilis-induced psychosis became rare. A rise occurred in the late 20th century with the rise of HIV coinfection. Today, sexually transmitted infections are increasing in the US. The Centers for Disease Control and Prevention (CDC) stated in August 2018 that diagnoses of syphilis increased 76% from 2013 to 2017,1 which may be understated as many cases are not diagnosed. In a CDC report in 2016, rates of primary and secondary syphilis increased from 2.1 (2000-2001) to 8.7 (2015–2016) cases per 100,000.2

It would not be surprising in this context if neurosyphilis was also increasing. However, the clinical suspicion for neurosyphilis is as low as 36%, delaying diagnosis and treatment by as much as 24 months.3 For clinical neuropsychiatrists, syphilis testing is among the standard laboratory tests obtained during admission or changes in behavior or cognition.

Syphilis is treatable and, when treated in the early stages, should not progress to neurosyphilis. With antibiotics, there is less disease progression, which may explain the low clinical suspicion. Neurosyphilis can occur at any stage of infection and take many different forms, from seemingly benign meningitis, to meningovascular disease leading to strokes, to tabes dorsalis, or general paresis. This has earned neurosyphilis the epithet of “the great imitator.” Although more severe manifestations typically occur 10 to 25 years postinfection, psychosis and general paresis can occur as early as 2 years postinfection; in the prepenicillin era, it was described at 8 months postinfection.4

We discuss 2 patients with different presentations in order to discuss testing considerations and to demonstrate the importance of carefully considering syphilis in presentations of cognitive decline, psychosis, and catatonia (Case 1 and Case 2).

Case 1. A Man Treated for Psychosis

A man, age 36, with no psychiatric history other than cannabis use disorder in remission for 2 years had medical history notable for a positive rapid plasma reagin (RPR) titer 8 years earlier without documented treatment. Per collateral account, 1 year ago he started having increased clumsiness with slowed movements, increased forgetfulness, and soft, stuttering speech. Approximately 6 months later, he had forensic medical evaluation after breaking and entering. At that time, his RPR titer was 1:500. He received partial treatment. During the next few months, he had multiple hospitalizations for disorientation, psychosis (paranoia and hallucinations), and catatonia. He had multiple trials of high-dose antipsychotics with no response. In medical records, he was noted to be mute, not eating, not drinking, and standing still for long periods of time in odd positions.

At the time of presentation, the patient continued to be combative but also had long stretches of posturing at the edge of his bed. His vital signs fluctuated dramatically. He was started on lorazepam, with no response other than stabilization of vital signs. Although he received a total daily dose of 22 mg lorazepam for catatonia, he had a Bush-Francis Catatonia Rating Scale (BFCRS) score of 28, notable for mutism, negativism, stereotypy, psychomotor persistence, grasp reflexes, catalepsy, echopraxia, and perseveration. Neurologic examination was limited by combativeness but was notable for bradyphrenia, bradykinesia, and diffuse hyperreflexia. Follow-up examination during periods of improved cooperation additionally revealed decreased visual acuity, dysarthria, left-sided weakness, decreased vibratory sensation to the knees, left greater than right hyperreflexia, and dysmetria. 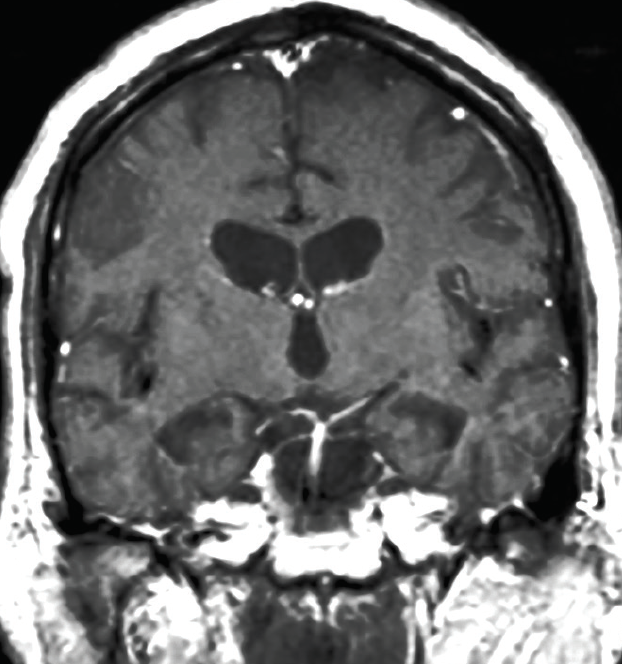 Given the history of partial treatment for syphilis, clinical examination findings, and positive CSF VDRL, the patient was treated for neurosyphilis with IV penicillin G. For the catatonia secondary to neurosyphilis, he was continued on lorazepam, started on electroconvulsive therapy 3 times per week, and started on memantine and zolpidem. With treatment, his clinical picture greatly improved. He had improved alertness, responsiveness, speech, reality testing, and ambulation. He was able to play chess (frequently defeating medical students) and make artwork. He continued to have bradykinesia, hypertonicity (improved), left upper extremity flexor posturing with spasticity, hyperreflexia, intention tremor, and distal weakness.

The patient was eventually discharged home with a BFCRS score of 0 and no evidence of psychosis; however, he had residual difficulties with executive function and memory as well as a slowed gait and residual weakness in his left arm. His discharge medications were lorazepam 1 mg twice a day and zolpidem 10 mg at night for sleep. Repeat CSF analysis 6 months after presentation showed an appropriate decline in VDRL titer to 1:8. Repeat outpatient testing was scheduled for another 6 months later.

Case 2. A Man With Prefrontal and Mesiotemporal Cognitive Deficits

A man, age 59, with a silent stroke that occurred in his 40s and history of hypertension and type 2 diabetes, had no prior psychiatric history other than alcohol and cocaine use disorder. He exhibited bizarre behaviors (defecating on trays), disorganized and tangential thought processes, psychomotor agitation, insomnia, and speaking with nonsensical, clanging, rapid speech. He had a history of incompletely treated syphilis. 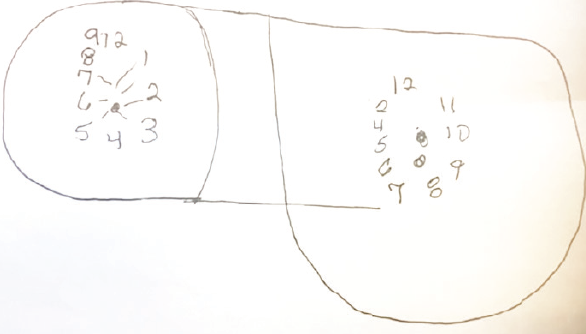 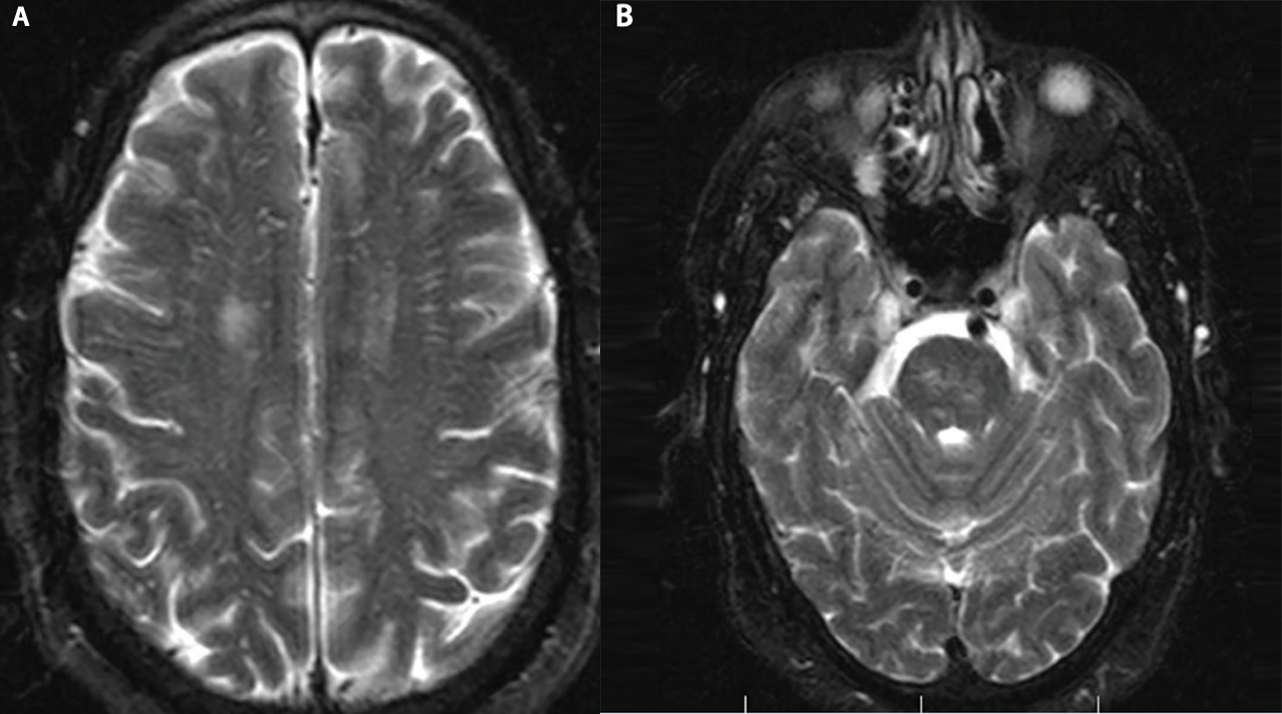 Because of the history of partially treated syphilis and reactive FTA-Abs, the patient was treated with IV penicillin G. His Montreal Cognitive Assessment score improved from 13 to 22 (30 possible) over a month. He improved enough for antipsychotics and benzodiazepines to be discontinued. After 4 months, a decline was noted in cognition and mood that improved with reintroduction of low-dose haloperidol. Repeat CSF analysis revealed a nonreactive VDRL and FTA-Abs. His brain MRI was unchanged.

Both patients had partially treated syphilis and no history of psychotic illness or cognitive disorder. Per collateral reports, the patients did not have a family history of mental illness. Both were outside of the usual age for a first break psychosis. It is now clear that the history of the patient in Case 1 had a gradual progression of suspicious symptoms. It could be argued that the patient in Case 2 may have also showed symptoms prior to the psychosis. The cerebrovascular accident that occurred in his 40s could have been a product of meningovascular complications of neurosyphilis. The diagnoses of hypertension and diabetes, also increasing his risk of stroke, overshadowed consideration of syphilis as an underlying cause.

These cases emphasize the importance of testing for syphilis in new-onset psychotic and cognitive disorders, as well as ensuring complete treatment to prevent further complications and disability. The algorithm for testing varies depending on the institution, starting with either nontreponemal testing followed by treponemal testing or vice versa (Table).5-7 Careful review of a patient's clinical history is required to guide testing and treatment for syphilis. 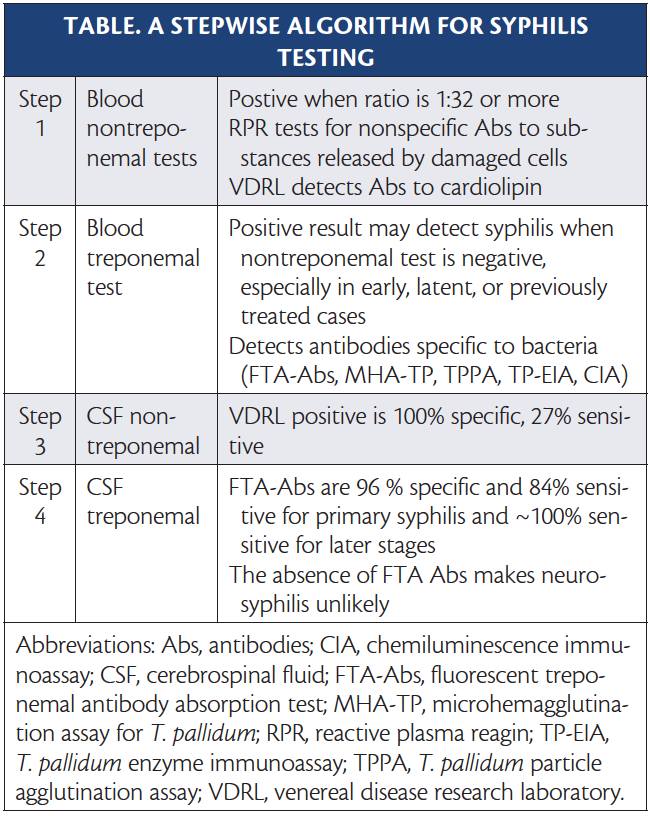 High suspicion for neurosyphilis led to cerebrospinal fluid (CSF) analysis in both cases, allowing for appropriate diagnosis and treatment. It is notable that the patient in Case 2 had a negative CSF venereal disease research laboratory (VDRL) test. Considering only CSF VDRL, he may not have received treatment specifically for neurosyphilis. With appropriate treatment, both cases showed great clinical improvement. Antipsychotics were no longer needed for the patient in Case 1 and were minimized for the patient in Case 2. Impairments remained that may have had better outcomes if there had been earlier diagnosis and treatment of syphilis.

2019 Drug and Device Approvals in Neurology
Takayasu Disease and Stroke