Stroke affects an estimated 7.2 million Americans >20 years of age and is the 5th leading cause of death in the United States. With an overall prevalence around 2.7%, stroke care accounted for an estimated $17.9 billion of direct medical costs in 2012 and 2013 and was among the top 18 diseases contributing to years lived with disability in 2010.1 Recurrent strokes account for about a quarter of all stroke events annually and are associated with 38% higher costs per patient 1 year after hospital discharge compared to new stroke patients; these estimates are expected to increase with the projected increase in stroke prevalence due to the gaining US population and prevalence’s association with increasing age in both men and women.1 With ischemic stroke accounting for 87% of all strokes in the US, it is imperative that strategies for ischemic stroke prevention, especially secondary stroke prevention given the higher financial and functional burden associated with recurrent events, are evidence-based and address the most common and expected underlying causes of stroke. Prevention regimens must also consider the patient experience as this largely impacts the level of adherence.

Direct oral anticoagulants (DOACs) provide an alternative to vitamin K antagonists (VKAs) such as warfarin for systemic anticoagulation because of fixed-dose regimens, fewer drug-drug interactions, and no requirement for drug monitoring (Table 1). Because the anticoagulant effect of DOACs begins within hours of first dose, these are also easier to initiate.2 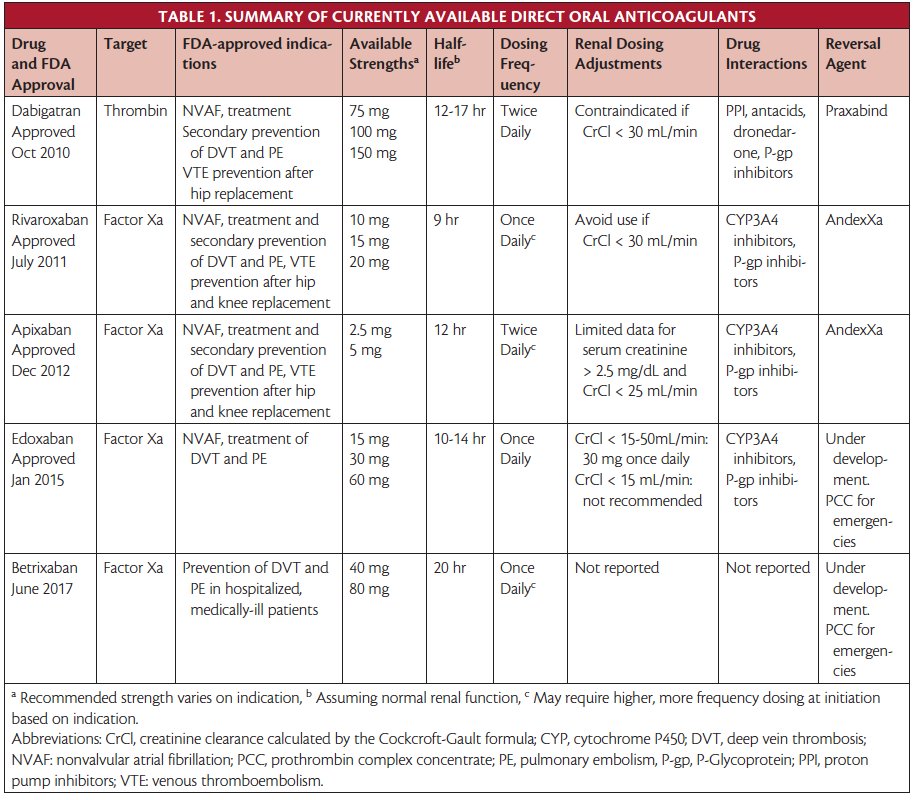 Whether paroxysmal, persistent, or permanent, Afib is a significant risk factor for ischemic stroke, increasing risk at least fivefold, likely an underestimate because of asymptomatic and undetected cases. There is greater risk of recurrent stroke with thromboembolism from Afib. Every patient with Afib requires an evaluation for the need of anticoagulation, typically patients at a moderate to high risk of thromboembolic events as defined by a CHA2DS2-Vasc >2, and careful consideration of bleeding risk.3 Valvular Afib, especially if requiring mechanical prosthesis, is associated with a high risk of systemic thromboembolism. These patients were excluded from the major DOAC trials; therefore VKAs remain the standard of therapy. Here we focus our discussion instead on nonvalvular Afib.

Similar to valvular Afib, VKAs have been the standard therapy for nonvalvular Afib until recently and have shown a significant reduction in stroke, reducing ischemic stroke by two-thirds compared to placebo.4 Due to the advantages of DOACs discussed above, several studies have sought to characterize the safety and efficacy profiles of DOACs compared to warfarin. Results of these studies are summarized in Table 2. Overall, DOACs demonstrated noninferiority to warfarin with a favorable safety profile, largely attributable to decreased intracranial hemorrhage rates. Apixaban and dabigatran are superior to warfarin in the setting of nonvalvular Afib.5,6 DOACs did have higher rates of gastrointestinal bleeding with dabigatran having the highest rate, although still demonstrating risk reduction of major bleeding compared to warfarin.7 Low-dose DOAC regimens had similar efficacy to warfarin for protection against all stroke or systemic embolic events, although not specifically ischemic stroke suggesting low dose regimens may be effective for patients requiring therapy though are at high risk of bleeding on full anticoagulation.4 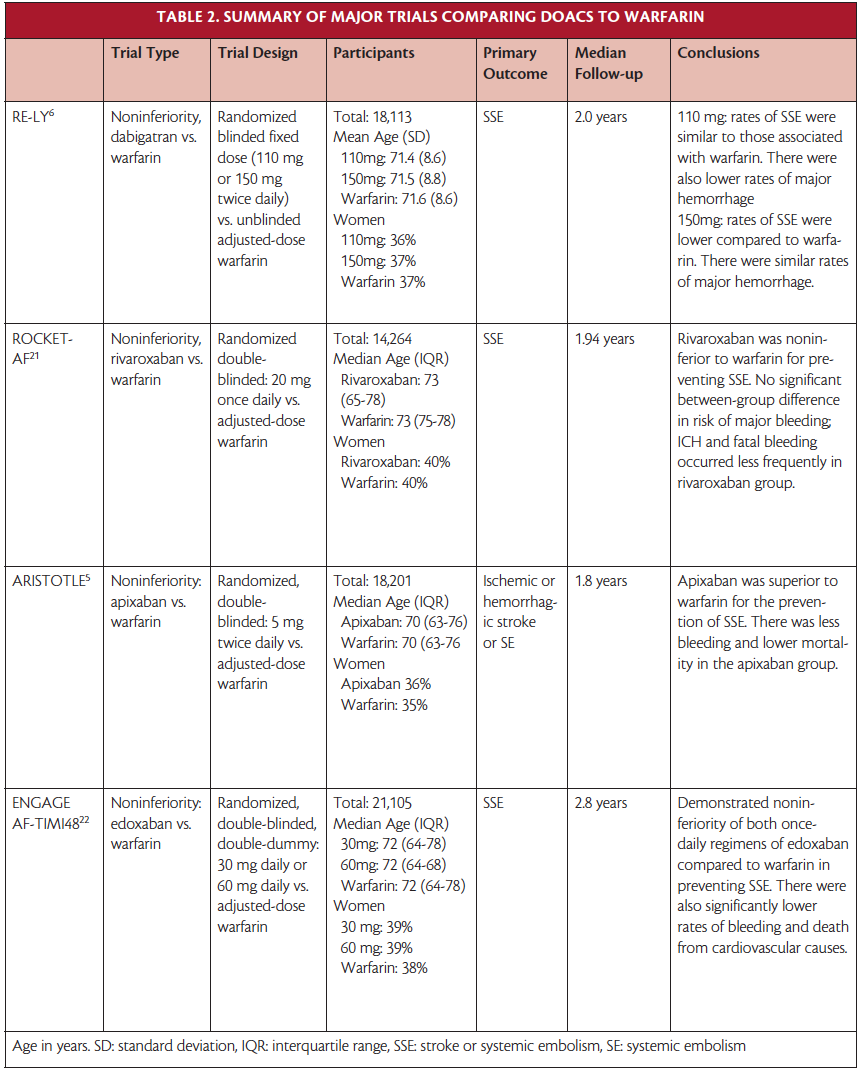 Selection of an anticoagulant should be a shared decision based on concomitant risk factors, patient preference and tolerability, cost, and drug-drug interactions. In patients tolerating VKAs with demonstrated stability in therapeutic INR ranges, continuing this regimen is reasonable. However, in patients unable to continue VKAs, switching to DOACs for prevention of thromboembolism from nonvalvular Afib in patients with prior stroke, transient ischemic attack (TIA), or CHA2DS2-Vasc score >2 is supported by a growing body of evidence including a Class I recommendation from the American College of Cardiology and American Heart Association.3

Left ventricular thrombi (LVT) are a consequence of regional cardiac wall hypo- and akinesis commonly seen following anteroapical myocardial infarction (MI). Even after percutaneous coronary intervention, risk of developing LVT within 3 to 6 months in patients with anterior-MI remains at 5-15%.8 If left untreated (i.e., no anticoagulation) the greatest risk of embolization from LVT occurs in the period immediately following an acute myocardial infarction. However, even at 2 years following echocardiographic detection of thrombus, risk of embolization is 14% representing a significant risk to primary and secondary stroke.9 The 2013 American College of Cardiology Foundation/American Heart Association STEMI guidelines state that anticoagulation therapy with VKA may be considered for patients with STEMI and anterior apical akinesis or dyskinesis (Class IIb recommendation, level of evidence: C), though little work has specifically compared the efficacy and safety of different anticoagulants for this indication.10 It stands to reason that data from Afib are applicable to LVT given their shared mechanism of intracardiac hemostasis.

A retrospective analysis of 98 patients with LVT treated with warfarin, a DOAC (apixaban > rivaroxaban > dabigatran), or another anticoagulant demonstrated no difference in survival free of stroke or systemic embolism at 1 year between warfarin and DOAC-treated groups, suggesting DOACs may be a reasonable alternative to LVT treatment, especially given the decreased bleeding risk.11 Given the well establish efficacy of VKAs it would again be acceptable to continue such a regimen in stable patients tolerating the drug. A risk benefit discussion would be required in patients considering a switch away from VKA acknowledging data supporting a switch is limited. Duration of anticoagulant therapy would be limited to echocardiographic evidence or LVT presence or resolution.

Hypercoagulable states due to inherited or acquired systemic conditions (eg,autoimmune or malignancy) by definition predispose patients to arterial and venous thromboembolism, and are an ongoing risk for ischemic stroke that warrants indefinite anticoagulation. Unlike cardiac indications discussed, the evidence guiding suitable anticoagulation therapy is variable because of the varying pathophysiologic mechanisms for the spectrum of clinical presentations. This variability led to VKAs remaining as the default therapy for longer than the cardiac conditions with low-molecular weight hepranoids (LWMH) also playing a prominent role.

The variability in how the coagulation system is altered across conditions led to uncertainty regarding the reliability of the otherwise predictable pharmacokinetic and pharmacodynamic properties of DOACs. In their 2012 guidelines on antithrombotic therapy for venous thromboembolism (VTE) the American College of Chest Physicians recommended VKA therapy but only commented on antiphospholipid syndrome.12 Their 2016 guidelines however endorsed use of DOACs for VTE therapy without mention of any specific disease process.12,13 There have been no formal recommendations on prevention of arterial thromboembolism/ischemic stroke most likely due to the limited available data.

Post hoc subgroup analysis showed noninferiority of dabigatran when compared to warfarin in patients with thrombophilia for recurrent venous thromboembolism though there was a lack of statistical power. Close to one-fifth of patient in each arm of that study had a thrombophilia with Factor V Leiden mutation being the most common disease.12 Further work, including prospective randomized trials, is needed to further characterize the safety and efficacy of DOACs for different inherited thrombophilias—especially as it applies to primary and secondary stroke prevention. At present, the subgroup analysis taken with extrapolated cardiac data suggests that DOACs may be reasonably safe and effective options for patients with inherited thrombophilias, except in the situation of antiphospholipid antibody syndrome. A recent article comparing warfarin to rivaroxaban in the setting of high-risk patients with thrombotic antiphospholipid syndrome revealed that use of rivaroxaban was associated with an increased rate of events compared with warfarin, thus showing no benefit and excess risk.14 There are ongoing trials assessing the effectiveness of apixaban in the setting of antiphospholipid antibody syndrome in comparison to warfarin.

Decisions to switch from VKAs should be done with caution and with close discussion with a hematologist given the heterogeneity of disease processes and depending on the underlying pathophysiology. In the absence of available data, hypercoagulability from systemic processes likely follow a similar treatment algorithm as the inherited thrombophilias due to similar affected points within the coagulation cascade.

The relationship between malignancy and thromboembolism is complicated. Although malignancy leads to a prothrombotic state (a four- to sevenfold increased risk), therapies aimed at malignancy treatment create conditions that lead to thromboembolism.15,16 Because it is more effective than VKA with a similar safety profile, LMWH is the standard therapy for hypercoagulability secondary to malignancy. Although LWMH has several advantages (eg,no monitoring and fewer drug-drug interactions), daily injections are burdensome to patients. Like inherited thrombophilias, the focus of current literature is venous thromboembolism and data remains limited. In their most recent update to the guidelines for VTE prophylaxis and treatment in patients with cancer, the American Society of Clinical Oncology Clinical Practice do not recommend DOACs for patients with malignancy and VTE.17 However, several network meta-analysis suggests DOACs are more effective with a good safety profile in patients with cancer and VTE.15,16

Direct head-to-head clinical trials are currently underway to study the safety and efficacy of DOACs compared to LMWH and VKAs in patients with malignancy for both primary and secondary prophylaxis. However, uncertainty will remain regarding their use in stroke prevention. For now, use of DOACs remains provider dependent following a risk benefit discussion with patients.

Cerebral venous thrombosis occurs due to thrombosis of the dural venous sinuses and/or cerebral veins, which can lead to venous congestion, ischemia and intracerebral hemorrhage. The treatment of patients with cerebral sinus venous thrombosis is with anticoagulation, typically with IV heparin initially and followed traditionally with long-term anticoagulation with VKAs such as coumadin. During the acute treatment of sinus venous thrombosis with associated intraparenchymal hemorrhages, there often needs to be a balance between preventing ongoing thrombosis and monitoring for hemorrhage expansion. Historically, heparin provides a rapid onset of action as well as reversibility in its anticoagulant effect. DOACs have been found to be an effective alternative to VKAs for the treatment of deep vein thrombosis. Case reports with dabigatran, rivaroxaban, and apixaban have shown favorable results.18,19 RE-SPECT CVT was a recent small study of 120 patients that examined the use of dabigatran in patients with cerebral venous thrombosis. Dabigatran was compared to warfarin adjusted to a target INR of 2 to 3. The primary composite outcome was major bleeding or a venous thrombotic event. There were no thrombotic events observed in either arm, and only three patients, one in the dabigatran arm and two in the warfarin arm, had major bleeds. Although small, this study certainly reinforces the safety of dabigatran in cerebral venous thrombosis.20 These results are not yet published, but were announced at the 2018 World Stroke Congress.

Recurrent ischemic stroke represents a significant financial and functional burden to patients and their caregivers. The risk of recurrent events is multifactorial with conditions necessitating anticoagulation being a significant contributor. DOACs give patients and providers alternatives to traditional VKA therapies, which can be difficulty to maintain or tolerate given other comorbidities. Data for these drugs have become increasable available allowing for more evidence-based guidance in deciding best therapy regimen.

There is ample evidence to support the use of DOACs in nonvalvular Afib, even in patients with renal dysfunction. In patients with a history of gastrointestinal bleeding, apixaban is preferred. Regarding prevention from LVT, data is limited but suggestive of favoring DOACs over VKAs. Recommendations in hypercoagulable states are more varied with data addressing the acute and secondary treatment of venous thromboembolism rather than ischemic stroke. Although inherited thrombophilias have early data to support use of DOACs in the prevention of venous thromboembolism, and therefore possibly may also prevent against ischemic stroke, use of DOACs in antiphospholipid antibody syndrome is not currently recommended. Regardless of the indication, anticoagulant decisions need to be a shared decision after thoughtful discussion of the risks and benefits of the chosen therapy.

The authors have no financial or other relationships relevant to this content to disclose.

Neurology Resident
Department of Neurology
Hospital of the University of Pennsylvania
Philadelphia, PA