Stroke Snapshot: Patient Triage in the Era of Thrombectomy

Stroke systems of care need to advance as stroke care has.

A Giant Leap in Care

Stroke care has been revolutionized with successful thrombectomy trials. The number of patients with acute ischemic stroke (AIS) caused by proximal large vessel occlusion (LVO) needed to treat (NTT) in order to achieve an independent outcome is as low as 2.6 patients.1 With this giant leap in stroke treatment, it is necessary that identification, triage, and transport of patients with stroke is also on par to derive benefits of this treatment modality. Although proximal LVO strokes account for only 30% of AIS, the natural history is associated with fourfold increase in mortality and threefold reduction in functional outcome compared with patients with AIS who do not have proximal LVO.2

Accurate triage at the prehospital level can change outcomes for patients who otherwise would have poor outcomes. Current American Heart Association (AHA) guidelines recommend against bypassing a thrombolysis-capable hospital if the distance to reach an endovascular surgery-capable hospital requires 15 minutes or more additional transport time for patients with suspected LVO that had onset within 6 hours.8 Although this model is applicable for big cities and towns with both primary stroke centers (PSCs) and comprehensive stroke centers (CSCs), in more rural areas, even the closest stroke-ready hospital might be more than 15 minutes away and the nearest thrombectomy capable hospital may be more than 1 hour away. Applicability of this protocol in patients outside of the time window for intravenous (IV) thrombolysis is also debatable. If a patient does not meet criteria for IV thrombolysis, but has a positive LVO screen and is within 24 hours of last seen normal, why not continue on to a thrombectomy center—where timely consideration of revascularization with penumbral imaging that is often limited to these centers—can be provided?

Another conditional-probability model tested optimal triage and transport strategy with a recommendation that triage decision be individualized based on region as transport strategy depends on treatment times at facilities, transport time between facilities, and triage tools in use.11 The RACECATa trial is the only randomized controlled trial evaluating outcomes based on direct transport to endovascular centers vs stopping at a thrombolysis center followed by secondary transfer.

The Role of Imaging

Vascular imaging with either a CT angiogram (CTA) or MR angiogram (MRA) is a noninvasive method to confirm LVO. If a patient is taken to a center capable of providing thrombolysis but not thrombectomy, obtaining CTA/MRA in a timely manner will confirm the diagnosis of LVO and thus emergent transfer. The timing of obtaining perfusion imaging either at a final destination hospital vs a first-stop hospital is also debatable. Utilizing perfusion imaging at a remote hospital will be helpful in excluding patients with small or no penumbra. However, perfusion imaging is just a snapshot in time and patients’ salvageable tissues might still decay during transport. Penumbral decay and infarct growth are directly associated with collateral status as demonstrated in a multicenter study of untreated patients with LVOs.12 Factoring in collateral status in transfer decision making needs to be explored in a prospective study. 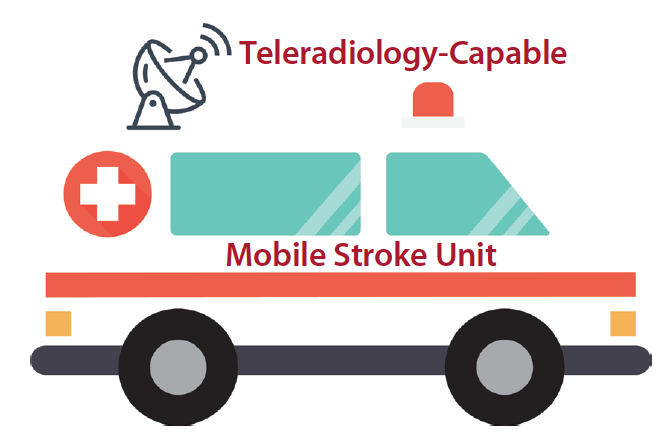 Figure. Mobile stroke units equipped with teleradiology and specially trained personnel may shorten the time to thrombolysis and eventual thrombectomy.

Establishing mobile endovascular teams in high stroke-density regions could mitigate the need for interhospital transfers. Mobile stroke units (MSUs) (Figure) equipped with CTA would also shorten the onset to thrombolysis times and enable correct hospital destination. However, the cost-effectiveness of establishing and maintaining MSUs remains unknown. Although sonothrombolysis did not show significant benefit when combined with IV thrombolysis, exploring use of this technology during interhospital transfer for LVO may help improve outcomes. Quality improvement programs to minimize door-to-needle time and door-in-door out time for transfers need to be established and implemented at the local level.

In conclusion, it is unlikely that a single protocol is going to fit all due to diverse distribution of stroke centers and stroke density. Ultimately, transfer protocols based on region and stroke density will have to be implemented in conjunction with factors such as collateral status, LVO location, and distance between facilities.

a. Direct transfer to an endovascular center compared to transfer to the closest stroke center in acute stroke patients with suspected large vessel occlusion (NCT02795962).

DN reports no disclosures. SM-S is a member of the speakers’ bureau for Genenetech.