Case Report: A Woman with Tinnitus and Tongue Atrophy

Mrs. R., age 72, was referred because of intermittent hemorrhagic otorrhea and pulsatile tinnitus in the right ear. She also reports having daily headaches and hearing loss in her right ear. On examination, she had right tongue atrophy and rightward deviation of her tongue with protrusion. Her brain MRI results showed a large predominantly extracranial right skull base enhancing lesion exiting the jugular foramen (Figure 1).

Considering Mrs. R’s presenting symptoms of pulsatile tinnitus and hemorrhagic discharge from the ear, a catheter angiogram was performed and revealed hypervascularity suggestive of a glomus tumor (Figure 2). Partial embolization was performed to reduce blood flow into the lesion and palliate her otorrhea.

Figure 1. Coronal (A) and axial (B) MRI shows an avidly enhancing glomus jugulare tumor. It extends superiorly within the right cerebellopontine angle and extends through the jugular foramen into the extracranial jugular fossa.

Given Mrs. R’s advanced age, a decision was made not to proceed with surgical resection. Instead, definitive lesion management using fractionated radiotherapy was elected.

Head and neck paragangliomas (PGLs) are highly invasive, slow-growing (0.8-2 mm/year typically), and hypervascular neoplasms composed of glomus cells. Small and large PGLs grow relatively more slowly than those of intermediate size.1-6 Incidence is 2 to 3 times higher in women and PGLs typically occur in the 5th or 6th decade of life, although pediatric (age 12) and late-life (age 78) occurrences have been reported.

Glomus cells are peripheral chemoreceptors that rapidly equilibrate pH, pO2, and pCO2 at the carotid body to maintain homeostasis. Tumorigenesis that disrupts paragangliar cell architecture disrupts homeostasis. These tumors account for just 0.6% of all head and neck tumors and are termed chemoductoma, nonchromaffin PGL, and most commonly, glomus tumors.

Although the majority of PGLs are solitary, approximately 10% of people with head and neck PGL have multiple lesions, which is linked to mutations in the genes coding for succinate dehydrogenase B, C, and D (SDHC). Most commonly, those with multiple PGLs have bilateral tumors in the carotid body.7 Multicentricity is observed in 80% of hereditary cases and in 10% to 20% of the sporadic cases. Although most PGL are benign, in persons with multifocal PGLs, there is a 10% frequency of malignant transformation.8 The succinate dehydrogenase component SDHFA2 has an exclusive affiliation to bilateral head and neck PGLs. In a case series of 175 patients, a single patient who had multiple malignant PGLs corroborated the association of SDHC genetic mutations to multiplicity.9

Glomus cells are derived from neuroectodermal crest cells that travel along the parasympathetic ganglionic tract during the embryonic period, which explains the diverse anatomic sites of glomus tumors (Box).

of the carotid bifurcation may displace and compromise adjacent vascular structures or cranial nerves (CNs).4,11 Although carotid body PGL primarily present as solitary masses, they can be bilateral. There is a 33% incidence of inherited tumors with 80% multifocal presentation within the familial subpopulation.12

Vagus Nerve. Vagus nerve PGLs account for up to 5% of head and neck PGLs,13 typically arise within 2 cm of the extracranial vagus nerve, and egress from the inferior (nodose) ganglia or, less frequently, from the middle or superior ganglia. Subsequently, vagus nerve PGLs progress onto the vagus nerve tract via the following routes4,7:

2. superior extension toward the skull base with extension into the jugular foramen, implicating the internal jugular vein (IJV) and CN IX, XI, and XII, and

3. anteriorly within the neck, displacing the ICA.

In some cases, vagus nerve PGLs may reach the skull base via the jugular foramen or travel back to the mastoid tip,13 occur within the nerve or perineurium and tend to occupy the poststyloid parapharyngeal space, commonly obtruding on the carotid system anteromedially.7

Jugular Fossa. Jugular fossa PGLs may extend intra- and extracranially at or beyond the jugular fossa14 and penetrate the temporal bone and skull base via neurovascular foramina (paths of minimum resistance, multidirectionally). Intracranial tumor invasion may occur via the petrous bone and tumors may advance into the internal auditory canal or infralabyrinthine extension and localize within the jugular vein or along the internal tympanic wall. Intraluminal spread of the jugular vein into the IJV, sigmoid sinus, and inferior petrosal sinus or inferior extension into the infratemporal fossa (ITF) and poststyloid parapharyngeal space indicate paraganglioma encroachment of the jugular fossa.4 Intracranial extension of PGLs can also occur along the facial nerve, in the nose and nasopharynx, the trachea, and optic chiasm and may15 obstruct venous flow via vascular invasion.

Tympanic Cavity. Tympanic cavity PGLs occur along nerves at the tympanic plexus (Jacobson’s nerve) or the upper ganglionic branch of the vagus nerve (Arnold’s nerve) at the cochlear promontory. The tympanic branch of the glossopharyngeal nerve and the auricular branch of the vagus nerve have been found to harbor tympanic paraganglioma.4,11,16 Tympanic PGLs may encompass the middle ear cavity, posteriorly extend into mastoid air cells, and can also involve the jugular bulb. These PGLs may extend into the facial canal, impairing facial nerve function.17

Clinical presentations of head and neck PGLs are diverse, and this pathology has thus been referred to as “a great masquerader.” Nonuniform presentation results from the complex anatomy within the neck and skull base with variable physical, hemodynamic, and metabolic microenvironments. Many patients with head and neck PGL remain asymptomatic because the tumor is often nonfunctional, has low proliferation rates, and resulting mass effect that can be well tolerated.

Jugular foramen PGLs present with symptoms of deficits in lower CNs (CN IX, X, XI, and XII). A palsy of the lower CNs termed Collet-Sicard syndrome may occur in 10% of jugular foramen PGLs.16 Sensorineural hearing loss and pulsatile tinnitus are reported most frequently.

Tympanic PGLs usually present as proliferating unilateral pulsing tumor bodies at or behind the level of the eardrum. Interestingly a bluish tone is sometimes described on direct observation.11 Like jugular foramen PGLs, tympanic PGLs often cause symptomatic pulsatile tinnitus and conductive hearing loss.

When head and neck PGLs are suspected, diagnostic testing should include serum and urine tests for catecholamine metabolites including metanephrines and urinary vanillylmandelic acid (VMA).3,19,20 Results of these tests guide pharmacologic therapy and may be helpful in management of any associated hypertension.

Head and neck PGLs can be imaged with Doppler duplex ultrasound, CT, or MRI. Erosion at the involved skull base foramina and within the temporal bone may be apparent on CT. Intratumoral flow voids producing a characteristic salt-and-pepper appearance are commonly seen on MRI. Perfusion imaging with CT, MR, or single-photon emission CT (SPECT) may provide additional information regarding vascularity. Functional imaging with PET, conventional scintigraphy, and otreotide scan have also been utilized. Interestingly, 25% to 30% of head and neck PGLs are found incidentally.21-23 The differential diagnosis for PGL is broad and varies with location (Table). 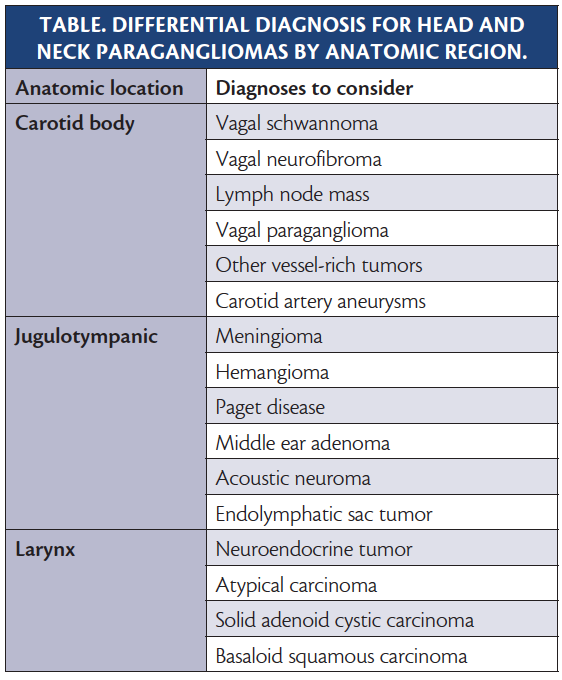 Because PGLs are typically benign, slow growing, and invasiveness there are a number of management options for PGL ranging from conservative to maximally invasive.

Preoperative Embolization. Endovascular embolization is used preoperatively for selective occlusion of arterial feeders to the tumor. Presurgical embolization attempts to devascularize the tumor mass such that intraoperative blood loss is minimized and visualization of surgical planes are optimized.

Surgical Considerations. Complete extirpation of PGLs is often feasible with an excellent long-term prognosis. Surgery may be indicated for very large tumors, resulting in symptoms from mass effect on vital structures such as the airway or neural structures including CNs or the brainstem. Postoperative CN deficits are reported in 8.7% to 12.0% of cases. Lower CN palsy, which may be transient, affects 22% to 100% of patients treated surgically.8,26 Following radical resection, acute postoperative complications include hypotension and hypoglycemia. Hypotensive crisis can be precipitated by the rapid reduction of vasoactive substance secretion following resection.19

Stereotactic Radiosurgery. Stereotactic radiosurgery (SRS) is an excellent therapeutic technique as a primary or adjunctive modality for head and neck PGL. The most widely used SRS systems are the Gamma knife and Cyberknife devices. In a meta-analysis of 203 patients in 9 studies, overall tumor shrinkage was seen in 11% to 50% of cases and the total tumor recurrence rate was 6%. Clinical improvement was achieved by 50% of patients and the morbidity rate was less than 5%.27

Radiotherapy. External beam fractionated radiotherapy (EBRT) is a therapeutic treatment option especially used in patients of advanced age or who have significant medical comorbidities. It is also preferred for patients who harbor large, inoperable PGL that are not candidates for radiosurgery. Although this technique has been criticized because of the potential for adverse radiation effects on the adjacent healthy tissue, excellent local tumor control rates of 74% to 97% have been reported.8,27

8. Marchetti M, Pinzi V, Tramacere I, et al. Radiosurgery for paragangliomas of the head and neck: another step for the validation of a treatment paradigm. World Neurosurg. 2017;98:281-287.

28. Chrisoulidou A, Kaltsas G, Ilias I, Grossman AB. The diagnosis and management of malignant phaeochromocytoma and paraganglioma. Endocr Relat Cancer. 2007;14(3):569-585.

2019 Drug and Device Approvals in Neurology
Fibromuscular Dysplasia and Stroke