Extensive workup is necessary when evaluating individuals with seizures and behavioral changes.

Mr. L. is a white man, age 67, who presented after several weeks of personality changes, paranoid behavior, emotional lability, and encephalopathy. At admission, he experienced a generalized tonic-clonic seizure and was found to have hyponatremia (Na+ = 119 mEq/L), which was treated. When his sodium levels had normalized, he was discharged. Later he returned, having another generalized tonic-clonic seizure and was again noted to have hyponatremia. Despite sodium correction, his mental status continued to deteriorate. He appeared confused with difficulty remembering, paranoia, and emotional lability.

Mr. L had a brain MRI with and without contrast, lumbar puncture and cerebrospinal fluid (CSF) analysis, video-EEG, a full-body fluorodeoxyglucose positron emission tomography (FDG-PET) scan, and serum antibody testing (Table). He also had video-EEG that showed mild generalized slowing but no ictal foci. During monitoring, he had subtle twitches of the left side of the face, shoulder, and arm intermittently. 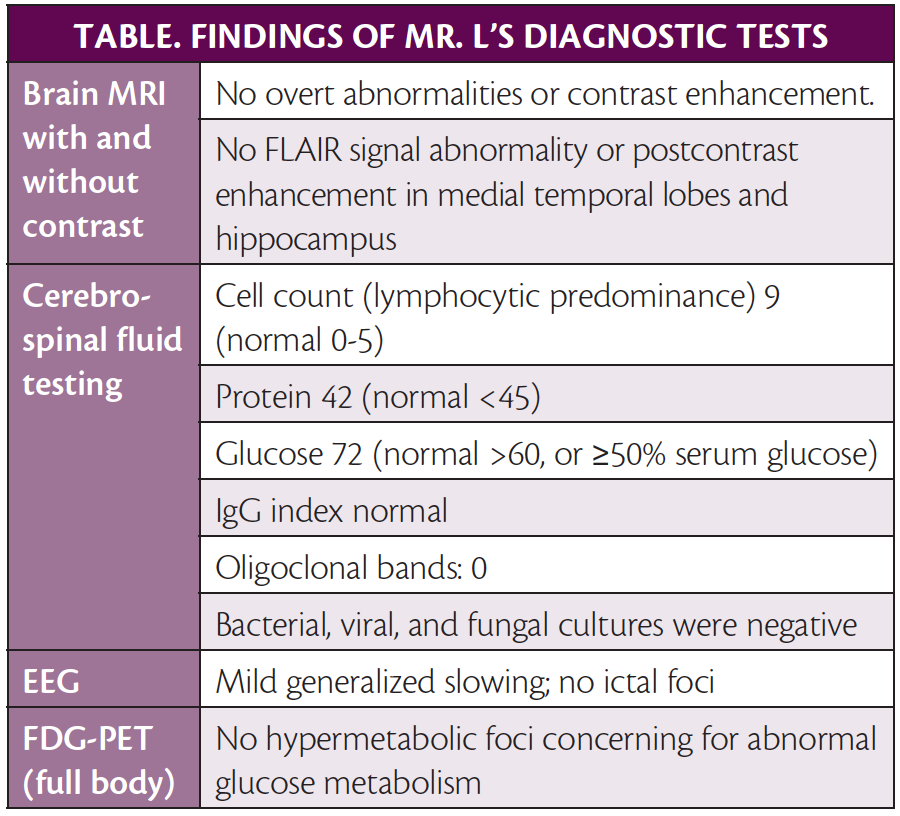 Mr. L. was treated with intravenous high-dose steroids, and his encephalopathy and hyponatremia gradually resolved, with some persistent difficulties with memory. He subsequently received 1 gram rituximab to achieve B-cell depletion in an attempt to decrease the risk of relapses. At 6-month follow-up, he was relapse free and improving.

Leucine-rich, glioma inactivated 1 (LGI1) protein binds ADAM23 to ADAM22 and facilitates inhibitory signal transmission between the presynaptic potassium channel and the postsynaptic AMPA receptor. Previously, LGI1 was classified as a part of voltage-gated potassium-channel (VGKC) complex, but this term has been abandoned because it was shown that antibodies to LGI1 are not directed against the potassium channel itself, but rather against some associated proteins. Patients who are positive for antibodies to VGKC may also be positive for LGI1 antibodies and CASPR-2 antibodies. The 3 groups exhibit strikingly different clinical phenotypes, however, and in the absence of LGI1 or CASPR-2 antibodies, the positivity to VGKC antibodies is of questionable clinical significance.1

Anti-LGI1 antibody-mediated autoimmune encephalitis typically occurs in older adults (median age 60). Men are affected more commonly than women. It can present with twitches in the face and upper extremity termed faciobrachial dystonic seizures (FBDS) and subacute personality and behavioral changes that are typical of limbic encephalitis. These patients can also experience generalized tonic-clonic and autonomic seizures (ie, flushing, shivering, and pilomotor). Hyponatremia is observed in 60% to 70% of patients with anti-LGI1 antibody encephalitis.2-4 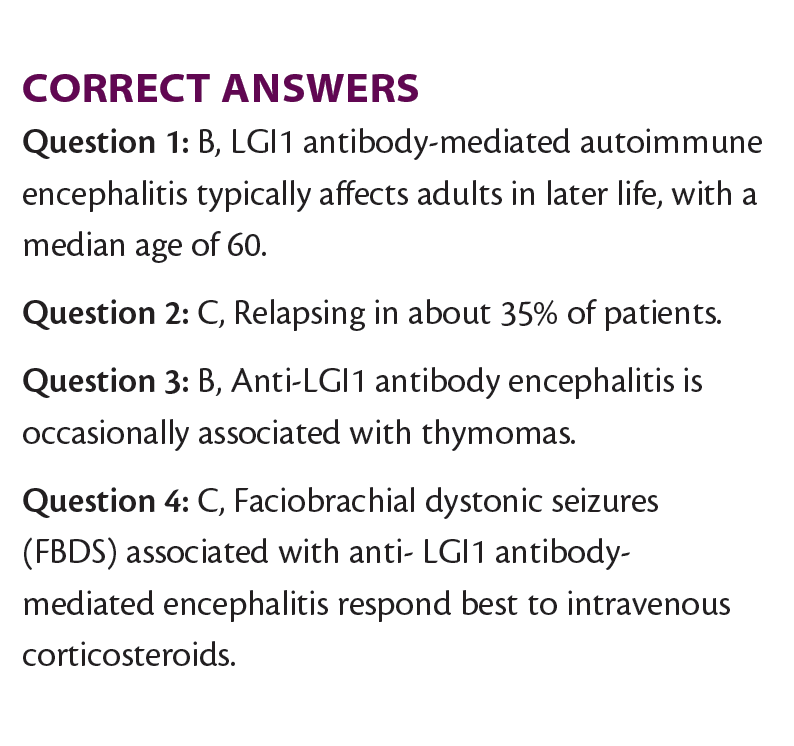 Presenting as simultaneous twitches of the ipsilateral face, shoulder, and arm (or leg) that are typically brief (< 3 seconds), FBDS occur in clusters up to hundreds of times per day. The FBDS are rarely associated with ictal abnormalities on EEG. These seizures frequently fail to respond to the standard antiepileptic medications but are typically highly responsive to immune therapies, such as intravenous corticosteroids.5

Anti-LGI1 antibody-mediated encephalitis is only rarely associated with tumors, including thymoma.6,7 The majority of cases are nonparaneoplastic autoimmune in etiology.

Anti-LGI1 antibody-mediated encephalitis typically responds well to intravenous corticosteroids followed by prednisone taper, but about 35% of patients experience relapses. Patients must be weaned off steroids slowly, and preventive treatment with rituximab, which depletes B cells, should be considered because of the risk of relapse.7,8 It is not known for how long rituximab should be continued, but most clinicians will continue it for 1 to 2 years, administered every 6 months, and then attempt to stop.

A Neurologist Goes to Business School

Case Report: A Woman with Tinnitus and Tongue Atrophy