What do we know and where do we go from here?

Despite improvements over the last decade, stroke remains the fifth leading cause of death and the leading cause of long-term disability in the US.1 Approximately 30% of strokes remain cryptogenic upon hospital discharge, despite extensive workup. A significant portion of people with cryptogenic strokes are eventually diagnosed with atrial fibrillation (AFib).2 Several classification systems have been developed to describe the etiology of stroke, with the Trial of Org 10172 in Acute Stroke Treatment (TOAST) being the most widely recognized and useful because it includes both cryptogenic stroke and incomplete workup. However, no scheme defines the workup required for stroke to be considered cryptogenic. Additionally, the category of embolic stroke of unknown source (ESUS) became a subcategory in 2014 but is not included in these classification schemes. Appropriate classification of stroke is essential to direct optimal secondary stroke prevention, including medication regimens.

A subcategory of ischemic cryptogenic stroke, ESUS denotes specifically nonlacunar stroke in people without an immediately identifiable etiology (eg, large vessel disease, significant intracranial atherosclerosis, or major risk of cardioembolic source). A recent series reports ESUS prevalence of 16% to 32%. Stroke recurrence rates for ESUS are similar to that of cryptogenic stroke, ranging from 9.1% at 1 year to more than 30% at 10 years.5 Despite being considered embolic, the origin of the embolism is not clear after appropriate workup. Among potential sources are aortic arch atheroma, large or small vessel emboli, or cardiac emboli, such as seen in AFib. Standard treatment of people after ESUS is antiplatelet therapy10,11 and risk factor modification including treatment of hypertension and hyperlipidemia. Studies suggest that people who had ESUS have a recurrent stroke risk of 4.5% per year. It is possible, however, that up to 30% of these individuals may go on to develop AFib10 and require significantly different management. Detection of AFib after ESUS or cryptogenic stroke allows for targeted secondary prevention; however, it cannot be ensured that this was the cause of the initial infarct.

The etiology of ESUS is presumed embolic, yet by definition, the source of embolism is unknown. Guidelines recommend antithrombotic therapy for secondary prevention; however, it has been hypothesized that anticoagulation may be superior to antithrombotic therapy for secondary prevention of stroke in this population. Recently, 2 negative trialsa,b have been reported regarding treatment of the ESUS population.12,13 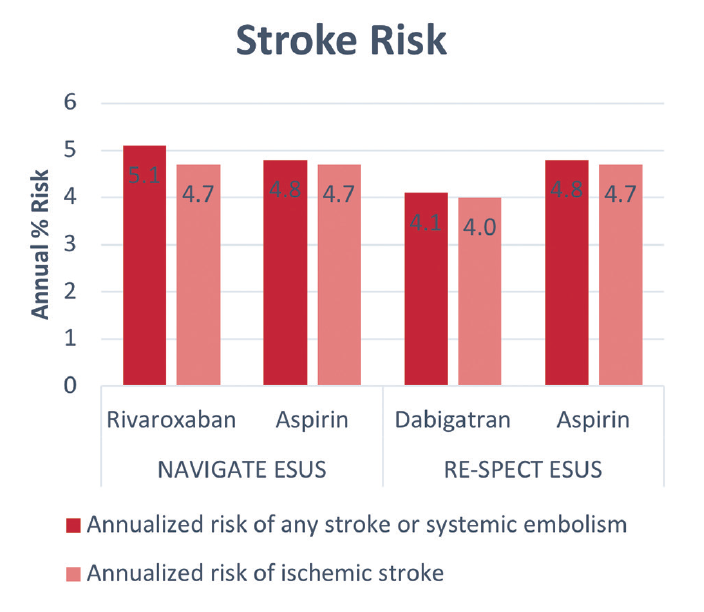 Figure 1. Comparison of stroke risk in NAVIGATE ESUS12 vs RE-SPECT ESUS trials.13,14 No difference between rivaroxaban and aspirin, or dabigatran and aspirin was found for either any type of stroke or systemic embolization, or in risk of ischemic stroke. 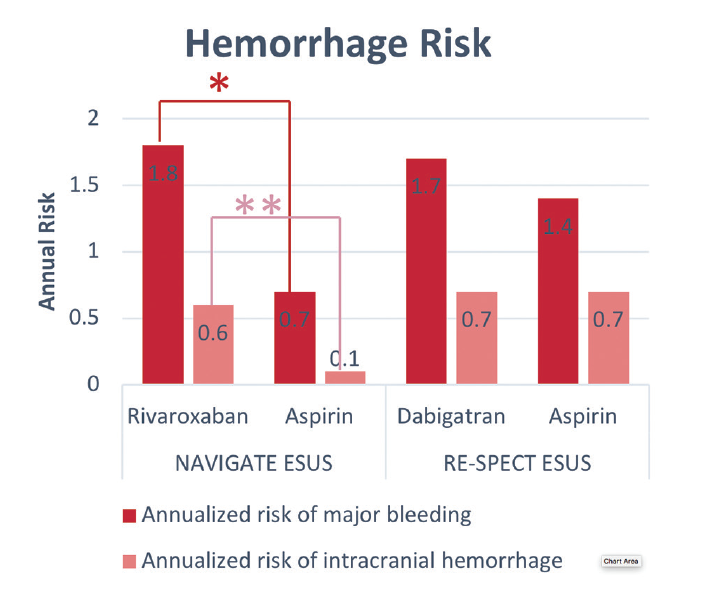 Dabigatran was not found superior to aspirin for prevention of secondary ischemic stroke (ischemic, hemorrhagic, or other) in both groups (n = 5,390). The annual rate of any stroke after treatment with dabigatran was 4.8 vs 4.1 after treatment with aspirin, which was not a statistically significant difference. The annual rate of ischemic stroke was 4.0% and 4.7%. respectively, again not of statistical significance (Figure 1). Major bleeding occurred in 1.7% of participants treated with dabigatran per year vs 1.4% per year after treatment with aspirin, also not significantly different statistically. Intracranial hemorrhage was not different between the 2 groups (0.7%/year) (Figure 2). Although no significant difference was found between the groups, results do suggest the risk of major bleeding increases with age, decreased renal function, and vascular disease.15

Another trial is comparing apixaban to aspirin for secondary prevention of ischemic stroke in people who had ESUS, measured with MRI 12 months after the initial event compared with baseline imaging.c Secondary endpoints include combination of recurrent ischemic or hemorrhagic stroke, or systemic embolism, major adverse cardiovascular event, and combination of major and nonmajor bleeding events. Estimated completion date for this trial is February 2021.16

There is also a multicenter studyd comparing apixaban to aspirin for prevention of recurrent stroke after a cryptogenic ischemic stroke within ESUS definitions. The primary outcome is occurrence of new stroke of any type over a period of up to 4 years. Secondary aims include determining incidence of ischemic stroke or systemic embolism, incidence of any stroke type, and death from any cause. Symptomatic intracranial hemorrhage and other major hemorrhage are the primary safety measures, and the study aims to enroll 1,100 patients. The estimated completion date is April 2022.17

Direct oral anticoagulants rivaroxaban (factor Xa inhibitor) and dabigatran (direct thrombin inhibitor) have been shown to have equivalent efficacy and improved safety compared with warfarin. Direct oral anticoagulants were not found superior to aspirin for secondary stroke prevention in the ESUS population without a diagnosis of AFib. Considered secondary to embolism, ESUS strokes are actually of unknown origin. If cardiac embolism is the source, it is presumed that anticoagulation offers better protection from future cardioembolic stroke compared with aspirin in people with AFib. These data also suggest that true etiology of many ESUS strokes may not be secondary to cardioembolism or that the populations in the completed trials were too diverse to see a positive impact. Redefining and narrowing the scope of the population considered to have had ESUS may improve the outcomes of focused research.14 Ongoing studies focus on ESUS subgroups and may elucidate appropriate treatment in more specific populations. In conclusion, people who had ESUS without evidence of AFib should continue to be treated with antiplatelet therapy.

4. Kernan WN, Ovbiagele B, Black HR, et al. Guidelines for the prevention of stroke in patients with stroke and transient ischemic attack: a guideline for healthcare professionals from the American Heart Association/American Stroke Association. Stroke. 2014;45(7):2160-2236.