Vasculitis Presenting as a Hypertensive Crisis With Back Pain

Because laboratory and imaging studies may not be sensitive enough to detect central nervous system vasculitis, maintain a low threshold for further evaluation when clinical suspicion is high.

Ms. J, age 45, has been diagnosed with Sjögren's syndrome (SS), systemic lupus erythematosis (SLE) with associated myositis, and polyarticular inflammatory arthritis. She has been chronically treated with low-dose prednisone, and was admitted with a maculopapular rash thought to be due to a hypersensitivity reaction to trimethoprim-sulfamethoxazole that was started to treat a gluteal abscess. As her abscess improved, she was switched from trimethoprim-sulfamethoxazole to vancomycin but quickly developed a hypertensive crisis (blood pressure [BP] 209/106) associated with headache, altered mentation, and lethargy. Ms. J. was started on intravenous antihypertensives, and her BP improved.

After her BP was under control, Ms. J had a brain MRI with findings of bilateral posterior-predominant multifocal nonenhancing bilateral T2 hyperintensities (Figure 1A). Initially these findings were considered indicative of posterior reversible encephalopathy syndrome (PRES) secondary to severe hypertension. Central nervous system (CNS) vasculitis associated with SLE or SS was initially low on the differential, although because of Ms. J's history of autoimmune disease, an MR angiogram (MRA) of the head was performed. The MRA findings showed normal vasculature, supporting a cause other than vasculitis for the lesions. 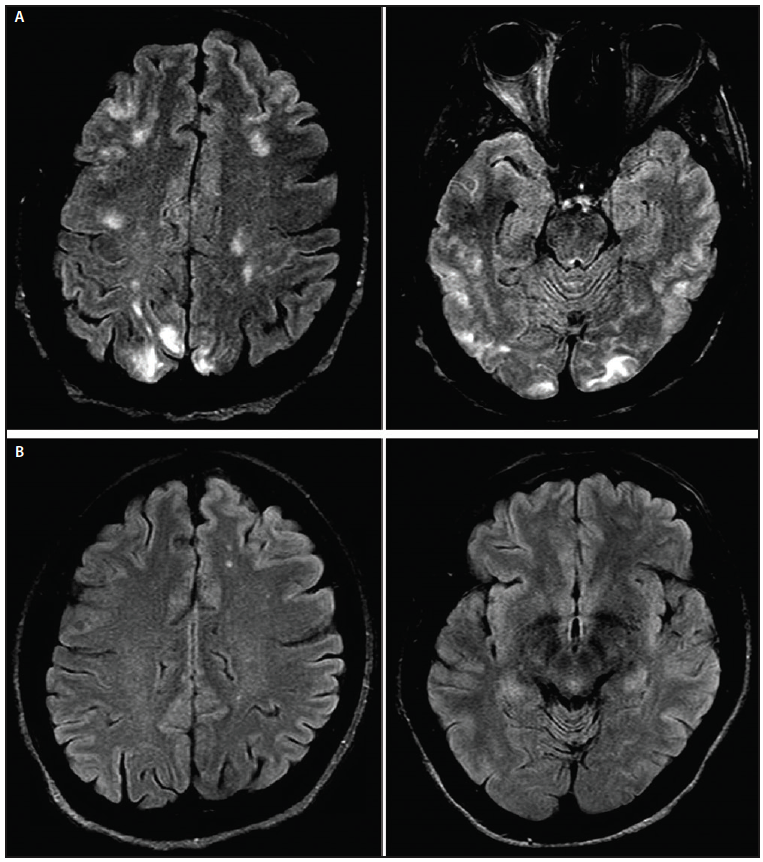 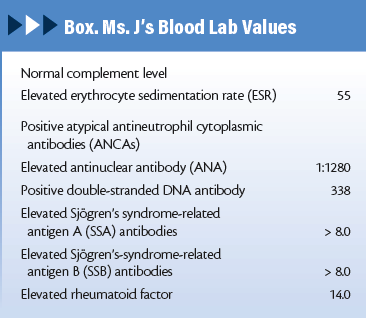 Ms. J's renal and liver function test results were unremarkable; all significant laboratory values are shown in the Box. A lumbar puncture was not performed because Ms. J began to improve clinically as her BP was controlled.

Development of Back Pain

Although her hypertension and encephalopathy resolved with medical management, Ms. J subsequently developed severe back pain, which was minimally responsive to pain medication, several days after her initial presentation.

Additional imaging was done to assess for anatomical or vascular etiologies of Ms. J's back pain, and thoracic MRI revealed an extramedullary fluid collection indicative of a subdural spinal hemorrhage (Figure 2). Because of the subdural hemorrhage, a spinal angiogram was performed and showed segmental stenosis in the anterior spinal artery and fusiform pseudoaneurysm from T10 to T11 levels (Figure 3A), consistent with spinal vasculitis. Because this discovery caused new suspicion that the brain MRI findings reflected vasculitic changes rather than PRES, a cerebral angiogram was performed and revealed an irregular beading pattern suggestive of vasculitis in multiple different vascular territories (Figure 3B). 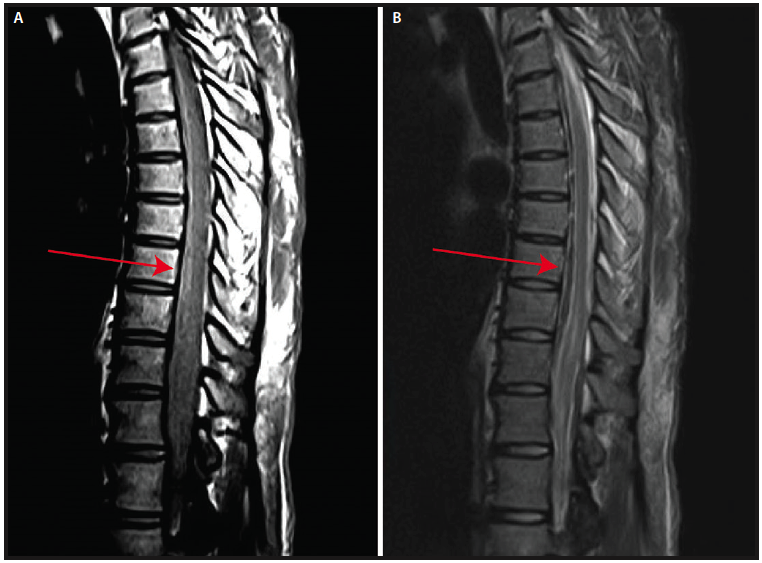 Ms. J began receiving high-dose methylprednisolone and rituximab, and her headaches and back pain resolved.

Central nervous system vasculitis has been associated with rheumatological diseases (eg, SLE or SS), but remains a rare entity with both unique diagnostic challenges and potentially severe consequences. Prompt diagnosis is of utmost importance in order to prevent complications

that may include stroke or hemorrhage. As illustrated by this case, MRA may not be sensitive enough to detect CNS vasculitis, and there should be a low threshold for further evaluation if clinical suspicion is high.

It is estimated that systemic vasculitis occurs in 10% of patients with rheumatological diseases, most commonly described as a small vessel vasculitis in the setting of SS, SLE, or rheumatoid arthritis.1 Manifestations in the CNS occur in 4% to 6% of persons with SS2-3 and in a variable but large proportion of patients with SLE.4-6 Neurologic manifestations from CNS vasculitis are significantly less common in systemic rheumatological conditions, likely occurring in only about 1% of persons with SS2 or SLE.7

CNS vasculitis is associated with several rheumatological conditions and presents with varied symptomatology.

The clinical presentation of CNS vasculitis is often nonspecific (eg, headache, encephalopathy),8 which reflects the global nature of the disease. Other less common manifestations include strokes, seizures, cranial nerve palsies, or myelopathies. Because clinical presentation is often nonfocal, recognizing the signs and symptoms of CNS vasculitis can be challenging. The non-localizing presentation makes the differential diagnosis broad and increased recognition of the condition is necessary for prompt and accurate management of this potentially devastating condition. 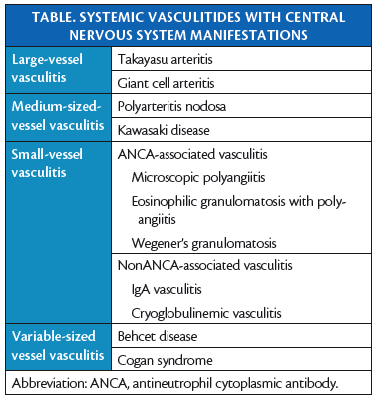 Common CNS manifestations of SS include myelitis and cerebral hyperintensities leading to focal neurologic symptoms. In contrast, CNS manifestations of SLE are more varied and may include encephalopathy, psychiatric illness, myelitis, strokes with or without vasculopathy from procoagulant antibodies, and seizures.2, 6 Although there have been isolated case reports of patients with CNS vasculitis presenting with spinal involvement causing hemorrhage,9-15 this is an exceedingly rare phenomenon. Although it is even more rare, primary CNS vasculitis can occur in the absence of systemic disease.16 Systemic vasculitides that may lead to CNS manifestations are listed in the Table.

Laboratory Testing. Even when clinical suspicion for vasculitis is high, it remains difficult to diagnose, as seen in the case of Ms. J who has a number of rheumatological conditions including SS, SLE, and polyarticular inflammatory arthritis. She was found to have CNS vasculitis affecting both cerebral and spinal vessels. Ms. J's initial blood work revealed only modestly elevated ESR and normal complement levels. This finding illustrates how important it is to recognize that although decreased complement levels resulting from immune complex deposits may aid in diagnosing immune-complex vasculitis, normal complement levels do not sufficiently rule it out. Even with normal ESR and complement levels, further testing is warranted.17 Additionally, the positive atypical antineutrophil cytoplasmic antibodies (ANCAs) test result seen in this case has also been described in the presence of SS alone and does not provide clear evidence of vasculitis.18 Because serum evaluation is often not sufficient in providing a diagnosis, as in this case, imaging studies are necessary.

Imaging Studies. In the case presented, the initial brain MRI demonstrated bilateral predominantly posterior cerebral T2 hyperintensities thought to be diagnostic of PRES,19 which was consistent with the clinical presentation of encephalopathy and hypertensive crisis. It should be noted, however, that although PRES may be caused by hypertension, it has also been reported in the setting of rheumatological conditions including SS, even in the setting of normal blood pressure and absence of other contributing etiologies.20,21 It is interesting to note that reports of PRES in the setting of rheumatological disease typically do not include conventional angiography or brain biopsy, and therefore, a vasculitis causing such reversible MRI abnormalities cannot be ruled out. In the case presented here, because Ms. J's MRI abnormalities resolved with immunotherapy, we cannot rule out PRES, although in the presence of angiogram-proven vascular abnormalities, cerebral vasculitis is deemed much more likely.

Because of Ms. J's initial encephalopathy and brain MRI abnormalities, MRA was performed and demonstrated normal vasculature, which was interpreted as proving the absence of vasculitis. Although MRA is considered sufficiently specific in demonstrating vessel stenosis, it is essential to recognize that it is not sufficiently sensitive to detect small vessel vasculitic change. False positives are low and comparable to that of conventional angiography; however, false negative rates of 44% to 55% have been reported.22

MRA is not sufficiently sensitive for detection of CNS vasculitis, with false negative rates of about 50%.

If clinical suspicion is high for vasculitis and MRA is unrevealing, conventional angiography is indicated.

Lumbar Puncture and Cerebrospinal Fluid Evaluation. Eval-uation of CSF with lumbar puncture remains potentially useful in the diagnosis of vasculitis, and abnormalities (eg, lymphocytic pleocytosis and elevated protein) are detected in 80% to 90% of patients with CNS vasculitis.23 Lumbar puncture and CSF analysis were not done in this case because of the patient's rapid clinical improvement, and an angiogram was deemed necessary following the spinal hemorrhage regardless of presence or absence of CSF abnormalities. In this case, the utility of a lumbar puncture is questionable, as mild pleocytosis and elevated protein levels are both nonspecific and occur in both vasculitis and PRES.24 Oligoclonal bands, in contrast, have been reported in a minority of patients with CNS vasculitis and may have been helpful diagnostically had they been present.23

Interestingly in this case, Ms. J's severe back pain, which developed after improvement in her encephalopathy, is what ultimately led to the diagnosis of CNS vasculitis. Back pain remains a rare presenting symptom of CNS vasculitis. Spinal hemorrhage is a rare potential sequelae of CNS vasculitis,9-16 usually reported as subarachnoid hemorrhage. Spinal subdural hemorrhage is generally associated with trauma or iatrogenic causes such as lumbar punctures.25 The spontaneous nontraumatic spinal subdural hematoma seen in this case is exceedingly rare and has been reported in the setting of vasculitis only in a handful of isolated case reports.9,15

The reported case adds to the limited data on CNS vasculitis associated with rheumatologic conditions and elucidates the difficulties in diagnosis of this rare but potentially severe entity, especially if there is an unusual presentation and nondiagnostic initial imaging. Importantly, MRA is not a sufficiently sensitive modality for diagnosis of CNS vasculitis, and an unrevealing MRA may provide physicians with a false sense of security, potentially leading to delays in diagnosis and appropriate treatment. Conventional angiography is an underutilized tool that should be considered when there is high clinical suspicion for CNS vasculitis. Failure to promptly diagnose and treat CNS vasculitis can lead to potentially devastating complications such as ischemic events or hemorrhages.

AH has received consulting fees from Teva Pharmaceuticals. The authors have no other relevant financial or other relationships to disclose.

When to Refer Patients With Pain for EMG

Why Are Clinical Trials for People With Alzheimer's Disease So Challenging?