Mood disorders are significant comorbidities and frequently undertreated, despite growing evidence of benefits of treatment.

It seems intuitive that stroke survivors, especially those facing significant disabilities, experience mood disturbances at some point during their recovery. Feelings of hopelessness, worthlessness, guilt, sadness, and tearfulness along with sleep and appetite disturbances, are common among stroke survivors. These symptoms are often unrecognized as significant comorbidities and are frequently undertreated, despite growing evidence for the beneficial effects of available pharmacologic and behavioral interventions. Clinicians caring for stroke survivors are often faced with a variety of complaints that are difficult to discern and can be indicative of a mood disorder. Most clinicians focused on stroke are not well-equipped for tackling these symptoms and may lack the training and expertise to screen and diagnose mood disorders. Often, because of the need for simplicity and lack of time, these complaints in patients who have experienced stroke are overlooked. Mood disorders that develop after stroke are diverse in presentation and become additional stressors for patients and caregivers, negatively affecting their quality of life.

In 1977, it was proposed that depression and mood disorders be considered a specific complication of stroke rather than a simple and expected reaction to disability.1 Since then, researchers have successfully described the high prevalence and primary clinical and psychosocial correlates of the neuropsychiatric sequelae of stroke. Several longitudinal studies found that individuals affected with poststroke depression (PSD) had a significantly greater impairment in daily-living activities, poorer quality of life, and increased morbidity and mortality compared with nondepressed stroke survivors.2 Research on poststroke mood disorders has focused on PSD and pseudobulbar affect (PBA). Other mood disorders that can equally affect quality of life (eg, anxiety, posttraumatic stress disorder [PTSD], and adjustment disorder) have been less frequently studied. Limitations in studies include wide variations in screening tools and cutoff scores, timing and setting of screening, use of different exclusion criteria, and variable statistical models, all of which make interstudy comparisons and systematic reviews challenging.3 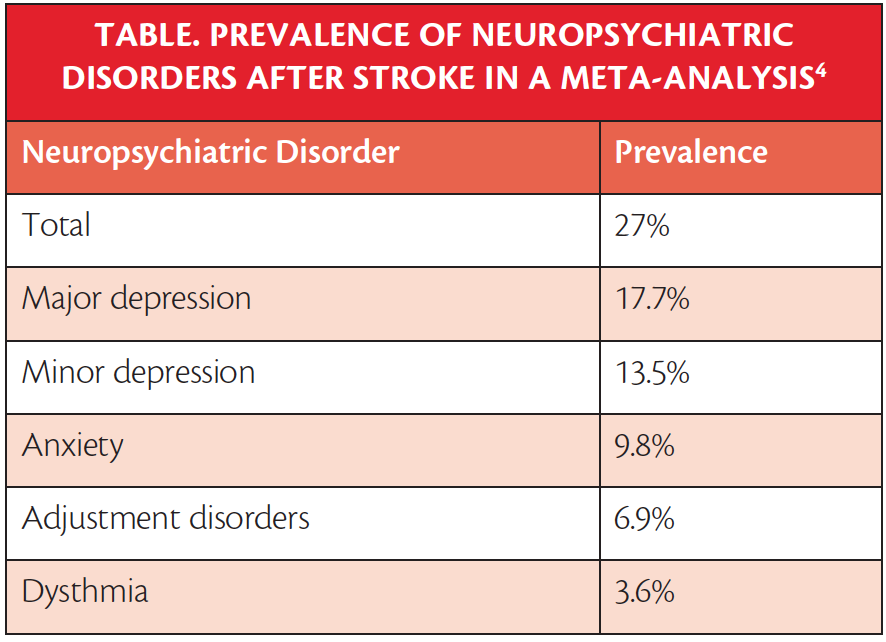 Recently a meta-analysis and metaregression of 147 studies and more than 15,000 stroke survivors with a robust methodology was completed. The overall pooled prevalence of PSD from this meta-analysis is shown in the Table.4 Other neuropsychiatric disorders like PTSD and aggressive or apathetic personality changes have reported prevalence rates ranging from 10% to 57%.3 It is accepted that approximately one-third of stroke survivors experience depression. Incidence decreases and recovery increases over time, although some individuals may experience persistent depression and others may develop late-onset depression. The best time to screen formally for the possible presence of PSD is uncertain.5

There are conflicting data regarding predictive factors for depression and other mood disorders after stroke. The complex association between demographic factors, comorbid conditions, clinical outcomes (eg, stroke severity, type of disability), and premorbid psychological issues as potential risk factors have been the topic of much research. History of prior depression, type of functional impairment, the presence of cognitive deficit, and stroke severity have been commonly reported in several studies as risk factors for PSD.2,3,5 Studies have also investigated the potential impact of stroke-related features such as size, location, and lateralization. Despite extensive research, systematic reviews have shown that neither the anterior-posterior nor the right-left hemispherical localization of the lesions is a risk factor.6,7 In a recent meta-analysis, it was reported that a relative risk of major depression was 50% higher and the relative risk of any depressive disorder was 26% higher following left (dominant) hemisphere stroke.7 Large lesion volume, silent infarcts, and subcortical small vessel disease are linked with increased risk of depression after stroke.6,7 Review of the proposed pathophysiology of mood disorders after stroke is beyond the scope of this manuscript.

The high prevalence and diverse manifestations of mood disorders in patients recovering from stroke and growing evidence that family members and caregivers may also experience depressive symptoms emphasize the need for a system of care that ensures consistent clinical practices across settings.

All patients who have experienced stroke should be considered to be at high risk for PSD. Active and ongoing screening, including evaluation of risk factors, should take place at various stages throughout the continuum of stroke care, and especially at transition points. Use of validated tools can maximize detection of depression. The PHQ-2 and PHQ-9 are both suitable depression-screening tools in patients recovering from stroke. Both of these take less than 5 minutes to complete and have high sensitivity and specificity.8 Other scales like the Geriatric Depression Scale (GDS) and the Hospital Anxiety Depression Scale (HADS) appear not to be as useful for patients recovering from stroke as for other populations.9 Screening tools that are appropriate for patients with communication challenges are highly recommended, and it has been reported that the Stroke Aphasia Depression Questionnaire (SADQ-H10) is the most appropriate tool for depression and anxiety screening in patients with aphasia.10 The Neuropsychiatry Inventory, personality scales and questionnaires, and the Impact of Events Scale have been proposed as good screening tools for other mood disorders, although there are no specific supportive data in people recovering from stroke.2 Patients who are identified as having a high probability of PSD should be assessed by a health care professional with expertise in diagnosis, management, and follow-up of persons with depression. A diagnosis of PSD should be made using a structured clinical interview and not screening tools alone. Diagnosis of PSD should follow the Diagnostic and Statistical Manual of Mental Disorders (DSM) criteria.5

All patients who have had a stroke and have persistent symptoms of a mood disorder should be treated, especially if such symptoms interfere with day-to-day functioning and recovery goals. Initiation of and response to treatment should be monitored regularly by a health care professional. Monitoring should include evaluating changes in the severity of symptoms, review of side effects, and update of ongoing management plans. If a good response is achieved, treatment should be continued for a minimum of 6 to 12 months with the goal of preventing a relapse of the mood disorder.2,3,5

There are insufficient data supporting effectiveness of nonpharmacologic therapy (eg, cognitive behavioral therapy or interpersonal therapy) as a monotherapy for treating mood disorders in patients also recovering from stroke. It is reasonable to consider nonpharmacologic therapy in combination with antidepressants.5 Further research about the usefulness of other adjunctive and emerging therapies is needed. These include physical exercise, music, mindfulness, acupuncture, deep breathing, meditation, visualization, hyperbaric oxygen, and repetitive transcranial magnetic stimulation. Improvement in symptoms and prevention of depression was evident for psychotherapy, although treatment effects were small.11

Antidepressants have been shown to reduce the number and severity of depressive symptoms and episodes, despite treatment-associated adverse events. No specific drug or drug class has been found superior. Side effect profiles suggest that some selective serotonin reuptake inhibitors (eg, fluoxetine, paroxetine, and sertraline) may be preferable for patients who have had a stroke.5 Choosing an antidepressant requires considering symptoms; potential side effects, particularly in the older adult; drug interactions with concurrent medications; and underlying disease conditions. Psychostimulants like methylphenidate may be useful treatments for patients with PSD. The early initiation of antidepressant therapy in individuals without symptoms of depression to prevent PSD is still up for debate. In a meta-analysis, there was no apparent effect of pharmacologic therapy on prevention of PSD or other poststroke mood disorders.11 In contrast, another study suggested early initiation of antidepressant therapy, especially fluoxetine, escitalopram, and nortriptyline, in nondepressed individuals may be useful in preventing PSD.2

Despite growing knowledge and understanding of the phenomenology, predicting factors, and pathophysiology of these entities, many questions remain unanswered, and further research is needed.

The author has no financial or other relationships to disclose.

Movement Disorders Moment: Shining a Light on the Off Periods of Parkinson's Disease