Epilepsy occurs equally among men and women. Many patients have epilepsy during their reproductive years, which creates challenges regarding contraception and pregnancy. Understanding the implications of epilepsy and the primary treatment, antiepileptic drugs (AEDs), on reproductive health is necessary and integral in particular to the care of women with epilepsy.

Although most discussions about reproductive health focus on pregnancy, women generally spend the majority of their reproductive years avoiding pregnancy. Effective contraception is important for women with epilepsy as it allows them to plan pregnancy to optimize maternal and fetal pregnancy outcomes.1 Unfortunately, studies find that more than 50% of pregnancies among women with epilepsy are unplanned.2 It is important that the treating neurologist have a discussion with patients with epilepsy regarding effective methods of contraception and potential interaction between AEDs and contraception. Such a discussion can increase the likelihood of planned pregnancies and improve pregnancy outcomes for mothers and children. Multiple types of contraception are available (Table 1). Most women with epilepsy rely on combined estrogen/progesterone hormonal therapy.3 Other indications for this combination of hormones include treatment of acne, dysmenorrhea, polycystic ovary syndrome, endometriosis, and infertility. Combined estrogen/progesterone formulations have potential bidirectional interactions with certain AEDs. 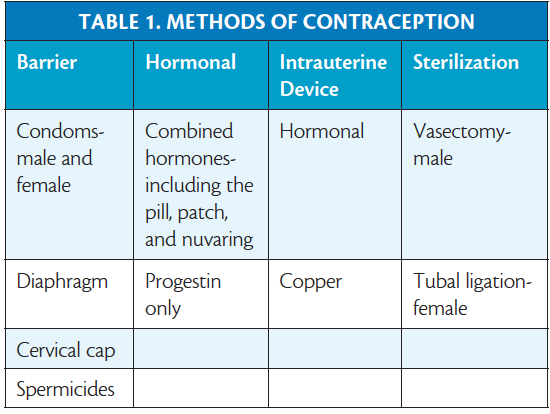 Effect of Contraception on Lamotrigine

Effect of Antiepileptic Drugs on Contraception

P450 Enzyme-Inducing Drugs. Antiepileptic drugs that induce cytochrome P450 enzymes cause enhanced metabolism of contraceptive steroids, resulting in decreased efficacy.5,7 Combined oral contraceptives have received the most study with coadministration of AEDs. There are few data on contraceptive hormone patches or rings. Carbamazepine, felbamate, oxcarbazepine, phenobarbital, phenytoin, primidone, and rufinamide all induce the cytochrome P450 enzyme system. For women prescribed AEDs that induce the P450 enzyme who use a combined hormonal method of contraception, use of a second contraceptive preparation is encouraged. This is termed dual method and might be the addition of a barrier method. Hormone preparations with a minimum of 35 mcg of ethinyl estradiol are recommended for women taking P450 enzyme-inducing AEDs; they should not rely on progesterone-only hormonal contraception, termed the minipill, because these AEDs increase the metabolism of progesterone.

Intrauterine devices (IUDs) are being used for contraception in increasing numbers in the US. Importantly, they are approved for nulliparous women and will not interfere with a woman’s potential to have children. IUDs are either copper or hormonal. Hormonal IUDs are also indicated for treatment of dysmenorrhea. Hormonal IUDs likely do not affect seizure control or AED concentrations. A study of 20 women with epilepsy who were on stable AED treatment regimens and who had the Mirena IUD placed had no significant change in seizure frequency or AED concentrations.9

The number and type of AEDs a patient takes likely does affect fertility, and using more than one AED is a significant factor that has been associated with difficulty conceiving among women with epilepsy seeking pregnancy.11 In contrast, a recent study of women in the US found no difference in rates of pregnancy between women with epilepsy and a control population of women seeking pregnancy.12 Optimizing AED regimen with as few medications as possible may increase fertility.11 Counseling a woman with epilepsy that she may have a harder time getting pregnant will prepare her as well as encourage her to seek a reproductive evaluation in a timely manner should she have difficulty conceiving.

It is important that women with epilepsy have optimal seizure control and are treated with AEDs associated with better pregnancy outcomes. Preconception folic acid supplementation will help improve these outcomes as it reduces the risk of major congenital malformations (MCMs), adverse cognitive outcomes, autism spectrum disorders (ASD), and language delays.13-17 The American Academy of Neurology (AAN) and American Epilepsy Society (AES) recommend that all women with epilepsy who are of childbearing age receive at least 400 mcg of folic acid daily.13 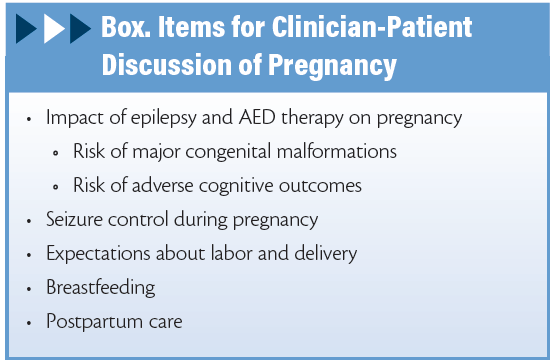 Pregnancy is a dynamic time for all women, and those with epilepsy face unique considerations and management concerns. The clinician-patient discussion about pregnancy should include the items in the Box. Having this discussion before conception better prepares a woman with epilepsy for pregnancy, birth, and motherhood. 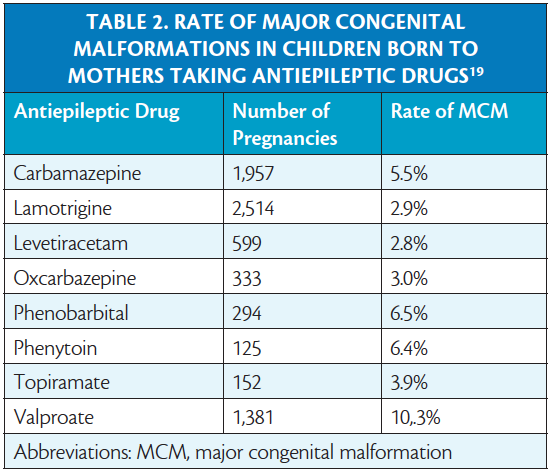 Although the majority of women with epilepsy have normal healthy babies, there is an increased risk of MCMs, which are defined as structural abnormalities with surgical, medical, or cosmetic importance. In a meta-analysis, lamotrigine (2.31% in 4,195 pregnancies) and levetiracetam (1.77% in 817 pregnancies) were associated with the lowest risk of MCMs, and valproate was associated with the highest risk (10.93% in 2,565 pregnancies).18 The background risk (ie, that of children born to women without epilepsy) was 2.51% in 2,154 pregnancies. Results from a European registry found the rate of MCMs highest for children of women taking valproate (10.3% in 1,381 pregnancies) and lowest for lamotrigine (2.9% in 2,514 pregnancies) and levetiracetam (2.8% in 599 pregnancies) (Table 2).19 Valproate and carbamazepine are both associated with an increased risk of neural tube defects. In a case control study, children with neural tube defects were 12.7 times more likely to be exposed to valproate and 2.6 times more likely to be exposed to carbamazepine.20,21 If women with epilepsy who are of reproductive age are taking these AEDs, they should probably take higher doses of folic acid. Higher AED doses are associated with increased risk of MCMs. An increase in MCM rate occurs with increasing doses at the time of conception for carbamazepine, lamotrigine, valproate, and phenobarbital.19 In addition, studies find that women on AEDs during pregnancy are at higher risk for delivering babies prematurely and giving birth to small for gestational age newborns.22

Most women with epilepsy maintain good seizure control throughout pregnancy; seizure freedom for 9 months before pregnancy is usually associated with a high rate of remaining seizure free.24 Reasons for increased seizures during pregnancy include nonadherence to treatment, pharmacokinetic changes, sleep deprivation, and medication changes.

Avoiding generalized tonic clonic or bilateral tonic clonic seizures during pregnancy is important as they are associated with increased uterine pressure , trauma from falls during seizure, fetal bradycardia, and decreased verbal IQ in association with more than 5 generalized convulsive seizures.25 Counseling women about optimizing seizure control during pregnancy emphasizes the importance of taking their AEDs; many women may not want to take medications they consider harmful to their developing babies.

To optimize seizure control during pregnancy, each woman should have a baseline AED level measured, preferably before she gets pregnant or early in her pregnancy. Levels of AEDs should then be checked at the end of each trimester. Lamotrigine levels should be checked more frequently. Because of the previously discussed accelerated glucuronidation secondary to increased estrogens in pregnancy, lamotrigine concentrations will likely decrease, which potentially puts patients taking lamotrigine at risk for increased seizures.26 A small study found that fetal sex may influence lamotrigine clearance; women who carried a female fetus had significantly lower lamotrigine concentration-to-dose ratios than women carrying a male fetus.27

Labor and delivery will likely be unaffected by epilepsy or treatment of the mother with AEDs.24 Epilepsy and AEDs are not contraindications to epidural anesthesia during delivery. Women with epilepsy are able to have a spontaneous vaginal delivery, if obstetrically indicated. Although seizures do not commonly occur during delivery,24 women with poorly controlled seizures are more likely to have seizures during delivery. Doses of AEDs should not be missed during labor and delivery. If a seizure occurs, standard treatment including benzodiazepine administration can be considered. 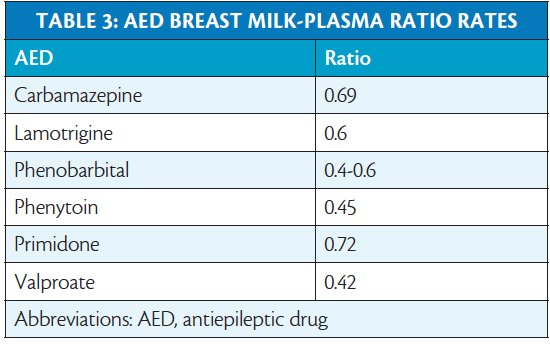 Breastfeeding is recommended for women with epilepsy taking AEDs. Concentration of AEDs in breast milk is inversely related to the percentage of protein binding for that AED. Individual breast milk plasma ratios have been recorded (Table 3). No adverse cognitive effects of breastfeeding are reported among children whose mothers have epilepsy and take AEDs.28,29 Advise women with epilepsy to also discuss breastfeeding with the obstetrician and pediatrician to ensure coordinated care and agreement among team members.

In the postpartum period, AED doses may likely need to be lowered to reflect hormonal and pharmacokinetic changes that occur after delivery. This is most important for lamotrigine. The lamotrigine dose at the end of pregnancy in most women is approximately double the prepregnancy dose and reduction to the prepregnancy dose needs to begin after delivery. If women are not advised about this reduction and provided with a detailed schedule for dose reduction, they are at risk for developing toxic effects secondary to elevated lamotrigine concentrations. Other AEDs will also likely be increased and the doses will need to be adjusted, although not as quickly as lamotrigine. It is not unreasonable to consider having the woman take a higher dose during the postpartum period as she will be sleep deprived and may be more likely to seize. Strategies to optimize sleep may involve partners, family members, or hired nurses. If the woman breastfeeds and does better with a single prolonged stretch of sleep, someone may have to do a single feed with either pumped breast milk or formula.

Women who have refractory seizures are potentially putting their newborn infants at risk. Tactics to avoid potential injury include bathing the baby with someone else present, putting the baby in stroller when walking across the room, and feeding the baby while sitting in a safe place.

Guiding women with epilepsy through contraceptive choices, prepregnancy planning, and pregnancy is important to ensure better outcomes for women with epilepsy and their children. Recognize that there may be interactions between prescribed AEDs and hormonal therapy. For many women with epilepsy, IUDs are a good contraceptive method. Prepregnancy planning includes optimizing AED therapy and seizure control as well as taking at least 400 mcg folic acid daily. Most women with epilepsy will have normal healthy pregnancies. There is however an increased risk of MCMs, notably for valproate, which is also associated with adverse cognitive outcomes among children exposed in utero. Seizure control is typically maintained throughout pregnancy. It is, however, important to follow AED concentrations with more frequent level checks needed for lamotrigine to ensure seizure control. Labor and delivery is typically not affected by the woman having epilepsy. Breastfeeding is recommended.

8. Rosenfeld WE, Doose DR, Walker SA, Nayak RK. Effect of topiramate on the pharmacokinetics of an oral contraceptive containing norethindrone and ethinyl estradiol in patients with epilepsy. Epilepsia. 1997;38(3):317-323.

23. Bromley R. The treatment of epilepsy in pregnancy: the neurodevelopmental risks associated with exposure to antiepileptic drugs. Reprod Toxicol. 2016;64:203-210.

24. Harden CL, Hopp J, Ting TY, et al. Management issues for women with epilepsy-focus on pregnancy (an evidence-based review): obstetrical complications and change in seizure frequency: report of the Quality Standards Subcommittee and Therapeutics and Technology Assessment Subcommittee of the American Academy of Neurology and the American Epilepsy Society. Epilepsia. 2009;50(5):1229-1236.

AMP receives royalties from UpToDate. The authors have no other financial or other relationships to disclose.

Genetic Testing in the Care of Patients With Epilepsy