A newly recognized category of epilepsy caused by or associated with antibodies.

Approximately 30% of patients with epilepsy do not achieve seizure freedom despite medical therapy,1 and the etiology of many epilepsies remains unknown. In 2017, the International League Against Epilepsy (ILAE) recognized an epilepsy resulting directly from an immune disorder with seizures as a core symptom. For an epilepsy to meet this classification, evidence of autoimmune-mediated central nervous system (CNS) inflammation is required. Treatment of immunologic epilepsy includes targeted immunotherapies in combination with antiepileptic drugs.2

Currently, no strict diagnostic guidelines exist for autoimmune epilepsy. This article seeks to provide a basic clinical approach to diagnosis and treatment.

It is important to clarify the difference between paraneoplastic and autoimmune epilepsy. Autoimmune epilepsy is a general term for epilepsy mediated by or associated with antibodies sometimes linked to cancer. Paraneoplastic epilepsy is a subset of autoimmune epilepsy, always associated with an underlying tumor or cancer, in which antigens shared by normal neurons and cancer cells are presented to the immune system resulting in antibody production.3 When considering a diagnosis of autoimmune epilepsy, a critical detail to keep in mind is that some antibodies target intracellar antigens, while others target neural surface antigens. Antibodies to intracellular antigens have a high association with cancer (≥ 80%) such as ANNA-1 (Anti-Hu), PCA-1 (Anti-Yo), Anti-Ma1, and Anti-Ma2 (Ta).3,4 Such antibodies are often thought of as an epiphenomenon of T-cell–mediated neural tissue destruction because the antibodies are not directly causing the underlying neurologic disease.5 These syndromes typically do not respond well to immunotherapy.

In contrast, antibodies to neural surface antigens are thought to directly cause neurologic disease, show a more robust response to immunotherapy, and have a more variable association with cancer.4-6 For example, the leucine-rich glioma inactivated 1 (LGI-1) antibody is associated with small cell lung cancer (SCLC) or thymoma in < 10% of occurrences, but antibodies to the α-amino-3-hydroxy-5-methyl-4-isoxazolepropionic acid glutamate receptor (AMPAR) are associated with thymoma or a lung or breast tumor in approximately 70% of occurrences.3 The N-methyl-D-aspartate glutamate receptor (NMDAR) antibody is unique in that the association with ovarian teratoma is age dependent; it is found most often in teenagers and young adults and less frequently in older adults.3

Patients with autoimmune epilepsy can present with anything from a simple seizure to a limbic encephalitis presentation, and there are syndrome-specific and atypical presentations as well. Limbic encephalitis is a characterized by subacute (< 3 months) rapid progression of working/short-term memory deficits, lethargy, personality changes, or psychiatric changes (eg, paranoia, depression, or hallucinations).7 Other features that can be associated are autonomic dysfunction or movement disorders,5,6 although these features do not have to be present for the diagnosis to be made.

Patients with autoimmune epilepsy typically have multifocal seizures with an unusually high (ie, daily or weekly) seizure frequency at onset and can also present in nonconvulsive status epilepticus.4-8 They often have antiepileptic drug (AED) resistance at onset5 that may be categorized as new-onset refractory status epilepticus (NORSE).10

Typically, there is no history of epilepsy or seizure risk factors in the patient’s medical or family history. There can be a personal or family history of autoimmune disease that is organ or nonorgan specific (eg, type 1 diabetes, lupus, celiac disease, rheumatoid arthritis, or autoimmune thyroid disease) or cancer (particularly those strongly associated with autoimmune disease including SCLC, thymoma, teratoma, or lymphoma).5,7

Seizures of autoimmune epilepsy are most commonly focal temporal lobe seizures but seizure onset is often seen elsewhere. Flushing or pilomotor (goosebump) autonomic seizures often occur (especially when there are antibodies to LGI1, Hu, and Ma).4,8 Facial brachial dystonic seizures (FBDS) that affect the ipsilateral face and arm are a distinct seizure type described more fully later in this article. Clinical presentations can vary as outlined in Table 1.

Typically, autoimmune epilepsy related to leucine-rich glioma-inactivated 1 (LGI-1) affects older adults around age 60. Cancer or tumor findings are uncommon and FBDS is the defining feature of the disorder. Patients may complain of unexplained falls, dropping items, and tics or twitches of the face and arm; these symptoms may precede onset of limbic encephalitis or more classic focal seizures by weeks to months. These seizures are brief (< 3 seconds) and very frequent (up to 50 times day), appearing as a brief grimace or pulling of the face and movement of the ipsilateral arm. Loss of awareness is observed only in a minority of patients and may be triggered by auditory or emotional stimuli. On EEG, 24% of patients will be observed to have frontotemporal spikes.9-11

All patients with suspected autoimmune epilepsy should have basic labs, routine EEG with or without prolonged video-EEG capturing their typical seizure types, brain MRI with and without contrast, positron emission tomography (PET), and a lumbar puncture with cerebrospinal fluid (CSF) analysis to rule out infectious etiologies. Enough CSF should be collected for antibody screening. Consider screening for other signs of autoimmunity/inflammation such as erythrocyte sedimentation rate (ESR) and C-reactive protein (CRP).

Confirmation of seizure diagnosis and localization with EEG can be helpful, although there is no pathognomonic finding to confirm autoimmune seizures. The EEG may have variable findings including normal, focal, and generalized slow activity, periodic discharges, and focal epileptiform discharges. Anti-NMDAR encephalitis can have a finding described as extreme delta brush (1-3 Hz delta activity with superimposed 20 to 30 Hz beta activity), which has been reported in about 33% of cases after patients have entered later stages or the comatose phase of the disease. Findings on EEG that suggest seizures are of autoimmune etiology include multifocal seizures, nonconvulsive seizures, or focal motor status epilepticus.3-6,9

Brain MRI findings, with and without contrast, are often normal, especially early in the disease but may show T2 fluid-attenuated inversion (FLAIR) signal and volume changes in the mesial temporal lobes or cortical and subcortical areas. Rarely contrast enhancement or restricted diffusion is seen.3-6,9 A brain PET scan can reveal hypo- or hypermetabolism of affected brain regions. In a study of 8 patients with FBDS from LGI-1 encephalitis, 5 patients had basal ganglia findings and 6 patients had findings in the temporal regions.11 Some studies have suggested that although PET is not very specific, it can be more sensitive at detecting a focal abnormality associated with autoimmune epilepsy than EEG or MRI.13

Although positive antibody screening is helpful to confirm a diagnosis, it is thought that up to half of patients with autoimmune epilepsy will have negative antibody findings.8,13,14 It is recommended to use antibody panels rather individual antibody assays and to test both serum and CSF.16 It is important to check which antibodies will be assessed on the panel chosen. Some labs will perform immunofluorescence (IFA) surveys and enzyme-linked immunosorbent assay (ELISA) but not the gold-standard confirmatory cell-based assay (CBA).13 Antibody panels may have confusing titles such as an autoimmune neurology panel, autoimmune epilepsy panel, paraneoplastic panel, or some other variation. A clinician should be certain that the panel chosen includes antibodies for the suspected etiology (Table 1) and screen for antibodies associated with conditions that present similarly (ie, GQ1B, ANA, and TPO/thyroglobulin antibodies).7 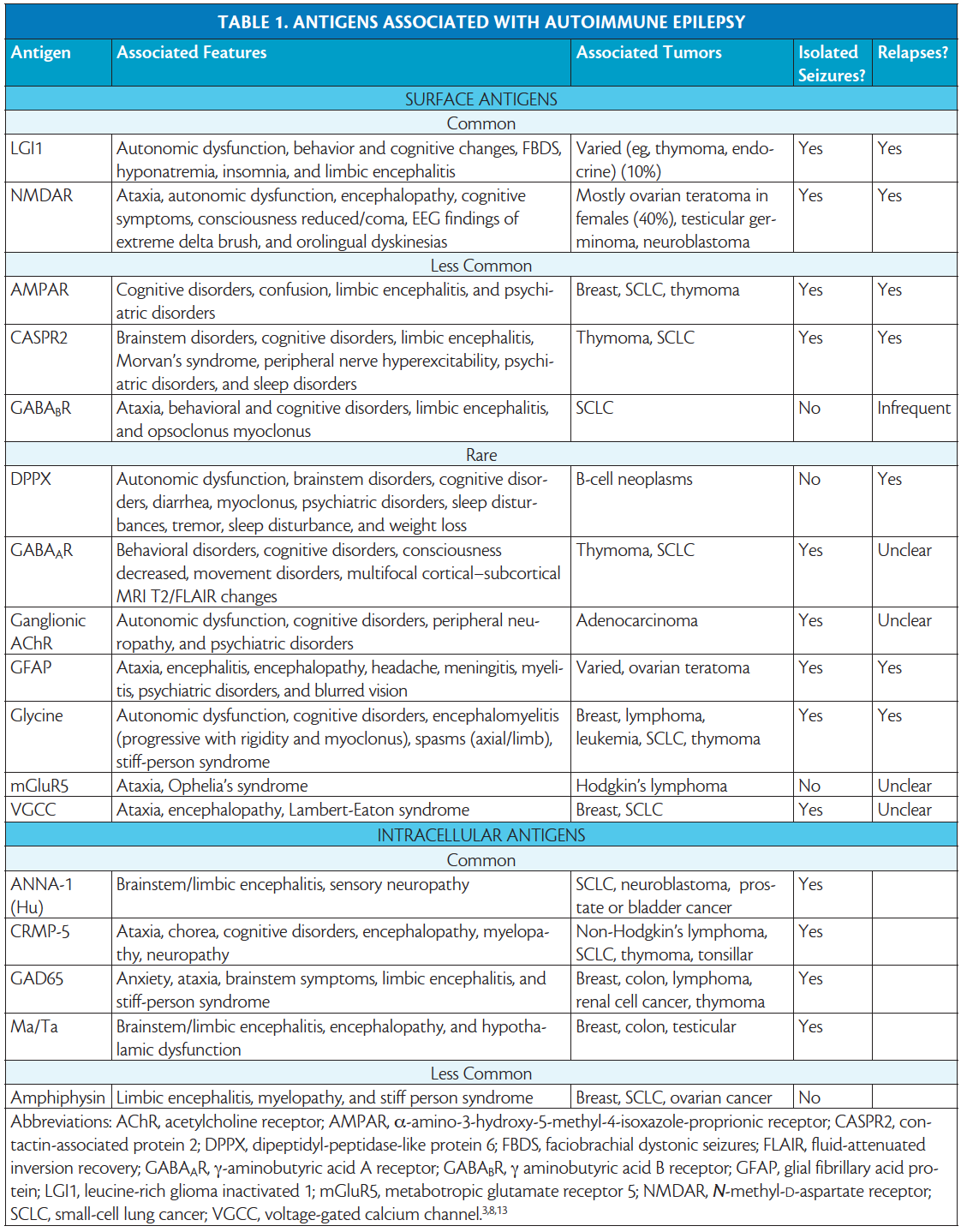 Results from antibody panels typically take 2 weeks or more. Treatment should not be delayed while waiting for results because early treatment results in better outcomes.3 If results are indeterminate, consider sending serum and CSF to a research lab investigating rare or novel antibodies to neural antigens. Recently a scoring system called the antibody prevalence in epilepsy of unknown etiology score (APE) has been proposed to give a probability of autoimmune epilepsy and help guide the diagnostic workup (Table 2). An APE score ≥4 predicts a high likelihood of an autoimmune etiology.17

If there is a positive antibody result, cancer screening for the most common associated cancer type should be done (Table 1). If antibody testing is negative, ovarian or testicular ultrasound and thoracic, abdominal/pelvic CT and full body PET scans are reasonable follow up tests. Repeat imaging every 6 to 12 months for up to 4 years should be considered if an antibody is present that has a high association with a tumor or if the patient is clinically considered as being at high risk for malignancy.5,14 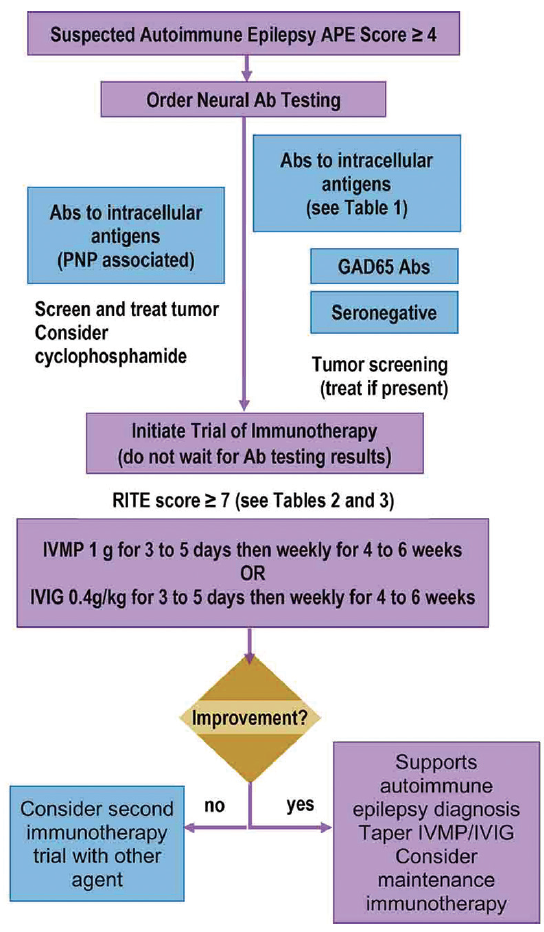 Currently, no data from randomized controlled trials is available. Observational studies and clinical experience suggest that a response to immunotherapy in epilepsy (RITE) score ≥7 predicts a favorable response to immunotherapy (Figure).17 First-line treatment consists of either intravenous methylprednisolone (IVMP) (1 g/day for 3 to 5 days) or intravenous immunoglobulin (IVIg) (0.4g/kg/day for 3-5 days). If there is no response to the first agent, it is reasonable to try the second. Plasmapheresis (PLEX) is often reserved for those who have a contraindication to IVMP or IVIg, have failed those treatments, and have status epilepticus or severe symptoms.4,9 A central venous catheter is required for PLEX and can be difficult in uncooperative patients, children, and those with autonomic instability.10 Weekly IVMP or IVIg may be continued for 4 to 6 weeks (sometimes up to 12 weeks) then followed by increased treatment intervals over 4 to 6 months. Other protocols suggest using a steroid taper or monthly infusions.8,9 Seizures may respond (50% reduction or seizure freedom) within 4 weeks but cognitive or psychiatric symptoms typically recover more slowly. Early treatment has been shown to predict better oucomes.3-5,17

If patients worsen or there is no response within 2 weeks of a first-line therapy, second-line therapies are rituximab (1g IV) given twice 2 weeks apart or cyclophosphamide (750mg/m2 monthly up to 6 months).

If there is a favorable response to treatment, chronic immunosuppression with mycophenolate mofetil, azathioprine, rituximab or cyclophosphamide should be considered. Mycophenolate mofetil and azathioprine are often paired with first-line treatment until they are effective as monotherapy. Rituxmab is preferred by some groups for treatment of patients with antibodies to neural cell surface targets, whereas cyclophosphamide is often used when there are intracellularly targeted antibodies. Appropriate treatment of an underlying cancer or tumor is also essential to recovery. Consider withdrawal of immunotherapy after 2 years. Seizure medications should be used in conjunction with immunotherapy.3,5,6,9 Recovery can often be gradual and protracted. Many patients are hospitalized for 3 to 4 months followed by months of rehabilitation. Relapses of the disease are also possible.16

Autoimmune neurology is a fascinating and evolving field, and this article serves as a guide to the evaluation and treatment of this challenging disease. The clinical presentation may be complex and testing may need to be repeated when findings are initially negative or if specific antibodies are not found. The diagnosis is not based on a single result but the comprehensive clinical picture. Each antibody has its unique clinical findings, cancer association, and response to treatment. Early diagnosis and treatment can drastically alter the course of the disease. Advances in the detection and identification of causative antibodies and other biomarkers will aid in diagnosis and prompt treatment of these patients in the future.

6. Quek AM, O’Toole O. Autoimmune epilepsy: the evolving science of neural autoimmunity and its impact on epilepsy management. Semin Neurol. 2018;38:290-302.

The author has no financial or other relationships to disclose

Genetic Testing in the Care of Patients With Epilepsy