Challenge Case Report: A Woman With a Large Dural-Based Lesion

An Hispanic woman, age 52, presented with persistent dizziness and the inability to “bring out certain words.” She had been having difficulty speaking for a number of months. Recently, she began to notice some clumsiness in her right hand and occasional weakness in her right leg. Her neurologic examination showed severe expressive aphasia and mild right hemiparesis. Brain MRI showed a dural-based left frontotemporal convexity lesion measuring 5.7 cm x 3.2 cm x 5.1 cm, diving into the left Sylvian fissure (Figure 1). 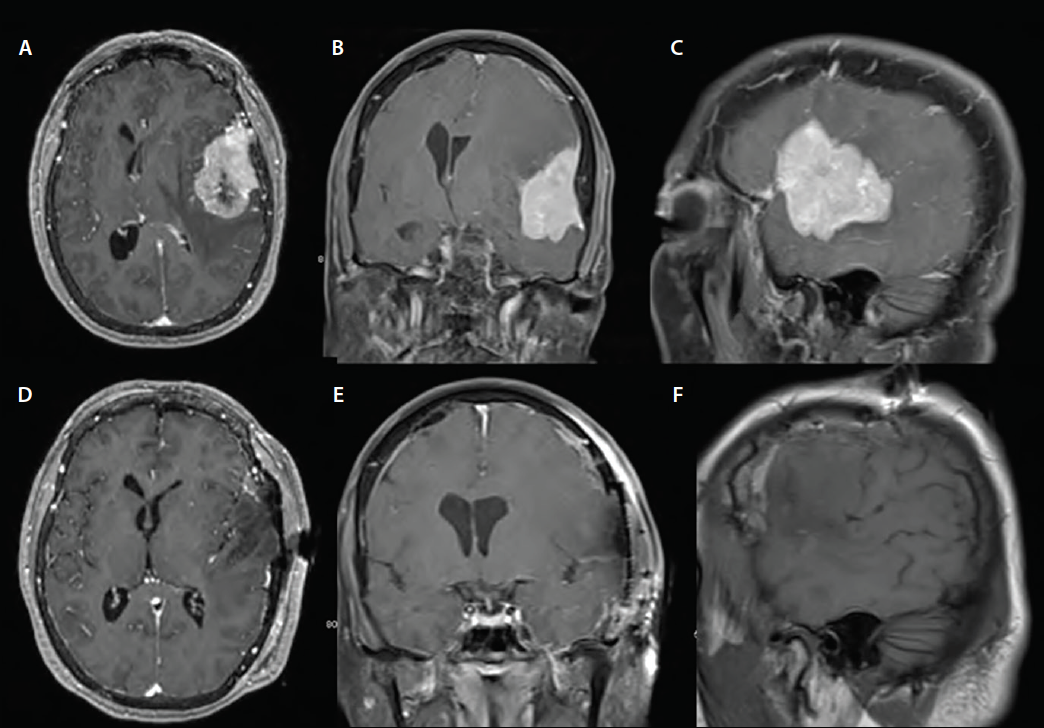 Figure 1. Representative images from preoperative and postoperative brain MRI. The top row shows a large dural based lesion, in axial (A), coronal (B), and sagittal (C) orientation that seems to be splitting the fissure between the frontal and temporal lobes. The bottom row (D-F) is the post-operative MRI that confirms gross total resection of this lesion, with preservation of adjacent brain.

Our patient underwent uneventful gross total resection of the lesion, which, during surgery, was confirmed to arise from the dura and invade overlaying bone, the latter of which was removed with margins. Lesion pathology was consistent with World Health Organization (WHO) grade II atypical meningioma (Figure 2). The patient’s weakness resolved and her aphasia improved. She has been referred for a clinical trial for higher-grade meningiomas and was randomized to observation. She will continue to be followed clinically and radiographically. 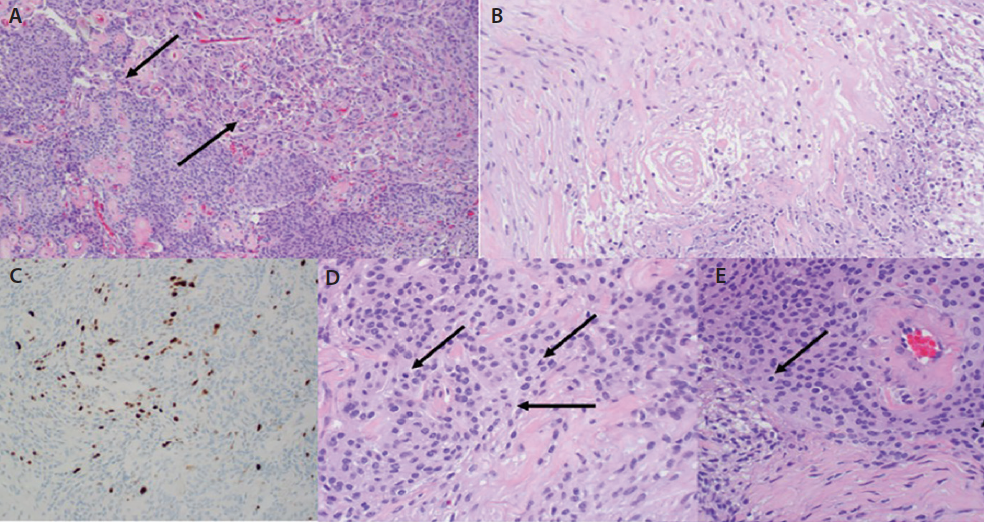 Figure 2. Pertinent histopathological images of this atypical meningioma. H&E at 10x, although much of the tumor had a classic meningothelial appearance (A upper right, arrow); there were many more patternless-appearing foci (A, lower left). H&E at 20x, occasional foci of necrosis were associated with hyalinization. Ki-67 at 20x, a proliferation index appears to exceed 4% (C). H&E at 40x, although it was uncommon to find more than 2 mitotic figures in 1 high-power field, a mitotic index exceeded 5/10 hpf focally (D). H&E at 40x, 2 mitotic figures in 1 hpf (E).

1. The incidence of meningioma:

a. Increases with age and is more predominant in women

b. Increases in age and is higher in men compared to women

c. Is unaffected by a prior history of cranial radiation

d. Is lower in African Americans compared to Caucasians

a. A gross total resection with dura and bone

b. A gross total resection

3. The following defines the meningioma as at least grade 2:

4. The following systemic therapy is approved by the FDA for the treatment of meningioma:

d. None of the above

A Woman With a Large Dural-Based Lesion 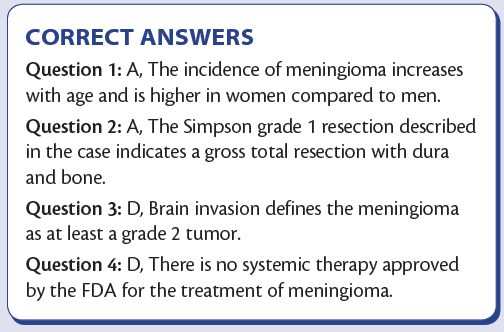 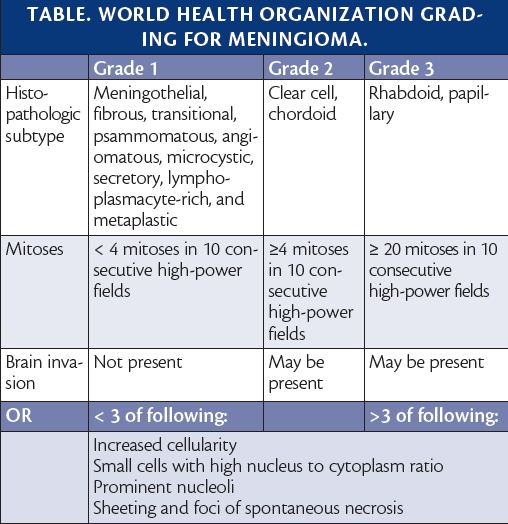 Meningioma incidence increases substantially with age and is the most common primary CNS tumor in patients > age 35. Menigioma is very uncommon in children (0.14/100,000 in those age 0-19 years) compared to the elderly (37.75/100,000 in those age 75-84). There is a somewhat higher incidence in African Americans compared with Caucasians.1 Cranial radiation is a risk factor for meningioma development. Recently, a specific genetic abnormality, an NF2 gene rearrangement, was found in almost half of patients with radiation-induced meningiomas.2

Meningothelial whorls are a common histologic feature of meningiomas across all grades. Calcifications are quite common in meningiomas and usually reflect slower or no growth and grade 1 nature; as such, calcifications might be a favorable finding. Although bone invasion does not alter grading of meningiomas, in the most recent update to the WHO Central Nervous System Tumor Classification, brain invasion qualifies a meningioma as at least a grade 2 (Table).5

Surgery and radiation have long been the mainstays of meningioma treatment. The role of postoperative radiation for completely resected grade II meningiomas is being explored in the NRG BN003 phase 3 clinical trial.a

Although numerous systemic therapies have been investigated for the meningioma treatment, none has demonstrated a substantial benefit yet.6,7 More recently, specific genetic mutations have been reported in subsets of meningiomas.2,8 In particular, mutations of genes coding for smoothened (SMO), a G-protein coupled receptor; the Akt protein kinase; and tumor suppressor NF2, have garnered particular interest as they appear to describe mutually exclusive molecularly defined subsets of meningioma that correlate with neuroanatomic localization. Some of these and other targets are being actively investigated as potential therapeutic targets in clinical trials of systemic therapies for meningiomas.b,c Future systemic therapies may be incorporated into treatment algorithms for some subtypes of meningiomas.

4. Oya S, Kawai K, Nakatomi H, Saito M. Significance of Simpson grading system in modern meningioma surgery: integration of the grade with MIB-1 labeling index as a key to predict the recurrence of WHO grade I meningiomas. J Neurosurg. 2012;117(1):121-128.