Obesity that drives metabolic syndrome may drive a higher risk of dementia. 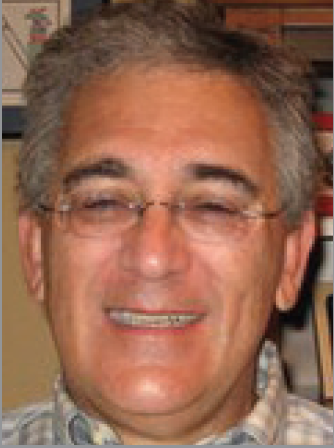 Estimates suggest that more than 2 billion individuals are overweight or obese. Central obesity is increased fat in the abdomen and internal organs that causes low-grade inflammation, a driver and component of metabolic syndrome that includes symptomatic dyslipidemia, decreased insulin sensitivity, hyperinsulinemia, hyperglycemia, and hypertension. Central obesity and metabolic syndrome cause dysfunction of the liver, pancreas, brain, kidney, and vasculature. 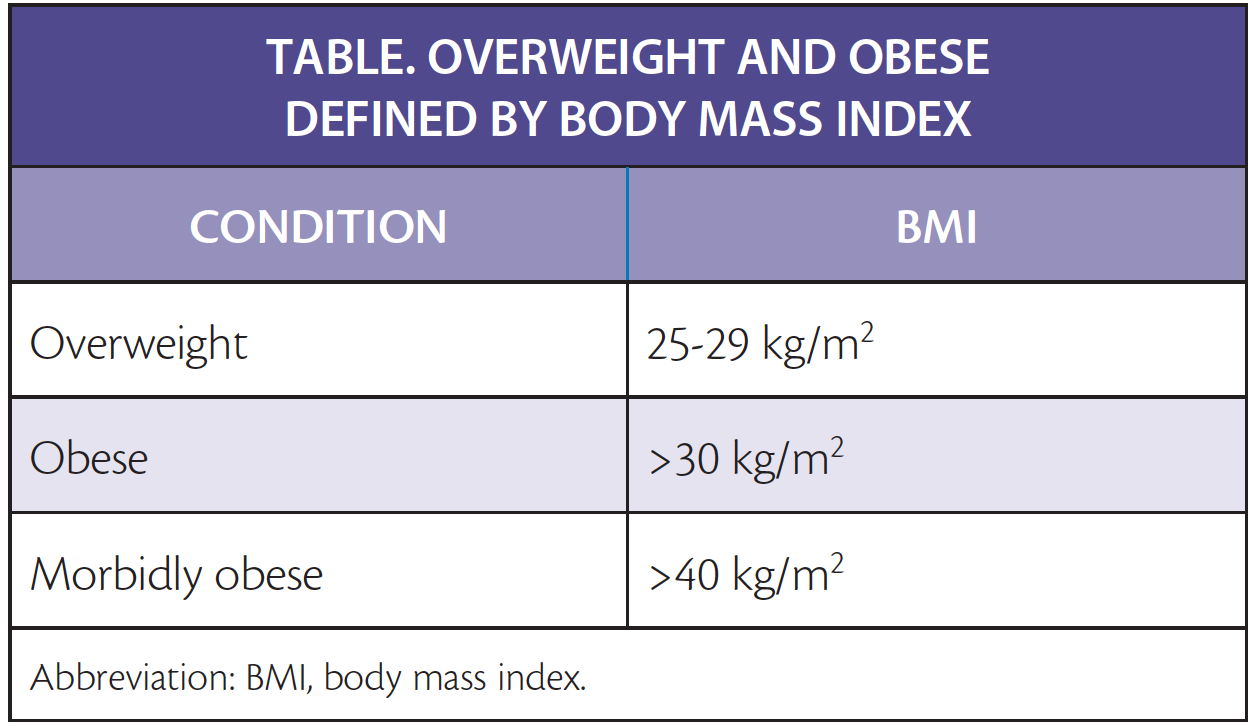 Body mass index (BMI) has been used to determine if a patient is overweight or obese (Table). BMI is the weight of an individual in kilograms divided by the square of his or her height in meters. BMI measurements do not reflect fat distribution, however, and this may lead to an inaccurate assessment of disease risk. For example, people with lower fat deposits in the abdomen may have fat deposits in the gluteal, femoral, intramuscular, and subcutaneous regions that are not ominous, and their adipocytes have greater capacity to deal with an increased metabolic load.1 In these cases, the measurement of waist-to-hip ratio (WHR) is a better marker of disease risk than BMI. 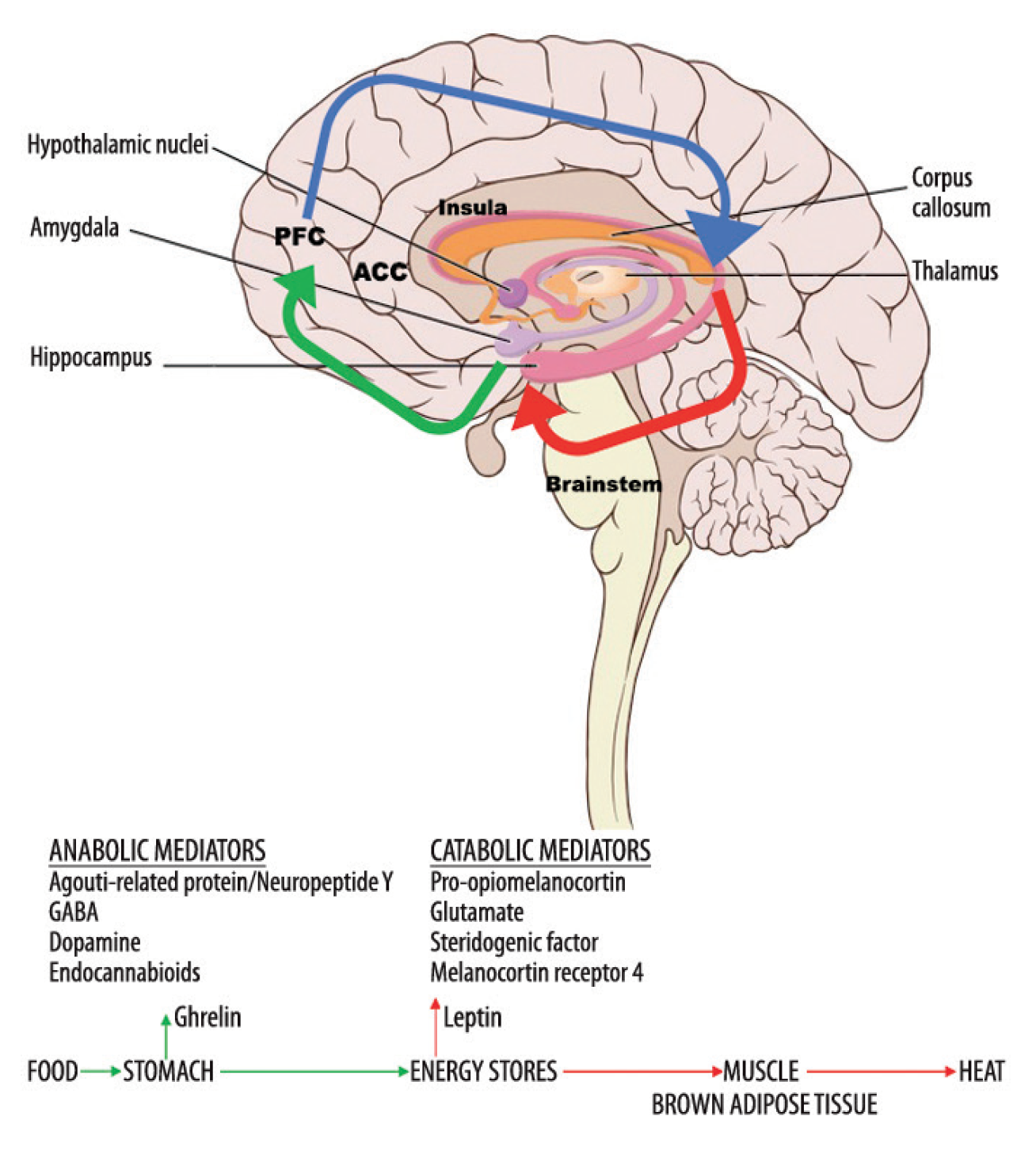 Figure. Regulation of energy balance and homeostasis depends on both energy intake and expenditure. Reward circuits (green) activate executive cortical function, which in turn activates the autonomic pathways in the brainstem stimulating physical activity. This neural activity is modulated by signals from the periphery, ghrelin, released by the stomach, and leptin, released from energy stores. Abbreviations: PFC, prefrontal cortex; ACC, anterior cingulate corex.

• Voluntary activities of eating and exercise are controlled by the PFC and the ACC.

• The insula and amygdala are particularly sensitive to award-inducing cues and feed signals forward to the PFC and ACC, which, in turn, modulate the overall value of food.3

• The insula receives input from the oral cavity, taste neurons, and gut-related signals.

• The ventral striatum (nucleus accumbens) is involved in components of reward-motivated behavior.4

• The opioid and cannabinoid system is anabolic and stimulates dopaminergic neurons that project to the striatum, promoting energy deposition by increasing food intake.5

• The arcuate nucleus (ARC), located in the basal hypothalamus, sends input to the ventral, medial, lateral, dorsal, and preoptic hypothalamus, which then sends information to the rostral forebrain appetite network (PFC, ACC).6

Brown adipose tissue. Chemical energy release by BAT as heat is increased by high vascularity of the tissue and signaling from the sympathetic nervous system.7

Leptin. Fat cells release leptin, a catabolic mediator, in proportion to fat mass. Leptin crosses the blood-brain barrier (BBB) at the median eminence of the hypothalamus where it acts as a trophic signal in the ARC, enhancing axon outgrowth to the periventricular hypothalamus thereby increasing activity of the melanocortin system to promote physical activity. Leptin also decreased food intake by increasing neuronal density and activity of the appetite network in the prefrontal cortex linked to satiety. Leptin and leptin receptor deficiency lead to obesity,8 and leptin replacement can decrease fat deposition by reducing food intake and stimulating energy expenditure. Overexposure to endogenous (from fat cells) or exogenous (as a potential therapeutic agent) leptin, however, does not treat obesity because the leptin receptor develops tolerance over time.9

Adipose tissue. Components of adipose tissue include adipocytes and a vascular compartment made up of preadipocytes, fibroblasts, immune cells, endothelial cells, blood vessels, and nerve endings. Adipocytes are fat-storing cells that store energy as triglyceride-rich droplets. Lipogenesis (ie, adipocyte triglyceride uptake and storage) is upregulated by insulin. Lipolysis is the use of fat for energy and is inhibited by insulin. When the energy balance is negative, sympathetic nerve signals upregulate lipolysis of stored triglyceride to fatty acids that enter the circulation to serve as fuel for nonadipose tissue.11

Development of Obesity and Effects on the Metabolic System

During caloric excess and positive energy balance, adipocytes in visceral and abdominal fat tissue undergo hyperplasia, resulting in tissue expansion to accommodate storage of surplus calories. The increased mass of adipose tissue causes a low metabolic inflammation that impairs adipokine secretion and insulin signaling; compromises triglyceride storage; and increases basal lipolysis, C-reactive protein, interleukins, tumor necrosis factor, and leptin. The inflammatory response activates macrophages, triggering release of monocytes, B lymphocytes, and mast cells into the circulation, which results in increased insulin resistance in adipose tissue. In turn, free fatty acids (FFAs), which are not cleared in individuals with obesity, are increased.12 Liver-derived low-density lipids are then hydrolyzed to long-chain FFAs by lipoprotein lipase in vascular endothelium, neurons, and glia. The increased FFA load occurs in all organs and throughout the nervous system, impairing metabolism. It is important to note that these mechanisms do not occur in isolation, but rather in the context of additional metabolic problems such as hypertension, diabetes, and high cholesterol levels, which all can lead to strokes, heart disease, and cognitive impairment.

Evidence that obesity adversely affects the central nervous system (CNS) and especially cognitive function, including attention, executive function, decision making, and verbal learning has been accumulating. There are meta-analyses showing strong associations between obesity, Alzheimer’s disease (AD), and other dementias.13,14 Obesity doubles the risk of AD,13 and obesity in midlife predicts greater risk of dementia in later life.15 Postmortem studies of 12 cases showed that elderly people with morbid obesity had increased concentration of hippocampal markers associated with AD (β-amyloid and tau proteins) and decreased hippocampal volume.16 BMI alone is a predictor for temporal lobe atrophy,17 and there is evidence that obesity increases the risk of mild cognitive impairment (MCI) independent of age.18,19 Using diffusion tensor imaging to measure gray and white matter volume of elderly subjects with normal cognition showed that those with increased BMI, hyperinsulinemia, and type 2 diabetes had more atrophy in the frontal, temporal and subcortical brain regions, areas that are known to be involved in learning and memory.20 There are studies that do not show the same association, however, including a large retrospective study in which 2 million individuals were followed for 20 years that showed no correlation between BMI and dementia.21 A possible flaw in the design of that study was that the diagnosis of dementia was made without regular cognitive testing.

In other animal models, hypothalamic inflammation impaired hypothalamic integration of neuroendocrine and autonomic signals of satiety and nutritional status, metabolic regulation of food intake and energy expenditure, and damaged the BBB at the median eminence suggesting vulnerability to circulating FFAs.25 Leptin-induced satiety is reduced in obese animals, and increased hypothalamic inflammatory signaling leads to leptin resistance, decreasing appetite control and activity. Mice with metabolic syndrome induced by a high-fat diet have endoplasmic reticulum resistance in the hippocampus. When this is mimicked by thapsigargin treatment of human hippocampal neurons, calcium homeostasis and insulin signaling are impaired.26 Endoplasmic reticulum resistance leads to decreased protein synthesis and increases folded proteins, which could be a physiologic link between metabolic syndrome and cognitive impairments.

Meta-analysis of 21 studies comparing obesity in midlife with dementia in later life showed that obesity in midlife increased the risk of dementia by 1.5 to 2 times up to age 65, but not in subjects older than age 65, when a reverse association was seen.14 This result suggests that maintaining weight in later life is a sign of health, whereas unplanned weight loss is a sign of concern.

In a longitudinal study of subjects with obesity over a 30-year period, midlife obesity was related to lower cognitive function in older age and the negative effect of overweight had an onset in early old age.18 Another study of twins, who were underweight (<20 BMI), overweight (25 to <30 BMI), and obese (>30 BMI), measured verbal, spatial, memory, and perceptual speed and found that being overweight or obese was associated with lower performance in all cognitive domains except memory.

Bariatric surgical procedures profoundly improve metabolic homeostasis, and patients who have undergone these procedures show improved cognitive function that may be due to resulting changes in adipokine, insulin, and inflammatory signaling.30,31 One study showed decreased inflammation and reduced levels of β-amyloid-precursor protein in peripheral blood following bariatric surgery, leading the investigators to speculate that a similar benefit could have occurred in the hippocampus.32 These studies support the pathogenic role of obesity in the nervous system. Bariatric surgical procedures are not necessarily the recommended treatment for obesity, however, because of the potential for surgical complications.

There is not much controversy that obesity has neurologic consequences. The physiology of the normal human energy system, and how it becomes impaired in obesity and can lead to cognitive impairments, is complicated and multifactorial. Metabolic syndrome, which can include hypertension, diabetes, and high cholesterol, plays a role, but is not the only mechanism, in the pathophysiology of obesity. Evidence also shows that obesity leads to excess storage of fat in visceral tissue, which results in inflammatory changes and release of FFA that are toxic to the nervous system. Evidence suggests that gastrointestinal surgery can improve obesity and its general and neurologic complications, but this can also be achieved by diet, exercise, and counseling, with fewer complications.

14. Pedditizi E, Peters R, Beckett N. The risk of overweight/obesity in mid-life and late life for the development of dementia: a systemic review and meta-analysis of longitudinal studies. Age Ageing. 2016;45:14-21.