When accompanying a patient for evaluation of recent minor head trauma, family members often express concerns about the risk of permanent sequelae. Physicians need to understand diagnostic criteria, clinical manifestations, treatment, and prognosis of mild traumatic brain injury (mTBI), also known as concussion, including the relationship among concussions, postconcussion syndrome, and TBI-related neurocognitive disorder. This review presents data from well-designed, controlled studies to assist the treating physician in meeting the needs of these patients.

Here in part I, the definitions and classifications of mTBI are reviewed, and data on prognosis for a patient with a single isolated concussion are presented. Diagnosis and treatment n will be covered in part II, in the next issue of Practical Neurology in May, 2018.

According to the National Institute of Neurological Diseases and Stroke, “Traumatic brain injury, a form of acquired brain injury, occurs when a sudden trauma causes damage to the brain.”1 A closed head injury is a type of TBI in which the skull and dura mater remain intact.

Classification systems are important for comparing study results and conclusions. These systems, as well as other screening tools, have been used for diagnostic purposes, although none have been validated as diagnostic to date. As screening tools, these and other questionnaires help predict the likelihood of mTBI. Screening tools may guide bystanders in when to seek clinical care and may also assist the clinician in diagnosis, which will be addressed in part II of this article. Here, classifications are discussed to aid in understanding the published literature regarding prognosis of a single isolated concussion.

There are 2 systems for classifying TBI: the Glasgow Coma Scale (GCS)2 score and the Mayo Clinic classification3 (Tables 1 and 2). 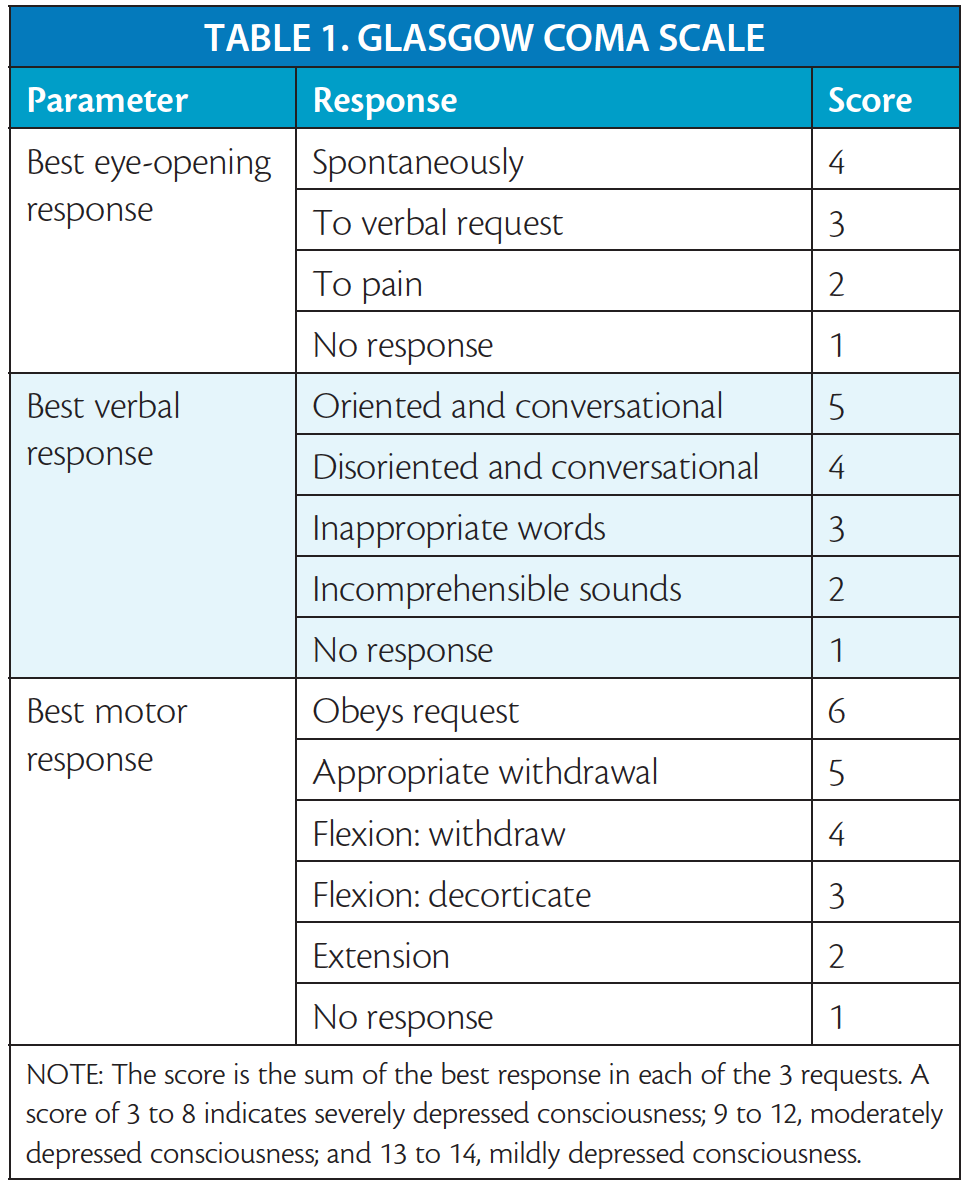 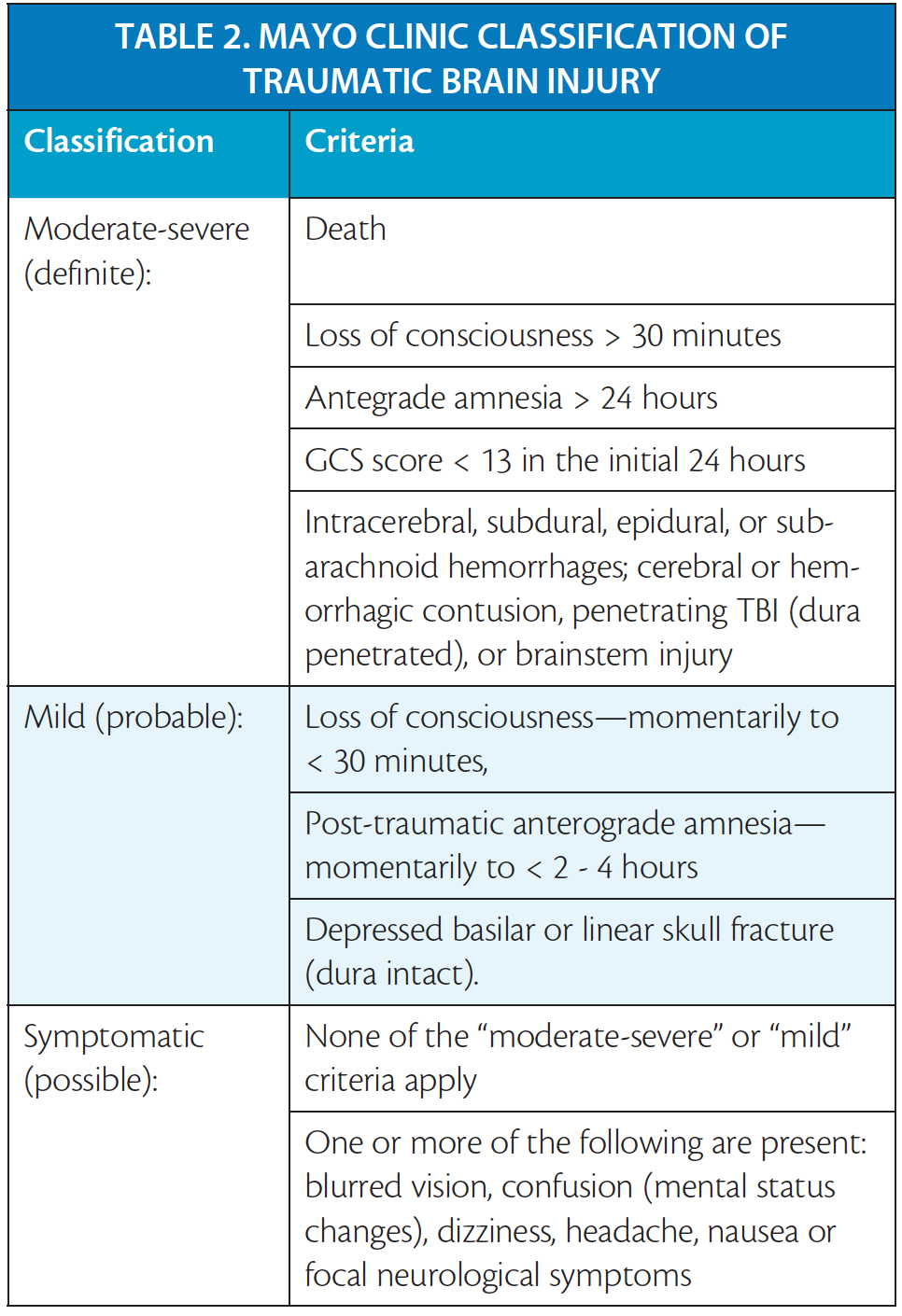 The GCS was designed for “assessing the depth and duration of impaired consciousness and coma” so emergency services personnel could quickly inform emergency physicians of the seriousness of a patient’s presentation by describing his or her level of consciousness. The GCS was never intended or validated as a diagnostic tool. It is based on the sum of an individual’s best motor, verbal, and eye-opening responses. The Mayo Clinic classification categorizes TBI as moderate to severe (definite), mild (probable), or symptomatic (possible) based on acute injury characteristics, including changes in consciousness, amnesia, the GCS, subjective complaints, and imaging studies. It is important to note that mTBI defined by the GCS is not mTBI according to the Mayo Clinic classification. Specifically, an mTBI, defined by the GCS score methodology, refers to an individual with a GCS score of 13 to 15 within 30 minutes of the event (regardless of whether the patient was transiently unconscious or amnestic). According to the Mayo Clinic classification, mTBI refers to an individual who demonstrated a loss of consciousness (LOC) lasting less than minutes and/or amnesia lasting less than 2 to 4 hours (regardless of GCS score).

The Role of Imaging in Classification of Traumatic Brain Injury

Multiple studies4-6 have documented abnormal findings on imaging from patients diagnosed with mTBI. CT findings may be present in 3% to 21% of patients with a clinically diagnosed mTBI and MRI findings may be present in 10% to 57%. A reasonable criticism of the GCS classification is that it does not include any imaging findings or other evidence of intracranial injury. For example, a patient with subarachnoid, subdural, or intraventricular bleeding, which is clearly a severe injury, would be classified as having an mTBI on the GCS scale if they did not lose consciousness, exhibit amnesia, or have a GCS of 13 to 15 within 30 minutes of the injury. This is significant because the recovery profile and prognosis for a patient with a contusion or intracranial bleed differs significantly from that of a patient with a GCS score of 13 to 15 and no findings from imaging studies.

Regardless of the specific definition used, the consensus diagnostic criteria of a concussion include the following:

Amnesia following a concussion may be anterograde or retrograde. Typically, the amnesia shrinks over time, eventually lasting no more than a few seconds. The length of anterograde amnesia is thought to be an accurate guide to the severity of the head trauma.

As per the consensus criteria, LOC is not required for diagnosis of concussion and may be present in as little as 8.9% of patients with concussion.21 However, diagnosis of a concussion does require at least an alteration in consciousness, making it important to understand the term. The origin of the modern concept of consciousness is often attributed to John Locke’s Essay Concerning Human Understanding,22 published in 1690. In 1890, Dr. William James23 described consciousness as “the state of awareness of self and environment.” Dr. James noted that to be aware, one must be awake. An individual may be awake but not aware (ie, persistent vegetative state) but cannot be aware without being awake. Hence, consciousness requires wakefulness and awareness. The President’s Commission for the Study of Ethical Problems in Medicine and Biomedical and Behavioral Research defines unconsciousness as “the inability to experience the environment.”24

Wakefulness. Descriptions of altered wakefulness reflect a spectrum ranging from fully awake to comatose (Table 3) and are not as useful as the GCS score to document a patient’s depth of altered consciousness.25 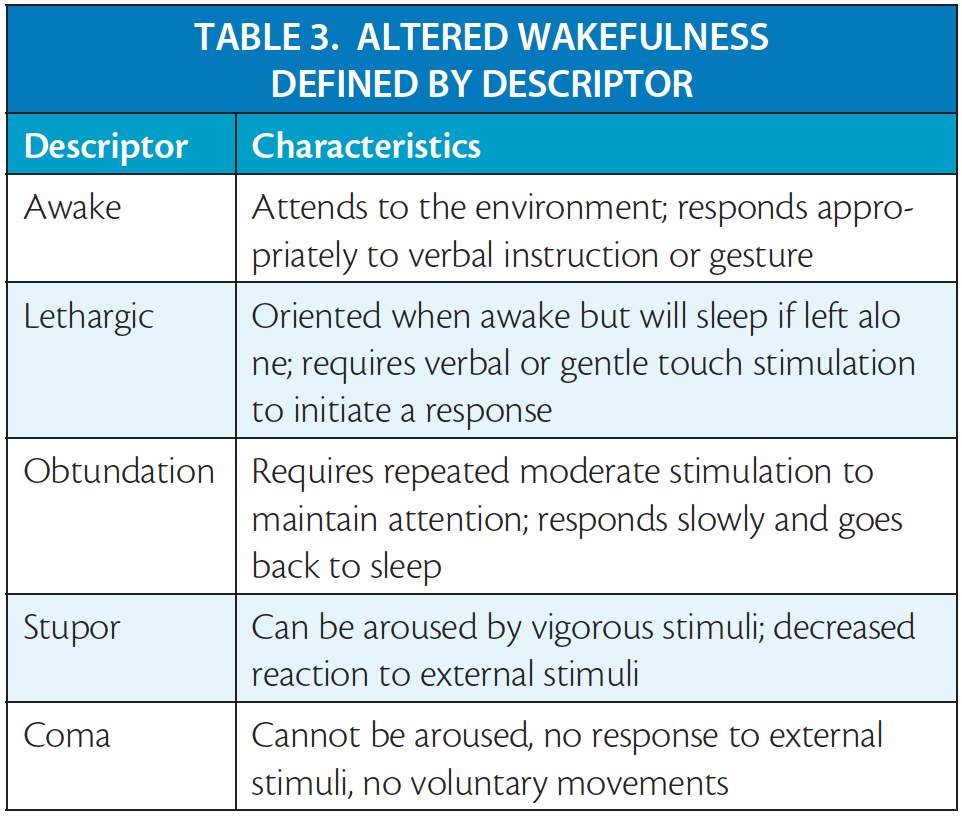 Awareness. An individual’s cognizance of self and environment is the most widely accepted definition of awareness and can be clinically evaluated via the Mini-Mental Status Examination, which assesses orientation, attention span, memory, and language.26 Awareness of environment is assessed via the external senses (ie, the ability to see, hear, smell, taste, and touch). The state of altered awareness is referred to as confusion. Awareness requires a functional and intact cerebrum.

After a traumatic event, patients may report they were dazed or stunned; this typically represents the time it took for the patient to realize what was happening versus confusion related to altered awareness. “Seeing stars” or stating that “everything went black” indicates an alteration in blood pressure or heart rate. In both cases, the patient must have been aware to have these perceptions; thus, neither are indicators of confusion or altered awareness.

The subjective complaints following a concussion are typically classified into 3 categories: somatic, cognitive, and behavioral. In a meta-analysis of 600 patients with concussion, McCrea reported the most common immediate complaints were headache (80%-90%); dizziness (70%-80%); slowed mentation, mental fog, or poor concentration (60%-70%); memory problems, fatigue, and sensitivity to light and noise (50%-60%). The same meta-analysis showed that the most common symptoms remained the same at 3 and 7 days, but only 10% to 40% of patients had symptoms at 3 days; at 7 days fewer than 20% of patients had any symptoms.27 These symptoms are also present in numerous concussion study control groups and in patients with neurologic and psychiatric conditions (Table 4),28-41 making it easy to understand why the AAN concluded, “the diagnosis of a concussion should not be made based on the presence or absence of somatic, behavioral, or cognitive complaints at some arbitrary point in time.”13 Another consensus statement notes, “. . .these symptoms and signs also happen to be nonspecific to concussion, so their presence simply prompts the inclusion of concussion in a differential diagnosis for further evaluation, but the symptoms are not diagnostic of concussion.”19 The presence of symptoms no more establishes the diagnosis of concussion than the absence of symptoms excludes the diagnosis.

Several large prospective controlled studies have analyzed the natural history and recovery profile of a single isolated concussion using standardized concussion symptom checklists, baseline measurement, and follow-up neuropsychological tests.42-59 The recovery profile of patients with a single concussion has been compared to matched controls (Table 5). Subjects were primarily high school and college students, professional athletes, and members of the armed forces. Together, these studies show that recovery from a single isolated concussion begins as early as 48 hours after injury, and full recovery occurs for most patients within 1 to 5 weeks. None of these studies showed significant differences between patients with concussion and normal controls 12 weeks after the concussive injuries occurred. In 1 study, there were no significant differences between patients with concussion and the control group as long as 1 year after injury. 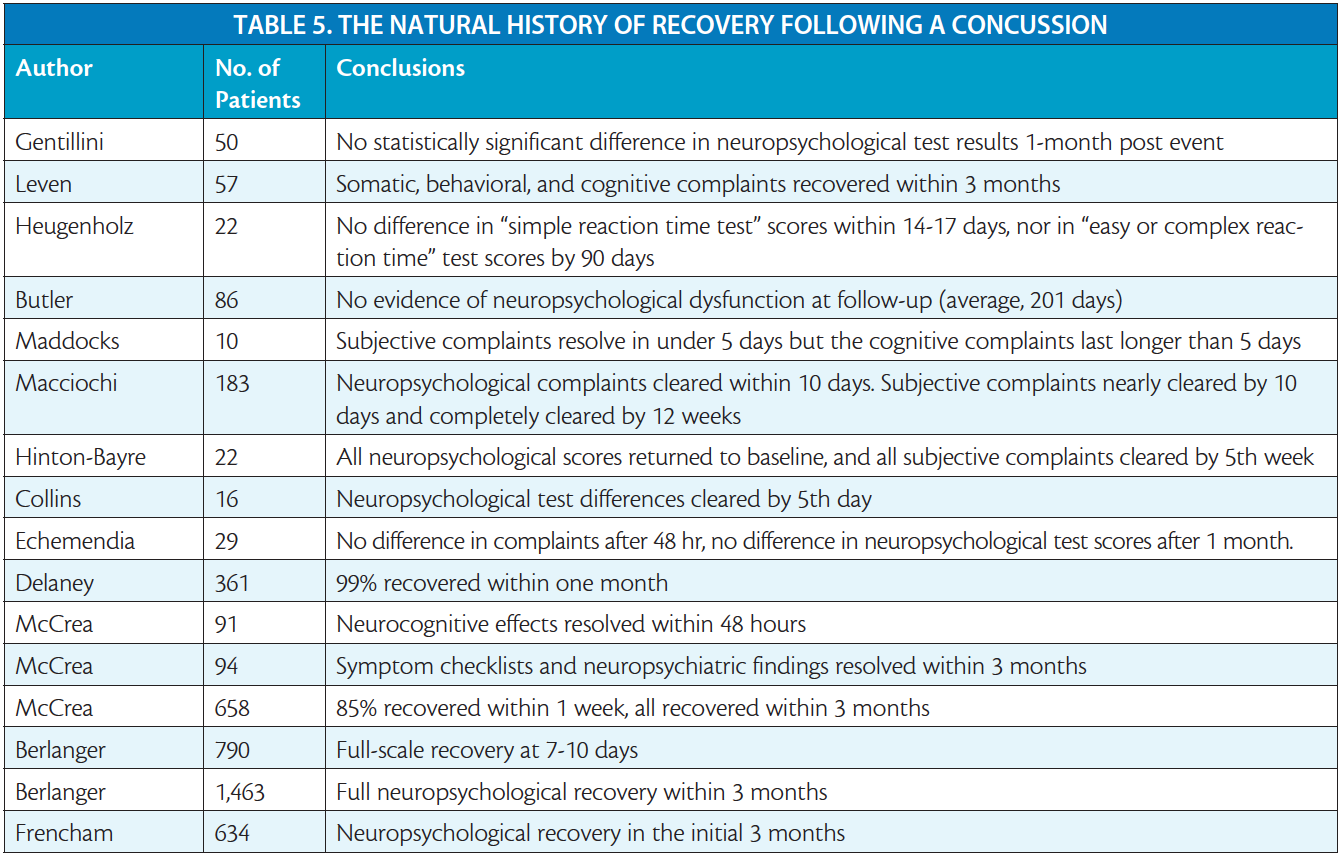 In the most detailed and largest concussion study to date, McCrea45 completed a meta-analysis of 3 large, multicenter, controlled, prospective studies that together included 16,624 individuals, 658 of whom had a concussion as defined by the AAN. Each patient with concussion was thoroughly evaluated with a symptom checklist, a balance test, the standardized assessment of concussion survey, and a neuropsychological test battery (Table 6). More than 85% of patients with concussion had a complete recovery in 7 days, and more than 97% recovered within 30 days. At 90 days, there were no statistical differences between the scores of those with concussion and the control group. The meta-analysis demonstrated that the highest incidence and prevalence of concussion symptoms were present within minutes of the event and that measurable improvement occurred within hours. There was a predictable pattern of improvement over time without subsequent deterioration or later development of new or different complaints.

Overall, numerous randomized, controlled, prospective studies with baseline (prior to the concussion) symptom checklists, balance studies, and neuropsychological testing have provided convincing evidence that recovery from the cognitive, behavioral, and somatic complaints following a concussion occurs within the third month postinjury.

Patients and caregivers may underestimate how often symptoms such as headache, fatigue, and forgetfulness occur prior to mild head trauma and be prone to attribute those same symptoms to the recent trauma. The AAN guidelines recommend cognitive restructuring consisting of reassurance and education to help patients properly understand their symptoms, citing evidence that such treatment reduced the incidence of postconcussion syndrome.13

TBIs occur when trauma causes damage to the brain. The 2 most commonly used grading systems are the GCS and the Mayo Clinic classification. Concussions represent a TBI characterized by a loss or alteration in LOC, a period of amnesia, a nonfocal neurologic examination, and normal structural imaging studies of the brain. Consciousness requires an individual to be awake and aware. Altered awareness is evidenced by confusion. Following a concussion, patients often present with various somatic, behavioral, and cognitive complaints; however, such complaints are often encountered in normal populations as well as individuals with psychological diagnoses, chronic pain syndromes, and non-head-injury.

Based on numerous large, controlled, prospective studies, the natural recovery from a concussion is approximately 3 months. When an individual sustains a single isolated concussion, whether at home, in the athletic arena, at the job site, or because of a motor vehicle accident, a physician can confidently advise the patient, spouse, family, attorney, or any other interested party that the somatic, behavioral, and cognitive complaints will resolve.

24. The President’s Commission for the Study of Ethical Problems in Medicine and Biomedical and Behavioral Research. Deciding to Forgo Life-sustaining Treatment: A Report on Ethical, Medical, and Legal Issues in Treatment Decisions. Washington, DC: Government Printing Office. 1983:171-182.

41. Schretlen D, Shapiro AM. A quantitative review of the effects of traumatic brain injury on cognitive functioning. Int Rev Psychiatry. 2003;15:341-349.

55. Garden N, Sullivan KA. An examination of base rates of post concussion symptoms: the influence of demographics and depression. Appl Neuropsychol. 2010;17:1-7.

56. Chan RCK. Base rate of post-concussion symptoms among normal people and its neuropsychological correlates. Clin Rehabil. 2001;15:266-273.

Reversible and Benign Lesions of Splenium of The Corpus Collosum