Reversible and Benign Lesions of Splenium of The Corpus Collosum

Abnormal signal intensity in the splenium of the corpus callosum (SCC) on MRI has been reported in numerous neurologic and non-neurologic conditions. Multiple pathophysiologic mechanisms have been postulated, but none is well proven. In this case series, we describe 3 patients who presented with signal changes in the SCC on MRI findings and ultimately had different benign diagnoses. While 2 patients had small, ovoid midline lesions on the MRI, 1 patient had complete involvement of the splenium on T2-weighted and fluid-attenuated inversion recovery (FLAIR) image, which is also known as the boomerang sign. Given the rarity of transient benign SCC lesions, these cases often present a diagnostic and management dilemma. We discuss the differential diagnosis of splenial lesions and conclude that aggressive diagnostic and therapeutic approaches are often unnecessary.

A man aged 60 years with a medical history of undiagnosed neurocognitive disorder, which may have been an autism spectrum disorder, came to the hospital after 1 week of altered mental status. As described by the patient’s partner, the patient had recently been fired from his job as a messenger and subsequently became confused, began exhibiting bizarre behavior, and stopped eating for almost 1 week. The patient also had subjective fevers at home, but no temperature measurements were taken.

In the emergency department, the patient’s vital signs were temperature 100.3°F, pulse 103 beats per minute, blood pressure 126/85 mm Hg, and respiratory rate 18 breaths per minute. The patient’s blood tests showed a normal complete blood count and negative finding for HIV. His comprehensive metabolic panel was notable for elevated sodium to 153 mmol/L (normal range is 132-145 mmol/L), elevated blood urea nitrogen to 54 mg/dL (normal range is 7-23 mg/dL), elevated creatinine to 1.43 mg/dL (normal range is 0.50-1.30 mg/dL), and elevated aspartate aminotransferase to 105 U/L (normal range is 15-37 U/L). There were no findings from urinalysis or a urine toxicology screen. There were no findings on chest x-ray or head CT without contrast.

The patient was admitted to the hospital, and neurology was consulted. On neurological examination, the patient was alert, awake, and oriented to person and place, but not date. His speech was fluent with minimal dysarthria, intact naming, repetition, and comprehension of simple commands. His attention was impaired, and he was unable to spell WORLD backwards. A brain MRI without gadolinium showed a 7-mm solitary focus of restricted diffusion within the midline splenium of the corpus callosum (Figure 1). There were no findings from CT angiography of the head and neck with contrast, transthoracic echocardiogram with bubble, or EEG. A CT scan of the abdomen and pelvis without contrast showed hepatic steatosis. Blood sample analysis was repeated. 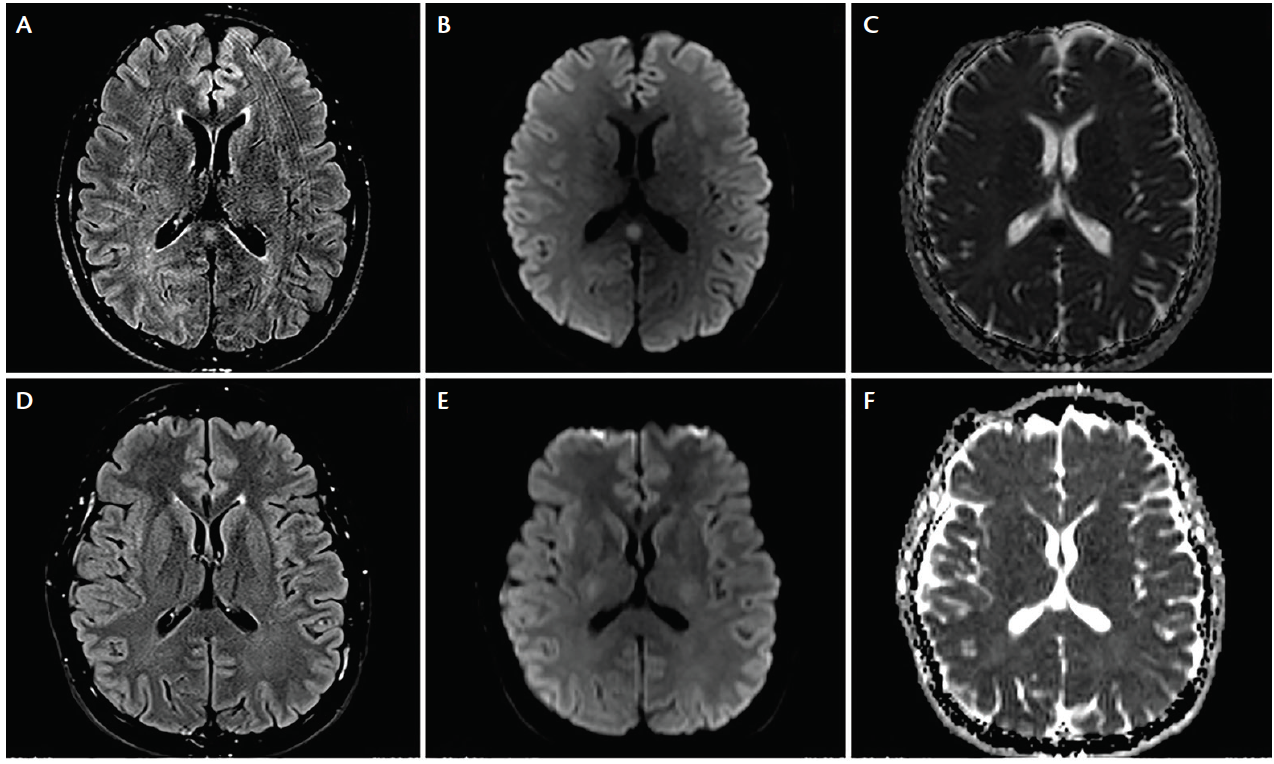 The patient’s hypernatremia resolved after intravenous fluid hydration, and his transaminitis resolved with supportive care. After 4 days in the hospital, the patient was medically optimized and showed improvement in his mental status.

A brain MRI was repeated 3 months later both with and without gadolinium and showed complete resolution of signal abnormality in the splenium of the corpus callosum, representing a so-called reversible splenial lesion (Figure 1).

A man aged 43 years with a past medical history of recurrent sinusitis and chronic headaches since his early 20s came to the otolaryngology clinic for work-up of sinus disease. A CT scan of his sinuses without contrast incidentally showed a mass in the right cerebellopontine angle. A subsequent brain MRI with and without gadolinium revealed a right vestibular schwannoma and an abnormal hyperintense signal centered in the splenium of the corpus callosum, which showed no abnormal enhancement or diffusion abnormality (Figure 2, A-C). 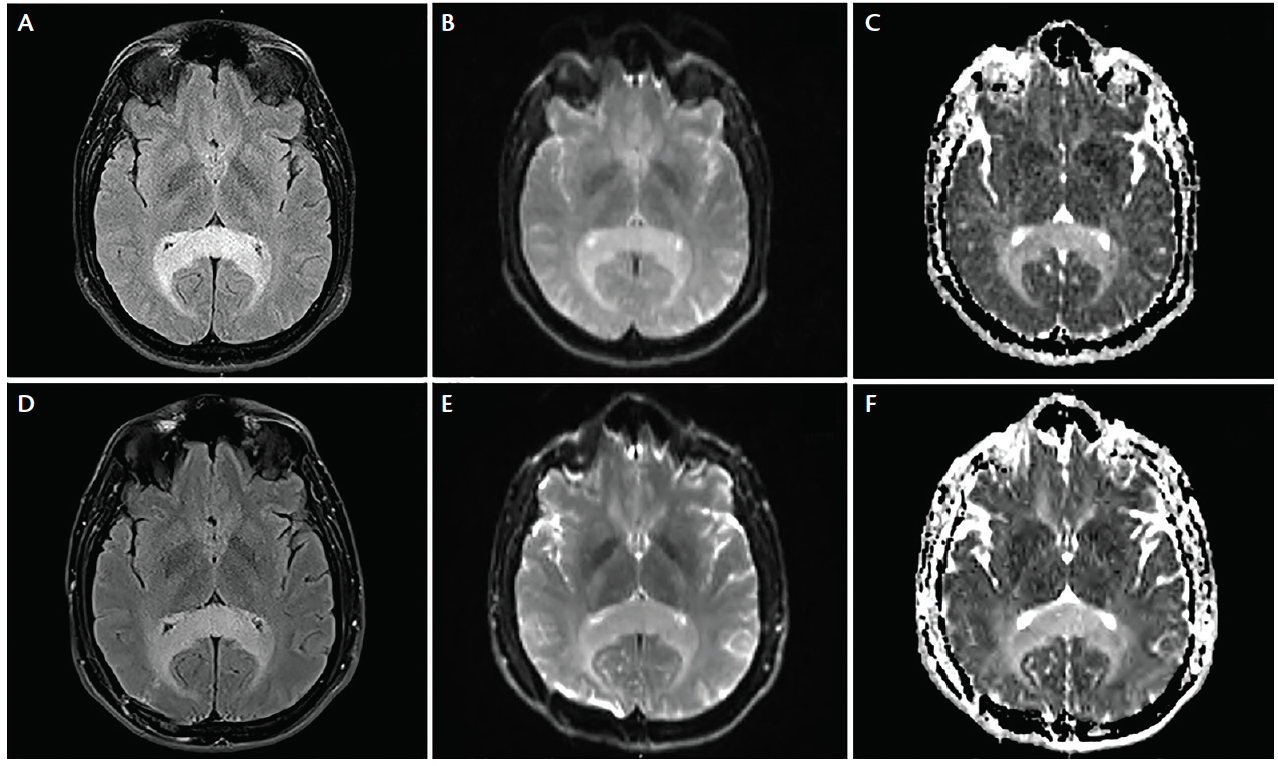 The otolaryngologist referred the patient to neurosurgery due to concern for an infiltrative glioma, and the patient had a right occipital craniotomy so that an excisional brain biopsy could be taken. Pathologic analysis of the biopsy sample showed white matter hypercellularity that on CD68 staining showed histiocytic infiltration and microgliosis (Figure 3). A glial fibrillary acidic protein (GFAP) stain showed astrogliosis. Although immunochemistry for IDH1 was negative, p53 and ki-67 staining highlighted the presence of rare cells. These biopsy findings were considered reactive and less likely a sign of infiltrative or diffuse low-grade glioma.

The patient was referred to neurology, and there were no findings on neurologic examination. Blood sample analysis findings were notable for elevated tumor necrosis factor-α (TNF-α) to 117 pg/mL (normal is 22 pg/mL or lower) and interleukin-13 to 11 pg/mL (normal is 5 pg/mL or lower). After 2 months, a lumbar puncture was performed, and CSF analysis showed a white blood cell count of <1/µL (normal is 5/µL), mildly elevated protein level to 50 mg/dL (normal range is 15-45 mg/dL), and normal glucose concentrations. The remainder of the CSF examination was negative, including gram stain, bacterial cultures, HSV 1+2 PCR, lactate dehydrogenase, β2-microglobulin, oligoclonal bands, myelin basic protein, IgG index, and cytology.

A woman aged 76 years came to the neurology clinic 3 weeks after a first episode of syncope. She was seated on the toilet when she developed dizziness associated with nausea and brief loss of consciousness (approximately 15 seconds).

There were no findings on neurological examination. A brain MRI without gadolinium showed an 8-mm rounded midline lesion with restricted diffusion in the splenium of the corpus callosum and questionable mass effect (Figure 4, A-C). This finding raised the possibility of a transient lesion of the splenium of the corpus callosum. With questionable mass effect, a small neoplastic lesion could not be entirely excluded. Neuroradiology recommended clinical correlation as well as post-contrast short-term follow-up imaging. There were no findings on magnetic resonance angiography of the brain without contrast. 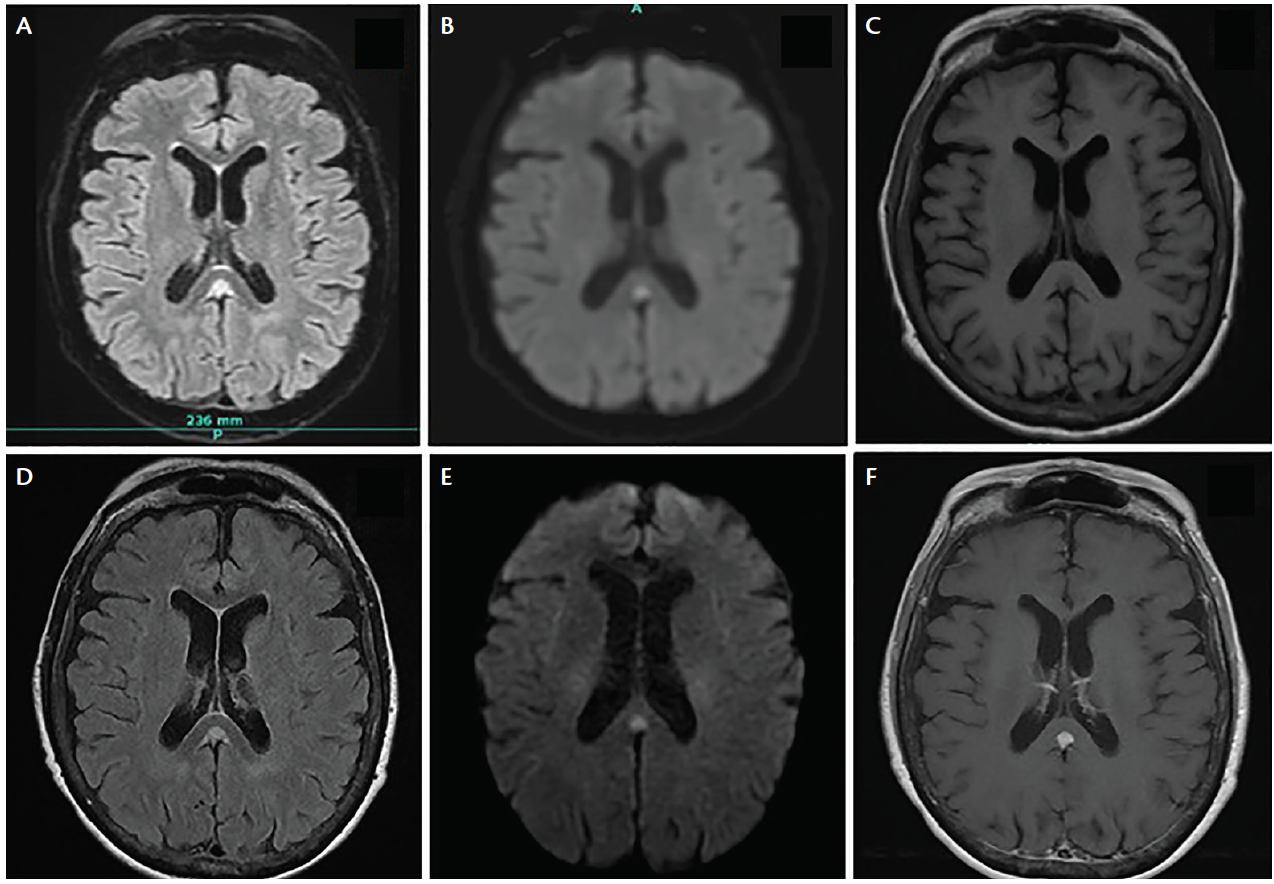 After 2 weeks, a repeat brain MRI with gadolinium showed a well-marginated, subcentimeter, extra-axial lesion posterior to the splenium of the corpus callosum with homogeneous enhancement consistent with a meningioma (Figure 4, D-F).

It remains largely unknown why such a broad range of neurologic disorders can result in a similar radiologic finding. Various pathophysiologic mechanisms have been postulated for the imaging abnormalities seen in reversible splenial lesions, including dysregulation of cellular fluid mechanics, intramyelinic edema, and inflammatory infiltration.4

In a study of clinical findings in 58 patients with SCC lesions, common signs and symptoms included confusion (60%), ataxia (43%), seizure (40%), hemispheric disconnection (24%), and dysarthria (22%).5 As a whole, the clinical features of a disconnection syndrome (apraxia of the left hand, pseudoneglect, alien hand syndrome, agraphia, alexia, visual apraxias) are thought to be rare in patients with benign and reversible SCC lesions.

Mild encephalitis/encephalopathy with reversible splenial lesion (MERS) was first described in a case series of 15 patients evaluated with reversible SCC lesions, mild neurologic symptoms, and a complete recovery.6 The patient described in case 1 presented with an encephalopathy in the setting of hypernatremia and was found to have a reversible splenial lesion on imaging compatible with MERS. Edema and diffusion restriction in a reversible SCC lesion have been attributed to excitotoxic mechanisms without brain ischemia.12 There are 2 distinct radiologic patterns of transient lesions in the SCC: (1) small, oval, well-circumscribed lesions in the midline within the substance of the corpus callosum; and (2) the boomerang sign, which consists of wider, irregular, ill-defined lesions involving the entire splenium and the adjacent hemispheres.13 On MRI, SCC lesions tend to have T1 signal hypointensity, T2 and FLAIR signal hyperintensity, diffusion-weighted imaging hyperintensity, and no abnormal enhancement on T1 postcontrast.14

It is important to note that not all lesions of the corpus callosum are aggressive and malignant. The patient described in case 2 had no symptoms other than headache, and the signal abnormality in the SCC was noted incidentally. Repeat imaging 3 months later showed persistence of splenial signal abnormality but no change in size or signal intensity, which is more suggestive of an inflammatory process. These findings are thought to be indicative of postinfectious encephalitis as the patient reported having had a history of infectious mononucleosis and Coxsackie virus infection a few years prior. Some infectious organisms have a predilection for the splenium, which might suggest that viral antigens or receptors on the antibodies induced by the antigens share affinities for specific receptors on splenial axons, inducing an inflammatory response, which leads to splenium inflammation.6 The lesion found in the patient described in case 3 was also identified incidentally. Initially, the imaging findings were thought to represent an intrinsic or reversible splenial lesion. However, when the MRI was repeated with contrast, it became clear that the lesion was extra-axial and most suggestive of benign meningioma. Interestingly, there were no signs or symptoms of a hemispheric disconnection syndrome in any of our 3 cases.

An extensive array of diseases can involve the splenium of the corpus callosum. Enhanced knowledge of the differential diagnosis and radiologic findings can be helpful for the appropriate approach to workup and management. In addition, the clinical outcomes in patients with isolated splenium lesions is generally favorable. Therefore, invasive procedures and exhaustive testing should be avoided when possible. Further descriptive studies on splenium abnormalities are needed.

2. Raybaud C. The corpus callosum, the other great forebrain commissures, and the septum pellucidum: anatomy, development, and malformation. Neuroradiology. 2010;52(6):447-77.

4. Takanashi J, Barkovich AJ, Yamaguchi K, Kohno Y. Influenza-associated encephalitis/encephalopathy with a reversible lesion in the splenium of the corpus callosum: a case report and literature review. Am J Neuroradiol. 2004;25:798-802.