A report from the 6th International Congress on Multisystem Atrophy.

The 6th International Congress on Multi-system Atrophy met in March, 2018 in New York City and focused on continuing to establish multisystem atrophy (MSA) as a separate, unique disease with unique pathology, diagnostic hurdles, and nuanced treatment.

First described in 1960 by Milton Shy and Glen Drager, MSA is a parkinsonian movement disorder with orthostatic hypotension and other autonomic features. In 1969, what was then known as Shy-Drager syndrome was grouped with striatonigral and olivopontocerebellar degeneration under the umbrella term multisystem atrophy because all patients with all 3 disorders had similar presentations. This clinical similarity was pathologically linked in the 1990s when autopsied brains from 11 subjects with these illnesses were found to have glial cytoplasmic inclusions of α-synuclein, affirming the parksinsonian relationship.1

The incidence of MSA is 3:100,000 in adults aged over 50 years, and the course of illness lasts 5 to 10 years. There are 2 known groups: MSA-P (parkinsonian) and MSA-C (cerebellar) that have clinical presentations associating them closely with more common movement disorders (eg, Parkinson’s disease [PD] and ataxia). Patients with MSA often move slowly and have gait and balance problems, autonomic dysfunction, corticospinal tract findings, and sometimes tremor or stiffness. MSA is not as responsive to treatment, and the clinical course of worsening symptoms seems accelerated compared to PD.2

A common link between MSA and PD is α-synuclein, but how this protein causes neurodegenerative effects in the 2 disorders appears to be distinct. Patients with MSA have degeneration of striatonigral and olivopontocerebellar structures due to glial inclusion of α-synuclein, distinct from intracellular inclusions seen in PD.1

How α-synuclein inclusions form and spread is still a topic of debate. Several studies have shown that misfolded α-synuclein is present in a number of degenerative processes, but these disruptions are also associated with normal aging. This raises the question of whether aging causes α-synuclein pathologies or if some other pathology accelerates the aging process, resulting in α-synuclein inclusions.3

The prion hypothesis, a theory that has been gaining support, was presented as the plenary lecture. Dr. Stanley Prusiner discussed experiments in which α-synuclein samples from the brains of 14 patients who had MSA were transmitted to homozygous mice. After an incubation of 120 days, the mice developed neurodegeneration that was accompanied by deposition of α-synuclein in cell bodies and axons. Control, sham-infected mice as well as those infected with α-synuclein from the brains of patients who had PD did not develop neurodegeneration. Although controversial, these data are compelling and support the idea that despite clinical and pathologic similarities, MSA and PD are distinct points on a spectrum of neurodegeneration.

Consensus criteria for the diagnosis of MSA were established in 2008 and include 3 levels of certainty: possible, probable, and definite as shown in the Table.2 Leaders at the conference discussed the possibility of revising the criteria in order to identify patients with MSA earlier in the disease course for the purpose of improving recruitment of subjects for epidemiologic studies and clinical trials. 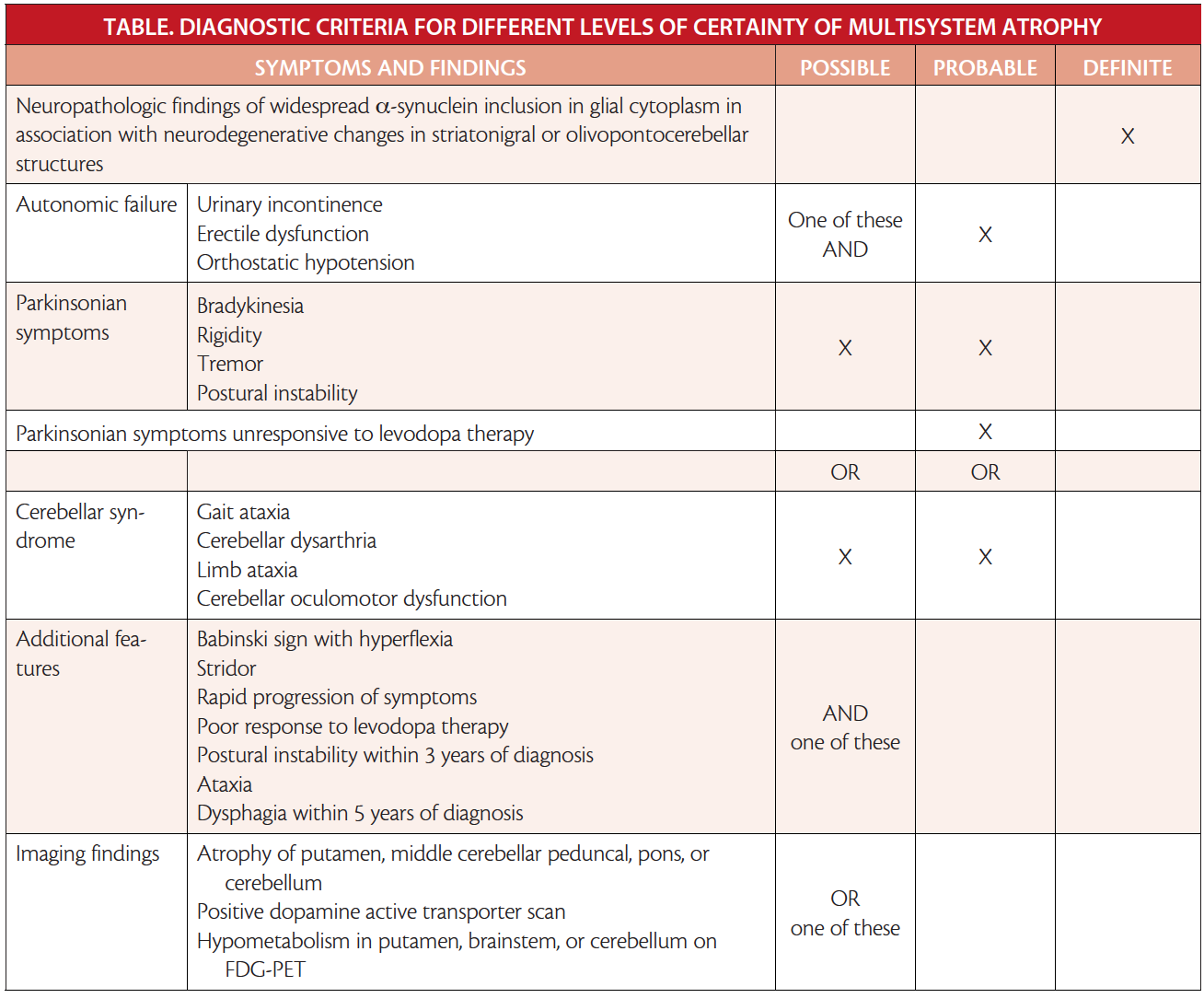 Suggestions included placing less emphasis on response to levodopa treatment because some patients with MSA-P have a clinically significant, although waning, response to levodopa therapy.2 Increasing the emphasis on objective imaging findings was also suggested, although a the argument was made that these findings often do not become present until later in the course of MSA. The case was made for early autonomic testing across multiple systems (eg, cardiovascular, urologic and pseudomotor), as this has proven useful in differentiating patients with MSA from those who have other forms of ataxia and PD. Scintigraphy with [123I]-metaiodobenzylguanidine (MIBG) enables the quantification of postganglionic sympathetic cardiac innervation and is the most sensitive test for such differentiation. The practicality of ordering autonomic tests remains difficult, however, given the limited number of centers that perform the tests and the reluctance of insurance companies to pay for them.

For establishing orthostatic hypotension to diagnose probable MSA, the 2008 consensus criteria give a definition of a drop in systolic blood pressure by 30 mm Hg or more, or a drop in diastolic blood pressure by 15 mm Hg or more after 3 minutes. Diagnosis of possible MSA does not require such strict parameters for orthostatic hypotension. Medications to treat orthostatic hypotension, including fludrocortisone, midodrine, pyridostigmine, and droxidopa, have targeted increasing blood volume or peripheral vascular tone. The largest concern with these medications is supine hypertension, which can be modulated with dosing, timing (ie, not taking it too late in the day), or sleeping on a wedge.

As presented at the conference, droxidopa increases vagal tone via effects on norepinephrine receptors. Combination therapy including pyridostigmine and atomoxetine is under investigation. Pyridostigmine acts through cholinesterase inhibition and can improve sympathetic tone and improve upright blood pressure; together with the norepinephrine blockade of atomoxetine, blood pressure may improve in patients with MSA.

Presenter Dr. Philip Low shared guidance on nonpharmacologic treatments. Abdominal binders may be more beneficial than compression stockings because most orthostatic blood pooling occurs in abdomen. Encouraging patients to walk like a gorilla (ie, flexed forward with bent knees and straight arms) may also be helpful, especially at night if they get up to use the bathroom.

Many sleep disorders seen in patients with MSA are also seen in those with PD, with the exception of stridor, which is believed to be caused by atrophy of the posterior cricoarytenoid muscle resulting from lack of neural stimulation owing to depletion of serotonergic neurons in the raphe nucleus.4 Continuous positive airway pressure (CPAP) is the first-line treatment for stridor. Patients with severe cases may require tracheostomy, although this does not reduce mortality.

A presentation on sleep disturbances by Dr. Pietro Cortelli reviewed general treatment recommendations. If motor symptoms are a contributing factor to sleep disorders, maximize dopaminergic medications. Address sleep hygiene with behavioral modification or melatonin up to 15 mg/night. Treat insomnia with zolpidem (5 to 10 mg daily) or eszopiclone (1 mg daily) initially and then with a maintenance dose of trazodone (25 mg to 75 mg daily) or doxepin (10 mg daily).

For nocturia, maximize dopaminergic therapy and utilize behavioral modifications as follows: reduce fluid intake after 6:00 PM, avoid alcohol and coffee, tilt the head of the bed up, and avoid diuretic use before sleep. Some studies suggest rotigotine may be effective in addressing motor symptoms and nocturia. Specific pharmacologic therapies suggested include solifenacin (5 mg to 10 mg daily), darifenacin (7.5 mg daily), or tolterodine (2 mg daily).

For REM-behavioral sleep disorder, melatonin and klonopin are standard, and withdrawal of medications that can exacerbate symptoms is also important. These include nonselective monoamine oxidase inhibitors, stimulating antidepressants, β-blockers, opioids, and selective α-2 agonists.

Strategies for managing excessive daytime sleepiness are first behavioral and should include stressing sleep hygiene, regular daytime physical activity, and avoiding vigorous activity 3 to 4 hours before sleep. Any breathing issues should be addressed. Sedative medications such as neuroleptics, antidepressants, or benzodiazepines should be reduced as should dopaminergic load, if possible. Use a monoamine oxidase B inhibitor rather than a dopamine agonist. A trial of stimulants may be considered, although these have not been overly robust in their effects.

Bladder dysfunction occurs in patients with both PD and MSA, and measurement of postvoid residuals (PVRs) can also help distinguish between PD and MSA. PVR is elevated in patients with MSA because there is more urinary retention compared to those with PD, which has more prevalence of detrusor overactivity.3 The mechanism is hypothesized to be the reduction in the inhibition on the micturition centers because of the reduction of signal from the basal ganglia. First-line treatment for bladder dysfunction is usually anticholinergics, but a newer class of β3-adrenergic agonists are being utilized as they have little to no central cognitive impact.

Posterior tibial nerve stimulation is also being explored as potential treatment for bladder dysfunction in patients with MSA and PD. Although the exact mechanism is not known, this has been shown to suppress detrusor overactivity.3

As with most neurodegenerative diseases, we are at a fork in the road, with one path leading toward disease-modifying treatments and the other to symptomatic management. For the latter, currently in phase 2 trials, TD-9855 is being studied for the treatment of neurogenic orthostatic hypotension, as a daily-dose compound with vasogenic tone properties. For disease modification, studies of possible therapies run the gamut from autophagy, to active immunization, vaccination, and stem cells.

Although it is likely that MSA and PD will always be intertwined, MSA is emerging as a distinct pathology. Ideally, researchers and clinicians will use what is learned about each of these disorders to inform and advance understanding and clinical care for the other. Conferences like the 6th International Multisystem Atrophy Congress promote this, and as the mysteries of MSA begin to be solved and treatments become more applicable for the nuanced symptoms of MSA, all patients with diseases along this neurodegenerative spectrum will reap the benefits.

The Speed of Trust Advances Treatments