There are many highly interconnected barriers to timely dementia care. These include factors related to the disease, patients, caregivers, providers, and the health care system. Along with these factors, cultural and health-related beliefs affect both patients’ and caregivers’ abilities to discuss concerns and needs with providers and their ability to navigate the health care system (Table).1,2 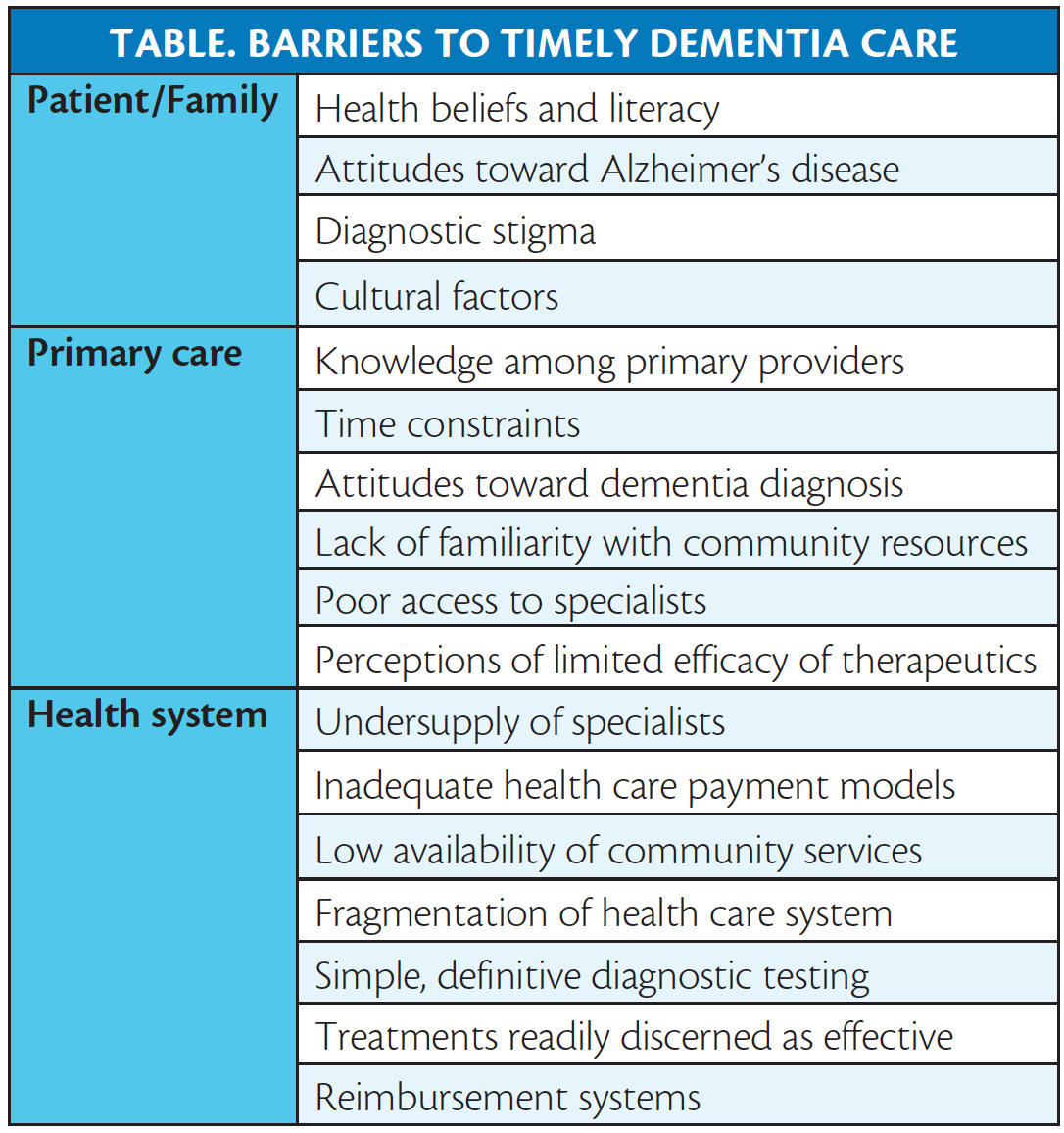 As a result, recognition of Alzheimer’s disease (AD) symptoms as a trigger for medical concern trails 1 to 2 years after they first appear. It then takes an average of 20 more months to obtain a confirmatory diagnosis.3

At the only neurology-based specialty clinic for dementia in a primarily rural service area of >6 million people, patients are often not seen early in the course of AD. Among 335 patients diagnosed with AD or dementia over a 3-year period from 2012 to 2015, the mean score on the 30-point Alabama Brief Cognitive Screener (ABCs, a local equivalent of the MiniMental State Examination) was 15.5, indicating moderate-stage dementia. Given a strong correlation between ABCs scores and degree of functional decline, patients are entering expert care at a stage of substantial dependence.

The referral process is further complicated by low correlations between subjective memory complaints and measureable cognitive dysfunction in the primary care setting.4 Coupled with relative undertraining of non-neurologists in neurologic conditions, this results in a large number of referrals of people with non-AD cognitive issues that could be addressed in the primary care setting (eg, medication effects, mood disorders, chronic pain, and sleep disorders) to neurologists, who are an already scarce resource.5

Barriers to diagnosis emerge before the medical system has been engaged. Memory loss has been recognized as an accompaniment to normal aging since antiquity. Distinguishing normal aging from the incipient anterograde amnesia and semantic losses associated with AD can be challenging even for skilled diagnosticians. Both anosognosia and apathy emerge early in the course of illness for many with AD,6 making it difficult for them to act upon their deficits.

Patients and family members describe negative emotional connotations and may perceive that having dementia will lead to loss of identity, competency, and independence, adversely affecting social interactions and privileges.3,7 Low health literacy also affects patients and family members’ ability to seek care. People with higher knowledge of the disease are more likely to accept cognitive screening and understand the benefits of advance health care planning, thus increasing the probability of early diagnosis. This knowledge contributes to seeking care proactively, searching for access to community services, and delaying the need for institutional care.8-10

Different ethnic groups’ knowledge, beliefs, and practices also influence familial roles, perceived susceptibility, and self-efficacy regarding AD. For example, members of the African American community are more likely to associate memory loss with normal aging or God’s will and tend to consider stress, head injuries, exposure to toxins, mental illness, excessive alcohol intake, and smoking as risk factors for developing the disease, while undervaluing the influence of genetics.11-13 Similarly, members of the Hispanic community consider stress as a risk factor for AD and underestimate the protective role of mental activity.13 Considering stress a risk factor increases the fear of perceived stigma as it implies the individual is somehow responsible for the problem, thus decreasing their likelihood to seek care.

These perceptions suggest a lower knowledge and concern about AD within minority communities, making them less likely to recognize early symptoms of the disease and seek diagnosis from primary care providers (PCPs) or specialists. Instead they seek medical guidance when the behavioral symptoms are severe. These different conceptions of AD point toward diverse disease models among ethnic groups and the need for culturally tailored interventions.3

The extensive literature on barriers to early diagnosis and referral of AD among PCPs has been reviewed in detail.3 PCPs voice low confidence in their ability to diagnose early stages of AD, citing a lack of adequate training. A lack of time for adequate cognitive testing is identified as the main barrier in primary care settings. There is also a “Pandora’s box” mentality associated with dementia diagnosis, in that it creates a need to provide care for a complex, unfamiliar, time-consuming, and psychosocially demanding illness.14 Even the value of making a dementia diagnosis has been questioned, especially because of a broad perception that available dementia therapeutics are ineffective, dangerous, or both.15 This is complicated by limited time to teach or implement nonpharmacologic treatment strategies and inadequate compensation for such work. A relative lack of familiarity with the community resources available to support patients and families and the time needed to introduce these options also limits many PCPs’ abilities to engage appropriate interdisciplinary care for their patients. Referral to specialists is an obvious alternative that is preferred by many PCPs. However, the PCP community identifies difficulty accessing specialists with long wait times and a relative dearth of those specialists, especially in rural areas.2 This is further complicated by a severe undersupply of dementia-specialist neurologists, which can only be expected to increase over the next decade.16

Breaking Through the Barriers

There are 2 AD-specific breakthroughs that will likely be needed to tip the balance toward accelerated dementia care. The lessons about what is needed can be learned from other illnesses. The first unmet need is for an objective, quantitative, inexpensive, and highly specific biomarker test, preferably a blood test (eg, hemoglobin A1C for type 2 diabetes mellitus). Gone are the days of diagnosing diabetes from histories of gradually emerging polydipsia, polyuria, and weight loss. In the face of the HbA1C, long and unpleasant glucose tolerance tests are fading away. Instead, one abnormal blood test confirms the biological diagnosis and triggers well-compensated interdisciplinary care, including access to a diabetes educator. Imagine having a blood test (or panel) that unquestionably confirms the presence of AD, in advance of symptoms, and, more importantly, triggers a readily available, ongoing, and nonpharmacologic care solution that can operate independently of physician management. The parallel of diabetes to AD is further reinforced by the fact that currently available and projected medications do not cure diabetes, but rather facilitate symptom management and delay the onset of complications. A diabetes diagnosis also opens up expectations for systematized specialty care options, such as annual ophthalmologic assessment and specialty consultation for difficult cases.

The second needed breakthrough is, of course, safe, well-tolerated, and reasonably inexpensive medications that significantly improve the disease’s symptoms or discernibly alter its course. As with the one-time blood test for diabetes, an example of the importance of easy-to-use medication for a common condition already exists. Depression, like incipient dementia, has a multitude of symptoms that could be related to other conditions, can consume a lot of time and effort in diagnosis and treatment, and results in important quality-of-life and public health implications. As with dementia today, there was extensive dialogue in the 1990s about the need for PCPs to become engaged in the diagnosis and management of depression.17,18 Prior to the late 1980s, the diagnosis was stigmatizing, and available treatments were relatively poorly tolerated (eg, tricyclic agents) or time-consuming, requiring cumbersome referral to specialists (counseling). The introduction of fluoxetine, rapidly followed by other effective and well-tolerated selective serotonin reuptake inhibitors (SSRIs), led to a 4-fold increase in the treatment of depression by PCPs over a 10-year period.19 While driven in part by well-funded marketing and provider-education campaigns, the critical key to clinical success was not efficacy, but rather safety, with SSRIs having a number needed to harm (NNH) on the order of 10 times the NNH for tricyclic agents.20 In AD, the primary opportunity is for better efficacy, but the antidepressant story tells us that safety concerns on any new agents will likely inhibit uptake in the primary care setting.

Barriers to better access for dementia care extend across a spectrum of individuals, cultures, providers, and health systems. Although knowledge about dementia has increased dramatically since the first targeted therapeutics came to the marketplace in 1993, fatalism and nihilism remain dominant factors among patients and providers. The problem is compounded by the US health care system’s dramatic undervaluing of the complexity of care for affected individuals and their familes, as well as a payment structure that limits implementation of innovative solutions like telehealth21 and advanced nursing-based management.22 The critical steps in resolving the problems lie in demystifying diagnosis with an objective biomarker test and providing therapeutics with readily apparent benefits to individual and public health.

3. Aminzadeh F, Molnar FJ, Dalziel WB, Ayotte D. A review of barriers and enablers to diagnosis and management of persons with dementia in primary care. Can Geriatr J. 2012;15:85-94.

10. Koch T and Iliffe S. Rapid appraisal of barriers to the diagnosis and management of patients with dementia in primary care: a systematic review. BMC Fam Pract. 2010;11.

14. Martin S, Kelly S, Khan A, et al. Attitudes and preferences towards screening for dementia: a systematic review of the literature. BMC Geriatr. 2015;15:66.

16. Rao A, Manteau-Rao M, and Aggarwal NT. Dementia neurology deserts: what are they and where are they located in the U.S.? Alzheimer Dement. 13:P509.

The author report no conflicts of interest.