Is the cause of MS within us?

At the recent annual meeting of the Consortium of Multiple Sclerosis Centers in Nashville, researchers presented an exciting 48-week update of the phase 2 clinical trial assessing the pHERV-W Env antagonist, GNbAC1, for efficacy in treating patients with MS (CHANGE-MS). The compound being studied, GNbAC1, targets the envelope protein (Env) of the human endogenous multiple sclerosis-associated retro-virus (HERV-W/MSRV), thought to play a critical role in the pathophysiology of multiple sclerosis (MS).

Potential Breakthrough Relevance: Addressing the Cause of MS

Clinical trials of GNbAC1 also test a new hypothesis for the actual cause of MS.1-4 The antigen for GNbAC1 is an Env protein found on monocytes and microglia. The Env protein is encoded for by a type of DNA element termed a pathogenic human endogenous retrovirus (pHERV). These represent ancient viral DNA incorporated into the human genome millions of years ago. Approximately 8% of the human genome consists of such viral DNA incorporations.

Efficacy of GNbAC1 in MS suggests that the initial viral trigger for MS is not simply an early childhood viral exposure that triggers MS in a genetically susceptible individual. These results suggest instead that the initial viral basis of MS is some of the ancient viral DNA in our genome lying dormant within us that is derepressed by environmental viruses (eg, Epstein-Barr virus).5

The 24-week results of CHANGE-MS showed a statistical trend favoring remyelination at the highest dose tested (18 mg/kg monthly).6 All patients who had not dropped out of the 24-week placebo-controlled trial (n = 247) continued on active treatment. Patients who had been treated with placebo were randomized to doses of 6 mg/kg, 12 mg/kg, or 18 mg/kg GNbAC1 given monthly.

Benefit on Slowing Down Brain Atrophy 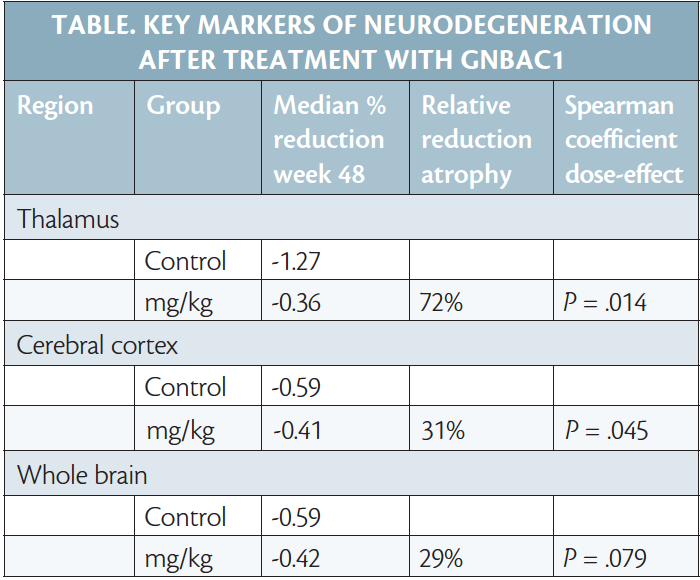 After another 24 weeks (week 48), analysis compared patients who had been continuously treated with one of the escalating doses of GNbAC1 to the control group that had been treated with placebo for the first 24 weeks, then by 6 mg/kg, 12 mg/kg, or 18 mg/kg monthly for an additional 24 weeks). Patients who had been treated continuously with 18 mg/kg of GNbAC1 had brain imaging evidence for benefit on key markers of neurodegeneration (Table), linked to disease progression:

There was a 63% reduction in the mean number of larger (> 14 mm3 volume) new T1 hypointensities in patients treated continuously with 18 mg/kg of GNbAC1 monthly compared to the control group (P = .014).

The MTR benefit of GNbAC1 18 mg/kg relative to the placebo group at 6 months remained stable versus the control group at 12 months, suggesting that GNbAC1 is beneficial in remyelination.

Safety and tolerability of GNbAC1 remained good, giving hope that GNbAC1 may be a safe treatment option to combat neurodegeneration. It seems clear that the benefit of GNbAC1 for patients with MS is mainly slowing of neurodegeneration and possible neuroprotection/remyelination, rather than a reduction of neuroinflammation. Higher doses of GNbAC1 should be tested in people with MS to see if an even more robust effect can be seen.

The 48-week results of CHANGE-MS are important because this trial is the first clinical demonstration of benefit with an anti-HERV antibody. There are ongoing proof-of-concept trials of GNbAC1 for type 1 diabetes mellitus, and the FDA has already granted an orphan drug designation for GNbAC1 for chronic inflammatory demyelinating polyneuropathy.7

Lester E. Potts, An Artist Who Had Alzheimer's Disease

We Are All Headache Specialists