Sleep and circadian rhythm disturbances are symptoms of Alzheimer's disease that may also contribute to disease pathogenesis.

The high prevalence and public impact of Alzheimer’s disease (AD) make research efforts to uncover potential modifiable risk factors critically important. Sleep and circadian rhythm disturbances are common in patients with AD, especially as the disease progresses. However, an emerging literature supports the idea that sleep and circadian rhythm disturbances occur very early in the disease and may influence AD pathogenesis. This suggests that disrupted sleep and circadian timing may be modifiable risk factors. Data from mouse models show a strong relationship between sleep and the regulation of amyloid-β peptide (Aβ), the principal component of the amyloid plaques that define AD pathologically. In humans, acute sleep deprivation can drive increased Aβ levels, further supporting this relationship. Chronic sleep problems are associated with AD neuropathology, although a causal relationship has not been definitely proven.

Sleep quality and timing tend to change as individuals age and can be severely disrupted in AD dementia (ADD). The timing of sleep is strongly influenced by the circadian system, which generates 24-hour rhythms in many biological processes, synchronizing these to the external light-dark cycle. People with robust circadian timing enjoy consistent waketimes and bedtimes, active days, and restful nights. Although sleep is separate from the circadian clock, the circadian system prompts sleep at night by timing release of melatonin and direct signaling to sleep nuclei in the brain. Disrupted circadian function can lead to fragmented sleep timing, often manifested as erratic sleep at night and frequent napping during the day. This pattern is often observed in patients with ADD and can range from mild fragmentation of sleep timing to total breakdown of day-night boundaries.1 Patients with AD have neuronal degeneration in the suprachiasmatic nucleus of the hypothalamus, the master circadian clock of the body, that may underlie this fragmentation.2 Patients with AD also have changes in sleep itself, including decreases in both rapid eye movement (REM) sleep and slow-wave nonREM sleep.3 Changes in circadian sleep timing and sleep quality can be a major problem for caregivers and are a leading cause of institutionalization for patients with AD.

Although sleep and circadian disturbances in ADD have been long-appreciated, it is only recent advances in biomarkers of AD that allow researchers to investigate these changes very early in the disease course, even prior to the onset of clinical symptoms. Longitudinal biomarker studies show that amyloid plaque pathology is present for many years, perhaps even decades, before cognitive symptoms occur. Increased levels of tau protein in the cerebrospinal fluid (CSF), another pathologic hallmark of AD, also precede the onset of cognitive decline by a few years. Individuals with evidence of amyloid or amyloid and tau pathology are now defined as having preclinical AD in research studies. Preclinical AD is associated with self-reports of poor sleep,4,5 difficulty going to sleep,6 and excessive daytime sleepiness,7 and objective measures of poor sleep efficiency (ie, more time in bed without sleep) and increased daytime napping.8 Fragmentation of circadian rhythms during activity is also detectable in preclinical AD, suggesting that AD-related changes to the circadian system may underlie some of the observed changes in sleep.9 Taken together, these data make it clear that sleep and circadian disturbances begin during preclinical AD and may predict eventual ADD, although longitudinal studies are still needed to define causality of such a relationship.

Epidemiologic researchers have examined whether sleep quality or duration over a lifetime influences risk for having AD. Studies in adults over age 65 associate poor sleep with increased risk of developing dementia,10,11 although it is unclear if this reflects undiagnosed preclinical AD, or if sleep changes precede amyloid plaque deposition. Long average sleep duration (ie, >12 h/night) is also associated with increased risk of developing symptomatic AD.12 However, this effect is seen primarily in individuals who likely had early-stage AD already. One interpretation of this correlation is that people begin to sleep longer in the early stages of the disease rather than long sleep being a risk factor earlier in life. Fragmented sleep and circadian rhythm function can precede the onset of symptomatic dementia. Sleep fragmentation13 and less robust circadian function14 in adults with an average age of 81 to 82 years who had no cognitive impairments are both associated with increased risk of developing AD within 5 years. Changes in sleep and circadian function, in particular daytime sleepiness, fragmented sleep at night, and increased daytime sleep, may be indicators of impending ADD.

Mouse models of AD are providing insights into how sleep and circadian disruption may play a causative role in the development of AD. As a result of synaptic activity, neurons release Aβ>and aggregates in a concentration-dependent manner to form amyloid plaques in AD. In mice, extracellular levels of Aβ in the brain show a clear daily rhythm; levels increase during waking hours and decrease during sleep.15 Disrupting circadian rhythms in mice by deletion of a key circadian clock gene leads to fragmented sleep timing and loss of Aβ rhythms, suggesting that the circadian system controls Aβ>rhythms in the brain, likely by controlling sleep timing.16 Both sleep deprivation and disruption of circadian rhythms caused accelerated amyloid plaque formation in mice, suggesting a key role for sleep in amyloid plaque regulation.15 In contrast, increasing sleep by treating mice with an orexin antagonist leads to marked decreases in plaque pathology. 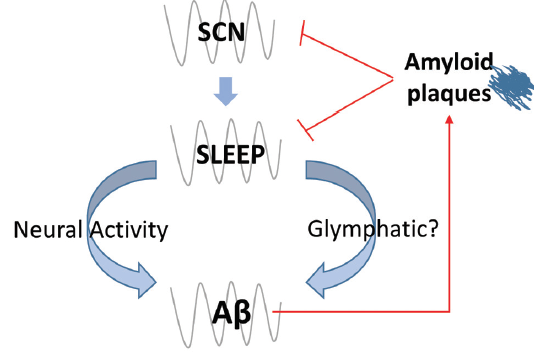 Figure. From studies in mice and humans it is hypothesized that neural and glymphatic activity during sleep are involved in release of amyloid-b (Ab), which when converted to amyloid plaques has an inhibitory impact on sleep.

The mechanisms linking sleep and amyloid pathology are not yet known. Because neuronal activity increases Aβ/span>levels, a possible explanation is that rhythms in Aβ levels reflect changes in neural activity during sleep and wake. Supporting this theory is that Aβ>rhythms in the brain correlate closely not only with sleep rhythms, but also with lactate levels, which are a marker of neuronal activity.17 Clearance of Aβ from the brain may also play a role. In mice, sleep is associated with increased lymphatic-like circulation of extracellular fluid through the brain, termed glymphatic flow because of the importance of glia in the process. Increased glymphatic flow has been proposed as a mechanism of Aβ clearance during sleep,18 and ongoing studies in humans are examining the potential role of impaired glymphatic flow in AD (Figure).

The relationship between sleep and circadian rhythms and Aβ>seems to be present in humans. Similar to mice, there are daily rhythms in CSF Aβ>levels in humans, although it is unknown if the circadian clock regulates these oscillations.19 Healthy volunteers who experienced acute sleep deprivation for 1 night sustained increases of CSF Aβ levels.20 Specific disruption of slow-wave sleep for 1 night, with sparing of other types of sleep, also led to increased CSF Aβ levels in healthy volunteers the next morning.21 Partial sleep deprivation without disruption of slow-wave sleep had no effect on CSF Aβ, emphasizing a key role for slow-wave sleep in regulating CSF Aβ levels.22 Thus, acute sleep deprivation, and particularly loss of slow-wave sleep, appears to increase Aβ>levels in humans, suggesting that chronic sleep deprivation might promote amyloid plaque formation over time. An imaging study using amyloid positron emission tomography suggests that 1 night of sleep deprivation increased amyloid signal in the hippocampus of healthy volunteers.23 Although this result is controversial and needs replication, it suggests a very rapid effect of sleep loss not only on soluble Aβ/span>levels, but also Aβ>aggregation and plaque formation. In general, accumulating evidence from human subjects supports an acute effect of sleep deprivation on Aβ dynamics, while the effect of chronic sleep disturbances on plaque formation is still under investigation.

The treatment of sleep and circadian disruption in patients with ADD has been an area of considerable difficulty. Many sleep-promoting agents, including benzodiazepines, antihistamines, and so-called Z-drugs, are sedating and not recommended in patients with AD. Atypical antipsychotics are often used to treat agitation and promote sleep in patients with AD. However, these medications carry a black-box warning due to increased risk of death, and use is controversial. Melatonin supplementation, often combined with morning light exposure, may have some utility in improving circadian function, although the effect is often modest. Other medications, including trazodone or low-dose mirtazapine, also have modest efficacy in some cases. Orexin antagonists have not been thoroughly tested in patients with AD. An approach that utilizes nonpharmacologic strategies, such as keeping consistent waketimes and bedtimes, ensuring exposure to daylight early in the morning, practicing good sleep hygiene, and using nonsedating therapies (such as melatonin), is a good starting point, although stronger pharmacologic agents are ultimately needed as well. Often, treatment of sleep and circadian problems in patients with dementia is a process of trial and error, emphasizing the need for more effective pharmacologic and behavioral therapies.

An important unresolved question is whether sleep or circadian therapies in healthy people might help to prevent AD. In mice, increasing sleep with orexin antagonists markedly inhibits amyloid plaque formation.24 CSF levels of orexin increase in humans with decreased sleep, and also correlate with levels of phosphorylated tau protein, a biomarker of AD neuropathology.25 Although there is great interest in the use of orexin antagonists to promote sleep in patients with AD, there are no published studies of this to date. It is also important to note that although sleep deprivation increases levels of CSF Aβ in humans, increasing sleep with sodium oxybate, a drug approved for treatment of narcolepsy, did not appreciably decrease CSF Aβ>levels below normal.20 Thus, although sleep deprivation appears to promote Aβ secretion and accumulation, it remains to be seen if increasing sleep in individuals who already sleep normally has any further protective effect.

Dr. Musiek has consulted for Eisai Pharmaceuticals. He reports no financial conflicts of interest.