The central theme is supportive care aimed at improving quality of life.

It is estimated that 5.3 million people in the US have Alzheimer’s disease (AD) and that a new individual is diagnosed with the disease every 70 seconds.1 This devastating disease is reaching epidemic proportions, and there are no effective therapies to prevent onset or stop disease progression. This article covers current guidelines on clinical management of patients with AD and clinical use of imaging biomarkers in light of new technological advances. 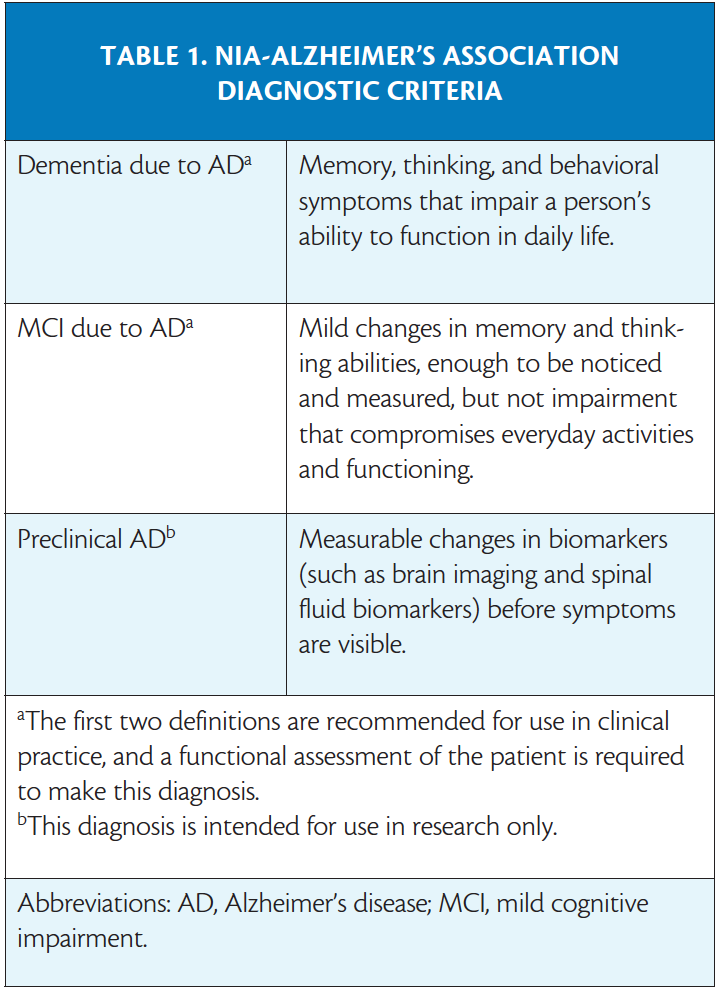 AD is the most common form of dementia, comprising 60% to 70% of all cases. It is a clinical diagnosis of progressive cognitive and functional decline. The diagnostic guidelines for AD were revised in 2011 as the NIA-Alzheimer’s Association criteria (Table 1).2

Clinical evaluation of patients with memory loss requires an effective history, often provided by a collateral informant. There are numerous objective scales used to characterize the level of cognitive impairment, including the Clinical Dementia Rating (CDR) and Dementia Severity Rating Scale (DSRS), which are limited by time available for assessment. Regardless of objective functional rating scales, the goal of the clinical history is to obtain the following key information:

Symptom onset. Although initial memory loss symptoms are often missed or attributed to typical aging, when symptoms progress to cause significant functional impairment, a retrospective timeline of memory loss often is obtained. The clinician must consider whether symptoms are sudden in onset, which would be uncommon for AD, or if they are slowly progressive symptoms that were suddenly noted.

While there may be significant overlap in clinical symptoms and pathologies, especially in much older adults,3 making a clinical diagnosis of AD dementia includes ruling out or establishing a lower likelihood of an alternate diagnosis. Patients who have a significant discrepancies between functional abilities and objective cognitive measures may have other disorders (eg, mood disorders, schizophrenia, other psychiatric disorders, sleep disturbances, or substance abuse) or be experiencing side effects of anticholinergic drugs, all of which can cause memory impairments and should be assessed directly whenever possible. The American Academy of Neurology (AAN) recommends including screening for depression, vitamin B12 deficiency, and hypothyroidism in the routine evaluation of dementia and allowing specific risk factors to guide any additional testing.4 Lumbar puncture is not recommended for routine evaluation of dementia unless being used to rule out other disorders of the central nervous system.4

Screening tools. The primary goal of a cognitive assessment is to determine if the patient’s subjective memory complaints have objective correlates. In clinical practice, this often is done via a brief cognitive screening examination; in memory centers, this includes a more comprehensive 20 to 30 minutes of psychometric testing. Among available brief screens, the Mini-Mental Status Examination (MMSE) is the most commonly utilized, although it is limited by time and cost. The Montreal Cognitive Assessment (MoCA) is well validated in numerous languages and scaled to educational level, which provides some added benefit, especially because it has higher sensitivity for mild cognitive impairment (MCI).5 The AAN supports the use of screening tests to identify individuals with MCI who are at risk of developing dementia.6 The American Association of Family Practice and the American Geriatrics Society recommend very brief screens (eg, the Mini-Cog—a combination of three-word recall and drawing a clock) for initial screening, followed by MMSE or MoCA if the Mini-Cog result is positive.7 A summary of brief standardized screening instruments and measures of accuracy is available in the US Preventive Services Task Force (USPSTF) guidelines. Although these guidelines support the use of screening tools in clinical practice, the clinical benefit remains unclear.8 The Alzheimer’s Association suggests that assessment of cognition be required as part of an annual wellness visit for Medicare beneficiaries as part of the Patient Protection and Affordable Care Act of 2010.9

Follow-up cognitive testing. Screening tools give limited, although useful, information about clinical symptoms, but are not comprehensive assessment of cognitive function. If a patient has a typical amnestic syndrome with short-term memory difficulties and no other domains are affected, the brief screening tests may be adequate to diagnose AD. If there are atypical features, then further follow-up cognitive testing may be warranted. For example, if there are difficulties with language, the Boston Naming Test (BNT) may be helpful. If there are visuospatial difficulties, the Rey-Osterrieth Complex Figure (ROCF) test may be useful. Difficulties with executive function may be further characterized with the Trail Making A and B (oral or written) test. 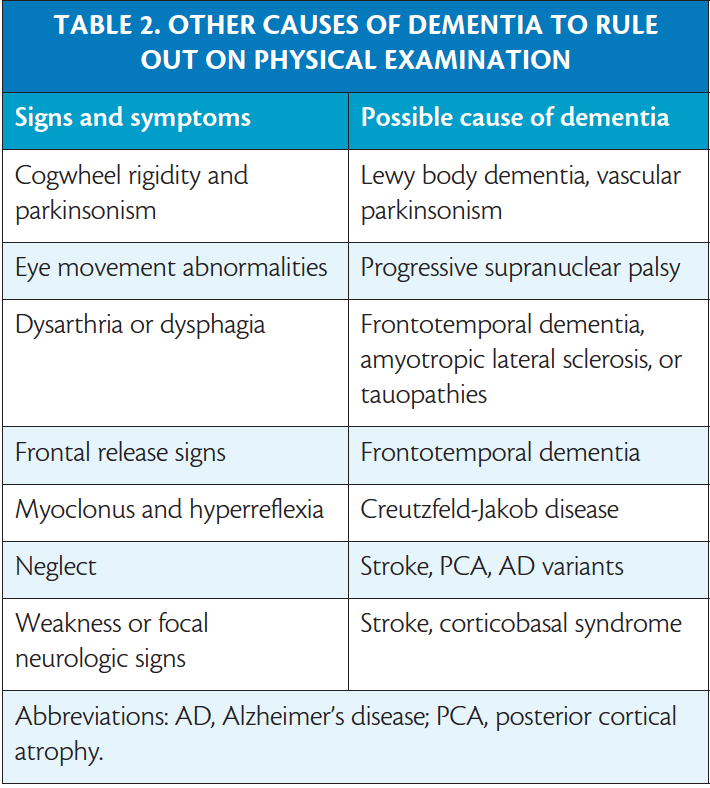 A comprehensive physical evaluation includes a detailed neurological examination with tests for other causes of dementia. Often the physical examination for patients with AD dementia is grossly normal, except for decreased ankle reflexes. If there are focal neurological abnormalities, further assessment and approach to the clinical diagnosis changes significantly and other causes must be ruled out (Table 2).

The diagnosis of AD dementia is made clinically as described. Although imaging biomarkers are increasingly being used to support a diagnosis or to make a diagnosis for the purpose of research, we do not have sufficient data to use biomarkers alone to diagnose AD outside of the research setting.

Brain MRI without contrast is appropriate to rule out structural lesions,4 including vascular disease, cortical or subcortical infarctions, subdural hemorrhage, and tumors. Brain MRI, especially 3T MRI with thin coronal slices, can also provide markers of hippocampal volume and cortical atrophy. Both may provide further prognostic information about the likelihood of progression to AD dementia. Hippocampal atrophy has the highest predictive value for progression of MCI to dementia.10 In cases where the brain MRI findings are negative or inconclusive for neurodegeneration and there is a clinical suspicion of FTD, especially in patients less than age 65 with behavioral or language symptoms, it may be useful to obtain a PET scan with or without amyloid tracer ligands.4 It must be noted, however, that although markers of amyloid pathology in the brain and CSF are available and approved by the Food and Drug Administration (FDA) for commercial use, none is currently covered by Medicare or private insurers. Another current limitation of these and other biomarkers (eg, tau imaging) is that standardized values for positive levels that translate into reliable predictors of developing AD dementia have yet to be established (see Disclosing Amyloid Status to a Person Without Cognitive Impairments).

Symptomatic treatments are not recommend for patients with MCI.6 For patients with AD dementia these drugs have been shown to provide small but significant improvement in some domains of cognition, at least temporarily, and are FDA-approved. It is useful to advise patients that the goal of symptomatic treatment is not to improve symptoms, but rather to help stabilize symptoms of functional decline, which is where these drugs have been shown to have greatest impact. The therapies available are cholinesterase inhibitors (ie, donepezil, rivastigmine, and galantamine) and an NMDA-receptor antagonist, memantine. Traditionally, cholinesterase inhibitors have been used as first-line medication, and memantine is used as an adjunct for moderate-to-severe dementia.

Trials of complementary, alternative, and traditional medicines including vitamin E, selegiline, and antioxidants require further studies.11 Trials exploring gingko,12 estrogen,13 and anti-inflammatories14 have shown no significant benefit, and these compounds are not recommended. Although high-intensity statin did not have any significant benefit in cognitive measures, it had no major side effects over 72 weeks of use.15

Treatment of Psychiatric and Behavioral Symptoms

Behavioral symptoms are common in patients with AD, interfere with caregiving, could lead to significant caregiver burden, and are a frequent reason for institutionalization. The informant should be educated about such symptoms and offered support. Graded assistance and positive reinforcement are recommended to increase functional independence11 and may help with apathy. Mild irritability and frustration is common in early stages and can be treated with selective serotonin reuptake inhibitors (SSRIs). Sertraline is generally preferred because it has a milder side effect profile and can be titrated to higher doses as needed and as tolerated. Depression can be treated by antidepressants including SSRIs.11 In later stages of AD, behavioral symptoms can become more prominent (eg, agitation, physical aggression, paranoia, hallucinations, wandering). Nonpharmacological approaches that modify the behavior or environment should be attempted.17,18 If these interventions do not control these symptoms well enough to prevent risks to patient or caregivers, it is reasonable to use pharmacological therapies.11 Based on systematic reviews, it is suggested that a trial of cholinesterase inhibitors and memantine be used before atypical antipsychotics.16-18 Because of the risk of extrapyramidal side effects, metabolic issues, and a black box warning of higher association with mortality than placebo, use of antipsychotics is off-label in AD and most appropriate for intermittent dosing. Benzodiazepines should be avoided and reserved only for occasional use as last resort.18

Healthy aging can be promoted by addressing modifiable risk factors.19 The functional impairment of AD can significantly effect medical comorbidities and vice versa. Proper geriatric care aimed at managing medical comorbidities in the context of AD is essential. Nutrition should be addressed, although there is limited evidence that supplements, appetite stimulants, or assisted feeding are helpful in late-stage AD. Rehabilitation including cognitive rehabilitation, speech therapy, and physical therapy may be tried and can be helpful in early stages but is limited as AD progresses. Behavior modification, scheduled toileting, and prompted voiding are recommended to reduce urinary incontinence.11 A checklist of minimal critical interventions for supportive care and caregiver education is available from the American Association for Geriatric Psychiatry and provides guidance on safety issues like driving, lack of supervision, environmental hazards, wandering, falls, lack of daily structured activities, and loss of decision-making capacity prompting a proactive assignment of proxy decision makers.20 Early advanced care planning can prevent futile treatment and unnecessary hospitalizations that can exacerbate delirium in patients with AD. The goals of care are guided by quality of life and patients’ caregivers’ preferences because of the limitations of a prognostic model to estimate survival times.

Current practice guidelines for clinical management of AD have been developed to tackle this complex disease and standardize its care. With the ongoing research efforts aimed at development and validation of biomarkers along with investigation of disease-modifying drug therapies, we await incorporation of these into the clinical practice. Until then, the central theme of disease management is supportive care aimed at improving quality of life as per patients’ and caregivers’ preferences.

Keenan Dobbyn is a super sibling caregiver to his brother Connor, who has Sanfilippo syndrome.
Therapeutic Hypothermia Effects on Brain Development