Fatigue in Patients With Multiple Sclerosis

Treating fatigue in patients with multiple sclerosis may significantly improve quality of life and requires a high index of suspicion for coexisting sleep disorders.

Fatigue is a ubiquitous and often under-recognized symptom in patients with multiple sclerosis (MS). Prevalence estimates for fatigue are as high as 70% to 90% in unselected patients with MS, and it may be the leading cause of disability in patients with mild or early relapsing-remitting MS.1-3 Fatigue is a complex and multifaceted symptom that is poorly understood despite extensive study. Patients with MS may have differing definitions for fatigue. Sleep disorders are more common in patients with MS compared to the general population, including obstructive sleep apnea (OSA), central sleep apnea, and restless legs syndrome (RLS) and resulting from conditions such as neuropathic pain, nocturnal leg spasms, and others. Therapy for MS-related fatigue may be partially successful, but many patients continue to have significant fatigue despite treatment. Chronic sleep deprivation can lead to worsening fatigue, depression, cognitive inefficiency, and fibromyalgia symptoms. Treatment of sleep disorders may significantly improve quality of life but requires a high index of suspicion for the presence of coexisting sleep disorders along with MS-related fatigue. In this article, we address differences between primary and secondary fatigue in patients with MS, possible physiologic mechanisms of MS-related fatigue, nonpharmacologic and pharmacologic therapy for fatigue, recognition and diagnosis of coexisting sleep disorders, and therapies to treat sleep disorders.

Fatigue in Patients With Multiple Sclerosis

Clinically, fatigue has been divided into primary fatigue, a part of the MS disease process and secondary fatigue, in which fatigue is a complication of MS (eg, caused by spasticity interfering with sleep) (Figure). 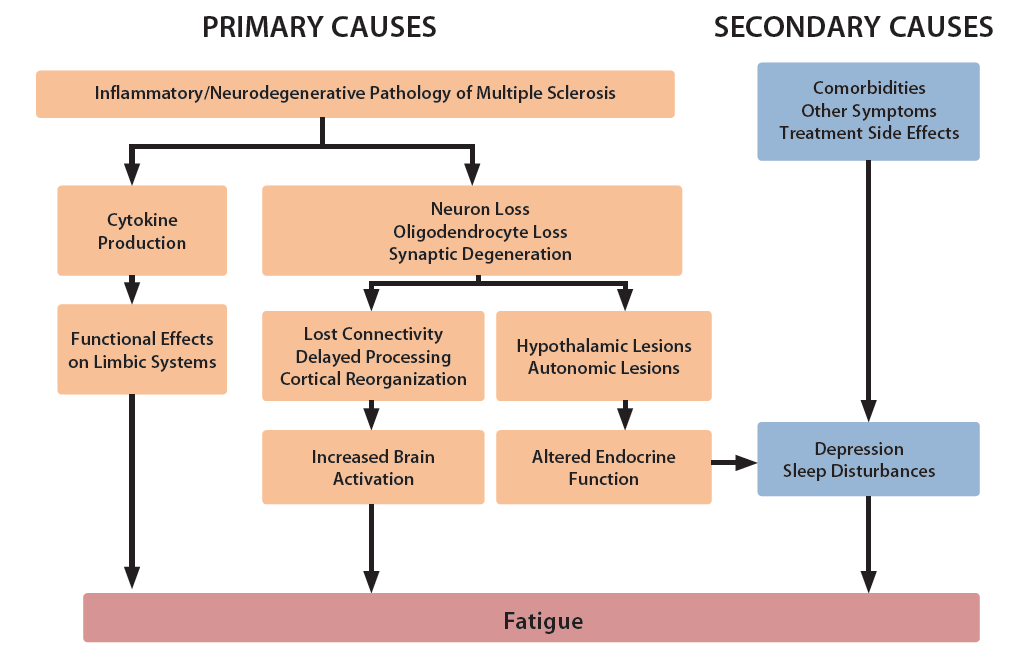 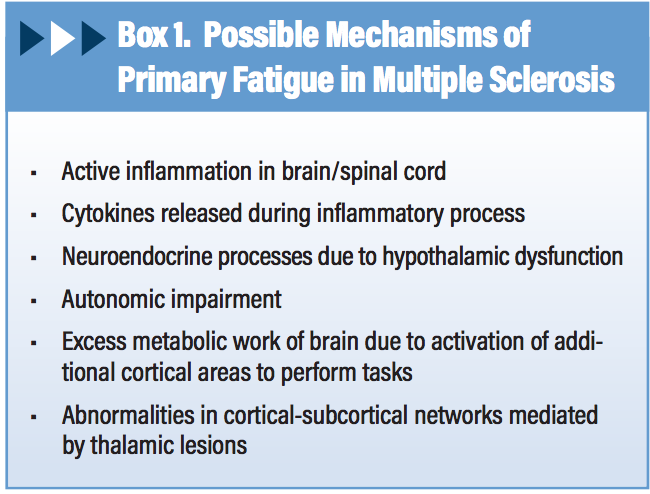 Primary fatigue is fatigue related to the MS disease process. Possible pathophysiologic mechanisms include brain inflammation, cytokine effects, neuroendocrine abnormalities, brain structural changes, or autonomic dysfunction (Box 1).4,5 Fatigue may be present primarily during relapses and improve upon recovery from the relapse, providing indirect evidence that brain inflammatory activity may be an important cause of fatigue. Some studies have shown correlations between fatigue severity and inflammatory disease activity, while others have not.6 MS relapses were associated with increased fatigue and decreased health-related quality of life in a post hoc analysis of 2 pivotal phase 3 studies of teriflunomide.7 Initiation of natalizumab therapy decreased fatigue in the open-label, nonblinded TYNERGY study.8 In this study, the Fatigue Scale for Motor and Cognitive functions (FSMC) was used as the primary outcome measure, and motor, cognitive, and total FSMC scores declined significantly over 1 year of treatment (P < .0001). Conclusions of this study are limited, however, because it was not blinded or randomized and contained no control group. Cytokines interferon-γ and interferon-β cause fatigue when administered therapeutically. Subtle autonomic abnormalities have been reported in patients with MS, and some of these (eg, orthostatic intolerance) could be substrates for fatigue.9,10 Secondary fatigue is defined as fatigue due to complications of MS including sleep abnormalities, depression, inactivity and deconditioning, and other factors (Box 2). Treatment of secondary fatigue is directed toward the inciting factors. 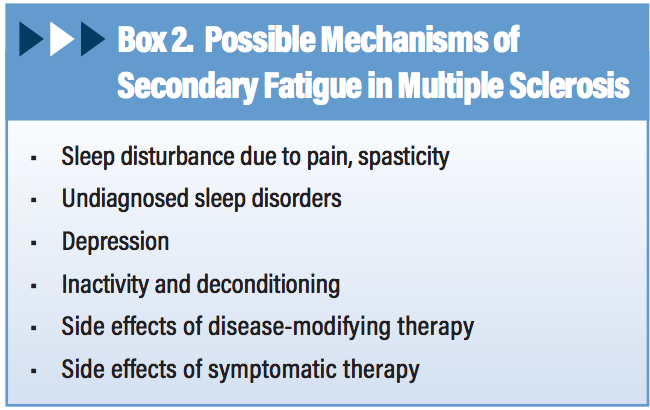 Nonpharmacologic approaches to MS-related fatigue include energy-conservation techniques, exercise, attention to sleep hygiene, and napping. Energy-conservation techniques are often prescribed through consultation with occupational therapy. Most, but not all, studies suggest moderate graded aerobic exercise has benefit in MS-related fatigue.11 The Cochrane systematic review of exercise in MS showed at least a modest benefit in MS fatigue, in contrast to many of the medications used to treat MS fatigue.12 Sleep hygiene may be helpful to maximize sleep efficiency and thereby avoid chronic sleep deprivation. Many patients with MS use complementary and alternative medicine (CAM) for MS-related fatigue, but the efficacy of supplements and most other CAM therapies is not proven. Prokarin, a proprietary blend of histamine and caffeine applied via skin patch, in a small double-blind pilot study of 22 patients improved fatigue symptoms compared to placebo as measured by the Modified Fatigue Impact Scale (MFIS).13 Low-dose naltrexone had a positive effect on quality-of-life measures in a single-center pilot study.14 Data for other CAM therapies are nonexistent.

A number of pharmacologic therapies have been studied for treatment of fatigue in patients with MS. Most of these studies had small sample sizes, short treatment duration, and significant placebo effects. As a result, there are currently no Food and Drug Administration (FDA)-approved therapies for MS-related fatigue, and all therapies are used off-label.

Amantadine. Amantadine was the first therapy that showed efficacy, albeit modest, for treatment of fatigue in patients with MS. Amantadine produced small but statistically significant improvements in 4 out of 7 domains that included overall energy level, problem-solving, concentration, and sense of well-being based on subjects' daily diary ratings recorded during a randomized, double-blind, placebo-controlled trial.15 In a double-blind, placebo-controlled, randomized parallel-group trial comparing amantadine, pemoline, and placebo, amantadine produced a significant (P = .04) reduction in fatigue based on the MS Fatigue Scale compared to placebo, and pemoline did not produce a statistically significant effect.16 Neither agent produced a significant reduction in the Fatigue Severity Scale (FSS), the other primary outcome measure in the study. At the end of the trial, 79% of patients treated with amantadine, 52% of patients treated with placebo, and 32% of patients treated with pemoline favored their assigned therapy over no therapy. Pemoline has since been removed from the market because of safety concerns.

Modafanil and armodafinil. Modafanil and armodafinil are novel compounds approved for treatment of patients with narcolepsy and excessive daytime sleepiness associated with shift work and OSA. A study of 121 patients with MS randomized subjects 1:1 to modafinil 200 mg daily or matching placebo for 8 weeks and included patients with an FSS score ≥4.0 and an Expanded Disability Status Scale score (EDSS) <7.0. Patients treated with modafinil had no difference in the primary outcome measure, the FSS, compared to those treated with placebo after 8 weeks.17 Cognitive performance was also not improved consistently. In a phase 2 single-blind randomized crossover design study, 72 patients with MS-related fatigue were started on treatment with placebo for 2 weeks, then modafinil 200 mg daily for 2 weeks, then modafinil 400 mg daily for 2 weeks, and finally placebo for 3 weeks.18 Patients had improvements in the FSS and MFIS scores during the modafinil 200-mg daily phase, but not in the modafinil 400-mg daily phase of the study. Another randomized, double-blind, placebo-controlled multicenter study evaluated 115 patients with MS-related fatigue who were randomized to placebo or escalating doses of modafinil starting at 200 mg daily. After 5 weeks, there was no difference in the MFIS between patients treated with modafinil and those given placebo.19

Dalfampridine. Dalfampridine (4-aminopyridine) is approved for treatment of ambulation difficulties and is reported anecdotally to help MS-related fatigue. In a randomized, double-blind, placebo-controlled crossover study, there was no difference in FSS scores, cognitive measures, or EDSS in 54 patients with progressive MS who were treated with immediate-release dalfampridine.20 There are no other randomized controlled trials of dalfampridine focusing on fatigue outcome measures completed to date.

Using a crossover design, a small pilot study with 30 subjects showed that 1,300 mg of aspirin (ASA) given daily improved fatigue in patients with MS, as measured by the MFIS, compared to placebo.21 The same investigators conducted a larger randomized, double-blind, placebo-controlled, parallel-group design comparing treatment with 1300 mg of ASA per day, 162 mg of ASA per day, or placebo. Interim analysis indicated no significant difference between ASA and placebo in the primary outcome measure, the MFIS, and the study was terminated early.22

Sleep disturbances are underreported and underrecognized in patients with MS and may be a contributing factor to MS-related fatigue. Reviews have shown higher incidences of sleep disturbances reported in patients with MS including prevalence of narcolepsy ranging from 0% to 1.6%, RLS from 14.4% to 57.5%, REM sleep behavior disorder from 2.22% to 3.2%, and OSA from 7.14% to 58.1%.23-29 (See also Sleep Disorders in Patients With Multiple Sclerosis p 47). Referral bias, incomplete ascertainment, and other biases may influence these rates. Anxiety, reduced motivation, and mental fatigue are associated with poor sleep quality in patients with shorter MS duration, and pain, depression, and mental fatigue are associated with poor sleep quality in those with longer disease duration.26 Symptomatic narcolepsy occurs in both patients with MS and with neuromyelitis optica spectrum disorder (NMOSD) and correlates with hypothalamic lesions seen on MRI. The International Revised Diagnostic Criteria for NMOSD includes symptomatic narcolepsy as a core clinical feature of NMOSD.30 Painful nocturnal spasms, chronic neurogenic pain, and insomnia from drugs used to combat MS-related fatigue or polypharmacy are other causes of secondary sleep disturbances in patients with MS.

Treatment of sleep disorders in patients with MS is the same as treatment of these disorders in the general population. Nasal continuous positive airway pressure (CPAP) is the mainstay of treatment for OSA. Dopamine agonists, gabapentin, and narcotic analgesics are used to treat patients with RLS, and these patients need iron supplementation if their serum ferritin level is <45 mg/dL. Rotating medications between drug classes may be helpful as reduction-in-treatment effects seem to occur over the long term with single agents. Carbidopa/levodopa combinations may lead to augmentation problems in patients with RLS and should be avoided whenever possible. Clonazepam may be useful for treating patients with REM sleep behavior disorder. Weight loss and exercise are important adjunctive treatments for patients with sleep disorders.

Fatigue is among the most disabling symptoms of MS and requires a multicomponent approach. This includes identifying and treating factors leading to secondary fatigue, as well and pharmacologic and nonpharmacologic treatments of primary fatigue.

New Drug Application for Ponesimod Was Submitted to FDA