Data from three randomized clinical trials offer promising results for the use of patent foramen ovale closure in the treatment of cryptogenic stroke.

Article dual published with permission from the January/February 2018 edition of Cardiac Interventions Today.

Device-mediated patent foramen ovale (PFO) closure to prevent recurrent ischemic strokes has been controversial for more than a decade. After the initial approval of two PFO closure devices by the US Food and Drug Administration (FDA) in 2002 using the humanitarian device exemption (HDE) pathway, there was a rapid growth in the number of procedures being performed. The HDE approval was withdrawn in 2006 because there was a larger number of patients with the condition, which exceeded the number allowed for HDE approval. Device companies then focused on randomized trials in patients aged between 18 and 60 years who had a cryptogenic stroke and were found to have a PFO.

Randomized trials of PFO closure plus antiplatelet therapy versus medical therapy alone emerged as the only pathway for evidence to be generated to prove or disprove the value of PFO closure to prevent recurrent ischemic strokes in this well-defined patient population. Calls for randomized trials of PFO closure versus medical therapy also came from professional societies, but enrollment in these trials was slow, and retention was difficult, in part, because of the ongoing and widespread use of a variety of FDA-approved devices for other defects that could be used for PFO closure. Insurance companies in the United States started to more vigorously deny coverage for PFO closure because there was no approved PFO closure device available because of the lack of convincing evidence.

Subsequently, the initial enthusiasm for closure was muted by the publications of three randomized trials (CLOSURE, PC, and RESPECT) in 2012 and 2013 that failed to meet their primary endpoints.1-3 However, the quest for additional evidence did not wane because there was a belief that PFO closure did have a benefit; data from the RESPECT trial offered strong suggestions of a benefit from PFO closure, and patients continued to demand answers. In fact, the value of PFO closure could only be proven with longer-term follow-up, improved patient selection, comparison with antiplatelet therapy, and increasing the sensitivity of detecting recurrent strokes with brain imaging.

Beginning in 2015, additional evidence started to develop with RESPECT reporting longer-term results that showed increasing benefit of PFO closure over time. In 2017, two new trials (CLOSE and REDUCE) reported clearly positive results showing superior reduction in recurrent stroke rates with PFO closure. In September 2017, all three studies were published, with an accompanying editorial claiming a tipping point had been achieved.4-7

RESPECT was the largest trial in the field with 980 patients enrolled and has the longest follow-up with a median of 5.9 years. It started enrolling patients in 2003, nearly 5 years earlier than the CLOSE and REDUCE trials, which both began enrollment in 2008. Therefore, RESPECT suffered a greater impact from widespread off-label PFO closure use producing slow enrollment and problematic retention of many patients. Despite this, the long-term results of RESPECT were compelling in demonstrating the reduced risk of recurrent stroke with PFO closure using the Amplatzer PFO Occluder (Abbott Vascular, formerly St. Jude Medical). Recurrent ischemic stroke occurred in 18 patients in the PFO closure group and in 28 patients in the medical therapy group. The recurrent stroke rate in the intention-to-treat population was 0.58 events per 100 patient-years in the device arm and 1.07 events per 100 patient-years in the medical arm (hazard ratio [HR] with PFO closure vs medical therapy, 0.55; 95% confidence interval [CI], 0.31–0.999; P = .046). PFO closure cannot prevent strokes from other causes; therefore, an analysis of only recurrent ischemic stroke of undetermined cause revealed another significant difference in these strokes occurring in 10 patients in the PFO closure group versus 23 patients in the medical-therapy group (HR, 0.38; 95% CI, 0.18–0.79; P = .007). An additional analysis of patients who were older than 60 years further strengthened the case for selective PFO closure and demonstrated that as patients aged, recurrent strokes in both arms were mostly due to non-PFO causes of stroke.

REDUCE was a trial that initially used the Helex (Gore & Associates) and subsequently the Cardioform Septal Occluder (Gore & Associates) devices and compared those who had device closure plus long-term antiplatelet therapy with those receiving only antiplatelet therapy. REDUCE enrolled 664 patients with a median follow-up of 3.2 years. It also used pre- and postclosure magnetic resonance studies to detect recurrent brain infarcts that may or may not be associated with a clinically recognized event. The benefit of PFO closure was clearly demonstrated with recurrent ischemic strokes occurring in 1.4% of patients in the device group (6/441) and in 5.4% of patients in the antiplatelet-only group (12/223; HR, 0.23; 95% CI, 0.09–0.62; P = .002). Brain MRI detected clinically silent events in an additional 24 patients, but the silent infarcts were not less frequent in the device group.

CLOSE had a more complex, three-arm design with a PFO closure plus a long-term antiplatelet arm that was compared with antiplatelet therapy alone. An anticoagulation arm was compared with the antiplatelet arm but unfortunately was underpowered. CLOSE enrolled a total of 663 patients who had a mean follow-up of 5.3 years. Significantly, CLOSE required all patients enrolled in the study to have one of two PFO features postulated to be higher risk for recurrent events: atrial septal aneurysm and large shunt (> 30 bubbles in left atrium).

A variety of devices were allowed, but 53% of patients were treated with the Amplatzer PFO Occluder. The major comparison of interest was PFO closure versus antiplatelet therapy. Strikingly, no strokes occurred in the PFO closure arm of 238 patients, whereas 14 recurrent strokes occurred in the 235 patients in the antiplatelet-only group (HR, 0.03; 95% CI, 0–0.26; P < .001).

The similarities among the three trials were substantial, such that there is now a consistency of the evidence showing that PFO closure does reduce the risk of recurrent ischemic strokes, and the risks related to the procedure and device are small and mostly transient. Serious adverse events due to the procedure or device were infrequent (4.4% in RESPECT, 3.9% in REDUCE, and 5.9% in CLOSE). Atrial fibrillation was more common in the device arm of REDUCE (6.6%) than RESPECT (4.4%) and CLOSE (4.6%), but no conclusions can be made regarding device differences without a randomized comparison and clarity between those with transient periprocedure atrial fibrillation versus those having long-term issues. Longer-term monitoring will need to be done before and after device closure to better understand this issue. Atrial fibrillation did emerge in the medical arm of all three trials and, in RESPECT, two patients in the medical arm had recurrent strokes related to atrial fibrillation.

A comparison of the three trials also helps us to understand how the results of the three trials had some differences related to variations in trial design, patient characteristics, and trial execution. For the clinical community, there are many additional lessons that were learned with each trial (Table 1). 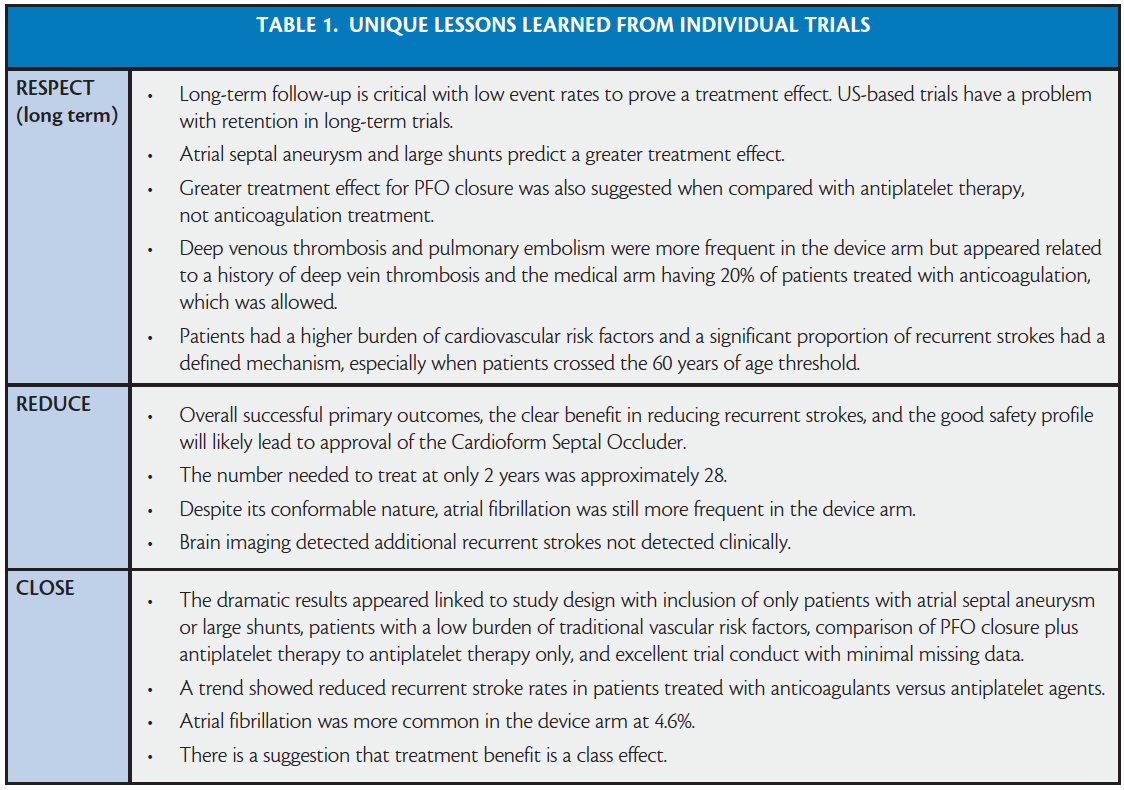 Impact on Clinical Practice and Next Steps

The new evidence on the benefit of PFO closure is rapidly reaching clinicians and patients who have needed greater clarity on the expected benefits and safety of PFO closure versus medical therapy alone. The rational dispersion of new technology and the adaptation of best practices now need to be guided by professional societies. A central theme is that the evaluation taking place after the index stroke needs to be a joint effort between a neurologist and a cardiologist. Patients need to know the evidence, the specifics of their situation, and then define their treatment preferences. Decision aids in this area of medicine are lacking and would be very useful.

PFO closure is a targeted therapy to prevent strokes that are related to presumed paradoxical embolism. Strokes from other mechanisms emerge as these patients age. PFO closure should be one component of a comprehensive secondary prevention strategy that needs to be tailored to each patient.

Currently, only the Amplatzer PFO Occluder has FDA approval. The Cardioform Septal Occluder is under review for potential FDA approval and may add additional value in certain patient populations. Insurance companies have started to revise policies since FDA approval of the Amplatzer PFO Occluder. This process is likely to now accelerate, and the field will most likely grow with the publication of these three randomized trials. Updating stroke guidelines and practice advisories is also necessary because the last version of these documents advised against selective PFO closure in cryptogenic stroke.

Although progress has been made with PFO closure, there is much more to learn. When to deviate from the carefully selected patient populations studied in these trials of PFO closure needs to be defined. These and other questions will require clinicians and patients to have open discussions about what is now evidence based and established in this challenging field versus what questions have not been answered and require further discussion, clinical judgment, and the quest for new scientific evidence.

John D. Carroll, MD
Professor of Medicine-Cardiology
Director of Interventional Cardiology
Co-Director of Cardiac and Vascular Center
University of Colorado
Aurora, Colorado
Disclosures: Served on the Steering Committee of the RESPECT trial and received compensation for services related to that role from the study sponsors (AGA Medical, St. Jude Medical, and Abbott Vascular).

Get Ahead of Stroke Campaign

The Approval of PFO Closure in the United States