Reader Response to: Migraine and Other Neurologic Conditions in Retired NFL Players

We read with great interest Randolph Evans’ recent article in Practical Neurology.1 Dr. Evans stated that his cohort was a “biased, nonrandom sample seen as part of an evaluation for possible compensation and are probably not representative of all retired NFL players,“ and that further studies would be of “high interest.”

We believe that your readers would be interested in the results of an earlier study reported by our group in which a convenience sample of 45 retired NFL players underwent comprehensive neurologic, neuropsychologic and neuro-radiologic evaluations.2 A comparison of the results seen in these two studies is given in the Table, where a number of similarities and differences can be seen. Our cohort was recruited randomly from a list of retired players provided by the NFL Players Association as part of a study. Our evaluations were performed between 2007 and 2009, before there was a legal settlement between the NFL and retired players (effective date January 7, 2017). In contrast, Evans’ group was part of evaluating players for possible financial compensation by the NFL. Presumably, Evans’ evaluations were all performed in 2017. 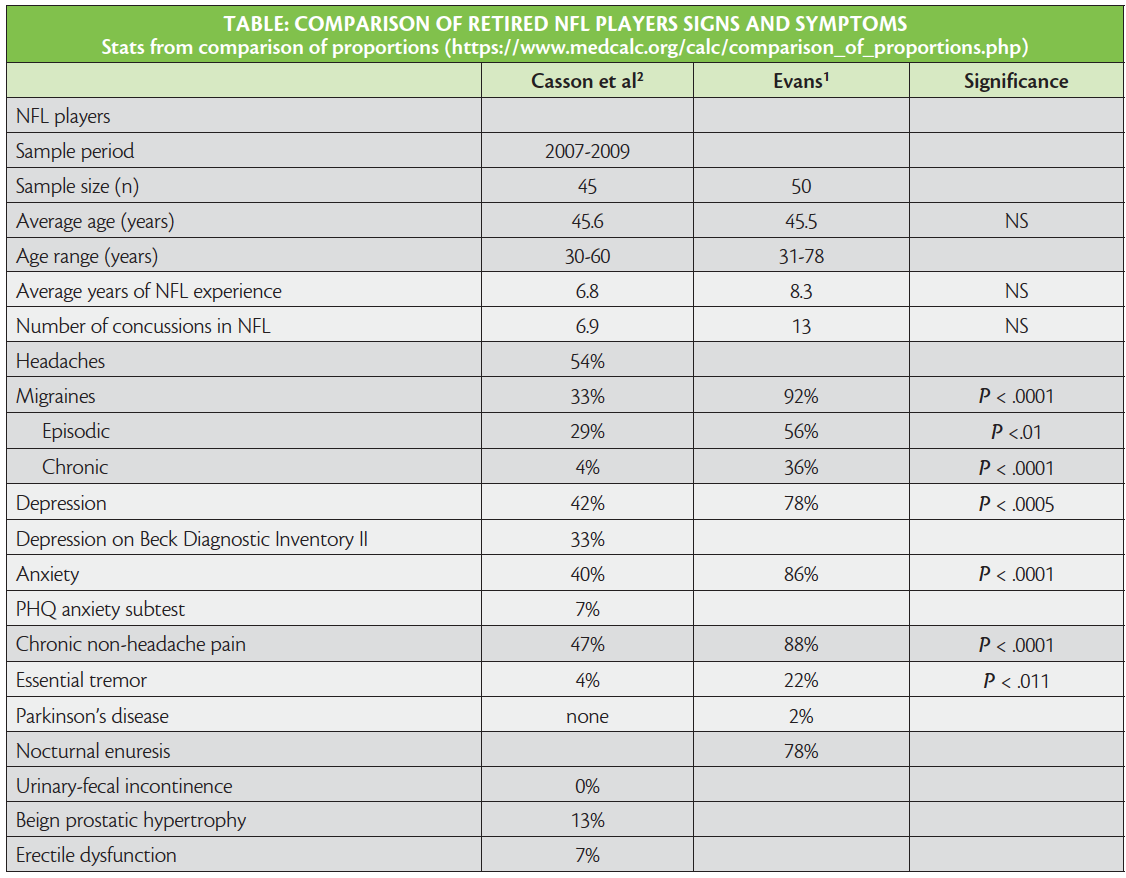 Evans reported that 92% of his cohort had migraines compared to 33% in our sample
(P < .0001). Our sample had a significantly lower rate of reported migraines. Evans reported that 78% of his cohort reported nocturnal enuresis on the Clinical Dementia Rating (CDR) worksheet. We did not utilize the CDR in our study. However, as part of the comprehensive neurologic history obtained from every subject, we asked if the subject ever experienced urinary or fecal incontinence. In addition, as part of the comprehensive review of systems, which was part of the medical history obtained from each subject, we specifically asked about any urological symptoms or conditions (see Table). None of our subjects reported urinary incontinence.

Despite similar average ages and similar exposures to NFL football, there are statistically significant differences in the prevalence of migraine headaches, depression, anxiety, chronic non-headache pain, essential tremor, and nocturnal enuresis between our two cohorts. Whether these differences are related to the different settings under which the subjects came to be evaluated (ie randomly recruited as part of a study vs self-referred for evaluation for possible financial compensation under the terms of a legal settlement) is not known. We agree with Evans that further clinical studies of retired NFL players are needed.

I appreciate the comments and table from Drs. Casson and Viano and concur both studies reported results from convenience samples. There are a number of methodologic issues with both studies, as discussed in the articles.

We all agree that further study of a randomized sample of the approximately 22,000 retired NFL players would be of great interest. Given their prior study and work with the NFL and the NFL Players Association, Drs. Casson and Viano in cooperation with a neuropsychologist may wish to consider such a study as discussed in my article. Perhaps more feasibly, you might consider a study with permission from all parties of the approximately 20,000 players in the Baseline Assessment Program and Monetary Award Fund program who are being evaluated by neurologists and neuropsychologists.

Opportunities for Patients Arising From Practicalities of Health Care