Severe Inflammatory Response Causing Choroid Plexitis and Acute Hydrocephalus in a Patient with Hodgkin's Lymphoma: A Case Report and Review of the Literature

Hodgkin's lymphoma (HL) is a malignancy of B-lymphocytes characterized by a signature histopathology of large mononucleated Hodgkin (H) and multinucleated Reed-Sternberg (RS) cells.1 A clinicopathologic feature of HL is eosinophilia with rare instances of eosinophilic CSF pleocytosis.1Explanations for an abnormally high count of eosinophils in the CSF include: a parasitic infection, CNS HL, or a massive inflammatory response to HL.2,3 A common inflammatory response to HL manifests in the skin as eczema or pruritus.4 Approximately 30 percent of HL patients report pruritus as their only presenting symptom.4 However, there has never been a case reported before to have such an inflammatory response to HL within the brain.

Though rare, a widespread inflammatory response to Hodgkin's lymphoma in the brain masks itself as choroid plexitis and acute obstructive hydrocephalus. Physicians should develop an appropriate treatment regiment in a timely manner.

Here we present a case in which the patient presents with eosinophilic pleocytosis representing an inflammatory response to HL not only manifesting to the skin, but also within the CSF and his brain, causing choroid plexitis and obstructive hydrocephalus. 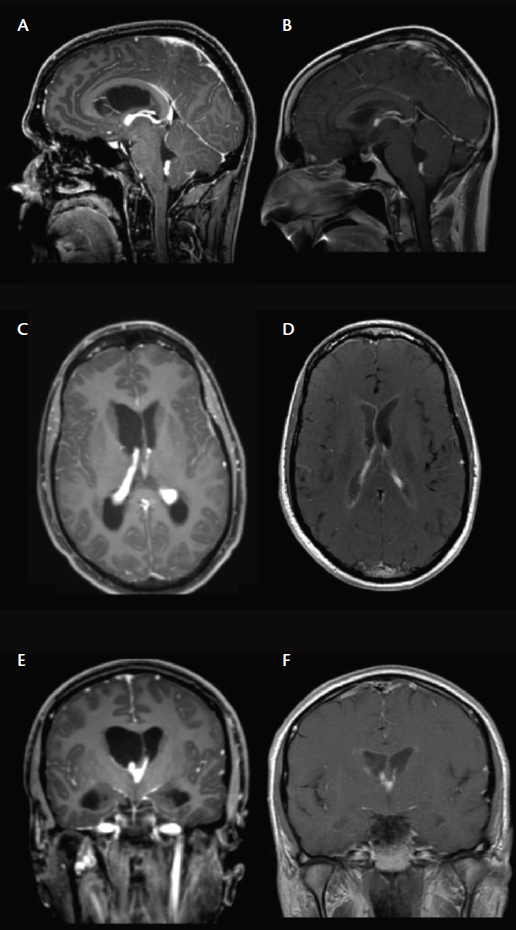 A 32-year-old man with a past medical history of eczema and presumed, but not yet confirmed scabies, presented in the ER with a six-week history of headaches and vomiting. He had an unsteady gait and irritable bowel syndrome (IBS). The patient reported to have no visual complaints and his cranial nerves were intact. A head CT revealed marked obstructive hydrocephalus and trans-ependymal flow. Magnetic resonance imaging (MRI) again demonstrated an accumulation of CSF within the lateral and third ventricles, and diffuse choroid plexus enlargement obstructing the bilateral foramen of Monro and general obstruction of CSF flow.

Over the next few days, the patient's headaches persisted and he underwent an external ventricular drain (EVD) ventriculostomy. His catheter drained yellow and heavily proteinaceous CSF(4925 mg/dL). His immediate post-procedure head CT showed marked improvement in ventricle size. The patient's CSF tested positive for IgG antibodies and negative for IgM antibodies consistent with previous exposure to the West Nile Virus (WNV). Additionally, he had a high eosinophil count (19.8 eosinophils/uL CSF). His eosinophilic CSF pleocytosis led us to believe that he either had CNS involvement of HL, a parasitic infection, or massive inflammatory response to HL. CSF screen for parasitic infections was negative. The patient's CSF analysis did not show lymphocytes in his brain, implying no direct HL disease within the brain itself. Paraneoplastic eosinophilia was also suspected due to the fact that it is known to be associated with HL and can be disguising itself as HL in the brain.

Subsequently, an ommaya reservoir was placed via a right frontal burr hole to allow for CSF removal to shrink his unresolved acute obstructive hydrocephalus and to potentially treat his CSF Hodgkin's with intrathecal methotrexate. However, his ommaya reservoir was never used because after being given intravenous (IV) high dose steroids, Solumedrol, his choroid plexitis resolved and therefore, his acute obstructive hydrocephalus. Thus, the patient was likely experiencing a massive inflammatory response to his HL that was causing choroid plexitis and acute obstructive hydrocephalus as a result. Figure 1 shows the patient's significant three-month improvement through his MRI scans. The patient has been discharged and is doing well. He has been undergoing four cycles of ABVD to treat his primary HL.

Our case demonstrates the severity of a widespread inflammatory response to HL and the importance of developing an appropriate treatment algorithm in a timely manner. Usually, HL is known to produce an inflammatory response on the skin that presents as eczema or pruritus.4 However, HL has never gone as far as to cause a severe inflammatory response in the brain masking itself as choroid plexitis and acute obstructive hydrocephalus. Our case could have gone a variety of directions, including CSF eosinophilic pleocytosis that could have been caused by paraneoplastic eosinophilia, a parasitic infection, or even CNS involvement of HL.2,3 Since no lymphocytes were found in his CSF and with a 0.02 percent incidence of CNS HL occurring, we focused on his CSF eosniphonilia being explained by paraneoplatic eosinophilia and a massive inflammatory response to HL.9 Choroid plexitis as an isolated infection is rare, so it makes sense that eosinophilic pleocytosis was the cause.10

Paraneoplastic eosinophilia rarely occurs in young patients, but if present, the first neoplastic consideration is HL.6 Steroid therapy for paraneoplastic syndromes has been found to cause rapid improvement of symptoms, such as nausea, vomiting, and headaches, and is immune-mediated, so we could not rule out paraneoplastic eosinophilia.5,9 Our patient has been responding very well to steroid therapy as his choroid plexitis and acute obstructive hydrocephalus have been resolving. His ommaya reservoir has been untouched and if his symptoms do not resolve, then he will be treated with intrathecal methotrexate. Currently, his CSF protein level have gone down to 277 mg/dL from >5000 mg/dL. We present a case that highlights the significance of considering all possibilities of the effects of HL in order to not just treat the disease, but also, treat the symptoms as they may cause neurologic complications.2,5,7,9 Ultimately, we underscore the importance of not shunting a patient immediately upon presentation of obstructive hydrocephalus, but, rather, to look into the underlying disease comprehensively. n

John A. Boockvar, MD is Director of the Brain Tumor and Pituitary/Neuroendocrine Center at Lenox Hill Hospital in Northwell, NY, where he is also Vice Chairman of the Department of Neurosurgery.

6. Rees JH. Paraneoplastic syndromes: when to suspect, how to confirm, and how to manage. J Neurol Neurosurg Psychiatry2004;75 Suppl 2:ii43-ii50.

9. Vetter M, Tzankov A, Engert A, et al. Hodgkin's lymphoma and paraneoplastic phenomena in the central nervous system: A case report and review of the literature. Case Rep Oncol2011;4(1):106-114.