Dropped head syndrome is a recognized manifestation of all of the following except:

The Correct Answer is 5: Myotonia congenita

The ability to hold the head up is made possible by at least five pairs of neck extensor muscles (NEMs). It is a function that is taken for granted until it becomes defective. An average human head weighs eight pounds. Animals have more developed neck extensors. 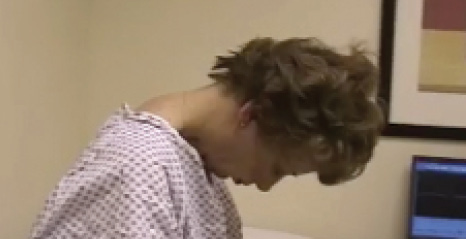 Weakness of the extensors initially leads to inability to lift the head off the pillow; therefore the patient has to turn to the side before sitting up. With progression, it becomes hard to hold the head up for a long time, and then the head drops all the time so that the patient has to hold his or her chin up to see.

Excessive strain on the neck extensors leads to posterior cervical pain, which is a common early manifestation. MRIs reveal that the affected muscles appear atrophic, edematous, and replaced by fat.

1. ALS: Weakness of the NEMs is usually accompanied by bulbar dysfunction (dysphagia, dysarthria, dyspnea) and features of upper and lower motor neuron lesions. It is progressive and diagnosis is hardly difficult. Mild CK elevation is common and widespread denervation by EMG is usually evident.

2. Myasthenia Gravis: Usually fatigable diplopia and ptosis are present. In MuSK myasthenia gravis, dysphagia, fluctuating dyasarthia and tongue weakness, and atrophy may lead to diagnostic confusion with ALS, which shows decremental response in about 30 percent of cases. Even tongue fasciculations are reported in cases with MuSK MG. Patients with dropped head syndrome should be tested for MuSK antibody titer.

3. Inflammatory myopathies: Only rarely neck extensors are affected in isolation.

6. Dystropbic myopathies, such as Facioscapulohumeral muscular dystrophy (FSHD) and dysferlinopathies.

The finding of spontaneous activity in cervical paraspinal muscles should not be over-interpreted. These changes can be secondary to the excessive strain on the weak neck extensors and not primary.

Aziz Shaibani, MD, FACP, FAAN, FANA is Director of the Nerve & Muscle Center of Texas. He is also Clinical Professor of Medicine at Baylor College of Medicine in Houston, and an Adjunct Professor of Neurology at Kansas University Medical Center in Kansas City.