From the descending aorta, the posterior intercostal arteries and lumbar arteries give off the segmental arteries. These further subdivide into radiculomedullary arteries, which enter the neural foramen where they form radicular arteries supplying the nerve roots or medullary arteries supplying the cord. Medullary arteries supply one midline anterior spinal artery (ASA) and two posteriorlateral spinal arteries (PLSA). The cervical cord is the most vascularized segment, with contributions to the ASA from one or both vertebral arteries and contributions to the PLSA from the posterior inferior cerebellar arteries (PICA). The midthoracic cord has the most tenuous arterial blood supply, having only the artery of Adamkiewicz as the dominant segmental artery supplying thoracolumbar spinal cord. This artery enters between T5 and L2 in 85 percent of cases and from the left side in 80 percent of cases. The conus and cauda equina often have median and lateral sacral arteries contributing to the blood supply.

A 62-year-old male with a history of diabetes mellitus and peripheral vascular disease presented with sudden, transient difficulty walking lasting for 30 minutes. He was evaluated in the emergency room for peripheral arterial disease. After imaging of the spine revealed no focal abnormalities, he was sent home. The following day, he noticed he did not feel a cup of hot coffee on his lap. He went to the emergency department again, and over one hour, he progressively developed paraplegia and bladder distension. His MRI of the lumbar spine at that time demonstrated spinal cord infarction from the T12-L1 level to the conus tip at L2 associated with a L1 vertebral body infarction (Figure 1).

Anything with a sudden, acute onset—whether it’s in the brain or spine—is worrisome for ischemia. Most patients with cord infarct develop symptoms quickly, with a maximal symptomatology reached within 12 hours for 50 percent of patients and within 72 hours for most patients.1 Patients with cord infarcts may be incorrectly classified as musculoskeletal by the emergency department because these patients may also present with back pain and spasms typically at the level of infarct. Back pain often accompanies spinal cord ischemia and has been reported in as many as 70 percent of patients.1 Initial negative imaging in this patient’s case is consistent with a spinal transient ischemic attack. 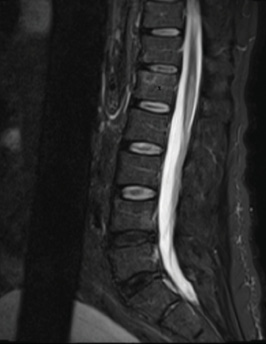 The most common vascular distribution involved is the anterior spinal artery (ASA). Anterior spinal artery syndrome infarcts typically presents as a bilateral loss of motor function and pain/temperature sensation, with relative sparing of proprioception and vibratory senses (dorsal columns being in the posterior segment of the cord) below the level of the lesion. Autonomic dysfunction may be present and can manifest as hypotension, sexual dysfunction, and/or bowel and bladder dysfunction. If the lesion is in the rostral cervical cord, respiration compromise can occur.3

If there is high suspicion for a cord infarct, then one would acquire MRI with spin-echo T2-weighted, short-tau inversion recovery (STIR) and diffusion-weighted imaging (DWI) sequences. Typically, there would be a longitudinally extensive intramedullary cord lesion on the sagittal sequence. Axial imaging is essential to differentiate among infarct, tumor, and demyelination.

Aside from looking for cord T2 hyperintensity, the vertebral bodies should be closely scrutinized for bone infarct. There is a shared blood supply between the cord and vertebral body including the aorta, segmental arteries, and branch arteries. The vertebral bodies are dually supplied by the anterior and posterior central branch arteries. The T2 STIR sequence is essential for detection of associated bone infarcts. On the other hand, the transverse process, spine process, and lamina have a different vascular supply, so if they are involved, one should consider a non-ischemic process in the differential diagnosis.

Post-contrast imaging with gadolinium-based agents is not directly helpful for detection of acute spinal cord infarct as there is no obvious enhancement. It can be helpful to rule out other etiologies (tumor, infection/inflammation, or active demyelination). In the subacute phase (days to weeks after injury), there may be faint enhancement secondary to blood-cord barrier breakdown. The degree of enhancement and secondary clues such as a mass effect can help distinguish from spinal cord infarct from other etiologies such as tumor. On long-term follow-up imaging, cord myelomalacia may occur in the region of the previously infarcted cord.

Diffusion weighted imaging, while perfected in imaging of stroke in the brain, remains a technical challenge in the spine. This is largely due to physiological CSF flow induced artifact, the need for strong gradients, and the size of the spinal cord. Both 1.5 and 3T MRI systems are adequate for detection of cord infarct, but 3T is superior in overall image quality including the ability to obtain high quality diffusion weighted sequences.

A 73-year-old female first presented with right-sided arm and leg weakness. It was acute in onset, and non-progressive. Her imaging suggested myelopathic signal in her lower cervical spine, so a surgical decompression and fusion (C3-C7) was performed. Her weakness improved a bit after inpatient rehabilitation. Six months later, she presented with worsened bilateral arm and leg weakness over the course of one week. Repeat imaging on the cervical, thoracic, and lumbar spine shows extensive intramedullary cord signal abnormality concerning for cord infarct. 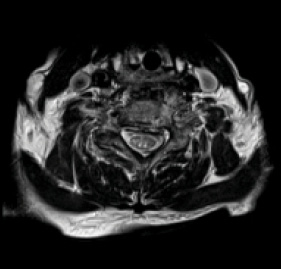 Although the most common causes for spinal cord infarct is atheromatous plaque, this case highlights the possibility of degenerative disc disease and spondylosis contributing to cord infarct. In this case, the chronic compressive myelopathy may result in a venous infarction. Other venous pathologies include arteriovenous fistulas which first presents with vasogenic edema but may subsequently result in cord infarct if there is sufficient long-standing congestion. Epidural abscess can lead to epidural venous thrombosis with secondary cord infarct. Finally, patients with underlying coagulopathies can be susceptible to infarcts of venous origin.

Imaging misreads can occur doing the acute phase of infarct where there may be substantial vasogenic edema associated with the cytotoxic edema (Figure 3). The vasogenic edema may mimic cord expansion which may lead the radiologist to suggest a mass lesion. It is key to provide the radiologist with the tempo of clinical symptoms as tumors are unlikely to present with an acute deficit. Follow-up imaging was important as it demonstrated decreased edema and resolution of cord expansion (Figure 3).

A 33-year-old gentleman visiting from Germany developed acute onset paraplegia from T6 downward. Given his young age, the initial concern was for transverse myelitis, but the very acute presentation was atypical. Further questioning revealed that patient had been surfing for the very first time and continuously “wiped” out and got back onto the surfboard. There was no single severe injury. He was admitted to neuro-intensive care for blood pressure augmentation. Patient improved on his own over the course of three days and was eventually discharged under the care of his fiancée. He was still in a wheelchair at discharge.

• Similar to brain infarcts, any abrupt symptoms that localize to the spinal cord, think of a vascular etiology.

• Spinal cord infarcts can be arterial or venous.

• ASA syndrome is the most common presentation.

• Patients frequently present with back pain which is often misdiagnosed as a musculoskeletal disorder.

• Key MRI sequences for detection of cord infarct include: spin-echo T2 weighted sequence in the sagittal/axial planes and DWI. STIR can be useful in evaluation of associated bone infarcts.

• “Owl’s eyes” on imaging is almost pathognomonic for cord infarct.

• Imaging pitfall can occur doing the acute phase of infarct where there may be substantial vasogenic edema associated with the cytotoxic edema mimicking a mass lesion.

This is an unusual case of spinal cord infarct, namely surfer’s myelopathy, which was coined fairly recently in 2004 by Thompson et al.4 This is a syndrome most commonly found in novice surfers who are young and otherwise healthy who acutely develop back pain and progressive neurological symptoms within hours. In fact, like our patient, many of the published case series have reported that these patients were trying surfing for the first time on vacation. Freedman, et al.5 propose underlying congenital vascular anomalies, such as absence/underdevelopment of the artery of Adamkiewicz, as a predisposing factor for hypoperfusion. Another theory is that prolonged prone hyperextension that is typical of novice surfers (who likely have underdeveloped back muscles) while paddling out disrupts the radicular vessels, which can compromise flow.

Like other forms of spinal cord infarct, an anterior spinal artery syndrome develops with acute motor symptoms occurring often halfway into the surf lesson with maximal neurological deficits at time of admission to the hospital including associated paresthesias. If motor function is preserved, chance of recovery can be excellent. However, in patients with complete motor deficits at time of presentation, long-term prognosis is poor.

MRI reveals T2 hyperintensity in the central portion of the spinal cord (i.e., the watershed location in the axial plane for the spinal cord) and in a “pencil-like” longitudinal extension on sagittal images with cord swelling most commonly involving midthoracic (T5-10) level to the conus. The cervical cord is not involved which lends to credence to the theory of “prolonged hyperextension in the prone position” as a biomechanical explanation for surfer’s myelopathy. In this position, the thoracic cord is under the greatest degree of mechanical pressure, while the patient’s neck is unrestricted as the surfer paddles out. Susceptibility imaging in the spine can be performed to rule out hemorrhage given the possibility the novice surfer may have suffered repetitive trauma from continuously falling and getting back on the surf board without a single severe traumatic episode. 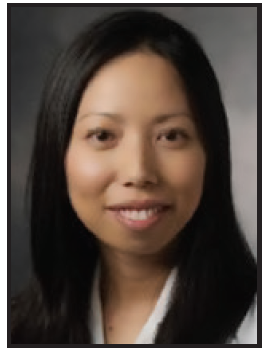 Waimei Amy Tai, MD is vascular neurologist who has served as director of the Stanford Stroke Telemedicine Program and clinical assistant professor of Neurology and Neurological Sciences, Stanford University School of Medicine. She is currently an attending neurologist for the Christiana Care Health System in Delaware. She can be reached at Waimei.a.tai@christianacare.org

The Digital Future of Cognitive Screening