Ask the Right Questions: Navigating the Complex Spectrum of AEDs

In the crowded epilepsy treatment landscape, matching the optimum regimen to each individual patient presents several challenges. We are fortunate to have such a deep pool of anti-epileptic drugs (AEDs) to choose from. However, the sheer number of available agents can also cause confusion for prescribing physicians when they have to choose the next appropriate option for a patient. Physicians have been trained to look to evidence-based studies as a guide to treatment, yet the true utility of randomized controlled trial data may be limited by the fact that such data represent idealized situations. In the real world, we often treat patients who would be excluded from clinical trials, such as those with concomitant medical conditions. Additionally, some of our patients have psychiatric disorders, while others may wish to become pregnant.

The limitations of evidence-based guidelines combined with our continually evolving knowledge of the disease itself leaves us with few definitive answers, which perhaps explains why asking the right questions is often the best path to successful management of epilepsy. By examining the variety of factors that impact epilepsy and treatment, we can whittle our options down to a select number that appear to have the most potential for benefit with the least amount of risk. 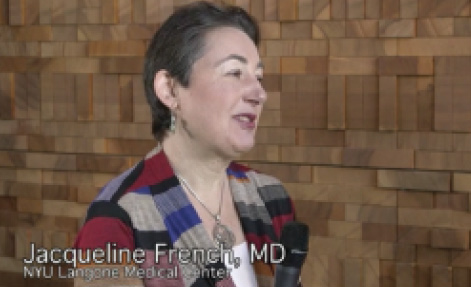 Watch Dr. French discuss the variety of factors that enter into therapeutic selection of anti-epileptic agents.

Since the massive scope of AED selection prevents me from evaluating each factor that influences therapeutic selection, this article will probe the questions that all physicians should ask when treating patients with epilepsy.

Question #1: What is the Epilepsy Syndrome?

Defining the type of epilepsy syndrome is the foundation of a sound treatment regimen and should be our foremost concern at the outset of care. While our understanding of epilepsy is constantly evolving, we should keep abreast of new changes to ensure that we are classifying it correctly. Epilepsy can currently be divided into four types, based on initial seizure localization1:

Importantly, choosing an AED should be guided first by the type of epilepsy. This can be particularly challenging for patients whose onset is unknown at time of diagnosis, i.e. in patients who present with TCC (as noted above) where it is unknown whether seizures are focal or generalized. Nevertheless, we need to recognize that there are no “one-size-fits-all” drugs. Certain agents are better suited to certain situations.

For example, while so-called “broad-spectrum agents” (e.g., lamotrigine, topiramate, levetiracetam, zonisamide, valproic acid, perampanel) can treat both focal and generalized seizures. Several AEDs, including carbamazepine, oxcarbazepine, tiagabine, as well as gabapentin/pregabalin and vigabatrin, are considered “narrow spectrum,” in that they are appropriate for focal epilepsy,2 but have the potential to either exacerbate or fail to treat generalized seizures. Broad-spectrum agents largely represent the appropriate choice in patients with genetic generalized epilepsy, as well as patients with epilepsy of unknown onset (since they may have genetic generalized epilepsy as yet undiagnosed). For some of the newer AEDs (notably lacosamide) the jury is still out on how wide spectrum it will be.

Question #2: How Well Does the Drug Work?

After ruling out some agents based on a classification of the epilepsy syndrome, we can then move on to considerations regarding drug efficacy. Unfortunately, at present there is not a lot of definitive data to support relative efficacy differences between different drugs or drug classes, either in newly diagnosed or treatment-resistant patients, which is frustrating to both patients and physicians (see Table 1). 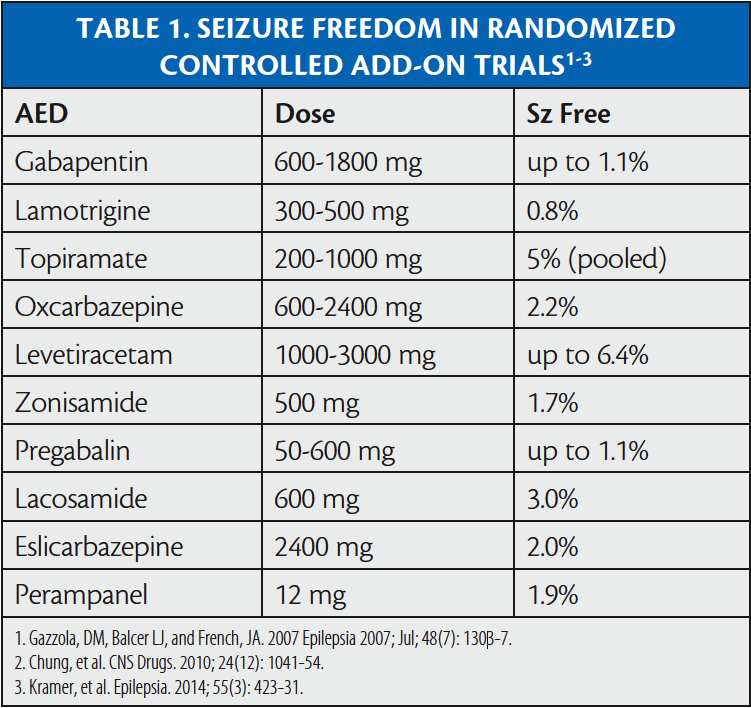 Most drugs are initially approved for use by regulatory agencies based on add-on trials in patients with treatment-resistant epilepsy, and there may be no data on effectiveness in newly diagnosed patients for some time after approval. For this reason, physicians tend to have varying levels of comfort regarding the use of AEDs as initial monotherapy. Some, for example, may be comfortable using all AEDs as initial monotherapy as soon as they are FDA approved for add-on therapy, whereas others will only use AEDs for initial monotherapy prior to their FDA approval for this indication once substantial safety data confirms the agent is relatively safe as an add-on therapy. Others will only use AEDs in monotherapy when they have received FDA approval for use in monotherapy.

Although the number is rising, still less than half of all currently available epilepsy drugs have FDA approval for use as monotherapy (see Table 2). Listed below are available monotherapy indications for second generations AEDs (visit www.fda.gov for full prescribing information on each agent): 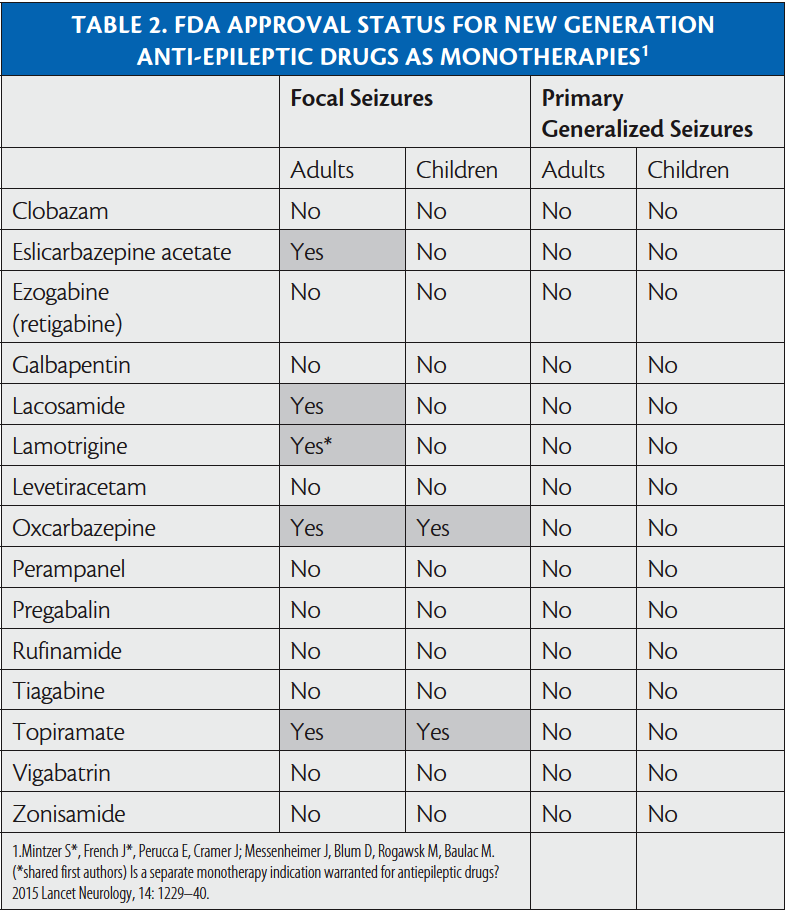 It is important to note, however, that these are not the only medications that can be used for initial monotherapy. One good example is levetiracetam, a commonly used drug for newly diagnosed epilepsy, that does not have FDA approval for monotherapy use. One way to determine if drugs are appropriate for use in newly diagnosed patients is to use the head-to-head studies that are performed in Europe for regulatory approval by the European Medicines Agency (EMA). These studies enroll patients with newly diagnosed epilepsy and compare a “standard” drug (usually carbamazepine) to the “new” drug, to see if rates of seizure freedom are equivalent. Since these studies have produced some surprises, it is prudent to wait for this type of head-to-head study to be completed before prescribing a new drug to the typical new-onset patient with focal seizures. (See Table 3 for a summary of drugs for which such a study has or has not been completed, and whether equivalence has been demonstrated.) 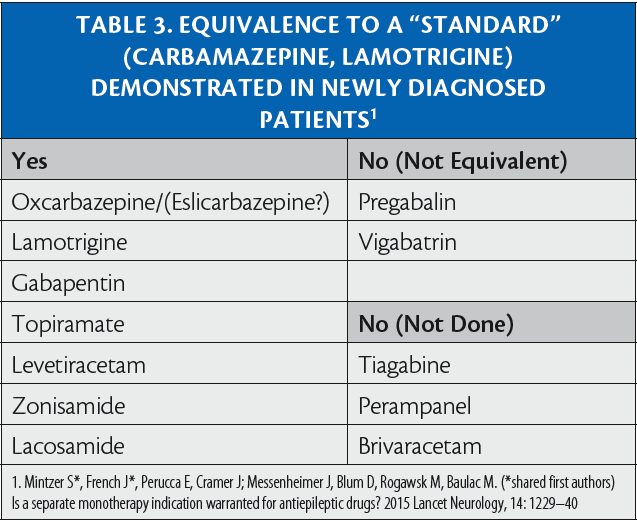 Question #3: What Are The Adverse Reactions Associated With The Drug?

Considering side effects when selecting an AED helps to avoid potential issues in advance. Among the most common of these are dose-related side effects, which may occur at any dose but likely increase as the dose rises. They may also occur during titration but then abate. An AED may cause dose-related side effects with combination therapy, whereas these effects would not be present with that AED prescribed alone. This often happens when combining agents that act on sodium channels, such as carbamazepine, phenytoin, oxcarbazepine, lamotrigine, and lacosamide. If the last AED added is providing seizure relief, but side effects emerge, removing one of the background drugs can often be just as effective at eliminating the side effects as removing the drug that seemed to cause the problem.

Representing another category of side effects are those that are non-dose-related, in which risks may be greater in certain populations than others. For example, elderly patients on diuretics are at greater risk of hyponatremia, so it is reasonable to avoid drugs that cause this problem, such as carbamazepine, oxcarbazepine, and eslicarbazepine. For patients at risk for renal calculi, we should avoid topiramate and zonisamide unless other appropriate drugs have failed. Additionally, for patients with cardiovascular risk factors such as high cholesterol and other present risk factors, carbamazepine phenytoin and phenobarbital should not be used first line, since hepatic enzyme induction can be associated with worsening cardiovascular risk factors (e.g., raising cholesterol levels).3

Psychiatric side effects constitute yet another category of side effects. AEDs such as levetiracetam, topiramate, zonisamide, tiagabine, phenobarbital, and perampanel can cause psychiatric issues such as mood disturbance, irritability and suicidal thoughts.4 There are some AEDs that may actually improve psychiatric function (usually by stabilizing mood) in some individuals, including carbamazepine, valproate, lamotrigine, and pregabalin (anxiety). It is important to realize that these effects are variable, and paradoxical effects can occur in some people. When starting a new AED, mood and psychiatric function should be followed closely.

A portion of patients taking certain agents may also experience an increase in weight. Drugs that have been tied to weight gain include valproate, gabapentin, carbamazepine, pregabalin, ezogabine, and perampanel. On the other hand, topiramate, zonisamide, and felbamate may decrease weight.5

Several newer drugs have the potential for major idiosyncratic side effects, as well:

No severe idiosyncratic adverse events have been reported so far for levetiracetam, gabapentin, or pregabalin.

Question #4: What are the drug characteristics?

Each drug has distinct characteristics such as the titration rate as well as the route of metabolism and potential for drug interactions. After accounting for efficacy and adverse events, scrutinizing these characteristics will help us narrow a short list of medications that may be appropriate for a given patient.

One characteristic that physicians treating epilepsy should consider is the potential for hepatic induction. Importantly, some of the most powerful hepatic inducing agents are antiepileptic drugs (phenytoin, carbamazepine, phenobarbital). Induction is caused by increased synthesis of metabolizing enzyme, which takes up to three weeks. By increasing metabolism through selected pathways, hepatic induction affects all substrates metabolized through those pathways, including hormones, vitamins, and other drugs. Induction is usually widespread (affecting many hepatically metabolized drugs) and it will shorten the plasma half-lives of inducible drugs given concomitantly. It may also increase conversion to an active metabolite.

Enzyme induction in women can lead to alteration in estrogen levels and increase in vitamin D metabolism, which may contribute to osteomalacia. Additionally, AEDs that cause enzyme induction in women, such as carbamazepine, phenytoin, primidone, and phenobarbital (as well as topiramate, oxcarbazepine, and eslicarbazepine at higher doses) also reduce oral contraceptive efficacy. Strongly inducing AEDs also lower vitamin K during pregnancy.

It is always important to review non-epilepsy medications that patients are receiving and to be watchful for interactions as other drugs are prescribed over the course of time. Induction may reduce effectiveness of commonly used drugs such as statins, anti-depressants, and antibiotics. If drug interactions are not taken into consideration the consequences can be very problematic and in some cases even life threatening. For example, in one study of children with acute lymphoblastic leukemia, 40 children out of 716 were receiving enzyme-inducing AEDs, and these children had a worse outcome in terms of CNS relapse, hematological relapse, and event-free survival, due to induction of chemotherapeutic agents that had been prescribed.7

Question #5: What is the patient’s sex?

There are issues that most be considered when AEDs are given to women, particularly when they are of childbearing age. Some AEDs have been associated with birth defects or delayed brain development. Valproic acid is the most problematic, but others are also listed as “category D” by the FDA, suggesting they may be harmful to the fetus. As noted previously, other problems relevant to women’s health (e.g., reduced bone density, oral contraceptive failure) may be an issue when an enzyme-inducing anti-epileptic drug is used, suggesting that non-inducing drugs should be considered.

Question #6: What is the age of the patient?

Many of the issues relevant to choosing an AED in the elderly have already been discussed above. The elderly are more prone to hyponatremia, so drugs such as carbamazepine, oxcarbazepine, and eslicarbazepine should be used with caution. Older patients tend to be on many concomitant drugs for other conditions, so AEDs associated with drug interactions (particularly enzyme-inducing AEDs) may not be a wise choice.

Epilepsy management is a complex exercise that requires physicians to account for a range of patient and drug factors that may impact care. Recognizing that there is no universal standard or guideline, the path to sound treatment begins with asking the right questions and assessing the needs of individual patients. n

Jacqueline A. French, MD is a Professor of Neurology and Director of Translational Research and Epilepsy Clinical Trials at New York University Langone Medical Center. She is also Chief Scientific Officer of the Epilepsy Foundation.

Under the Microscope: Seizure Clusters