Where Neurology and #Culture Intersect 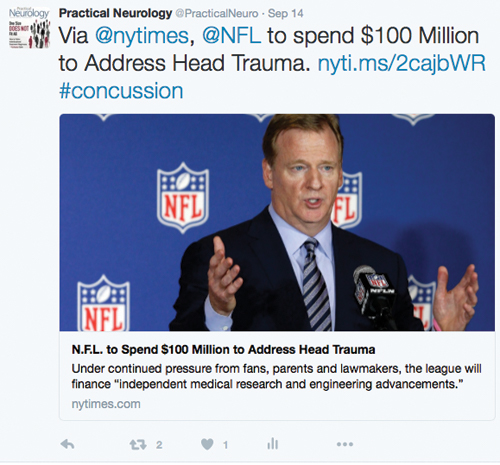 If you’ve watched an NFL football game this season, no doubt you’ve seen or heard about the league’s new concussion protocols. That’s because, in recent years, the league has finally acknowledged mounting evidence suggesting that repeated trauma to the head—which has become one of the game’s calling cards—can have devastating short- and long-term effects on the brain.

And yet, despite the increased emphasis on concussion protocols and the league’s steps to discourage helmet-to-helmet contact, the hits keep coming. With star quarterback Cam Newton’s recent concussion, as well as several other instances of the league’s failure to carry through protocols after hits that would have warranted review, it’s clear the league still has a problem. As Francis Conidi, DO pointed out in the March 2016 edition of Practical Neurology® magazine (available at PracticalNeurology.com), the scientific community still has a ways to go, both to recognize and more importantly articulate the science of concussion and emerging research into chronic traumatic encephalopathy (CTE). According to Dr. Conidi, this would require a much greater commitment from the NFL to spearhead new research that could encourage a heightened understanding and awareness of concussion and CTE as well as point to potential intervention and prevention strategies.

Perhaps in response to added pressure, the league last month announced it would make a $100 million investment to address head trauma. According to NFL commissioner Roger Goodell, the funds will be spent on the development of new technology and more research on the effects of head injuries. Despite the league’s continued investment, questions remain about whether these actions can address the underlying realities of football.

A team of researchers at the Cleveland Clinic is investigating new ways to optimize Deep Brain Stimulation (DBS) while minimizing risks. In a recent post on the Cleveland Clinic’s open forum, Consult QD, Kenneth Baker, PhD describes a potential new paradigm in DBS that involves using the multiple contacts of the DBS lead, “to deliver intermittent, pseudorandomized bursts of brief, low-intensity, spatially distributed pulse trains for the specific purpose of desynchronizing ‘pathological’ neural oscillations.” The approach, called coordinated reset DBS, uses lower individual pulse amplitude to achieve its effect, thereby reducing the risk of side effects, according to Dr. Baker. “Moreover, its desynchronizing effects are hypothesized to endure beyond treatment delivery, perhaps due to plastic changes at the synapse level, such that intermittent therapy may yield benefit that outlasts stimulation by days or weeks.” He goes on to note that the continued efforts of the Cleveland Clinic team will explore the translational potential of this method and address the link between changes in neural activity in the motor circuit and motor sign manifestation in Parkinson’s disease. 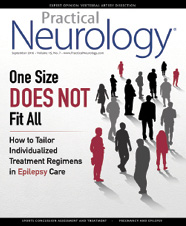 ASK THE RIGHT QUESTIONS: NAVIGATING THE COMPLEX SPECTRUM OF AEDS

By Jacqueline A. French, MD

“Epilepsy management is a complex exercise that requires physicians to account for a range of patient and drug factors that may impact care. Recognizing that there is no universal standard or guideline, the path to sound treatment begins with asking the right questions and assessing the needs of individual patients.”

Along with the pain and pressure, colors and shapes flood Priya Rama’s mind in fluid poetry.