Stroke as Initial Manifestation of Neurosyphilis in an HIV Positive Patient

With neurosyphilis on the rise, young patients who present with ischemic strokes should be tested for HIV and syphilis.

A 30-year-old male with past medical history of ankylosing spondylitis, for which he has was treated with etanercept, presented to the emergency department with three days of double vision. Prior to this, the patient was in otherwise good health with no constitutional symptoms. A consult by the neurology service revealed a left fourth nerve palsy. A brain MRI revealed a Diffusion Weighted Image positive 3mm ischemic stroke in the midbrain (Figure 1). The patient otherwise denied any fever, chills, night sweats, weight loss, meningismus, or headache. 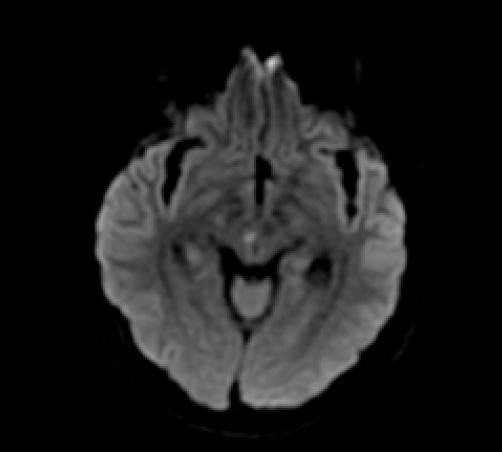 The patient had a negative initial work-up for stroke, including CT angiography (CTA) of the head and neck, fasting lipids, hemoglobin A1C, and echocardiogram. Given his age, further laboratory work up included hypercoagulable panel, HIV testing, and lumbar puncture. The patient tested positive for HIV with a CD4 count of 271 cells/uL. Lumbar puncture revealed 204 white blood cells per mm3, 17 red blood cells per mm3, 91 percent lymphocytes, glucose of 21 mg/dL and protein of 325 mg/dL. CSF VDRL was 1:8, and serum RPR was reactive with a titer of 1:256. He was diagnosed with neurosyphilis based on laboratory findings.

Our patient was treated with IV penicillin for two weeks and was scheduled for outpatient initiation of highly active antiretroviral therapy (HAART). His diplopia resolved during the hospital course and he remained otherwise asymptomatic.

Neurosyphilis is often divided into meningeal, meningovascular and parenchymatous forms.3,4 Early neurosyphilis can occur as asymptomatic or syphilitic meningitis, or late as meningovascular syphilis, general paresis or tabes dorsalis. Meningovascular neurosyphilis is an inflammatory process that is a result of the development of endarteritis obliterans in small blood vessels of the meninges, brain, and spinal cord.4 Meningovascular syphilis can occur within the first few months to several years after the infection with latency of around seven years in patients with normal immune responses.1 With concurrent HIV infection, this latency period may be decreased by increasing the propensity of the disease to progress to neurosyphilis.6

The CSF abnormalities occurring in neurosyphilis include elevated protein, pleocytosis, and low glucose.7 Diagnosis of neurosyphilis is based on reactive serologic tests, with elevated CSF protein or cell count, or positive VDRL test. Testing for HIV should also be considered as neurosyphilis is the initial presentation of HIV in nearly 25 percent of patients.3

In a retrospective study, among the 149 neurosyphilis patients reviewed, 14 percent developed ischemic stroke as a primary symptom.8 Another case report described a young patient with HIV infection and neurosyphilis who developed a brainstem infarction with a prior cutaneous rash.3

Neurosyphilis is a treatable disease. Meningovascular syphilis is usually treated with intravenous penicillin for 14 to 21 days. Anti-platelet therapy is also recommended due to endothelial cell proliferation.3

Given the rise in number of cases of neurosyphilis in developed countries as well as increased rate with co-infection with HIV, testing for HIV and syphilis is recommended in young patients who present with ischemic strokes. It is also important to keep in mind that patients with neurosyphilis can have no prior symptoms upon presentation, as in the case of our patient. n

Kent Ellington, MD is a board-certified neurohospitalist at the Seton Brain and Spine Institute in Austin, TX.

Myriam Abdennadher, MD is an internist at the University of Texas at Austin Dell Medical School.

Clarifying the Role of Amyloid Burden in Vascular Cognitive Impairment