Emotional Communication and the Neurologist

Within the realm of patient-physician relationships, one of the more overlooked but important aspects of practice is emotional communication. According to Kenneth Heilman, MD, who directed a session on the topic at the recent AAN Meeting, problems of emotional communication can manifest through various neurological conditions. Therefore, it is incumbent upon physicians to know how to identify and manage these issues.

Disorders of emotional communication often encompass an inability to recognize or express emotions, according to Dr. Heilman. “The communicating we do with emotions through facial expressions often has a lot more meaning to us than words.” In other words, it’s not what you say, it’s how you say it. According to Dr. Heilman, increasing research on this topic over the last several decades has revealed much about speech and communication. “A lot of studies have shown that the left hemisphere is important for propositional speech and the right hemisphere is very important for emotional communication, such as tone of voice, prosody, and emotional faces,” he explains. Emotional disorders such as affective aprosodia can impair the patient’s ability to express and comprehend emotional communication. According to Dr. Heilman these disorders may be more prevalent in neurology because they are often caused by neurological conditions such as degenerative dementias, stroke, MS, and head trauma. Therefore, it is essential for neurologists to be aware of these conditions.

“There is virtually no scale that actually looks at emotional communication,” says Dr. Heilman. This can lead to errors in diagnosis as well as inadequate management and treatment of these serious disabilities. Although much has been learned about emotional communication over the last several decades, many in the general public and physician communities lack awareness,” says Dr. Heilman. “Additionally, more research is needed to address rehabilitation efforts.”

Disorders of emotional communication can have a significant impact on patients’ day-to-day lives. “As far as relationships are concerned, emotional communication is very important,” says Dr. Heilman. And while neurologists need to be aware of these problems, determining how to best address any potential disorders can be a challenge. “While it is difficult to test for these problems, arguably the most important thing neurologists can do is talk to families and caregivers, since many are not aware of emotional communication disorders.” In terms of speaking with patients, Dr. Heilman recommends asking a series of simple questions to gauge the patient’s ability to comprehend or express emotion. He recommends that physicians test patients by delivering ordinary statements with a modulated voice and then ask if the patient is aware of any irregularities. For emotional expression, he says, “Ask the patient to tell you the saddest thing that’s happened in their life and see if their prosody sounds sad and they express an emotional face.”

Dr. Heilman is hopeful that continued research efforts will help physicians better understand, test for, and manage these disorders. “Communication is such a primitive thing and is so important to who we are.” Sometimes just knowing there is a problem can go a long way toward relieving conflicts and facilitating understanding. Therefore, given the deficits individuals can suffer from disorders of emotional communication, it is incumbent on physicians to be prepared to assess for them. n

Kenneth Heilman, MD is Professor of Neurology and Health Psychology at the University of Florida School of Medicine. 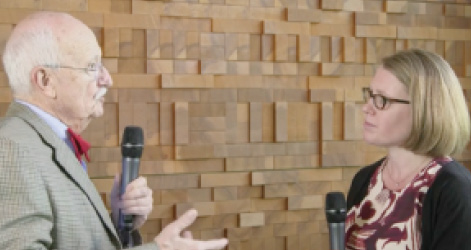 As part of our video coverage of the AAN Meeting in Vancouver, host Michelle Dougherty, MD spoke with Dr. Heilman about his session on emotional communication. Visit PracticalNeurology.com to see the interview.

A Plan for Action: How Stronger Patient Communication Can Yield Improved Outcomes in the Treatment of Seizure Clusters