Rapid progress in deep brain stimulation and focused ultrasound offer a glimpse of the future of treatment for Parkinson's disease.

Surgery for Parkinson’s disease (PD) was introduced in the 1930s and witnessed many adaptations as physicians gained knowledge, skill, and experience. Early pallidotomy and thalamotomy procedures created irreversible lesions—with varying levels of precision—via arterial ligation, thermal or chemical destruction, or radiofrequency ablation. Although not curative, thalamotomy had a dramatic effect on tremor, and pallidotomy was variably effective for rigidity, bradykinesia, and dystonia. With the widespread use of levodopa beginning in the late 1960s, though, lesioning procedures declined precipitously. Over time, motor complications from chronic levodopa use, coupled with improved techniques renewed interest in surgical procedures.1 Thalamotomy and pallidotomy are still performed in select cases, but they were eventually surpassed by adjustable neurostimulation.

Deep brain stimulation (DBS), which essentially mimics a lesional effect, was FDA-approved for PD in 2002 and quickly became the most frequently performed surgical procedure for Parkinson’s.2,3 In the appropriate candidate—one with moderate disease who remains responsive to levodopa but suffers debilitating complications (motor fluctuations or dyskinesia)—it can be extremely beneficial.

One of the more recent surgical technologies to enter the therapeutic pipeline for Parkinson’s is magnetic resonance–guided focused ultrasound (MRgFUS). This modality—currently in research trials—generates the same lesions as the aforementioned pallidotomies and thalamotomies but through an incisionless procedure.4

This article will review the latest developments and advances in Parkinson’s disease treatments, focusing specifically on DBS and magnetic resonance-guided focused ultrasound technology.

In the DBS procedure for Parkinson’s disease, electrodes are implanted uni- or bilaterally into either the globus pallidus interna (GPi) or subthalamic nucleus (STN). The choice is dependent on the experience and judgment of the neurologist and neurosurgeon and the individual patient’s symptoms and situation.5 Stimulation of either nucleus improves motor function and activities of daily living. When dystonia is prominent, GPi may be preferred; if the goal is greater reduction in medication dosages, STN is selected.5 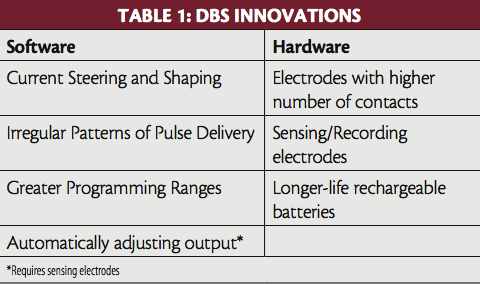 Once the electrodes are situated, they are connected to the implantable pulse generator (IPG), which contains the battery and neurostimulator. The IPG is placed subcutaneously, usually inferior to the clavicle (although sometimes in the abdomen) and delivers continuous, high-frequency trains of electrical pulses. Through a handheld device, the clinician can program a number of settings on the IPG:

Although both Medtronic and St. Jude Medical have FDA-approved DBS devices, only the Medtronic implants are commercially available. The basic structure and functionality of these systems are essentially the same. However, the Medtronic IPGs can deliver either constant voltage or constant current stimulation, whereas the St. Jude device only has capabilities for the latter. Current devices adjust output voltage to provide constant current stimulation irrespective of fluctuations in brain impedance (resistance). The current that constant voltage devices supply will vary if the impedance changes over time; this is a somewhat common occurrence since impedance falls in the months following the immediate postoperative period.

Regardless of which device or program is chosen, unique parameters are set for the individual patient and successively programmed to maximize benefit and limit side effects, while gradually adjusting medication. Following STN DBS, dopaminergic medications can generally be tapered but not discontinued entirely.

A well-selected candidate will experience solid symptomatic benefit, but every therapy has limitations and DBS is no exception. A few of the shortcomings are as follows:

Innovations in deep brain stimulation aim to address many of these issues with the goals of enhanced efficacy, reduced side effects, and prolonged battery life (with subsequently fewer replacement procedures). Advances include improvements to the present systems and programming options, development of the next generation of devices, and possibly stimulation of a novel target to treat postural instability and gait difficulty (PIGD).

Updates to present DBS systems and programs are characterized by attempts to “shape” and “steer” the delivered current. Such capabilities would allow the clinician to precisely direct electrical stimulation to the target of interest. The currently available programming approaches emit cylindrical or spherical stimulation fields that are distributed rather evenly around the orientation of the electrode. This somewhat indiscriminate delivery can cause unwanted stimulation of neighboring tissue and detract stimulation from the target tissue, leading to side effects and decreased efficacy.

Newer electrodes with a greater number of contacts and novel programming options permit the preferential distribution of current in a more specific direction.4 The ability to steer stimulation—guiding it away from an unfavorable brain area and toward a more efficacious location—would be particularly helpful in the setting of suboptimal lead placement, and might even prevent reoperation for repositioning. A small study of STN DBS using an investigational 32-contact electrode deemed steerable stimulation safe and tolerable and elevated the therapeutic window (amount of current that could be applied without worsening side effects).4

The Vercise system (Boston Scientific Corporation), approved in Europe and is in clinical trials in the United States, encompasses a number of these enhancements, including an electrode that houses eight contacts and offers “multiple independent current control.” The latter permits separate current to be conveyed through each active contact, in contrast to existing systems that divide current over the chosen active contacts.10

Different Parameters
and Patterns of Stimulation

Alternative DBS stimulation parameters have been examined to determine if they might more effectively alleviate motor symptoms of Parkinson’s. Lower frequency settings have given mixed results on dysphagia, bradykinesia, postural control, and freezing of gait.4,11 Shorter pulse durations have lowered the required current output, which could increase the side effect threshold and prolong battery life by reducing the total amount of current needed over time.4

New patterns of stimulation are being explored to see if they might more thoroughly suppress or disrupt the pathological rhythmic activity in the basal ganglia, and therefore more effectively manage the clinical symptoms of Parkinson’s disease.12 DBS is traditionally administered in a continuous, tonic, regular pattern, but recent trials have suggested that a non-regular manner of stimulation may be more beneficial to ease motor symptoms.2,12,13 Various models have been proposed but most aim to “desynchronize” the neurons with an initial high-amplitude pulse that primes them for a second, weaker stimulus.2 These patterns could deliver less overall energy, potentially translating to fewer side effects and longer battery life.4

Development of the Next Generation of Neurostimulators

As manufacturers modify existing systems, the next generation of stimulators is in development. Today’s DBS devices operate in a unidirectional, open-loop mode. Pre-programmed stimulation parameters are supplied in an uninterrupted manner, regardless of one’s fluctuating clinical status. Because of dynamic factors, such as alterations in medication levels, a patient is often subjected to periods of relative over- and under-stimulation, with associated stimulation-related adverse effects and suboptimal effects of DBS, respectively.4,8 Moreover, programming settings can be adjusted during scheduled clinical appointments based on limited information, such as the physician’s motor examination and patient’s interim history of symptom control.

Bidirectional, closed-loop DBS technology would address these issues. “Smart” systems could sense a patient’s unique neuronal signals and use this data to instantly modulate DBS settings and deliver stimulation on an as-needed basis (i.e., when freezing of gait or uncontrolled tremor occurs), rather than continuously.8 Adaptive devices could improve efficacy and efficiency, reducing side effects and prolonging battery life. By giving an inside look into individuals’ electrical signaling patterns and their responses to DBS, these devices could also afford insights into the pathophysiology of Parkinson’s disease and the mechanisms of DBS.

Multiple trials in Europe and the US are examining the above strategies in patients with Parkinson’s disease.4 Early results are encouraging. In fact, one study of unilateral closed-loop DBS showed that it was 30 percent more effective than conventional stimulation, and it decreased stimulation and power consumption requirements by approximately 50 percent.8

Since current DBS approaches do not adequately address PIGD in the majority of patients, researchers are beginning to target DBS to novel brain locations—the pedunculopontine nucleus (PPN) and adjacent pedunculopontine area (PPNa)—to determine if this might relieve axial symptoms, freezing of gait, and falls. The PPN and PPNa are part of the mesencephalic locomotor region (MLR), situated in the dorsal midbrain and contains GABA-ergic, glutamatergic and cholinergic neurons.14 The MLR plays a role in the initiation and modulation of gait and likely also the regulation of postural muscle tone.15-17

Additional support for the use of deep brain stimulation in the PPN and PPNa stems from the following:

Promising though these targets seem, it is worth noting that clinical results have been inconsistent thus far. Differences in lead location and stimulation parameters, as well as the high variability of brainstem anatomy, may be to blame for this.4 Ongoing efforts strive to learn more about the PPN and its role in PD and to determine the utility of targeting it for treatment. To this end, one clinical trial will place DBS devices (capable of both stimulating and recording neuronal signals) concurrently in both the GPi and PPN for management of freezing of gait.20

The advantages of this intervention are that it can be performed without anesthesia or incisions; it is non-invasive; and it takes effect immediately. MRgFUS does not typically require repeat procedures unless the benefit wears off, and since there is no implanted hardware, there is no need for reprogramming or replacement surgeries. Although the procedure comes with risks, the rate of complications (such as infection and bleeding) has been low in preliminary studies.

The disadvantages, similar to other lesioning techniques, are that it is irreversible and permanent. Bilateral procedures are also typically avoided because dysphagia, dysarthria, and/or cognitive dysfunction are unfortunately common sequelae.

Early small studies of MRgFUS in Parkinson’s patients indicate safety, tolerability, and effectiveness.4 Building upon these results, two types of trials are ongoing to evaluate the safety and efficacy of this therapy in PD. In non-randomized trials, unilateral MRgFUS pallidotomy of the GPi is being used for levodopa-induced dyskinesia.21,22 In placebo-controlled trials in which half of the subjects undergo a sham procedure, unilateral MRgFUS thalamotomy of the ventral intermediate nucleus is being done for medication-refractory tremor.23

If approved, MRgFUS will expand the array of therapeutic options for patients with Parkinson’s disease with severe or advanced disease, principally those with contraindications to traditional surgeries or DBS.

In the future, this technique may also represent a cutting-edge way to deliver existing and new therapies to the brain. Pre-clinical work is using focused ultrasound to temporarily and reversibly disrupt the blood brain barrier. Combining this with drugs or gene, stem cell, or immuno-therapy could hypothetically improve permeability and therefore treatment efficacy.

Progress in deep brain stimulation and developments in focused ultrasound are important innovations in neurology. These surgical procedures complement the improvements occurring in available drugs. Surgical interventions may never be for everyone with PD, but they do provide symptomatic benefit for a large number of patients. Updating the current DBS systems, creating newer iterations of them, and improving surgical techniques will enrich the spectrum of symptomatic therapies for PD and the types and number of patients to whom they can be offered. n

14. Hathout GM and Bhidayasiri R. Midbrain ataxia: an introduction to the mesencephalic locomotor region and the pedunculopontine nucleus. AJR Am J Roentgenol. 2005. 184(3):953-6.

20. A Responsive Closed-Loop Approach to Treat Freezing of Gait in Parkinson’s Disease. https://foxtrialfinder.michaeljfox.org/trial/4031/

22. A Feasibility Study to Evaluate Safety and Initial Effectiveness of ExAblate Transcranial MR Guided Focused Ultrasound for Unilateral Pallidotomy in the Treatment of Dyskinesia of Parkinson’s Disease. https://foxtrialfinder.michaeljfox.org/trial/3700/

The Art of Medicine in the Age of Technology

A Diagnosis of Exclusion: Keys to Consider on the Diagnostic Accuracy of Alzheimer's Disease