Posterior Reversible Encephalopathy Syndrome (PRES): A Case Report and Review of the Literature

Posterior Reversible Encephalopathy Syndrome (PRES) is a condition caused by reversible subcortical vasogenic edema that can clinically manifest with headache, altered mental status, visual disturbances, and/or seizures.1 Ahead we present a case of a woman who was admitted for intractable headaches and eventually found to have radiographic stigmata of PRES.

A 56-year old female presented with new onset blurry vision, diplopia, headache, and dizziness, 24 hours after being discharged from her local hospital. Her initial hospitalization was for hypertensive urgency with blood pressure as high as 230mmHg systolic, requiring administration of IV enalaprilat. Her symptoms of visual disturbance, headaches, and dizziness started shortly after discharge and worsened over the next 24 hours. Upon return to the emergency department, she was afebrile with a regular heart rate and rhythm. Systolic blood pressures ranged from 98-107mmHg, with diastolic blood pressure ranging from 54-67mmHg. The patient had no evidence of papilledema on fundoscopic examination, no focal neurologic deficits, and there was no observation of exophthalmos, ptosis, or nystagmus. Additionally, laboratory studies revealed ESR, TSH, and CRP all within normal limits.

She received 1-liter Bolus of Normal Saline, Benadryl 50mg PO once, and Reglan 10mg by mouth once. The Benadryl and Reglan were given for an initial diagnosis of migraine headache, which was subsequently relieved. A CT of the head without contrast was negative for intracranial hemorrhage. An MRI of the head with and without contrast was performed, and it demonstrated symmetric FLAIR/T2 signal abnormality predominately within the cortical and subcortical white matter of the occipital lobes bilaterally with corresponding restricted diffusion (Figure I). These findings were consistent with posterior reversible encephalopathy syndrome (PRES). The patient was discharged with a medication regimen to maintain her systolic blood pressure in a range between 120-140 mmHg, and with neuro-ophthalmology follow-up.

In 1996, Hinchey, et al. described a condition characterized by sudden headaches with or without neurologic deficits or seizures related to dysfunction of the autoregulatory properties of the cerebral vasculature. They coined the name, “reversible posterior leukoencephalopathy syndrome.”1 In later years, the condition was renamed posterior reversible encephalopathy syndrome to more accurately consider that the stigmatic lesions are not restricted to white matter.2 PRES is frequently associated with hypertension, sepsis, pre-eclampsia, eclampsia, autoimmune disorders (e.g. rheumatoid arthritis, Crohn’s disease, systemic lupus erythematosus), renal failure, hypomagnesemia, hypercalcemia, hypercholesterolemia, and exposure to immunosuppressive or cytotoxic medications.3,4 Rarer associations may include iatrogenic causes such as the administration of linezolid, contrast, and intravenous immunoglobulin. Environmental insults such as inoculation of scorpion poison, intoxication with LSD, or an ephedra overdose are also implicated.4 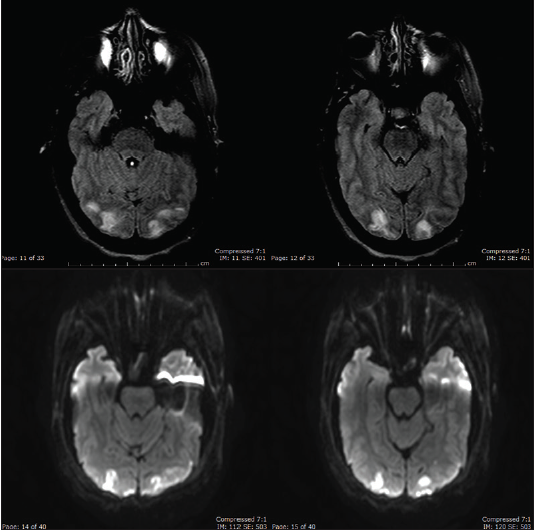 The exact mechanism of PRES is currently not well understood. One of the dominating hypotheses is that severe hypertension exceeds the auto-regulatory ability of the cerebral blood vessels, leading to compromise of the blood-brain barrier, and vasogenic edema.3 The upper limit of auto-regulation of the cerebral vasculature is approximately 150-160mmHg. However this range can extend up to 30mmHg higher in acute sympathetic states. This phenomenon can occur because of the rich sympathetic innervation of the majority of the cerebral vasculature. However, because little sympathetic innervation exists in the posterior fossa, the parieto-occipital regions of the brain can be particularly susceptible to hyperperfusion.4 Chronic hypertension may contribute to increased limits over time.

Despite PRES being associated with accelerated hypertension, approximately 15 to 20 percent of patients can be normotensive or hypotensive during initial evaluation,5 as our patient presented. The existence of this finding suggests that the mechanism is not completely explained by defects in auto-regulation of the cerebral vasculature. Other postulated theories for PRES include physical disruption of the endothelial layer, blood-brain barrier compromise in inflammatory conditions such as sepsis or autoimmunity, or vessel abnormalities leading to cerebral vasoconstriction and hypo-perfusion states such as in eclampsia and cyclosporin toxicity.5 Our patient may have been in a hypo-perfused state on presentation, likely stemming from the sudden changes in blood pressure from her prior hospitalization.

Clinically, PRES includes several types of clinical signs and symptoms. Approximately 50 to 80 percent of PRES patients are encephalopathic, 60 to 75 percent manifest with seizures, 50 percent with headaches, 33 percent with visual disturbances, 10 to 15 percent with focal neurologic deficits, and five to 15 percent with status epilepticus.4 Encephalopathy in these patients can range from stupor to comatose. Seizures are often generalized, and may be multiple. Status epilepticus may also manifest, but this is less common. PRES can be a suspected reason for SE if the patient’s EEG is positive for parieto-occipital to temporal sharp waves.6 The acute encephalopathy syndrome (confusion, headache, vomiting, and depressed consciousness) and visual disturbances (blurred, vision, hemianopsia, or complete cortical blindness) also may lead the clinician to place PRES in their differential diagnosis. Labs may reflect normal CSF, and laboratory signs of endothelin injury, such as increased LDH, thrombocytopenia, and the presence of schistocytes.3

MRI is particularly useful in the diagnosis of PRES. Radiographic stigmata of the disease usually involves increased signal on T2 and fluid-attenuated inversion recovery (FLAIR) imaging of subcortical white matter with vasogenic edema predominantly involving the parieto-occipital and posterior temporal lobes of both hemispheres of the brain.4 However, other structures such as the anterior cerebral regions, deep white matter, brainstem, and the cerebellum may also be involved. Three primary descriptive variations of radiographic findings exist in about 70 percent of patients: a dominant parieto-occipital pattern, holo-hemispheric watershed pattern, and superior frontal sulcus pattern.7 Frontal and temporal lobe involvement can be seen in up to 75 percent of cases. Similarly, the edema can affect the basal ganglia and the brainstem in up to a third of cases and the cerebellum in up to half.4 Finally, intracranial hemorrhage is common, complicating 10 to 25 percent of cases. Intra-parenchymal hemorrhage is the most common type of intracranial hemorrhage and subarachnoid hemorrhage is the second most common type.8 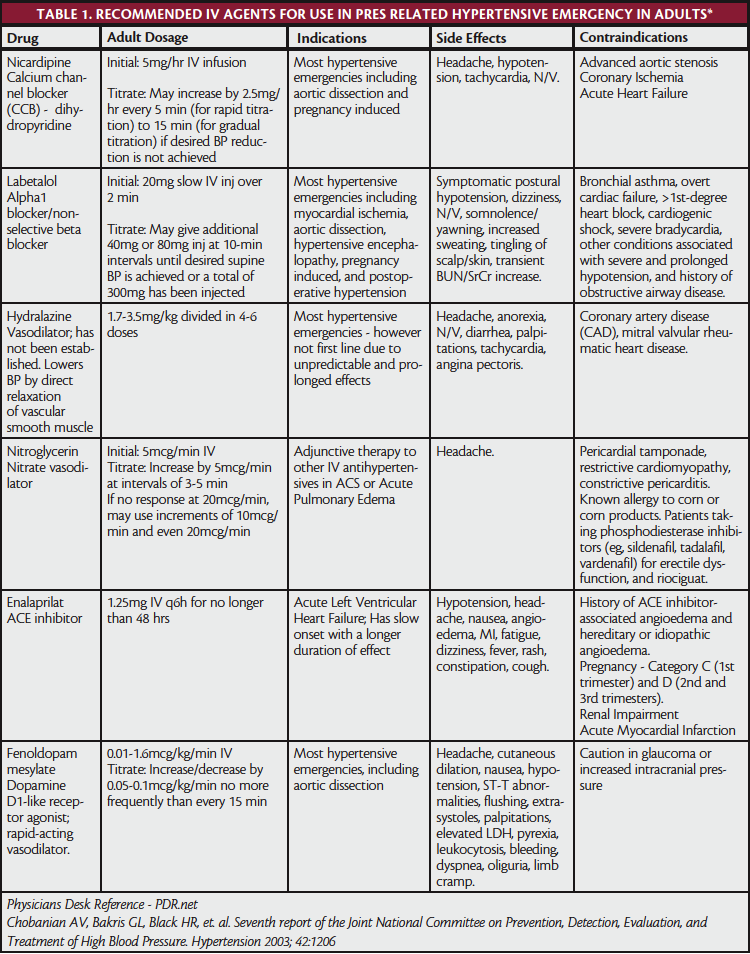 When a patient presents with acute or subacute neurologic symptoms, the clinical context is important for the diagnosis of PRES. If a patient presents with neurologic symptoms as mentioned above, and is either in hypertensive emergency, has labile blood pressures, is on chemotherapeutics, has chronic hypertension, an autoimmune disorder, renal failure, or has pre-eclampsia/eclampsia PRES should be in the differential diagnosis. Other diseases to consider in the differential include infection, paraneoplastic encephalitis, malignancy, CNS vasculitides, alcohol withdrawal, drug intoxication, and acute stroke.4 Appropriate workup should include a complete blood count, urine toxicology screen, lumbar puncture, and imaging - computed tomography without contrast (to rule out intracranial hemorrhage) and MRI without contrast (to evaluate for tumors or ischemic changes).

The general concept of PRES treatment should revolve around strict blood pressure control. To our knowledge, no randomized controlled trials have been performed to assess optimal therapeutic management for PRES. The general recommendation for those diagnosed with PRES is monitoring in an intensive care unit, because these patients can have labile blood pressures that would best be captured by monitoring with an arterial line.4 Appropriate consultation services should be included depending on the suspected causative factor.3 If applicable, the removal of any offending drugs or illicit substances, the treatment of seizures/SE, sepsis, or autoimmune disorder exacerbations, and consideration of delivery of the fetus by cesarean section in those with pre-eclampsia or eclampsia.

PRES is a reversible condition presenting with acute neurologic symptoms ranging from headaches to seizures with radiographic evidence of vasogenic edema in various areas of the brain. Although the mechanism has not been fully elucidated, endothelial dysfunction/injury related to accelerated hypertension, exposure to certain medications, eclampsia, or autoimmune disorders have been implicated. Treatment of PRES revolves around strict blood pressure control using JNC guidelines for hypertensive emergencies, as well as correction of any potential causative factors. n

Kevin G. Lazo, DO is in the Department of Medicine, Northwell Health Lenox Hill Hospital in New York City.

Jane A Lee, MD is a Neuroradiologist at Lenox Hill Hospital in New York City.

Maria V. DeVita MD, FACP, FASN is a Clinical Professor of Medicine at Hofstra Northwell School of Medicine in New York City, and Associate Director of the Division of Nephrology at Lenox Hill Hospital.

David L. Coven MD, PhD is the Director of the Cardiac Care Unit and an Interventional Cardiologist at the Northwell Health Lenox Hill Heart and Vascular Institute of New York.

A Candid Look at Stroke Guidelines