New findings from the PRISMS-15 study suggest that higher cumulative exposure to subcutaneous IFN B-1a (Avonex, Biogen) may be associated with better clinical outcomes in relapsing-remitting MS (RRMS), and that early change in EDSS score may have prognostic value over many years (J Neurol Neurosurg Psychiatry). Investigators conducted a single follow-up visit with patients from the original PRISMS study, comparing outcomes in the lowest and highest quartile of cumulative subcutaneous IFN-1a dose groups, and according to total time receiving subcutaneous IFN B-1a as a continuous variable per five years of treatment. They also analyzed potential prognostic factors for outcomes.

Analyzing 290 of the original 560 patients from the PRISMS study, the authors found that higher cumulative dose exposure and longer treatment time appeared to be associated with better outcomes on annualized relapse rate, number of relapses, time to EDSS progression, change in EDSS, and time to conversion to secondary-progressive MS (SPMS). Additionally, they noted associations between higher dose exposure and lower proportions of patients with EDSS progression and conversion to SPMS. The authors concluded that change in EDSS from baseline to 24 months was a strong predictor of evaluated clinical outcomes over 15 years.

The FDA approved Bayer Healthcare’s Betaconnect, the first electronic autoinjector in the treatment of relapsing-remitting multiple sclerosis. Betaconnect will be available exclusively to patients treated with Betaseron (interferon beta-1b). According to the company, Betaconnect was created based on feedback from patients and caregivers alike and offers customizable injection speed and depth settings that allow patients to inject quietly with precision at the touch of a button. It also has an optional back-up reminder function that lets them know when it’s time for their next injection.

Additionally, the automatic needle insertion and retraction with a visual and audio end-of-dose indication lets patients know when the injection is complete. The product will be available in 2016. 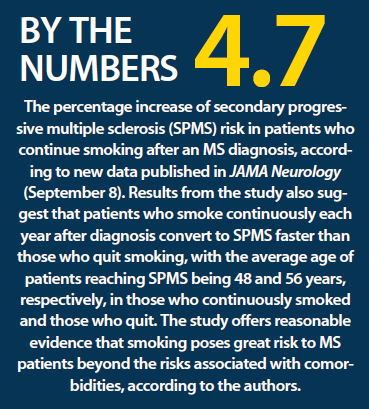 Melatonin Contributes to the Seasonality of MS Relapses

Melatonin may be a contributing factor to the seasonality of MS relapses, according to new research. In a report published in Cell (2015 Sep 10;162(6):1338-52), investigators reported that melatonin levels, whose production is modulated by seasonal variations in night length, negatively correlate with multiple sclerosis activity in humans. They further observed that treatment with melatonin ameliorates disease in an experimental model of multiple sclerosis and directly interferes with the differentiation of human and mouse T cells.

Results from the ORATORIO Phase III trial suggest that Roche’s investigational ocrelizumab reduces progression of clinical disability in patients with primary progressive multiple sclerosis, compared to placebo. Ocrelizumab is a humanized anti-CD20 monoclonal antibody that targets mature B lymphocytes. The investigators noted that patients treated with ocrelizumab experienced an increase in EDSS that was sustained for at least 12 weeks. Moreover, the risk of serious adverse events in patients receiving ocrelizumab—including infusion-related reactions—was similar to those receiving placebo. The results were presented at the 31st Congress of the European Committee for Treatment and Research in Multiple Sclerosis in Barcelona, Spain (Abstract #228). Roche plans to submit late-stage study data to the FDA in early 2016 and is pursuing marketing authorization for ocrelizumab in both relapsing MS and PPMS. n 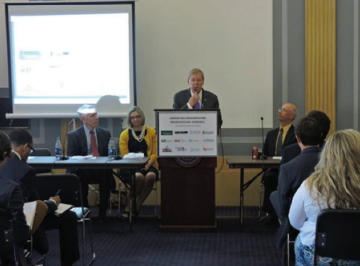 Seeking to rally support for advancing research for neurological diseases, researchers and members of the National MS Society collaboratively hosted a briefing at the US Senate last month. In particular, the briefing discussed the Advancing Research for Neurological Diseases Act (S. 849/H.R. 292), which would establish a system to collect the size and makeup of various neurological disease populations. The bill’s lead sponsors, Senator Johnny Isakson (GA) and Senator Chris Murphy (CT) , kicked off the briefing along with MS activist and neurologist from the US Department of Veterans Affairs, Mitch Wallin, MD and Mary Lou Cumberpatch of Maryland, who lives with Parkinson’s disease. Senator Isakson, who also lives with Parkinson’s disease, encouraged all in attendance to cosponsor the bill.

“We are encouraged by the potential this bill has to accelerate research for multiple sclerosis,” Cynthia Zagieboylo, President and CEO of the National Multiple Sclerosis Society, said. “Without basic data concerning the size and makeup of the MS population, our researchers are working at a distinct disadvantage because they have an incomplete picture of the disease. The additional information that this new data system would supply could point to new environmental triggers for the disease, which could lead to new treatment targets and a better understanding of the disease.”

Visit the society’s website (www.nationalmssociety.org) for more information and to join the effort to ensure a sustained investment in medical research for neurological diseases such as MS and Parkinson’s disease.