Clinicians should consider a diagnosis of West Nile Virus in patients with acute flaccid paralysis, particularly those who come from areas where WNV is endemic.

West Nile Virus (WNV) is a predominantly mosquito-borne illness that typically presents with a flu-like syndrome. A small percentage of patients can have more severe disease, manifesting as one of three presentations: acute flaccid paralysis, encephalitis, or meningitis. Ahead, we present an atypical case of neuroinvasive WNV infection distinguished by descending paralysis, which complicates the diagnosis.

A 51-year old female from New York City presented to the emergency department in September 2014 with complaints of fever, nausea, weakness, dizziness, difficulty ambulating, and visual disturbance, two weeks after chemotherapy for stage 2 gastric lymphoma that had been resected one month prior to admission.

In the emergency department, the patient was found to have low-grade fevers and orthostatic hypotension. Her review of systems was significant for blurred vision and headaches. Physical exam was unremarkable and no muscle weakness or respiratory distress was noted.

Shortly after admission, the patient developed fevers to 106.1F and tachycardia. Search for infectious etiology of symptoms was pursued, however no source was evident and fever of unknown origin work-up was initiated. There was no suggestion of any recent infection, though diagnostic studies were positive for H. pylori, and the patient did recall having sustained a bug bite in the weeks preceding admission.

On the third day of hospitalization, the patient developed dysarthria. MRI of the head at that time showed suspicion for cerebellar stroke, but no other abnormalities. Supportive care and broad-spectrum antibiotics were initiated. The patient developed slurred speech, lethargy, and right upper extremity weakness over the next couple of days, which progressed to bilateral upper extremity weakness, and then quadriplegia. On the eighth day, the patient was noted to be severely lethargic with respiratory distress and hypotension, requiring emergent intubation and transfer to the ICU. At this juncture, which represents a nadir in the patient’s clinical course, she exhibited no response to noxious stimuli, and no eye tracking, off sedation.

The patient was started on IVIG for presumed Guillain-Barre vs Bickerstaff encephalitis, while antibodies were pending. Initially, GQ1B IgG was borderline positive, suggesting a Guillain-Barre-like syndrome. (Repeat investigation, however, was negative.) The patient underwent three IVIG courses in total.

Lumbar puncture was initially negative for all studies. EEG showed generalized slowing but no epileptiform activity.

As the patient required mechanical ventilation for a period exceeding two weeks, a tracheostomy was placed, as well as a percutaneous endoscopic gastrostomy to facilitate feeding.

The patient continued to make gradual improvements in motor functioning, allowing for discharge to a rehabilitation facility after a 64-day hospital course. At the time of this writing, she was able to speak slowly, and was ambulatory with assistance. 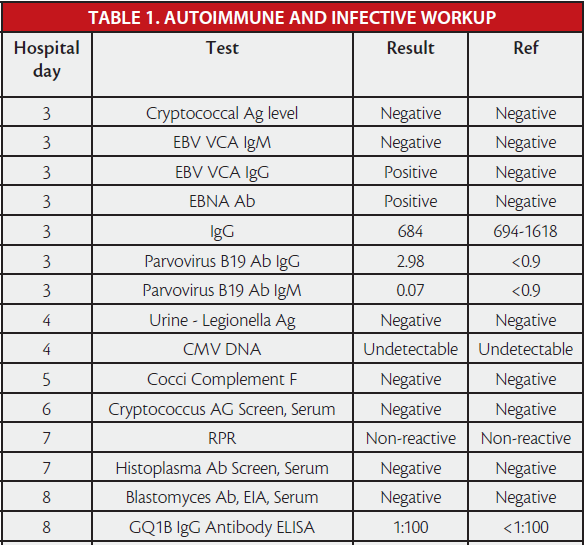 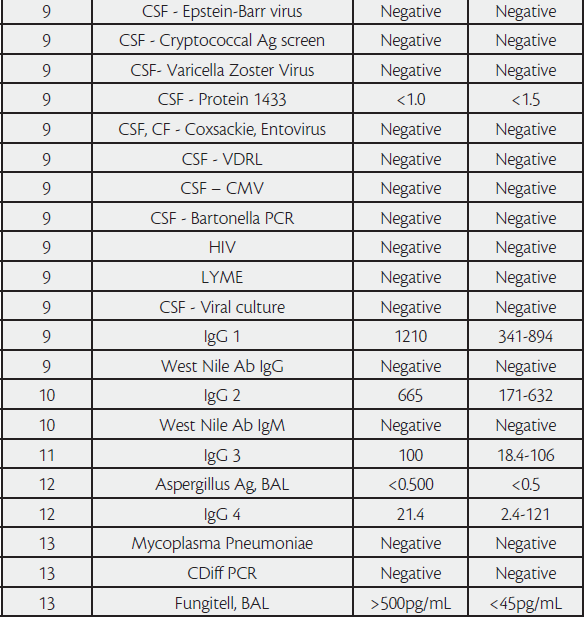 West Nile Virus is a flavivirus first identified in Africa in the 1930s with the main route of transmission to humans via a Culex mosquito bite. It first appeared in the western hemisphere in 1999 and is now considered endemic to the US.1 There are five lineages of WNV, with the most clinically important neuropathagen in lineage 1, clade 1a. Lineage 1, clade 1b and lineage 2 cause mostly self-limiting illnesses and the other lineages are even less well characterized in the literature.2 Since the other forms are mostly self-limited viral disease states, it is important to discuss the more pathologic states that can result from infection with WNV. Approximately one percent of those infected with WNV go on to develop neurologic manifestations. These manifestations include meningitis, encephalitis, and acute flaccid paralysis (AFP).3 We present the only reported case of WNV in Manhattan in 2014 causing neuroinvasive symptoms.

West Nile Virus infects approximately one and a half million people in the US.3 Of those infected, one in 140 individuals go on to develop neuroinvasive WNV infection, most commonly a nonspecific encephalitis. An even smaller percentage of patients develop AFP.2 According to the CDC, risk factors for developing WNV neuroinvasive disease include older age, male sex, hypertension, and diabetes.4 Both those with history of malignancy and subsequent chemotherapy as well as solid organ transplant recipients have been shown to have increased risk of neuroinvasive disease.5

Most of those infected with WNV are asymptomatic, however, those who develop symptoms most commonly present with fever, called West Nile Fever, which is indistinguishable from other viral syndromes. In addition to meningitis and encephalitis, neurologically WNV can cause AFP with many patterns of involvement ranging from monoplegia to quadriplegia, occasionally involving the brainstem, resulting in respiratory failure. Sensation is usually spared, however bowel and bladder function can be involved. Even rarer, some presentations include polyradiculitis, a Guillain-Barre like syndrome (GBS), brachial plexitis or dysautonomia secondary to involvement of the sympathetic neurons. Recovery from neurologic involvement, especially AFP, is usually incomplete.2 The case we present shows a descending flaccid paralysis, first involving the upper extremities and eventually resulting in quadriplegia and respiratory failure. 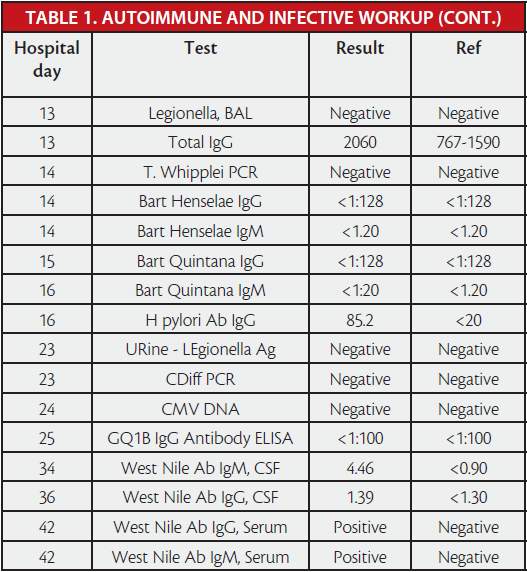 If suspicious for WNV, a serum WNV IgM antibody should be sent. This may not be detected early in the disease course or in those with only WNV fever. Seroconversion of the IgM antibody usually occurs four to 10 days after symptom onset.9 CSF studies are critical in determining if neurologic symptoms are due to WNV versus other etiologies. In patients with WNV involving the CNS, the CSF usually has an elevated protein and lymphocytic predominance, except in early infections when neutrophils may predominate. Cytology may show plasmacytoid lymphocytes or large monocytic cells which may resemble Mollaret cells.8 WNV IgM should also be sent from the CSF but it is important to note that IgM antibodies may persist for up to six months or longer.10 Our patient initially had negative serum WNV antibodies, which on repeat testing several weeks later were positive in both the serum and CSF consistent with the pattern described above.

Neuroimaging studies may help clinicians in raising suspicion for WNV encephalitis. MRI is often used, however, the findings are not necessarily diagnostic, and even in cases of severe encephalitis, the MRI may be normal. Like the antibodies, abnormal imaging findings may not be apparent until several weeks after the onset of illness. In those with positive MRI findings, the most common characteristics are bilateral signal abnormalities located in the basal ganglia, thalami, brain stem, ventral horns and spinal cord. These findings are nonspecific and may be seen in other forms of encephalitis.11,12 EEG studies may show generalized slowing and triphasic sharp waves, with prominence over the anterior regions. This finding also is nonspecific, but it has been suggested that any patient with encephalitis and an EEG showing anterior slowing should have WNV included on their differential.11,13 Our patient had subtle T2 and FLAIR symmetric hyperintensities in the bilateral basal ganglia, thalami, substantia nigra and cortical spinal tracts. The EEG study was consistent with diffuse encephalopathy.

Impaired immunity, as seen in our case, may play a role in certain populations becoming symptomatic from WNV. For instance, Honig and Karussis presented a case of delayed-onset flaccid paralysis likely secondary to WNV reactivation following treatment with rituximab. They propose that the virus can be reactivated due to a delayed autoimmune process induced by recovering humoral immunity after being treated with the monoclonal antibody. A chronic infection or delayed neuroinvasion could explain the delayed WNV-poliomyelitis. Given that they found that WNV-ribonucleic acid may be detected in the urine of patients up to seven years following infection helps support this point. Despite the presence of the RNA in the urine, growth from these isolates was never obtained.6 An additional hypothesis for the polyneuropathy seen in their patients include Acute Inflammatory Demyelinating Polyneuropathy (AIDP) related to the treatment with rituximab itself. Astor, et al. also presented a case of neuroinvasive WNV in a patient who received a solid organ transplant and was subsequently placed on rituximab therapy for organ rejection.7 Our patient had received rituximab therapy for treatment of gastric lymphoma, with the most recent treatment two weeks prior to her presentation. Although the occurrence of the infection cannot with certainty be as a result of the treatment, the link between our case and the others in the literature is important to note. 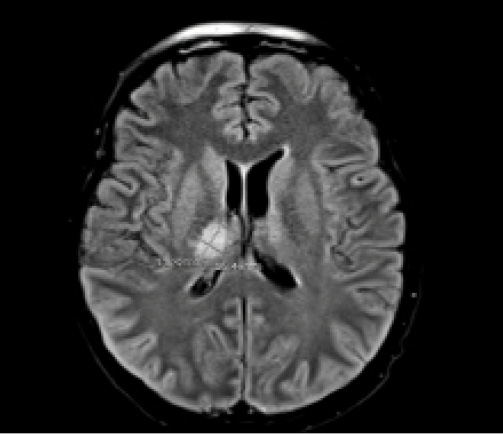 There is no definitive treatment for WNV and supportive care is the mainstay of therapy.

Encephalitis caused by WNV has high morbidity, which may stem from inflammation caused by the disease process. Sirvastava, et al. studied the use of IVIG to treat the inflammatory effects causing encephalitis in patients with WNV. They found that “IVIG and pooled human WNV convalescent sera (WNV-IVIG) inhibited development of lethal WNE by suppressing CNS infiltration by CD45high leukocytes. Pathogenic Ly6Chigh CD11b+ monocytes were the major infiltrating subset in the CNS of infected control mice, whereas IVIG profoundly reduced infiltration of these pathogenic Ly6Chigh monocytes into the CNS of infected mice.”14

Dampening the effect the virus may have on the nervous system is key to recovery. Our patient received both IVIG and plasmapheresis with notable clinical improvement and partial neurological recovery, which is still ongoing.

Despite having no known specific treatment currently available, and vaccines only in phase 1 clinical trials, clinicians must keep WNV on their differentials especially in those with recent mosquito exposure or in those who are immunocompromised in order to reach a correct diagnosis. Supportive therapy and IVIG can dampen the burden the virus takes on the body—especially the neurologic system—and can help patients begin their road to recovery. Any patient with a broad range of neurologic symptoms, including AFP, with no known cause could benefit from a workup for WNV. n

Recreational Marijuana and Cognitive Decline: What Every Clinical Neurologist Needs To Know