Dehydration Linked to Worsening Stroke Conditions. People who are well hydrated at the time of their stroke have a greater chance of better recovery compared to people who are dehydrated, research from Johns Hopkins suggests.

After evaluating 168 ischemic stroke patients, researchers found almost half of them were dehydrated when admitted to the hospital for stroke.

Mobile Stroke Units Improve Response Times. Mobile Stroke Treatment Units are saving critical minutes in the diagnosis and treatment of stroke patients, according to two new studies presented by researchers from the Cleveland Clinic and the University of Texas, respectively.

MSTUs are specialized ambulances staffed with a nurse, paramedic, emergency personnel and CT technologist. The unit also contains lab testing equipment and a CT scanner, which is required to diagnose the type of stroke. A stroke physician at the main hospital evaluated each patient via telemedicine and a neuroradiologist remotely assessed CT images. Two-way video conferencing allowed communication with the patient, family and stroke experts.

Researchers from the Cleveland Clinic reported on the evaluation and treatment in the first three weeks of implementation of the MSTU in Cleveland as compared to a control group of patients brought to the emergency department via traditional ambulance in the preceding three months. They measured the time from call dispatch from emergency medical service (time of alarm) to the time a CT was completed and clot-busting treatment with tPA was started.

Twenty-three patients were treated in the MSTU and 34 in the emergency room. There were no significant differences in age or gender between the groups. Researchers found:

In addition, researchers noted the rate of clot-buster treatment was much higher in the MSTU than in the hospitals (26 percent vs. 14 percent). This also was much higher than the national average of 3 percent to 8 percent.

Stroke Survivors More Likely to Make Dangerous Driving Errors. Drivers who have had recent strokes are more likely than drivers who have not had strokes to make errors during complex driving tasks, according to a small Canadian study.

“Current guidelines recommend that patients should refrain from driving for a minimum of one month after stroke. However, many patients resume driving within the one-month period after stroke, and few patients report receiving driving advice from a physician immediately post-stroke,” said Megan A. Hird, B.Sc., lead author of one of the abstracts and a master's student at University of Toronto doing research at St. Michael's Hospital, Toronto, Canada.

Hird and colleagues (abstract TP123) compared the driving performance of 10 mild ischemic stroke patients, within seven days of a stroke, to 10 people similar in age and education who had not had stroke. Using driving simulation technology, participants completed several driving tasks, from routine right and left turns to more demanding left turns with traffic, where most accidents occur, and a bus following task, requiring sustained attention.

They found stroke survivors committed more than twice as many driving errors. Additionally, stroke survivors had more errors during left turns with traffic and were almost four times more likely to make driving mistakes during the bus following task.

Researchers studied whether low blood levels of 25-hydroxyvitamin D, a marker of vitamin D status, is predictive of ischemic stroke severity and poor health after stroke in 96 stroke patients treated between January 2013 and January 2014 at a US hospital.

Overall, patients who had low vitamin D levels –defined as less than 30 nanograms per milliliter (ng/mL) – had about two-times larger areas of dead tissue resulting from obstruction of the blood supply compared to patients with normal vitamin D levels.

This association was similar among patients who suffered lacunar strokes (in which the small, intricate arteries of the brain are affected) and patients with non-lacunar strokes (such as those caused by carotid disease or by a clot that originated elsewhere in the body).

For each 10ng/mL reduction in vitamin D level, the chance for healthy recovery in the three months following stroke decreased by almost half, regardless of the patient's age or initial stroke severity.

Parents Experience PTSD After Child's Stroke. Parents of children who have suffered a stroke can experience post-traumatic stress disorder (PTSD), and the children show signs of clinical anxiety, factors that could interfere with treatment and outcomes, according to research presented at the American Stroke Association's International Stroke Conference 2015.

A preliminary study conducted at Boston Children's Hospital examined 10 fathers, 23 mothers of children ranging in ages from infant to teenager. It also enrolled 9 pediatric stroke patients' ages 7-18 years. The children had experienced their strokes in either 2013 or 2014.

Fifty-five percent of the parents met at least one of the PTSD criteria and 24 percent met all the criteria for PTSD. While PTSD was not seen among the children, 22 percent had clinically significant levels of anxiety.

“Our concern is that PTSD in parents of a child with stroke or pediatric stroke patients experiencing anxiety may have a harder time complying with therapy, which could affect health outcomes of the child,” said Laura Lehman, MD, lead researcher and neurologist at Boston Children's Hospital. “The data are preliminary but we could use this information to screen families for potential PTSD and emotional problems after stroke so that we can plan more targeted interventions, such as support groups, and determine who is at risk. We want to ensure that PTSD or other emotional problems do not interfere with the child's recovery.”

New Drug Candidate for Alzheimer's to Begin Trials This Year

Alkermes formally introduced a new drug candidate for the treatment of agitation in patients with Alzheimer's disease, major depressive disorder (MDD) and other central nervous system (CNS) indications. Called ALKS 7119, Alkermes has successfully completed preclinical development and expects to initiate the first clinical study of the therapy in the third quarter of 2015.

“Based on results and observations to date, we believe that the multivalent mechanism of ALKS 7119 has the potential to impact a range of CNS diseases, said Elliot Ehrich, MD, Chief Medical Officer of Alkermes. “We will begin with addressing agitation associated with Alzheimer's disease and look forward to beginning our clinical program later this year.”

ALKS 7119 has a multivalent mechanism of action that acts on key receptors in the brain involved in several CNS diseases, including agitation in patients with Alzheimer's disease, MDD and others. Alkermes intends to file an Investigational New Drug (IND) application with the U.S. Food and Drug Administration (FDA) in the second quarter and begin clinical trials in the third quarter of 2015.

Teva released positive results from a Phase IIb study evaluating the efficacy, safety and tolerability of two doses of subcutaneous TEV-48125, an investigational anti-calcitonin gene-related peptide (CGRP) monoclonal antibody for the prevention of chronic migraine (migraine with headaches on at least 15 days per month).

The study compared two active arms of different doses of TEV-48125, administered as a subcutaneous injection, once a month for three months, against placebo. Results demonstrated that both tested doses of TEV-48125 achieved the primary and secondary efficacy endpoints of the study at one and three months. The data revealed a significant and clinically relevant reduction in both the number of monthly cumulative headache hours, and the number of headache days of at least moderate severity, relative to baseline.

In this study no important safety or tolerability concerns were identified. The adverse event profile for TEV-48125 appeared similar to placebo and supportive of previous Phase I safety data. Of the adverse events reported, mild, transient injection site discomfort and redness was infrequent but higher than that observed in the placebo group. No serious treatment-related adverse events were seen.

Cerebral Blood Flow as a Possible Marker for Concussion Outcomes

A new imaging study suggests that cerebral blood flow recovery in the brain could be a biomarker of outcomes in patients following concussion, according to a study published online by JAMA Neurology.

Most of the 3.8 million sports-related traumatic brain injuries (TBIs) that occur annually are concussions. Developing methods to diagnose the presence and severity of concussions is imperative. Reduced cerebral blood flow (CBF) is a marker of concussion severity in animal models, according to the study background.

Timothy B. Meier, PhD, of the Mind Research Network/Lovelace Biomedical and Environmental Research Institute, Albuquerque, NM, and coauthors looked at the recovery of CBF in a group of 44 college football players and compared the course of CBF recovery with that of cognitive and behavioral symptoms. The study was done between March 2012 and December 2013.

Of the 44 players, 17 were concussed and had imaging performed one day, one week and one month postconcussion. The study also included 27 healthy football players as the control group.

The study results indicate that both cognitive and neuropsychiatric symptoms at one day postinjury resolved at either one week postinjury or one month postinjury. The imaging data suggested CBF recovery in parts of the brain. The authors also found that CBF in the dorsal midinsular cortex part of the brain was decreased at one month postconcussion in slower-to-recover athletes and in athletes with the most severe initial psychiatric symptoms.

In addition, the degree of low-contrast visual deficiency correlated with PD severity, suggesting that such visual testing may provide insights for the physician in the diagnosis and treatment of PD. To provide an easy-to-use screening tool for physicians, the investigators have developed an iPad-based application that can replace the traditional paper charts used in normal eye testing.

Thirty-two patients with PD and 71 control subjects were studied. All subjects received a neurological examination, which included the Unified Parkinson's Disease Rating Scale (UPDRS), and vision testing using the Variable Contrast Acuity Chart displayed on an Apple iPad 2. Usual corrective lenses were worn by subjects that required them.

Testing was done at high contrast (black letters on a white background) and at 2.5% contrast (grey on white) at distances of 40cm and 2m. The chart design and testing protocol were based on the Bailey-Lovie and Early Treatment of Diabetic Retinopathy Study (EDTRS) visual acuity tests that are the standards in ophthalmology clinical trials. Using a scale of visual acuity based on the number of letters correctly identified, PD patients could see about 10% fewer letters than control subjects in the low-contrast tests at either distance and in the high-contrast tests at 2m. There was no statistically significant difference between PD and control subjects in the high-contrast testing at 40cm. n 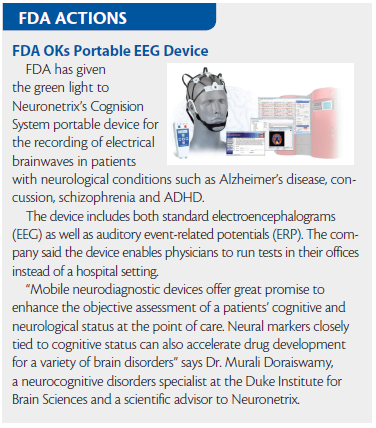 Dementia with Lewy Bodies: In the News and in the Clinic