Sleep medicine's newest addition has a novel mechanism and an undecided future.

In the early 2000s, investment analysts anticipated a boom in the insomnia drug market.1 Indiplon and ramelteon (Rozerem) were on the verge of release, and Sepracor was testing eszopiclone, a nonbenzodiazepine hypnotic agent that a glowing “luna moth” would introduce to the public as Lunesta in one of the most memorable pharmaceutical ad campaigns in recent history.

Despite Lunesta’s success and Rozerem’s approval, the anticipated boom was barely audible. Indiplon fizzled out and the FDA made more sleep medicine headlines for rolling back dosing than rolling out approvals. All of which makes their recent approval of suvorexant (Belsomra) more intriguing: the oral drug is a substantially different product.

New to pharmacy shelves in early 2015, Belsomra is indicated for the treatment of insomnia characterized by difficulties with sleep onset and/or sleep maintenance in four different strengths: 5, 10, 15, and 20 milligrams; it is contraindicated in patients with narcolepsy. Its novel mechanism is clear, but where it fits in is less so.

Belsomra is an orexin receptor antagonist, making it the first approved drug of its type. Pharmacological approaches to the treatment of insomnia have previously included GABA-A receptor agonists (for example, the benzodiazepine temazepam and the non-benzodiazepine zolpidem), melatonin receptor agonists (ramelteon), and histamine H1 receptor antagonists (doxepin).2 The discovery that orexin was involved with sleep was prompted by studies of narcolepsy; it is estimated 90 percent of people with narcolepsy are orexin-deficient.3

The orexin peptides A and B bind selectively to the orexin 1 receptor (OX1R) and orexin 2 receptor (OX2R), and drugs that bind to both OX1R and OX2R are referred to as dual orexin receptor antagonists (DORAs).2

“It works like nothing before it, by antagonizing the hypocretin neurotransmitter system, which has the function of promoting altertness,” said Erik K. St. Louis, MD, Head of Sleep Neurology at the Mayo Clinic and Foundation and Associate Professor of Neurology at the Mayo Clinic College of Medicine. “Belsomra therefore works against alertness so it promotes sleep by that novel mechanism. No previously marketed drug has done this.”

The FDA considered Belsomra effective after it was studied in three clinical trials involving more than 500 participants. In the studies, patients taking the drug fell asleep faster and spent less time awake during the remainder of the night compared to people taking placebo.4 The Agency noted Belsomra was not compared to other drugs approved to treat insomnia, so it is unknown if there are differences in safety or effectiveness between Belsomra and other insomnia medications.

In the third study, a one-month crossover, Belsomra 10mg and 20mg were superior to placebo for sleep latency and sleep maintenance in non-elderly adults, as assessed objectively by polysomnography. 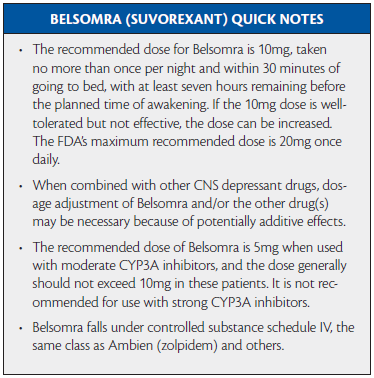 At doses of 15 or 20mg, the incidence of somnolence was higher in females (8 percent) than in males (3 percent). Data from two studies showed several adverse reactions occurred in women at an incidence of at least twice that in men: headache, abnormal dreams, dry mouth, cough, and upper respiratory tract infection. Further, there is evidence of a dose relationship for many of the adverse reactions, particularly for certain CNS reactions.

Many in the sleep community expected Belsomra to receive FDA approval in the summer of 2013, and perhaps, at a different dose.

Merck’s initial proposal to market up to 40mg was scuttled over concerns of next-day somnolence, including how those effects impacted driving ability. Studies showed impaired ability on next-morning driving performance 9 hours after dosing, and patients using the 20mg strength should be cautioned against next-day driving or activities requiring full mental alertness.5

The issues also came during a time the Agency heightened their focus on the next morning impairment of the so-called “z drugs” (Ambien, Sonata, etc.) and lowered dosing recommendations. Data from clinical trials and driving simulation studies prompted the FDA “to better characterize the risk of driving impairment caused by specific blood levels of zolpidem and to recognize the increased risk of driving-impairing blood levels of zolpidem in women.”6 In May of 2014, the Agency also decreased the recommended starting dose of Lunesta to 1mg at bedtime. A study of Lunesta found that the previously recommended dose of 3mg can cause impairment to driving skills, memory, and coordination that can last more than 11 hours after receiving an evening dose.7

“The FDA is, I think, rather nervous about a new sleep drug, given the recent reports of residual drowsiness in women on zolpidem, and possibly some other areas such as mood disorders and memory problems linked to some sleep drugs,” said Carl Bazil, MD, PhD, Director of Division of Epilepsy and Sleep and Caitlin Tynan Doyle Professor of Neurology at Columbia. “I have questions about the latter, but I think that’s why the FDA is being more cautious about warnings, not necessarily that this is a more powerful, or dangerous, drug.”

The final rule, of course, is with the FDA: officials at an advisory committee meeting in May 2013 said there was little evidence to show Belsomra was more effective at higher doses and considerable evidence to show it was less safe.8

At a presentation at the Barclays Global Healthcare Conference, CFO Rob Davis said Belsomra has surpassed 1,000 weekly prescriptions since its Feb. 5 launch in the US. The product is currently rolling out in Japan, which puts Belsomra’s potential market at some 2 billion doses per year, combined. “Obviously,” noted Tracy Staton from Fierce PharmaMarketing, “Belsomra has a long way to go.”9

“Its mechanism is probably the most intriguing point,” Dr. St. Louis said. “I will be interested to determine if it may be a drug of choice for patients who have previously experienced amnestic NREM parasomnias, i.e., sleep walking or sleep eating,” he said. “On the other hand, in some patients who also have hypersomnia symptoms, there may be a concern of possible adverse effect/reaction of precipitating cataplexy if the patient has previously undiagnosed narcolepsy, so there is a note of caution to perhaps be cautious with its use in that subset of patients—i.e., insomnia with concurrent hypersomnia.”

Although the studies do show it promotes sleep, Dr. Bazil said he is taking a wait-and-see approach because of the lack of head-to-head studies against existing drugs like Ambien. “I suspect it will initially be used where existing treatments don’t work or have problems; as we get more real world experience it may become more popular.”

Merck noted in a presentation that 30 percent of patients thus far are “continuous treaters” who were seeking new alternatives.10 Indeed, Dr. St. Louis believes it could possibly be a replacement for patients who have built up a tolerance to the “z drug” class. “I’ve anecdotally already had a couple of patient successes, at least short term, with very brittle insomnia or intolerance to other traditional agents,” he said. “That said, our paradigm now in chronic insomnia is mostly to emphasize behavioral therapies, such as cognitive behavioral therapy and sleep hygiene education.” n