The Penalty Era: The Next Phase in Medicine

New proposed rule changes spell an uncertain future for the Meaningful Use program.

After years of uncertainty and adjustments to the Meaningful Use incentive programs for adoption and use of Electronic Health Records (EHRs), the Centers of Medicare and Medicaid Services (CMS) is once again making changes to the program. Following disappointing numbers for Stage 1 enrollees and expected low numbers for Stage 2, CMS has proposed new changes for the upcoming Stage 3, several of which are notable. For starters, the number of qualifying measures required to meet Meaningful Use standards has been reduced to 10. Additionally, CMS overhauled the schedule to ensure that all users are automatically enrolled in Stage 3 by 2018. Also starting in 2018, to qualify for Stage 3, users must demonstrate Meaningful Use all year long.

The moves signal a concession on the part of CMS and perhaps even an indirect admission that it rushed a program when a large majority of practicing physicians were not ready to switch to electronic health records. Yet, while CMS is seemingly kicking the can down the road, there will be no escaping the numbers for Stage 2 later this year. Last year, fewer than 15,000 out of a total of 500,000 physicians went on to stage 2. And if previous years are any indication, we can expect another 10 to 15 percent drop-off rate this year.

The Real Motivations Behind Meaningful Use

Considering how the incentive program was structured, with most of the incentive money frontloaded toward completion of Stage 1, it’s hardly a surprise to see such major drop-off in the ensuing stages. But as CMS prepares for the Stage 2 numbers, the real story will be how they respond. Speculation has persisted that CMS would scrap the current version of Stage 3 and attempt to build a new version that’s more favorable to physicians. This wouldn’t please all users; in fact it may cause more ire. But no matter what course of action CMS settles on, it’s pretty clear that the Federal government will need to rethink its position on EHRs. 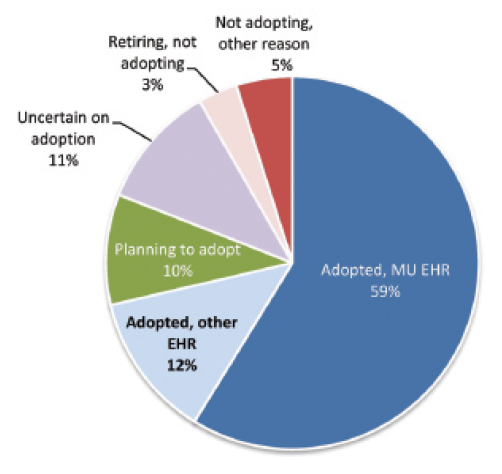 But when you consider the government’s broader goals, we may be able to better understand its machinations and what it might do going forward. It’s clear, for example, that Stage 1 was designed to compel physicians to buy and use an EHR. In this regard, the Meaningful Use program should be regarded as a success. Adoption rates for EHRs have gone from percentages in the teens to over 50 percent of practicing US physicians within five years. It was generic and broad at the beginning, which essentially allowed for the largest possible pool of physicians to participate. Stage 2 and Stage 3, however, more strictly require communication with patients and create standards for how the systems can be used to take care of patients. At this point, many physicians opted out, presumably due to the stricter requirements and the smaller payout. But perhaps physicians aren’t necessarily the focus of the next phase of HIT adoption. 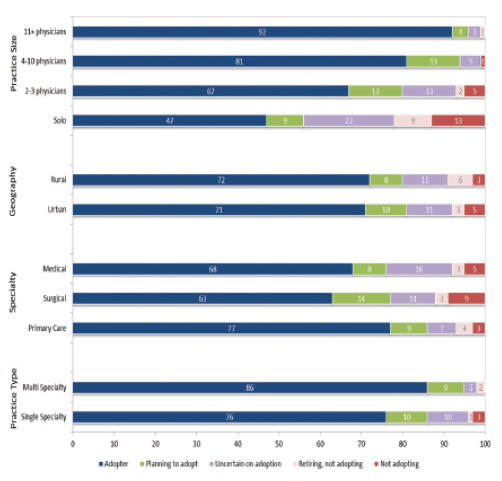 If the first phase in the program was to get EHRs in the hands of doctors, the next step arguably is more focused on moving toward interoperability. The way to do that, presumably, is to push EHR vendors to adopt certain interface standards. After Stage 1 of the program, CMS has unveiled rules that have forced vendors to make significant changes in their systems to accommodate the increasing demands.

The proverbial “holy grail” in HIT is interoperability. The government wants EHRs to work like iPhones. For example, if someone doesn’t like Apple’s Maps app, they can delete the app and use Google Maps as their navigator. Likewise, when Apple releases a new operating system, the system can be designed to work with whatever system the user operates. However, at this point, physicians cannot decide to get a different electronic prescribing module. Moreover, if one vendor’s patient portal is lacking, physicians are not able to simply opt out to use another version.

One problem is that EHR vendors do not have the resources of other technology companies. But the other major roadblock is that individual companies are not required to release their application program interface (API). Since the APIs for EHR systems are proprietary, vendors understandably do not want to reveal their “back end.” In other words, if a company were required to release its API, other vendors would simply adopt what the most successful vendor has designed. But until the government requires vendors to release these proprietary technologies in some capacity and allow the systems to communicate through a third party intermediary, true interoperability is not possible.

These nuances will need to be addressed if the government expects EHR vendors to continue developing at high speeds. If the new ruling from CMS were to require EHR vendors to make their APIs public, a developer like Google could find a way to bridge every system.

The government’s end game with EHRs is to facilitate interoperability among EHRs so that they can access data in a unified manner. But until certified vendors are forced to loosen their grips and release their APIs, this is sure not to happen. With the many changes we’ve already seen to the EHR incentive program, it’s certainly within the realm of possibility that CMS might do just that.

Although physicians have been opting out of the later stages of the Meaningful Use program, the crucial factor here is that we’ve entered a new phase in medicine: The Penalty Era.

This year marks the first in which physicians are penalized on their Medicare reimbursements for not being a meaningful user of an EHR. Right now, the penalty is relatively small and may not make much of an impact. But with each passing year that penalty will grow. Those who are older may decide to retire. For the rest of us, we must decide our threshold for the amount we’re penalized before we comply with standards.

The government will continue to tout its good numbers on the road to larger scale interoperability, but it’s important to consider that these numbers will be slanted toward large institutions that have the structural support to withstand the regulatory process. But what about small group practice and solo providers? Will they be able to keep up with the increasing demands of the government?

Thus, as medicine becomes more institutionalized, the actual end game emerging in view may well be the demise of private practice.n

Mark Kaufmann, MD is an Health IT expert and regular contributor on EHR issues to Practical Dermatology® magazine, where this article first appeared.