There are several differences among the AAN and Zurich Consensus Statement concussion guidelines.

Over the past four years almost every specialty organization that evaluates and treats athletes with concussion has released guidelines/position statements. They include: the American Medical Society for Sports Medicine (2012), Athletic Trainers (2014), American Academy of Pediatrics (2010), Zurich Consensus Statement (2013), and the American Academy of Neurology (2010) (2013). In addition, the American College of Occupational and Environmental Medicine currently have evidence-based guidelines in the works which will apply to many professional athletes.

In addition to these groups the Institute of Medicine and the National Research Council released an extensive report on sports-related concussions in children and teens in October 2013. Sadly, this committee did not contain a single neurologists and the AAN issued a statement outlining this critical omission. All of the aforementioned guidelines/position statements address definition, signs, and symptoms, along with removal and return to play. Despite a considerable overlap in committee members and authors, subtle and in some cases glaring differences exist.

The AAN and Zurich Consensus Statement are still the most widely used and referenced of all the guidelines. The AAN guidelines are arguably the most comprehensive ever written. Part research paper, part guidelines, they are intended replace the 1997 guidelines which were based on a on an outdated grading system, which in itself was based on loss of consciousness (LOC), which occurs in less than 10 percent of athletes. Furthermore, an AAN member survey demonstrated variability in care, provider experience, and training.1 This coupled with an explosion of published reports related to sports concussion and mild traumatic brain injury (TBI) had resulted in uncertainty and inconsistency in the management on concussed athletes.

Initial discussions had the update being drafted exclusively by neurologists, however after some backlash from other medical specialties over the AAN position statement on concussion in sports, 1the AAN and sports neurology executive committees (myself included) recommended a multi-disciplinary panel made up of members from each subspecialty that deals with concussion. The committee looked at evidence published between 1955 and June 2012 via independent literature search encompassing thousands of studies. Articles were selected and rated independently by two authors. The panel formulated recommendations on the basis of multiple variables.

An AAN member survey demonstrated variability in care, provider experience, and training. Unlike the AAN concussion guidelines, the Zurich Consensus Statement attempts to look at sports concussion from a clinical perspective.

When looking at the evidence the panel found males suffer more concussions then females, which is a result of more participants, however females appear to have a higher risk. US Football and Australian Rugby have the highest risk of concussion for males and soccer for females. Protective equipment including mouth guards, do not protect against concussion and there was no data to show that soccer headgear protects. At the time there was insufficient evidence that one football helmet is better than another. However since the release of the study of our group the Dumas group at Virginia Tech have shown differences amongst helmets.2 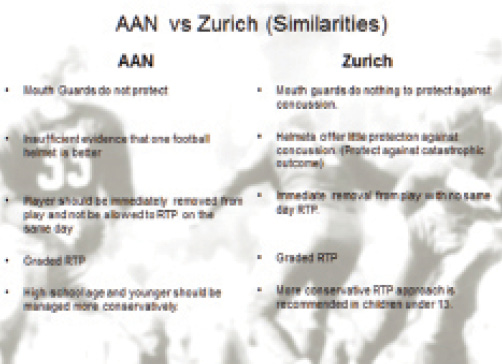 When testing athletes for suspected concussion a combination of tests are more likely to improve diagnostic accuracy. There was Class I evidence demonstrating gait stability and dual task testing may identify athletes with early concussive symptoms. There was strong evidence that a history of concussion places the athlete at risk for more severe and prolonged symptoms as well as a risk for recurrent concussion (with this risk being highest in the first 10 days). In addition, younger athletes are likely to take longer to recover; a mass greater than 27kg/m2 and training less than three hours per week increase the risk of concussion. 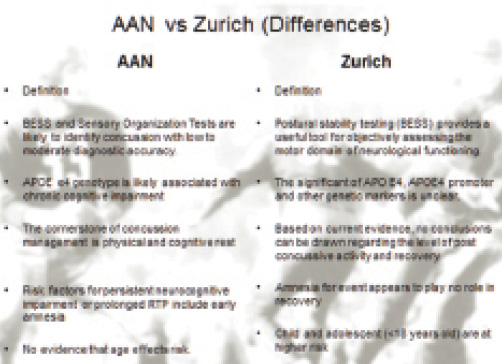 Unlike the AAN guidelines the Zurich Consensus Statement attempts to look at sports concussion from a clinical perspective. The paper is updated every four years and, similar to the AAN guidelines, the panel consists of various subspecialties including three neurologists. New for 2012 was an update on sideline and office evaluation, new management recommendations, a statement on CTE, and an updated sideline evaluation tool, e.g. SCAT 3, (including a separate youth version).

The definition was updated to include sports concussion as a subset of mild traumatic brain injury though the committee did not commit to using the terms synonymously. When looking at diagnostic testing the consensus was that there is no perfect diagnostic test or marker that clinicians can rely on for an immediate diagnosis of concussion. Baseline computerized neuropsychological testing was not felt to be a requirement in the assessment of the concussed athlete, with little clinical evidence supporting its use. This is quite surprising, as computerized neuropsychological testing is commonly used by almost all professional and college teams, and many high schools and other amateur sports organizations.

Furthermore, the committee recommended that neuropsychological assessment in general never be used as the sole means in evaluating an athlete with concussion and returning them to play. When looking at management, physical and cognitive rest was recommended until the acute symptoms resolve, followed by a graded program of exertion prior to medical clearance and return to play. This recommendation is contrary to the current practice of physical and cognitive activity to tolerance, and the authors concussion management program, which utilizes early aggressive abortive treatment in patients with post-traumatic headache. If symptoms do not resolve by 10 days the athlete should be evaluated and managed using a multidisciplinary approach by healthcare providers experienced in the management of concussion symptoms.

Although the committee kept in place the graded return to protocol synonymous with the position statement, they recommended that children under age 13 not begin a return to play protocol until they are back at school. And because of the different physiological response, it is appropriate to extend the amount of time of asymptomatic rest and/or the length of the graded exertion in children and adolescents. Perhaps the most important statement from the meeting was the following: “in management and [return to play], decisions remain in the realm of clinical judgment and on an individualized basis,” i.e., no more of the “one size fits all” approach.

Not surprising, there are many similarities between the AAN Guidelines and the Zurich Consensus Statement (Figure 1). There are also some interesting differences including: a disagreement on the role of APOE in chronic cognitive impairment; complete disagreement on the role of post-concussion amnesia; and recovery as well as age and concussion risk. Finally and as outlined above there were different opinions on cognitive rest in recovery. (Figure 2)

Moving forward and due to an explosion of research, guidelines are going to become more evidence based. As neurologists become more involved, more detailed recommendations about management should follow. There will likely be increased focus on the role of sub-concussive hits, appropriate practice and play in children and perhaps even higher level amateur athletes (e.g. limited contact, teaching proper hitting techniques, proper amount of practice time, and rule changes), as well as recommendations on a gradual return to full cognitive activity (e.g. school and work) and a continued focus on education. n

Francis X. Conidi, DO, a sports neurologist/headache specialist, is Director of the Florida Center for Headache and Sports Neurology, a tertiary center dedicated to treatment of chronic/refractory headache disorders and sports related concussion and sports related neurological disorders. He is immediate Vice Chair of the AAN Sports Neurology Section and co-author of the AAN’s position statement on concussion in sports.

Find more articles by Dr. Conidi on TBI and CTE online at PracticalNeurology.com.

Concussion Management: What to Know Now

Epilepsy and Depression
Social Determinants of Health Interact With Epilepsy

Ghrelin Advances to a Phase 2 Trial for Concussion Treatment