As new autoantibodies are described, the field of autoimmune movement disorders is ever expanding.

Autoimmune neurology is ever expanding as new autoantibodies are discovered. In this review, we discuss some of the recently described autoantibodies associated with abnormal movements and their clinical syndromes (Table). 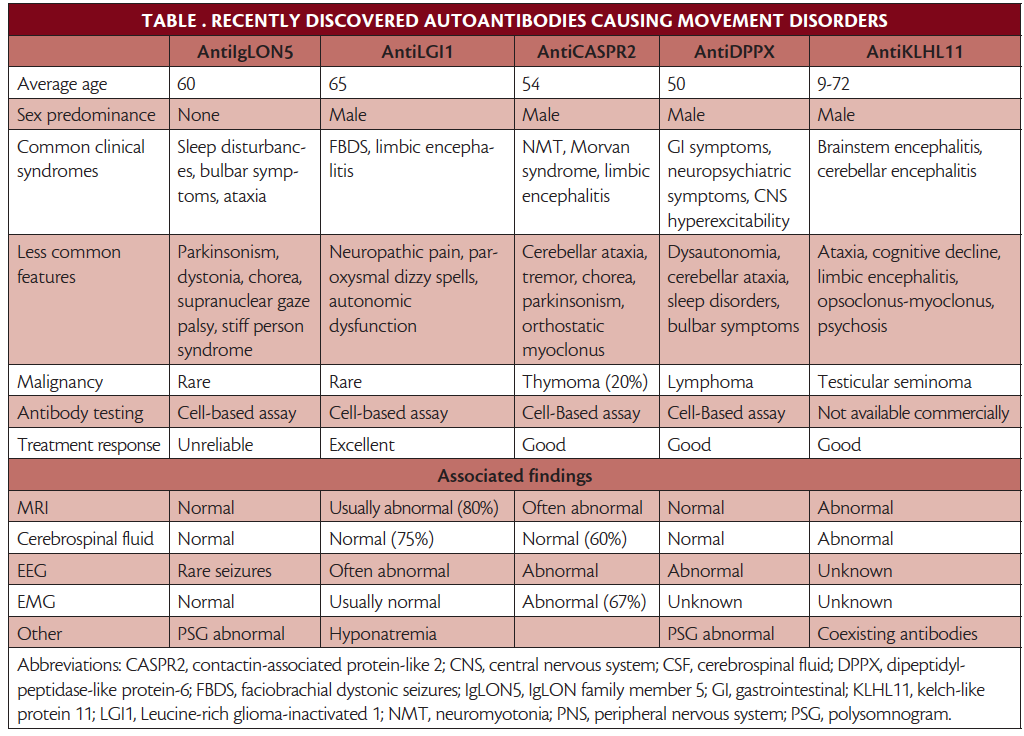 IgLON5 is a widely distributed adhesion molecule in the central nervous system (CNS) with unknown exact function. Antibodies to IgLON5 were first identified in a cohort of 8 individuals who had abnormal sleep movements and obstructive sleep apnea (OSA).1 Although most autoimmune neurologic disorders are characterized by a subacute onset and rapid symptom progression, antiIgLON5-associated disease has a more insidious onset with slow chronic progression (2-12 years from symptom onset to diagnosis). Affected individuals are in their seventh decade at the time of presentation. Sleep disturbances are the most prominent feature of the disease1 and include abnormal limb movements and vocalizations during sleep, complex gestures during sleep, snoring, apneas, insomnia, and daytime somnolence. Other features include gait instability, dysarthria, and dysphagia. Associated movement disorders include parkinsonism, ataxia, dystonia, chorea, and myoclonus. Some individuals experience gait instability along with supranuclear gaze palsies resembling progressive supranuclear palsy (PSP).2 A stiff-person syndrome phenotype has also been reported (See Stiff-Person Syndrome in this issue).3

AntiIgLON5-associated disease is commonly associated with human leukocyte markers HLA-DRB1*10:01 and HLA-DQB1*05:01.2 A definite relationship with malignancy or other autoimmune diseases is not established yet, but some with the disease have had adenocarcinoma and Hodgkin lymphoma.2 Screening for malignancy when IgLON5-associated disease is present is appropriate. Brain MRI, EEG, cerebrospinal fluid (CSF) analysis, and EMG are usually unremarkable. Cerebral and cerebellar atrophy is sometimes found on imaging. Polysomnography has demonstrated OSA, complex nonrapid eye movement (nonREM) parasomnia, and stridor during sleep. Rarely, EEG has demonstrated a seizure.3 Some individuals have had mild CSF protein elevations. Commercial testing for antiIgLON5 is available for serum and CSF. AntiIgLON5 are predominantly IgG4 or IgG1.2 Neuropathology demonstrates accumulation of hyperphosphorylated tau, preferentially in the hypothalamus and brainstem tegmental nuclei with a severity gradient from the hypothalamus to the upper cervical cord. There is neuronal loss and gliosis without inflammation.4

AntiIgLON5-associated disease is unique with features of autoimmunity and neurodegeneration. Whether development of the autoantibodies is a primary or secondary event in the pathophysiology of this disease is yet unknown. If antibodies are inciting neurodegeneration, early diagnosis and early initiation of immunotherapies will be important.

Antibodies to voltage-gated potassium channels (VGKC) were initially described in association with acquired neuromyotonia (NMT) responsive to immunotherapy, (Isaacs syndrome). This was expanded in recognition of Morvan syndrome, also associated with antiVGKC and characterized by cognitive impairments, NMT, sleep, autonomic dysfunction, and limbic encephalitis. Antibodies to leucine-rich glioma-inactivated 1 (LGI1) and contactin-associated protein-like 2 (CASPR2), which are associated with the VGKC complex, were identified as the molecular targets mediating these phenotypes, which is supported by the extracellular localization and high rates of phenotypic response to immunotherapy.5,6

LGI1 composes an inhibitory pathway linking presynaptic VGKC and the postsynaptic α-amino-3-hydroxy-5-methyl-4-isoxazolepropionic acid (AMPA) receptor. Predominantly expressed in the hippocampus and temporal cortex, mutations in the AMPA gene have been associated with autosomal dominant lateral temporal epilepsy. Affected individuals are typically men (62%-66%) with median age 64 to 66. AntiLGI1 have been identified in cases of limbic encephalitis, which often present with seizures, sudden changes in mental status, psychiatric symptoms, and anterograde amnesia.7 AntiLGI1 are associated with a highly specific phenomenon of faciobrachial dystonic seizures (FBDS) characterized by seconds-long stereotyped episodes of unilateral or bilateral arm posturing with facial grimacing that occurs up to hundreds of times per day.7 Clinically, these brief and dystonic-appearing movements are often confused with nonkinesiogenic dyskinesias, negative myoclonus, startle disorders, or other paroxysmal movement phenomenona. Typically, these movements are poorly responsive to antiseizure medications (ASMs). EEG monitoring can reveal underlying rhythmic activity, ictal temporal, or frontal epileptiform activity in many cases, but is unrevealing in more than half of cases. Difficulty identifying ictal correlates has led to competing proposals of this phenomenon as a paroxysmal movement disorder, hemidystonia, in the past. Currently, FBDS are recognized as an early and specific manifestation of antiLGI1-mediated disease that often precedes the more generic limbic encephalitis phenotype of behavioral change, memory disturbance, and progression to typical seizure activity.8 Peripheral nervous system (PNS) involvement has also been described, including neuropathic pain, muscle cramps, autonomic dysfunction, and gastrointestinal (GI) symptoms. In a retrospective analysis, people under age 50 with the disease have had more PNS involvement with the typical CNS manifestations being seen in the more commonly seen, and thus better described, cohort over age 50.9

Brain MRI has revealed T2 hyperintensity in the medial temporal lobe in more than 80% of cases, more commonly unilateral than bilateral; these lesions can extend into the amygdala, insula, or striatum.8 Analysis of CSF is typically unremarkable in up to 75% of patients.10 In a case series, 65% of individuals had hyponatremia during the acute symptomatic phase of illness.7 Although there are a few cases suggesting association with malignancy, the overall rate of neoplastic processes is less than 10%, and thymoma is the most common neoplastic comorbidity (<5%).11 Notably, testing specifically for antiLGI1 is far more informative than testing for the now outdated antiVGKC, which are found less specific for any given phenotype and do not robustly predict response to therapy. Serum testing by cell-based assay is highly sensitive for antiLGI1 compared with CSF analysis, which can be negative in nearly half of cases.6

The rate of clinical response to immunotherapy (96%-100%)—most often intravenous corticosteroids—is high, even with first-line treatment, although many individuals required further treatment with IV immunoglobulins (IVIG) or plasma exchange.9 In the majority of cases, maintenance immunotherapy is continued with persistent improvement. In a series of 61 cases, 59% of individuals had relapses, almost always (91%) in response to weaning or discontinuation of maintenance immunotherapy. The presence of cognitive symptoms and delayed initiation of immunotherapy has been shown to correlate negatively with functional status outcome, measured with the modified Rankin score (mRS) 2 years after onset.12

CASPR2 is a cell adhesion molecule expressed in the CNS and PNS that is necessary for proper localization of VGKCs adjacent to axonal nodes of Ranvier. AntiCASPR2s do not cause internalization of target or recruit immune complement; it is thought that pathogenicity of antiCASPR2 is a result of disrupted clustering of VGKCs that causes hyperexcitability of affected axons.13 In a review of 667 cases, 69% were men with a median age 54 and reported syndromes ranged from limbic encephalitis, seizures, peripheral nerve hyperexcitability, Morvan syndrome, and cerebellar syndromes.14

Brain MRI is abnormal in just 53% of cases with medial temporal lobe T2 hyperintensity being the most common abnormality and hippocampal atrophy, mesial temporal sclerosis, and hippocampal sclerosis also reported. Analysis of CSF is normal in nearly 60% of cases with the most common abnormalities being an elevated protein count or white blood cell pleocytosis. Epileptic abnormalities are seen on EEG in 47% of cases and otherwise focal or diffuse slowing is seen; however, in approximately 30% of cases, there are no EEG findings. Hyperexcitability is seen on EMG in two-thirds of cases. AntiCASPR2 are reliably detected in the serum, but present in CSF in around half of cases, which correlates with an increased prevalence of CNS-predominant phenotypes.14 Thymoma is the most commonly associated malignancy associated with antiCASPR2 (nearly 20% of cases), particularly in cases where isolated NMT or Morvan syndrome is present. Other less commonly reported malignancies include prostate cancer, lung adenocarcinoma, and melanoma.

Seizures are often less robustly responsive to immunotherapy alone and 75% of cases require 2 types of immunotherapy (typically centered between corticosteroids, IVIG, and plasma exchange). Treatment for as long as 14 months is often needed before seizure control is achieved.8 Generally, response rates are positive with at least two-thirds of individuals having improvement with immunotherapy.16 Failure to respond may correlate with worse structural deterioration, particularly in the temporal lobes, which may suggest a longer or more severe disease course. Cognitive recovery is often slower and more incomplete than resolution of seizures or other somatic manifestations. Similarly to LGI1, relapses seem largely predicted by rapid or early wean of immunosuppression.8

Dipeptidyl-peptidase-like protein-6 (DPP6 or DPPX) is a regulatory protein of the Kv4.2 potassium channel that is responsible for inhibitory currents in the CNS and PNS17 and is widely distributed in the CNS, including the hippocampus and cerebellum. In the PNS, DPPX is widely distributed in the myenteric plexus of the gut, explaining the multifocal clinical syndrome that involves the gastrointestinal system.17 AntiDPPX were first described in a series of 4 cases of encephalitis, and since, other case series suggest a wide range of age at onset (13 to 75 years) with a median age in the sixth decade.18 Onset is insidious in most cases but subacute in some. Significant weight loss and diarrhea preceding neurologic symptoms, which sometimes include mood changes or depression, by a few months is common.19 Other neuropsychiatric symptoms include memory loss, delirium, psychosis, and personality changes. Hyperexcitability manifests as tremor, myoclonus, hyperekplexia (increased startle response), muscle stiffness in the limbs or trunk, and seizures.19 Dysautonomias, cerebellar ataxia, and brainstem dysfunction characterized by diplopia, oscillopsia, dysphagia, and respiratory failure also occur. Sleep disorders, including insomnia, periodic limb movements, sleep apnea, and hypersomnia have been reported.18 Dysesthesias and intractable pruritus have also been seen.

Underlying lymphomas have been found in few cases.18,19 Some individuals with antiDPPX-associated disease have had other coexisting autoantibodies.18 Brain MRI is usually unremarkable. Analysis of CSF may be normal, but elevated white blood cell (WBC) counts and protein levels have been seen. Diffuse or focal slowing is often present on EEG. AntiDPPX can be detected in both serum and CSF and commercial testing is available. An autopsy finding in 1 person who had antiDPPX-associated disease showed CD8-predominant perivascular and parenchymal inflammatory infiltrates in the hippocampus, amygdala, and temporo-occipital cortex.20

Immunotherapies have been beneficial in most cases and various medications, including corticosteroids, azathioprine, and cyclophosphamide, have been used; rituximab has been successful as a second-line agent in some cases.19

Antibodies to kelch-like protein 11 (antiKLHL11) have been recently discovered in a person with testicular seminoma and subsequently, in 12 other cases with a clinical presentation of brainstem and cerebellar encephalitis.21 In another series, antiKLHL11 were found in 32 individuals with varying clinical syndromes, some of whom had coexisting autoantibodies to neurologic targets, including N-methyl-d-aspartate receptor (NMDAR) and Ma2.22 The age range at presentation varied from 9 to 76 years. Common neurologic presentations have included ataxia, cognitive decline, hearing loss, opsoclonus-myoclonus syndrome (See Opsoclonus-Myoclonus in this issue), limbic encephalitis, and psychosis.22 Brain MRI is usually abnormal with varied findings and CSF analysis shows elevated WBC count or protein levels.21 Both case series suggest association with tumors (ie, seminomas and ovarian teratomas). Testing for antiKLHL11 is not available commercially yet. The pathogenic mechanism is thought to be T-cell mediated because KLHL11 is intracellular.22 Further research will help determine the clinical significance of antiKLHL11; currently, there seems to be an overlap with other autoantibodies.

Newer autoantibodies are associated with many different types of movement disorders, sleep disturbances, epilepsy, hyperexcitability, and other syndromes. Testing for most of these antibodies is commercially available on autoimmune encephalopathy panels. Autoimmune encephalopathy should be considered as part of the work up for these syndromes after common causes are ruled out or when there is a symptom complex that fits the diagnoses discussed in this article. It is important to be aware of emerging antibodies because most of these syndromes are responsive to early immunotherapy, which may improve outcomes significantly, including complete resolution for some.

FSB and SPA report no disclosures

Department of Neurology
The University of Alabama at Birmingham
Birmingham, AL

Department of Neurology
The University of Alabama at Birmingham
Birmingham, AL