Metabolic strokes occur when decompensation of an underlying metabolic disorder caused by a stressor (eg, intercurrent illness or fasting) results in acute neurologic deficits. Individuals with metabolic disorders are at risk for classical thromboembolic arterial strokes, stroke-like episodes (SLE), and diffuse symmetric lesions (DSL) (Table). Clinicians providing care for those with underlying metabolic disorders who have known predisposition to metabolic stroke should maintain a high index of suspicion in the setting of acute neurologic change and act accordingly. Although there are few evidence-based practices for diagnosis and treatment, a prompt and thoughtful approach may minimize long-term sequelae of stroke episodes. 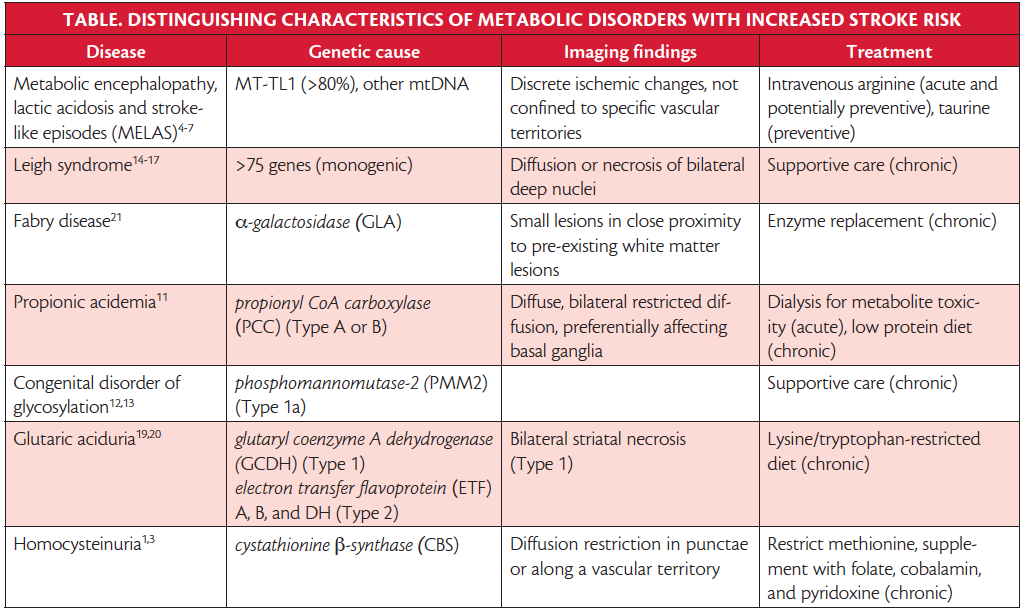 In homocystinuria, elevation of plasma homocysteine and methionine result in a predisposition to thromboembolic events, approximately 30% of which affect the nervous system.1 The classic form of homocystinuria is an autosomal recessive disorder caused primarily by missense variants in cystathionine β-synthase (CBS). These missense mutations reduce activity of cystathionine β-synthase, a pyridoxine (B6)-dependent enzyme critical for metabolism of dietary methionine. Homocystinuria can be identified on newborn screening and is also associated with intellectual disability, ectopia lentis, and skeletal abnormalities leading to a marfanoid habitus. A relative state of homocystinuria can also be acquired through severe cobalamin (vitamin B12) deficiency or other genetic/metabolic enzyme deficiencies in the same pathway (eg, MTHFR deficiency or cobalamin transporter deficiency). The enzyme deficiency results in elevated levels of serum homocysteine and methionine, conferring a relative hypercoagulable state, although how this leads to increased stroke risk remains unclear.2 Primary preventive strategies include folate, cobalamin, and pyridoxine supplementation and dietary restriction of methionine. Up to 50% of untreated individuals will have a life-altering thromboembolic event before age 30 that can be significantly reduced with appropriate dietary therapy—underscoring the need for prompt identification and treatment.3 Further research into the causal relationship between homocysteine metabolism and thromboembolic stroke is needed.

Disorders of Mitochondrial DNA. Metabolic encephalopathy, lactic acidosis and stroke-like episodes (MELAS) is the prototypical metabolic disorder that presents with acute metabolic stroke. In approximately 80% of cases, MELAS is caused by a missense variant of the MT-TL1 mitochondrial gene (m.A3243G). The remainder of cases are caused by other variants in MT-TL1 or in other mitochondrial genes.4 The mechanism of injury in MELAS is reversed from traditional arterial stroke; instead of poor blood flow causing brain injury, brain tissue involved in a metabolic stroke is stressed by increased metabolic demand (eg, febrile illness), and localized swelling secondarily restricts blood flow, resulting in further ischemic injury. As such, the SLE lesions seen in MELAS typically do not conform to a vascular territory.5 A primary diagnostic criterion for MELAS is the presence of SLE on MRI, because over 90% of people with MELAS will experience SLE during their lifetime (Figure 1). Seizures often occur in conjunction with SLE and may be difficult to control. As increased blood flow and electrical hypersynchrony escalate metabolic demand, further stressing and extending the injured area, seizure activity can spread and persist in tissue along the penumbra. 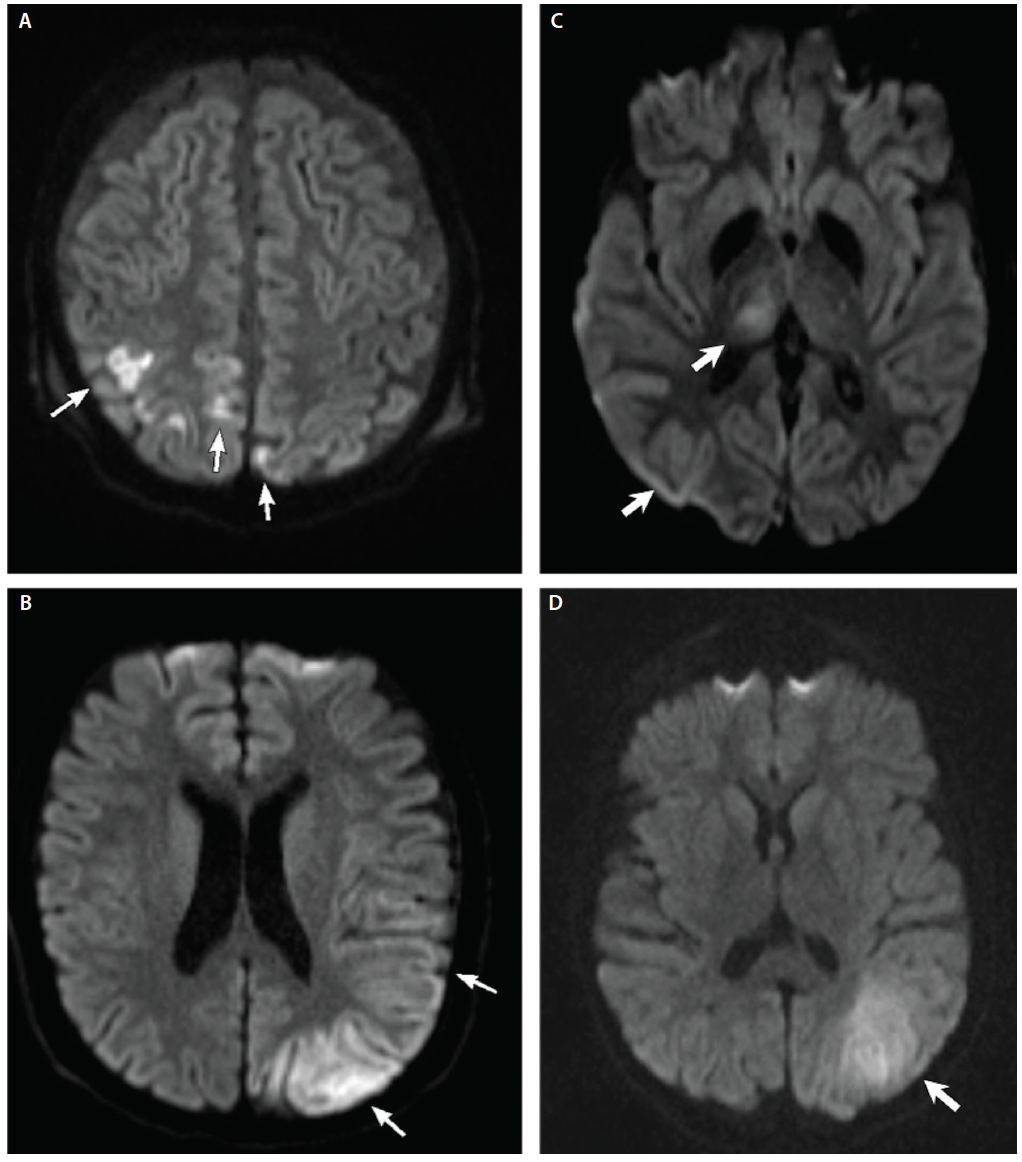 Figure 1. Imaging Findings for Stroke-Like Episodes. Stroke-like episodes (SLE) in metabolic encephalopathy, lactic acidosis and stroke-like episodes (MELAS) (A, B) and congenital disorder of glycosylation type 1a (PMM2-CDG) (C, D). Separate instances of SLE in the same person are shown. Axial diffusion-weighted imaging shows bright areas (white arrows) indicating acute injury. Lesions are not restricted to vascular territories. For MELAS, both lesions are in cortical gray matter, but for PMM2-CDG both superficial and deep gray are involved.

Acute treatment of SLE in MELAS, as with most metabolic disorders, remains focused on identifying and managing stressors such as infections or seizures. An aspect of SLE may be related to poor vasodilation, which some have suggested can be addressed by providing nitric oxide precursors like arginine. Data for intravenous arginine as a specific therapy for SLE in MELAS comes from a 9-year prospective study that has shown strong potential.6 Arginine was administered urgently during periods of neurologic decline with MRI-confirmed SLE. Treatment reduced seizure intensity and frequency during acute illness. Arginine also appeared to decrease headaches, visual disturbances, and impaired consciousness. There were no long-term consequences directly attributable to arginine, although cases progressed similarly to the natural history of MELAS.6

Chronic management of MELAS with appropriate antiseizure medications (ASMs) and infection prophylaxis remains the best approach to avoiding SLEs. Because the pathogenic m.A3243G variant may undergo posttranslational modification by taurine in healthy individuals, a study investigated taurine supplementation to determine if this might prevent metabolic decompensation for MELAS patients. The study was an open-label 52-week study and demonstrated reduction in the frequency of clinically defined strokes for participants who had 2 or more strokes in the 1.5 years before the study. No significant acute or long-term side effects were noted.7

Disorders of Nuclear DNA. People with almost any form of mitochondrial disease, including those of nuclear genetic etiology, may develop SLE.5 The most common, although still rare, are SLE-associated with genetic variants in DNA polymerase γ (POLG1), a gene more classically linked to intractable epilepsy in Alpers-Huttenlocher syndrome (POLG1).8 The fact that SLE universally occur during periods of metabolic decompensation underscores the importance of aggressive fluid and glucose management as well as avoidance of any drugs toxic to mitochondria and that may precipitate iatrogenic SLE.9 If a mitochondrial syndrome is suspected, the genetic etiology may be less important than recognizing the need for acute management.

Propionic Acidemia. Generally identified in infancy because of vomiting, lethargy, and hypotonia, propionic acidemia is caused by defects in propionyl CoA carboxylase (PCC), a key enzyme in breaking down amino acids. Once identified, propionic acidemia is treated with a low protein diet. In rare cases, metabolic decompensation may present as a focal neurologic deficit or change in mental status suggestive of a stroke.10 Typical imaging findings show bilateral basal ganglia lesions, but lesions may also be seen in the bilateral cortex or subcortical white matter.11 Central goals of care include fluid resuscitation, electrolyte balance, and, if needed, dialysis to remove buildup of propionic acid and secondary hyperammonemia.

Congenital Disorder of Glycosylation Type 1a. Caused by deficiency of phosphomannomutase-2 (PMM2-CDG), congenital disorder of glycosylation type 1a is the most common congenital disorder of glycosylation. A wide variety of neurologic phenotypes are associated with PMM2-CDG, including SLE presenting as focal weakness in 15% to 50% of cases. Some studies have shown MRI to be negative in a majority of patients, but when present, MRI findings have focal diffusion restriction akin to MELAS.12,13 A broad differential is needed to identify treatable triggers for each presentation, because in addition to head trauma and infection, there may be hypoglycemia in a fasting state, coagulopathy if liver dysfunction is present, or susceptibility to seizures.13

Leigh Syndrome. The most common form of pediatric mitochondrial disease, Leigh syndrome (LS) is characterized by psychomotor regression, seizures, respiratory failure, and bilateral diffuse ischemic lesions on MRI.14 Also termed subacute necrotizing encephalopathy, LS is most often caused by pathogenic variants in nuclear genes in an autosomal recessive pattern. There is significant genetic and phenotypic variability, however, with over 75 monogenic causes and few reliable genotype-phenotype correlations.15 The neurologic symptoms of LS are often severe early life phenotypes, including rapid neurodegeneration and intractable epilepsy.16

Symmetric MRI findings include diffusion-restricted lesions that have a predilection for the basal ganglia, brainstem, and cerebellum (Figure 2). During acute illness, there are often new neurologic findings as well as progression of previous MRI abnormalities that can culminate in bilateral necrotic lesions of the deep gray nuclei. Of note, arterial spin labeling shows a counterintuitive hyperperfusion within lesions,17 perhaps signifying a state of increased metabolic demand more substantial than cytotoxic edema. During acute periods of neurologic injury, fluid support, metabolic support and treatment of underlying triggers is crucial. At present there are no mitochondrial-targeted therapies, and there remains no evidence for the use of arginine in the acute management of LS. 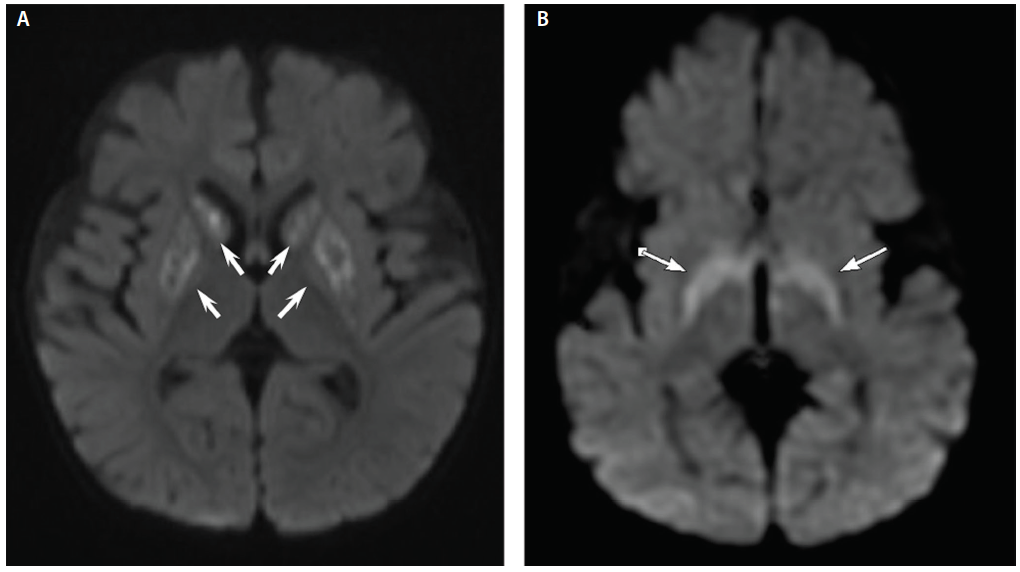 Glutaric Aciduria. A progressive autosomal recessive disorder, glutaric aciduria is characterized by macrocephaly with delayed development, punctuated by periods of severe metabolic decompensation resulting in hypotonia, encephalopathy, and seizures.18 The genetic deficiency is in glutaryl coenzyme A dehydrogenase< (GCDH), a mitochondrial matrix protein. Absence of GCDH causes a selective abnormality amino acid metabolism resulting in buildup of glutaric acid. Dietary management is crucial, including avoidance of lysine- and tryptophan-containing foods and supplementation with L-carnitine. For unclear reasons, the striatum is at particular risk and undergoes necrotic changes that are notable on MRI (Figure 2). Retrospective studies have suggested that the selective vulnerability of the striatum may be evident on imaging even before clinical symptoms are present.19

Glutaric aciduria type 2 is an autosomal recessive disorder of fatty acid β-oxidation and amino acid metabolism caused by impaired assembly of the electron transfer flavoprotein (ETF), another mitochondrial matrix protein. It is significantly more rare than type 1 disease, although strokes have also been reported in children.20 Treatment is empiric, consisting of a high-carbohydrate diet and carnitine supplementation.

Fabry disease is characterized by extensive, symmetric white matter injury due to an X-linked disorder of sphingolipid metabolism People with Fabry disease carry a variant in α-galactosidase (GLA) resulting in impaired lysosomal function and sphingolipid accumulation. The course is variable, and the most common clinical presentation is pain crisis. Given normal life expectancy, a variety of symptoms do not present until later in life. Stroke is one such symptom, which has median age of first occurrence around age 40 and affects approximately 5% of all individuals with Fabry disease, requiring a workup that includes sequencing of GLA. Findings on MRI usually demonstrate extensive white matter lesions at baseline, and individuals with a new, acute neurologic deficit may only demonstrate progression of the white matter lesions. Rarely, there may be subtle new imaging findings, but large new asymmetric lesions are rare. Acute therapy should again be focused on stabilizing metabolism, along with fluid and electrolyte management. For chronic treatment, enzyme replacement therapy may be an option.

Metabolic stroke is a high-morbidity complication for many metabolic disorders. Prompt appropriate metabolic support and supportive care are necessary to minimize long-term sequelae. Practitioners should maintain a high index of suspicion for SLE if people with metabolic disease present with acute neurologic deficits or depressed mental status. For those with variants in MT-TL1, in addition to correction of fluid and electrolyte imbalances and addressing metabolic stressors, consideration is also warranted for both acute and chronic treatment with amino acid therapy, based on availability, feasibility, and physician comfort. Thromboembolic and diffuse symmetric lesions are also complications of metabolic disorders and should be on the differential for acute neurologic symptoms. Familiarity with the differences between stroke subtypes associated with specific diseases may aid in rapid diagnosis and treatment. Long-term prevention is directly related to disease-specific treatments, but significant research is still needed to identify efficacious therapies for most metabolic disorders.

DM and TG report no disclosures