Vitamin B12-deficiency was precipitated by nitrous oxide in a child with autism.

JC is a boy, age 14 with autism spectrum disorder, eosinophilic gastroenteritis, multiple food allergies, asthma, and constipation. He presented with a 2-week history of progressive difficulty standing and walking. Approximately 2 weeks before, his family noticed he seemed to stomp when walking and drag his feet. Over a few days, this progressed to difficulty standing up to walk and needing assistance when walking. At presentation, JC was unable to stand or walk without assistance.

On further history, his parents reported that a few days after the initial onset of symptoms, he had an esophagogastroduodenoscopy (EGD) for routine monitoring of eosinophilic gastroenteritis. As anesthesia, JC had received nitrous oxide for 10 minutes, sevoflurane for 5 minutes, and 100 mg propofol. The EGD showed mildly active esophagitis. His recent history was otherwise remarkable for an acute worsening of his baseline constipation, with a decrease in stool frequency over the past month to weekly bowel movements. Beyond this, they reported no urinary incontinence, recent fevers, recent upper respiratory tract infection symptoms, trauma, diarrhea, or vomiting. 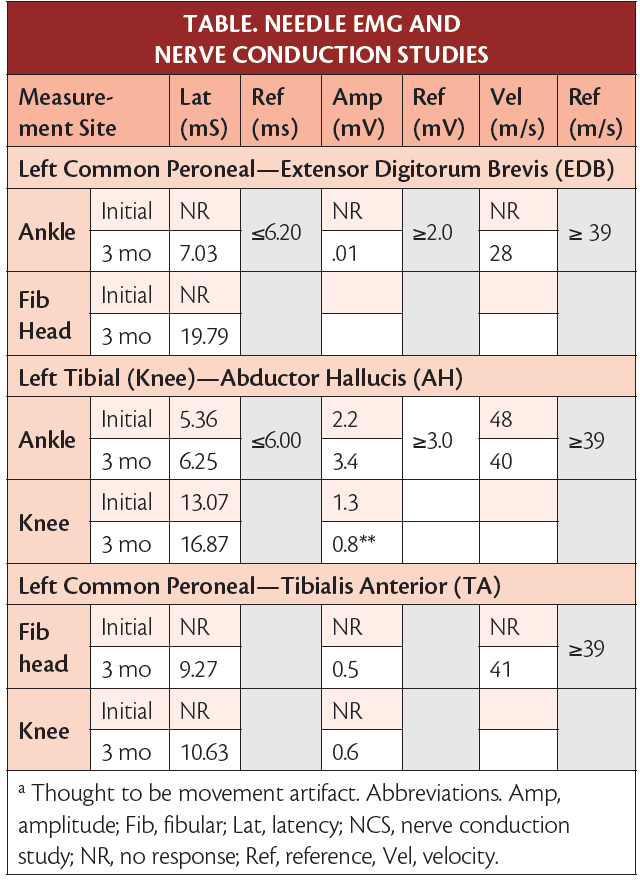 Based on these findings, JC was diagnosed with a severe neuropathy owing to vitamin B12 deficiency. His vitamin B12 deficiency was thought to be acutely worsened by nitrous oxide exposure, because routine screening of the vitamin B12 level taken just before anesthesia was already low (187 pg / mL). Intramuscular (IM) cyanocobalamin 1,000 mcg was given daily for 3 days and then weekly. This led to improvement of B12 level to 1,793 pg/mL.

Gastroenterology, clinical nutrition, and biochemical genetics teams were consulted to understand the etiology of JC’s vitamin B12 deficiency. There were no signs of malabsorption. Exome sequencing and mitochondrial genome testing showed no variants consistent with genetic disorders of cobalamin metabolism or hereditary neuropathies. Therefore, JC’s vitamin B12 deficiency was thought to be secondary to insufficient dietary intake. This was corroborated by a parent-reported history of a diet low in meat and dairy intake; JC’s diet was significantly restricted by food allergies and limited food preferences.

Gait training was provided to JC in an inpatient rehabilitation setting, and gabapentin 1,800 mg/day in 3 divided doses was given out of concern for neuropathic pain because of agitation during therapy sessions. Although JC’s oral intake was optimized, he eventually required a gastric tube because of his severely restrictive diet. He was transitioned to monthly intramuscular vitamin B12 1,000 mcg injections and enteral supplements of thiamine, folate, zinc, multivitamin, and vitamin D 5,000 U daily. His vitamin B12 level was stable at 861 pg/mL with normal methylmalonic acid (346 nMol/L) on this regimen. At a follow-up appointment approximately 3 months after symptom onset, JC’s bilateral lower extremity strength had improved. He was able to give resistance with flexion and extension at the knees, and there was slight bilateral ankle dorsiflexion noted. Electrophysiologic studies were repeated and demonstrated improvement (Table). He continues to make gains with physical therapy, and at the most recent therapy visit 5 months after symptom onset, JC was able to walk short distances with minimal assistance.

Children with autism spectrum disorders are at increased risk of having nutritional deficiencies.1,2 This is frequently because of food selectivity and food refusal, need for food to be given in specific presentations and/or textures, preference for certain food groups, and atypical sensory processing.3-6 Multiple vitamin deficiencies can result, including vitamin B12, vitamin B6, folate, and vitamin D deficiencies.1

Vitamin B12 deficiency can present with neurologic manifestations including subacute combined degeneration of the spinal cord, peripheral neuropathy, optic neuropathy, ataxia, cognitive disturbances, and mood changes, in addition to megaloblastic anemia.7-9 The deficiency is typically diagnosed by low serum vitamin B12 levels in conjunction with high homocysteine and high methylmalonic acid levels.7 In this case, an adolescent boy with autism had a severely restricted diet leading to vitamin B12 deficiency that caused a severe sensory and motor axonal neuropathy. A pre-existing vitamin B12 deficiency was further worsened by exposure to nitrous oxide that accelerated the progression of his weakness.

Food restriction is commonly seen in children with autism10 and if severe, can lead to multiple vitamin deficiencies associated with neurologic disease. This disordered food intake is largely attributed to abnormal sensory processing.5 JC’s diet largely consisted of butternut squash, apple sauce, quinoa and corn pasta, spaghetti sauce, and wax beans. His food restriction was compounded by multiple food allergies. His diet was low in animal products, including meat and dairy, which are sources of vitamin B12. This is consistent with a recent meta-analysis demonstrating that children with autism consume less protein, calcium, phosphorous, vitamin D, thiamine, riboflavin, and vitamin B12 compared with typically developing children.2 Children with autism have a lower serum vitamin B12 levels and higher homocysteine levels compared with typically developing children.1 There may even be a correlation between severity of autism and the degree of vitamin B12 deficiency.1 Although prior studies have found no consistent effect,11 a recent randomized controlled study showed that improving nutritional intake in children with autism can reduce vitamin and mineral deficiencies and actually improve autism symptoms.12 The case presented here highlights the importance of surveillance nutritional testing in children with disordered eating.

Nitrous oxide precipitating a severe neuropathy in people with vitamin B12 deficiency was first noted in the 1980s.13 Vitamin B12 functions as a cofactor for methylmalonyl-CoA mutase, which promotes the production of succinyl-CoA, and methionine synthase, which promotes the production of methionine from homocysteine.14 Nitrous oxide inhibits methionine synthetase, which can lead to disruption of fatty-acid metabolism required for myelination and synthesis of cellular plasma membranes.14 This underscores the importance of avoiding use of nitrous oxide as an anesthetic in people at risk for vitamin B12 deficiency.

In children, especially those who are nonverbal or have autism, neurologic symptoms can progress substantially before a deficit is noticed by care providers. Vitamin B12 deficiency caused optic nerve atrophy leading to vision loss in 3 children with autism who had restrictive diets.8 Supplementation of vitamin B12 led to improved vision in all 3 children. In a randomized placebo-controlled trial (n=50), children who received vitamin B12 supplementation had improvements in autism symptoms as evaluated by a clinician. These improvements were attributed to an improved metabolic profile and decreased oxidative stress.15 Thus, as demonstrated in the current case, early detection of neurologic deficits is critical because they may be at least partially vitamin B12 supplementation can at least partially reverse neurologic deficits.

Children and adolescents with autism may have severely restricted diets that can cause nutritional deficiencies. In the case presented, JC had a vitamin B12 deficiency that was worsened with nitrous oxide anesthesia, leading to severe peripheral neuropathy. He had a 2-week decline in walking. This case highlights that children with autism spectrum disorder and food restrictions should have nutritional surveillance. We also highlight that nitrous oxide anesthesia should not be used in individuals who are at risk of vitamin B12 deficiency. Early diagnosis, which can be challenging in children who are nonverbal or have autism, is crucial because vitamin B12 supplementation can reverse neurologic deficits.

VAC, SM, and DS report no disclosures
SWY received honoraria for serving on the on scientific advisory board for PTC Therapeutics, Stealth Biotherapeutics, and Sarepta Therapeutics
BLB serves as an unpaid advisor to Novartis, Sanofi, Celgene, Teva Neuroscience, and Biogen and has received speaker honoraria from Medscape and TriMS.