A practical approach to treatable causes.

Seizures in the neonatal period are often the first sign of neurologic dysfunction in this age group and have significant implications for long-term cognition, learning, behavior, and motor development. Although several factors may affect prognosis, such as the seizures themselves and their physiologic consequences, the overriding contributor to long-term prognosis is seizure etiology. Therefore, early identification of the cause of seizures and initiation of etiologic-specific treatment are vital, both to control seizures and improve outcomes. The neonatal period is generally defined as the first 28 days of life in a full-term infant. In preterm infants, the period is defined either as up to 44 weeks conceptional age (chronological age plus gestational age) or 46 weeks postmenstrual age (PMA). Within this period, a number of metabolic disorders become apparent and may manifest as neonatal seizures. In this article, we review some of these metabolic disorders, an approach to their diagnosis, and the institution of etiologic-specific treatments.

Neonatal seizures are characterized by a wide range and combination of clinical features. There have been several proposed classifications of clinical neonatal seizures that commonly include these seizure types: focal clonic, focal tonic, myoclonic, spasms, and automatisms (such as eye movements, oral-buccal-lingual movements, and limb movements of progression).1-3 The clinical diagnosis of neonatal seizures is made more difficult because the events often differ in character from that seen later in infancy and childhood. In addition, some clinical events that appear concerning for seizure-like behavior may be nonepileptic in origin (eg, some myoclonic events, generalized body posturing, some limb movements, and some autonomic signs). Therefore, whenever possible, the evaluation of an infant with suspected seizures should include EEG in order to verify whether questionable events are of epileptic origin. In addition, more recent recommendations suggest infants at risk for seizures be evaluated with long-term monitoring (LTM) with EEG and video for seizure surveillance and characterization and classification of any recorded events.4 The application of these guidelines has led to the understanding that many newborns who are ill and at risk for seizures may have electrographic seizure activity with no clinical changes (subclinical seizures).5

Identification of the underlying cause may lead to the effective treatment of neonatal seizures, because in some cases without etiologic-specific therapy, the use of antiseizure medications (ASMs) may be ineffective. Broad etiologic categories are listed in the Box. For some infants, more than 1 factor may play a role.6

After a careful history and physical examination, the initial evaluation is directed towards screening for these broad categories of etiologies (Figure). The infant is first stabilized in terms of airway protection and access to circulation and then evaluated with basic laboratory studies: complete blood count and complete metabolic panel (including sodium, glucose, calcium, magnesium, and phosphate). This allows for the identification of potential acutely treatable disorders, including hypoglycemia, hyper/hyponatremia, hypocalcemia, and hypomagnesemia.7 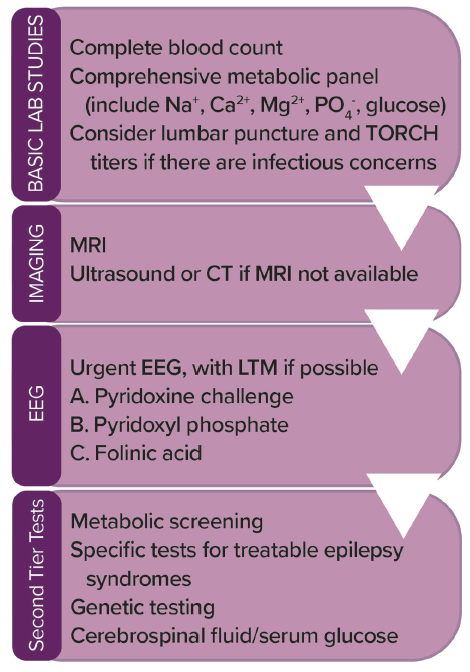 Urgent head imaging, especially in cases of focal deficit and depressed mental status is performed. Although MRI is the preferred imaging modality, head ultrasound or CT may be used as alternatives. An urgent EEG, ideally transitioning to LTM should also be initiated. When seizure etiology is not quickly identified with these initial tests, additional evaluations become necessary to identify nonstructural causes of neonatal seizures including lumbar puncture and analysis of cerebrospinal fluid (CSF)(Table). The lumbar puncture should be planned to include not only routine cell counts, chemistries and cultures but also specific assays for metabolic disorders discussed below.

It is helpful to determine early in the management of neonatal seizures whether the clinical events are part of an epileptic syndrome. This can provide insight into etiology, treatment, and prognosis. The International League Against Epilepsy has identified a limited number of neonatal epileptic syndromes.8

Benign familial neonatal epilepsy has an early onset, typically by day 2 to 3 of life, and is associated with a familial history of neonatal seizures. It is caused by autosomal dominant mutations with incomplete penetrance seen in the genes encoding potassium channels KCNQ2 and KCNQ3. The clinical presentation may include a wide array of seizure semiologies including focal clonic or focal tonic seizures, and may also include apnea, facial movements, spasms, myoclonus, or generalized events. The seizures are typically self-limited and the syndrome is associated with a good outcome.

The early-onset epileptic encephalopathies are often categorized by their clinical features as early infantile epileptic encephalopathy (EIEE) (Ohtahara syndrome) and early myoclonic encephalopathy (EME).9 Both may begin in the neonatal period, although EIEE more typically has onset in early infancy. Clinical features of the seizures are helpful for diagnosis because EME is associated with initial fragmentary myoclonic seizures whereas EIEE is more likely to present initially with tonic spasms. Both are associated with a suppression burst pattern on EEG and there is a suggestion that in EME, it is most prominent in sleep and in EIEE, the pattern is present in both wakefulness and sleep. Traditionally, EME is most often associated with metabolic disorders and EIEE has classically been associated with structural brain abnormalities. However, there is a more recent recognition that EME and EIEE have overlapping etiologies, particularly the genetic mutations seen in both.10 In addition, both may show progression to West syndrome and Lennox-Gastaut syndrome (LGS), and ultimately result in poor prognosis.

Once these syndromes of epileptic encephalopathy are identified, further evaluation may guide treatment and determination of prognosis. This is also the case with infants with nonsyndromic neonatal seizures and no structural or routine metabolic abnormality identified with initial testing. In these cases, follow-up testing may identify inborn errors of metabolism or genetic etiologies that may lead to targeted therapies.

Some infants with suspected epileptic encephalopathies with or without a suppression burst EEG pattern may have a KCNQ2 or KCNQ3 mutation.11 Although this constellation of mutations is often associated with self-limited benign familial neonatal seizures, it can also be associated with these more severe clinical conditions. It is important to identify this etiology in these infants because there are emerging therapies (eg, channel-opening agents) that may significantly alter outcomes.12,13

The most common presentation of inborn errors of metabolism in the newborn period is that of encephalopathy or appearance of decreased responsiveness, poor feeding, lethargy, respiratory complications, and seizures. A wide array of conditions may cause these findings, and therefore in addition to the baseline screening laboratory testing, second-tier testing is needed (Table). This includes baseline lactate and ammonia serum levels as screening tests to aid in identifying organic acidurias, fatty acid oxidation defects, or urea cycle defects, many of which can be treated with dietary modifications. Urea cycle disorders are typically suspected in cases of significant hyperammonemia, whereas plasma levels of acylcarnitine, amino acids, and urine organic acids can also help to identify additional inborn errors of metabolism.14,15

Evaluation for glucose transporter type 1 (GLUT1) deficiency defects may be performed by measuring glucose levels simultaneously in the CSF and serum. In GLUT-1 deficiency, defects in glucose transport reduce glucose entry to the brain, resulting in central hypoglycemia with normal peripheral glucose. A decreased CSF-to-plasma ratio of less than 0.5 is diagnostic and can then be confirmed by specific genetic testing for mutations in the SLC2A1 gene. With accurate diagnosis, the ketogenic diet is an effective therapy.

Pyridoxine-dependent epilepsy may present with isolated neonatal seizures. The disorder is refractory to ASMs but responsive to pyridoxine (vitamin B6) supplementation. A pyridoxine challenge is often done (typically during free-running EEG) with the expectation of seizure cessation, although the response may not be immediate. Therefore, testing for accumulated biochemical markers can be performed, including urinary, plasma, and CSF α-aminoadipic semialdehyde (AASA), or pipecolic acid. Specimens should be collected before any pyridoxine supplementation is given. When screening tests are positive, confirmatory testing for the ALDH7A1 gene may be performed. Following confirmation, pyridoxine should be administered simultaneously with folinic acid in order to treat potential folinic-acid–responsive seizures, because the 2 syndromes are often indistinguishable biochemically.16

A deficiency in enzymes involved in creatine synthesis and transport is most often associated with developmental delay and hypotonia in the first year of life. Although neonatal seizures are not necessarily a hallmark of these disorders, it is vital to identify these defects early in life because creatine supplementation is an effective treatment. Screening tests for creatine deficiency include serum and urine levels of creatine and guanidinoacetate.

An additional step in neonatal seizure evaluation is the consideration of genetic testing, particularly when other aspects of the evaluation are unrevealing. An important caveat in genetic testing is that many panels or exomes may take weeks to months for results to be reported. If a specific diagnosis is suspected based on clinical and other diagnostic information, a single gene test may be sufficient. However, in the majority of cases of isolated neonatal seizures or epileptic encephalopathy of a yet-unknown cause, a seizure panel is more likely to be beneficial. Most commercially available infantile and neonatal seizure panels have 200 to 300 genes included and continue to be more comprehensive as new heritable and de novo conditions are discovered. Alternatively, in the case of a neonate with abnormalities in multiple organ systems, a broader genetic screening approach such as a chromosomal microarray analysis (CMA) and trio-based whole-exome sequencing may be more helpful than a more targeted seizure gene panel.

This discussion is not exhaustive but rather serves as a starting point for assessing etiologies of neonatal seizures, with a focus on evaluating potential inborn errors of metabolism. There are many other conditions, including congenital disorders of glycosylation, peroxisomal disorders, urea cycle defects, organic acidemias, and amino-acidopathies that are beyond the scope of this review (Table).17 In addition, all infants should have a newborn screen performed in accordance with respective state regulations, although often results of these screens may not be available at the onset of symptoms.

Given the potential high stakes of neurodevelopmental delay that may be associated with neonatal seizures, it is important to try to determine the underlying cause of neurologic dysfunction in these infants. There are many tests that can be obtained quickly to diagnose conditions with known therapeutic options. After initial testing with basic laboratory assays, neuroimaging, and EEG, further testing with metabolic and/or genetic screening should be considered to determine whether etiologic-specific therapies will be of benefit.

3. Pressler RM, Cillo MR, Mizrahi EM, et al. The ILAE classification of seizures & the epilepsies: modification for seizures in the neonate. Proposal from the ILAE Task Force on Neonatal Seizures. Epilepsia 2020; In Press.

8. Berg AT, Berkovic SF, Brodie MJ, et al. Revised terminology and concepts for organization of seizures and epilepsies: report of the ILAE Commission on Classification and Terminology, 2005-2009. Epilepsia. 2010;51(4):676-685.

DST and EMM report no disclosures